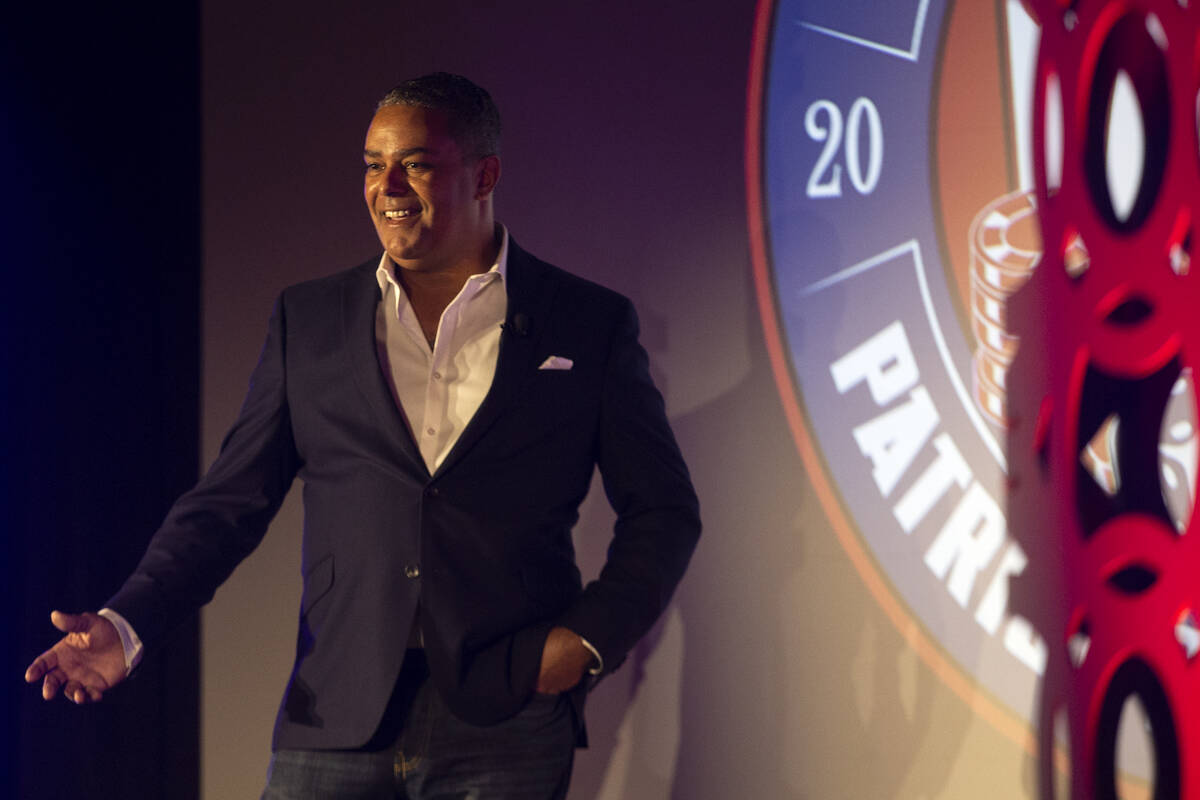 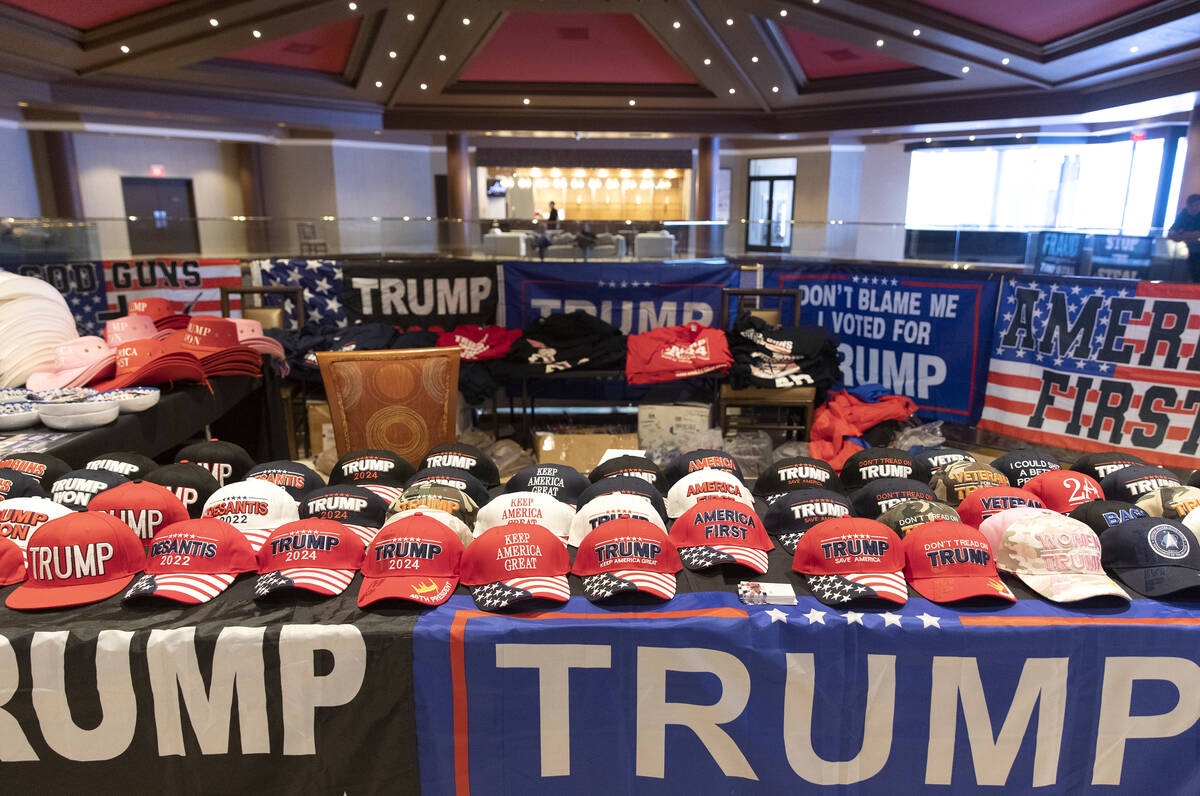 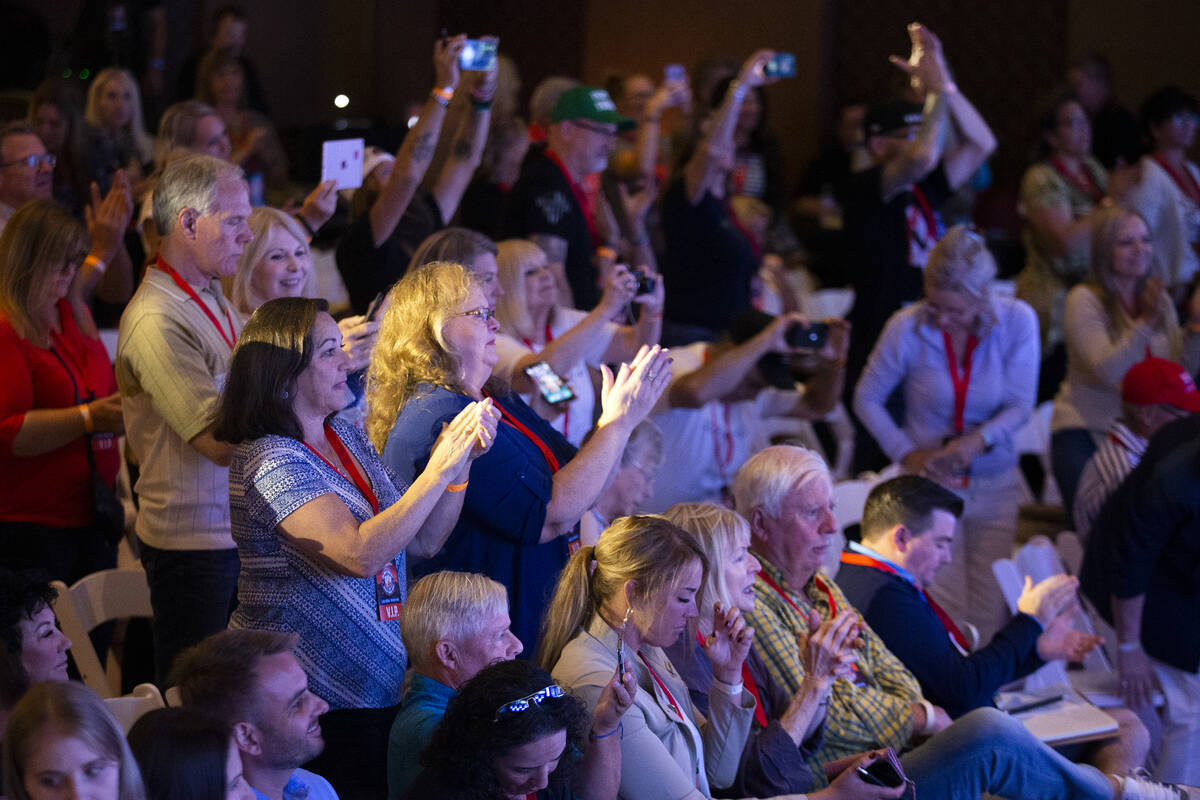 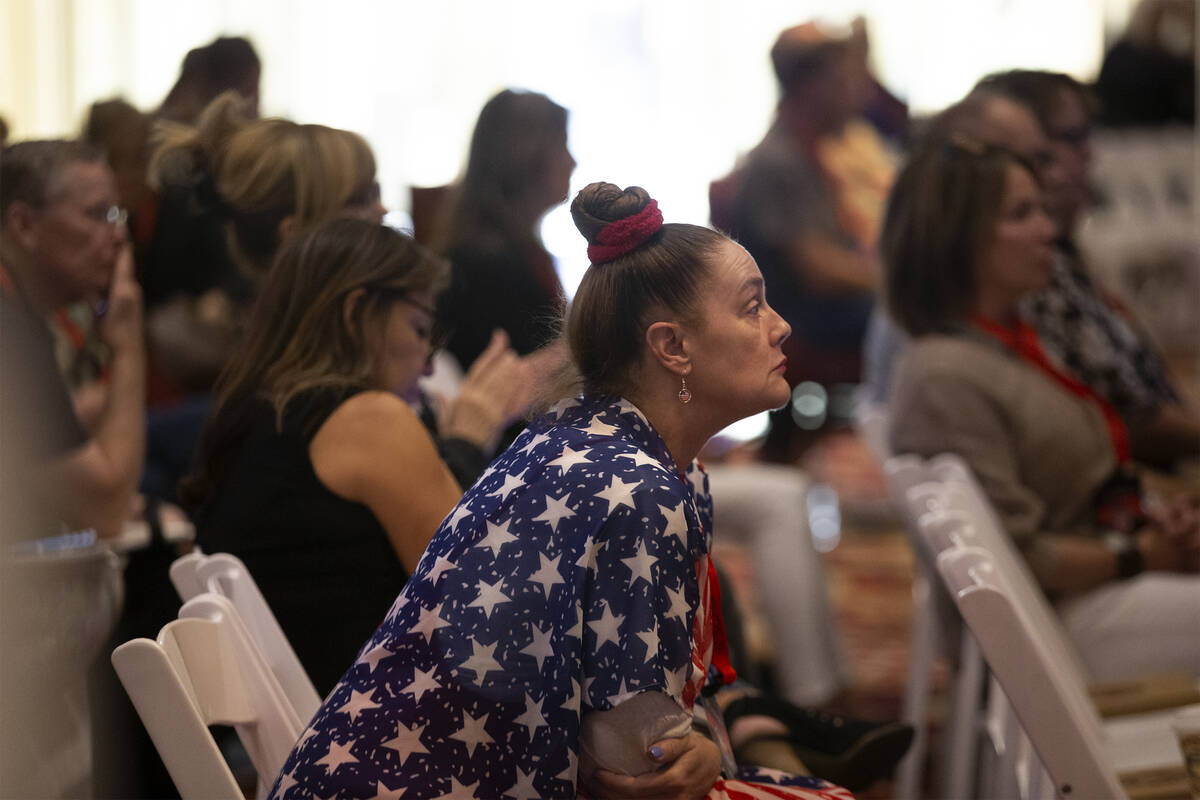 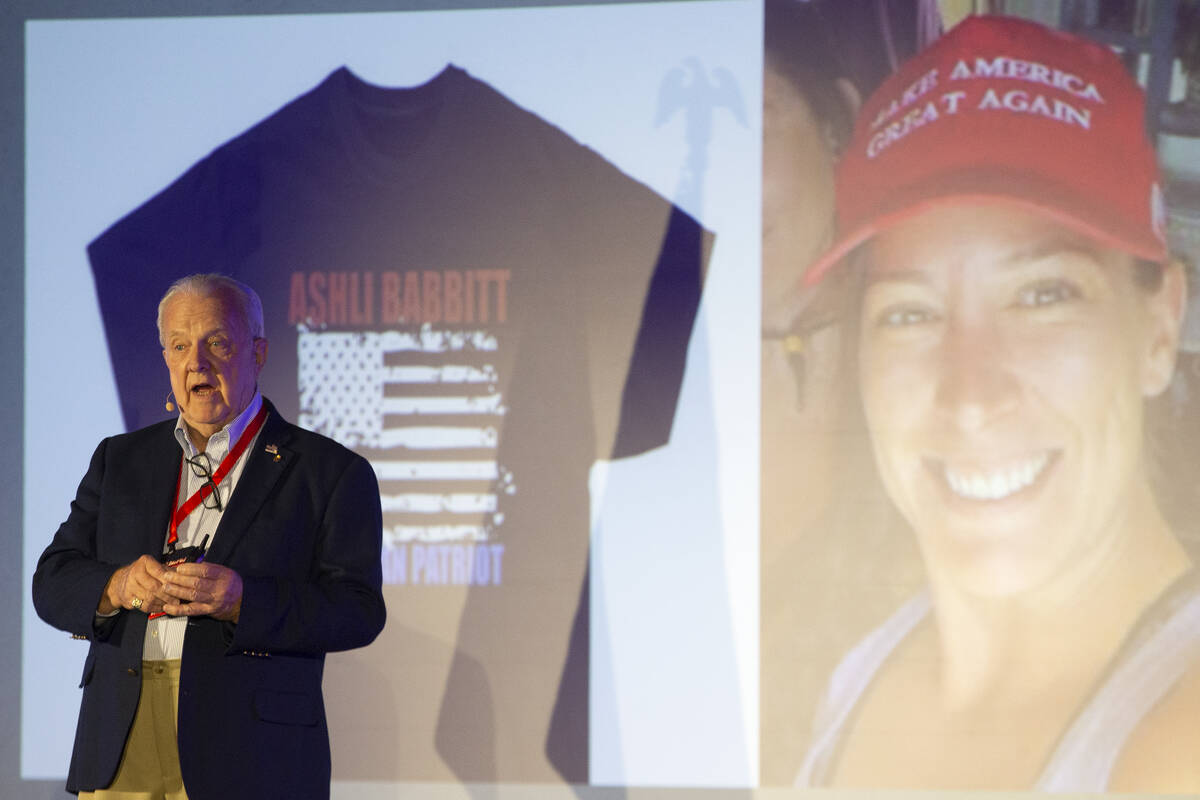 Kirk Wiebe, an Air Force veteran and former senior analyst for the NSA, speaks during the Qanon-linked Patriot Voice convention at Ahern Hotel on Saturday, Oct. 23, 2021, in Las Vegas. Pictured behind him is Ashli Babbitt, a woman who was shot and killed during the Jan. 6 insurrection at the Capitol in Washington, D.C. (Ellen Schmidt/Las Vegas Review-Journal) @ellenschmidttt 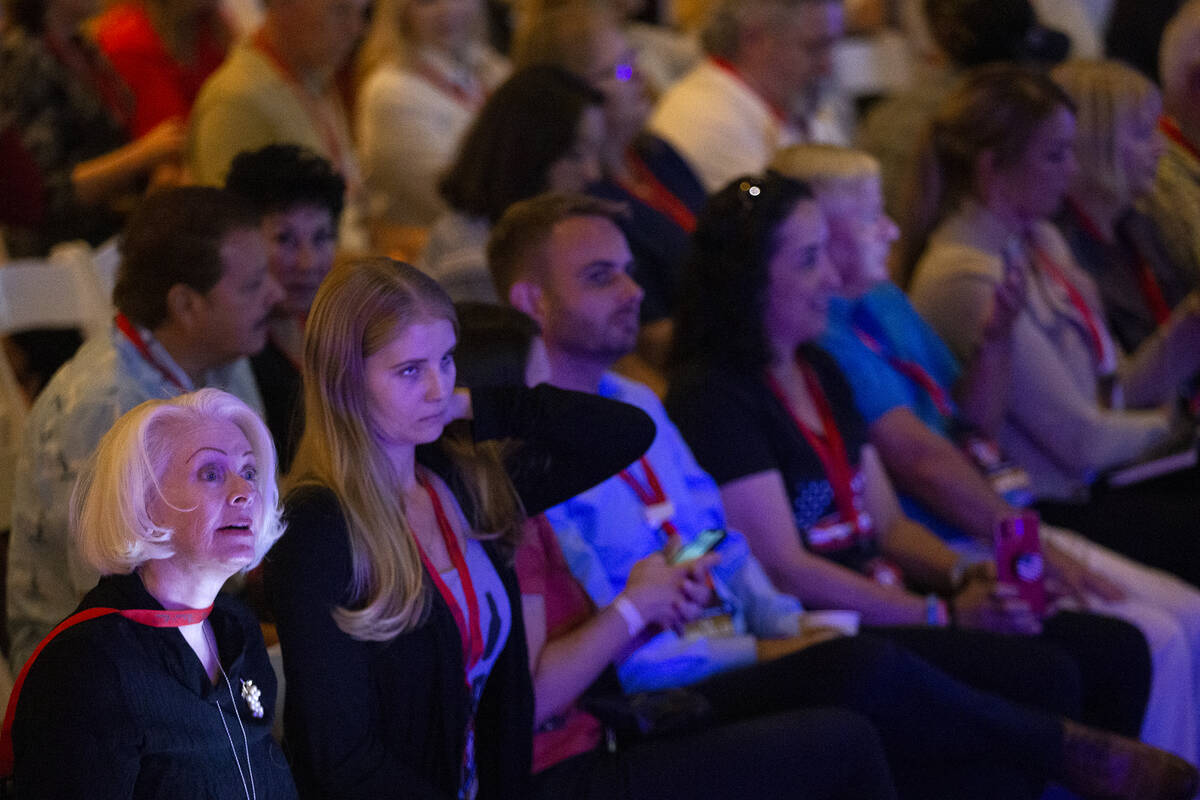 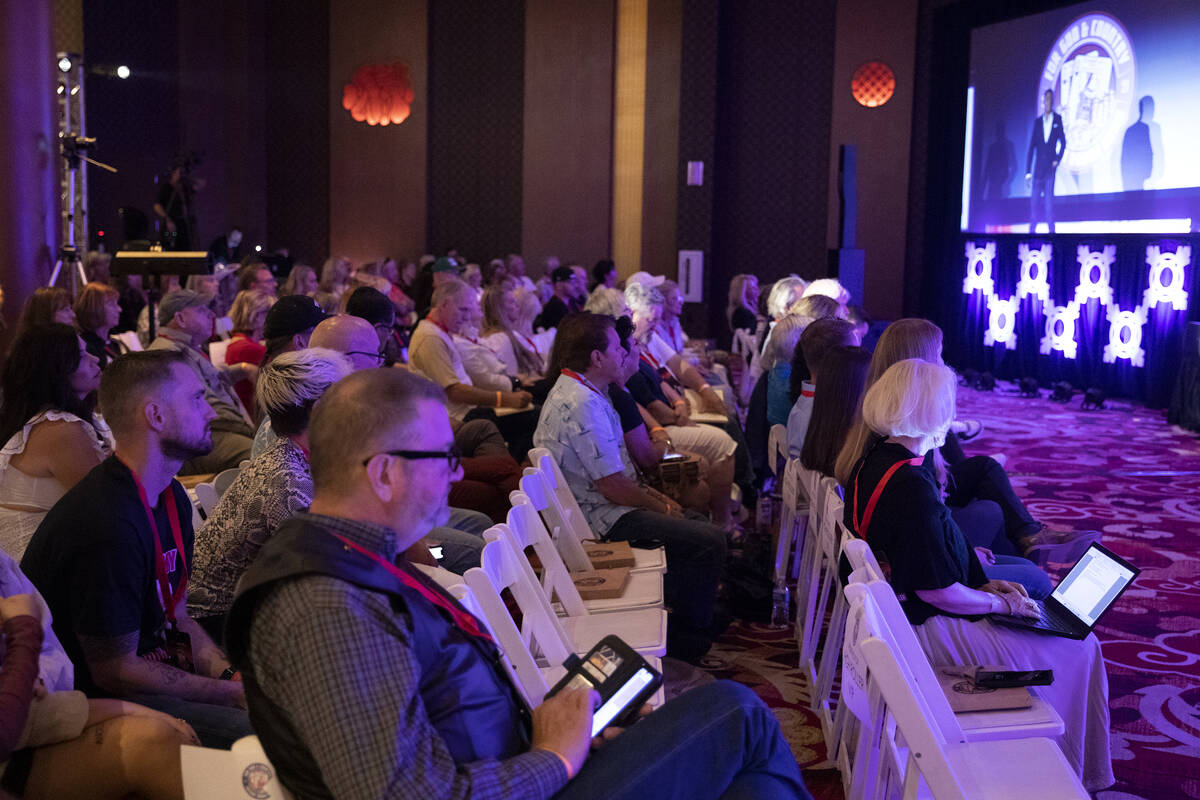 The QAnon-linked convention that kicked off in Las Vegas on Friday has served up misinformation on the predictable topics.

On Saturday, speakers at the For God and Country Patriot Double Down event riled the couple hundred people who showed up to the Ahern Hotel by spouting unfounded claims of widespread fraud in the 2020 election and casting doubt on COVID-19 vaccines.

“We know there was election fraud, are you kidding?” said Jason Sullivan, a social media strategist for Donald Trump’s 2016 presidential campaign. “We’re done trying to prove that it happened. We’re about to turn it around.”

Others will have to prove they provided a secure election system, he told attendees. Sullivan later led the crowd in chants of “Sheep no more!”

The convention, organized by The Patriot Voice, faced an uncertain future when Caesars Entertainment dropped the event in August. The event drew media coverage for using QAnon imagery in its advertising materials. Last month, the convention found a new venue in the Ahern Hotel.

The QAnon conspiracy started in the fringes of the internet in 2017 but has crept into mainstream right-wing politics. Followers believe a secret group of Satan-worshipping, cannibalistic pedophiles control the “deep state” government.

Andre Popa, the event’s emcee on Saturday, told the crowd that government leaders are paid off to work against the public.

One attendee said during the event that they planned to put up signs asking what really happened during 9/11, a question Popa called “beautiful.”

Popa also raised questions about the COVID-19 vaccines, which health officials say are safe and effective.

“When they’re talking about the vax, this ain’t no vax,” Popa said. “Because typically when you’re getting the flu jab thing, it’s supposed to have the flu in it so the body builds its stuff. So is the thing today in this juice? So then how can it be? Therefore it’s not. So then the question is, what is it?”

On the second floor of the event area, Trump hats and shirts were for sale at a merchandise stand with a “Trump won” flag draped over the front. Flags hanging over a railing that were visible from the ground floor said “Trump is still my president” and “Stop the steal.”

Despite numerous legal challenges, no evidence has emerged to suggest there was widespread voter fraud in the 2020 election.

Media access to the event was highly restricted. A Las Vegas Review-Journal reporter was escorted by event staff, confined to one area and told to leave shortly before noon.

Shawn Sudduth, an executive assistant for one of the event’s organizers, said he doesn’t think there is widespread belief in the secret cabal of cannibals conspiracy, and that the people behind the event on Saturday are not “those people.”

He said the media has misrepresented QAnon as an organization, and that the movement is about a search for truth. This weekend’s convention is not a QAnon event, but just an opportunity to bring God-loving American patriots together, he said.

He did say it’s possible the cannibalistic pedophile group does exist because “people are capable of all sorts of things.”

The FBI has recognized QAnon as a potential domestic terror threat, but Sudduth said the people in attendance want peace.