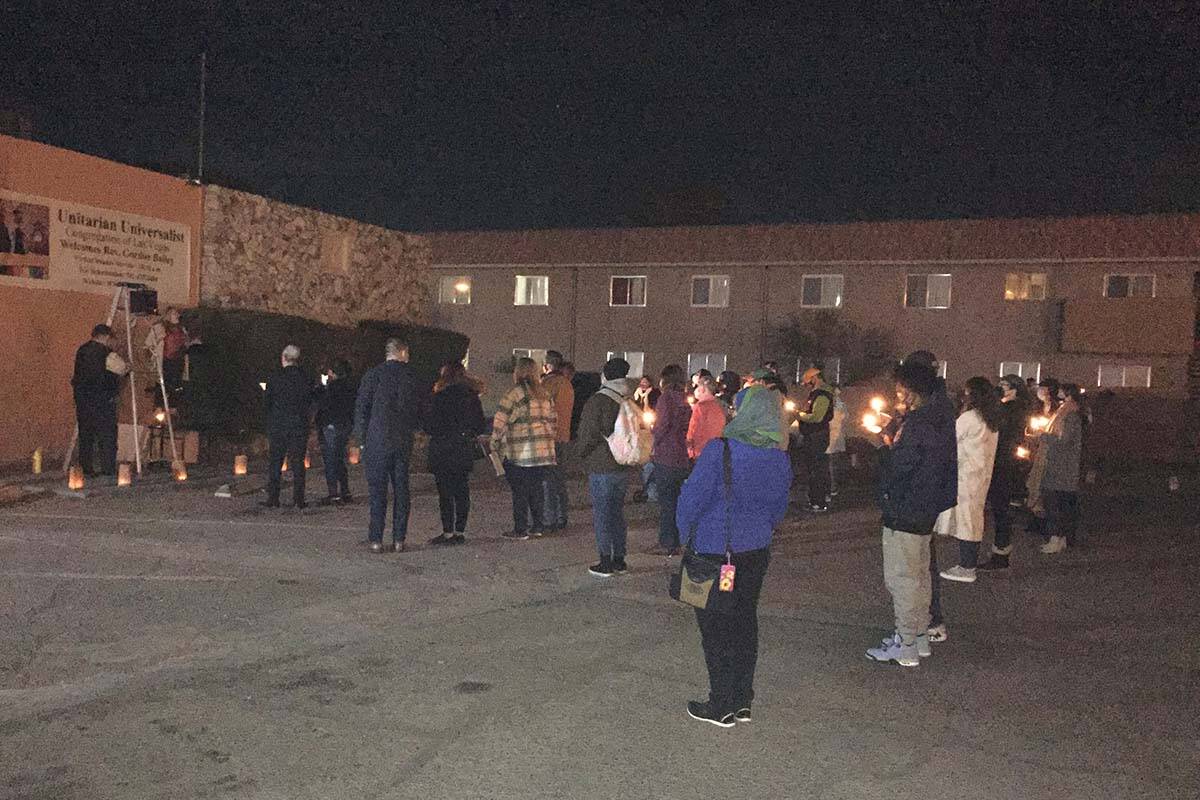 People take part in a vigil on Thursday, Jan. 6, 2022, outside the Unitarian Universalist Congregation of Las Vegas to mark the one-year anniversary of the attack on the U.S. Capitol. (Jonah Dylan/Las Vegas Review-Journal)

A year after a violent mob stormed the U.S. Capitol, Nevadans gathered in a church parking lot for a candlelight vigil and to remember the attack on democracy.

“The single most important thing that I know that emanates from my heart and mind is that we’re a human family in a struggle together,” said the Rev. Gordon Bailey, who spoke at the event. “And we’ve got to find a way to sit or stand at a table together, to gather in a community and to work our differences out.”

About 35 people showed up at the event on Thursday evening, which included a variety of speakers and was organized by the Unitarian Universalist Congregation of Las Vegas, 3616 E. Lake Mead Blvd. People sang songs, read poetry and held candles throughout the parking lot, marking the anniversary of the attack.

The Capitol was ransacked by a mob trying to stop congressional certification of the 2020 presidential election.

FBI agents and law enforcement officers in nearly every state arrested a total of 725 people on a range of charges in the months after the attack.

Three men from Nevada are currently in jail awaiting trial on felony charges that include assault.

Organizers had hoped for higher attendance, they said, but were still happy with the event. The church’s social justice committee organized the event, Bailey said, on a night that a slew of other churches had held similar events across the country, trying to bring a sense of unity.

Larry McAllister, a church member who helped organize the event, said he wanted to send the message that people are still willing to fight for democracy, whether at the local, state or federal level.

“We’re not done with democracy yet,” he said. “We’re not done. We have to fight for our individual rights and our voice in the political system. If there’s a message out there, it’s that we’re not laying down and letting a bulldozer roll over us. We’re out here.”