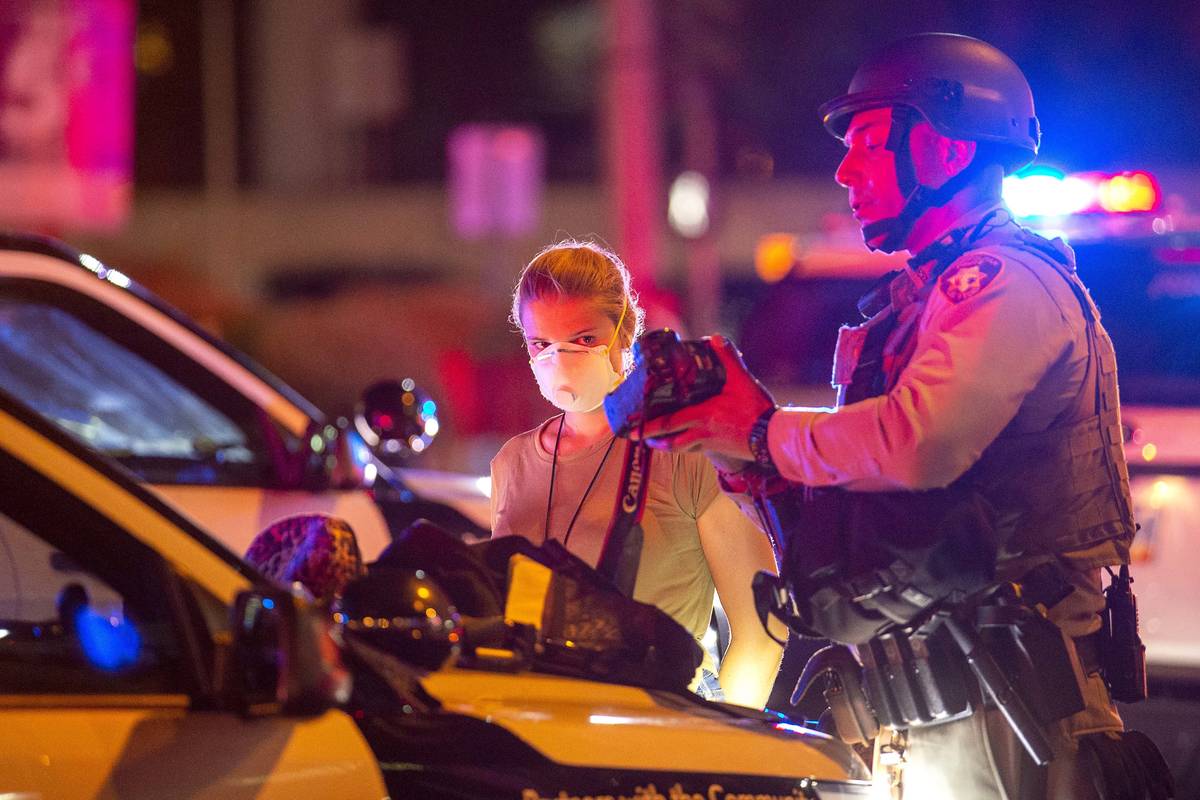 Las Vegas Review-Journal staff photographer Ellen Schmidt is arrested by Metropolitan Police officers while covering a protest near the Strip on Friday, May 29, 2020, in Las Vegas. The Black Lives Matter protest was in support of George Floyd, a black man killed by Minneapolis police earlier in the week. (Photo by Steve Marcus courtesy of Las Vegas Sun, © 2020 Las Vegas Sun) 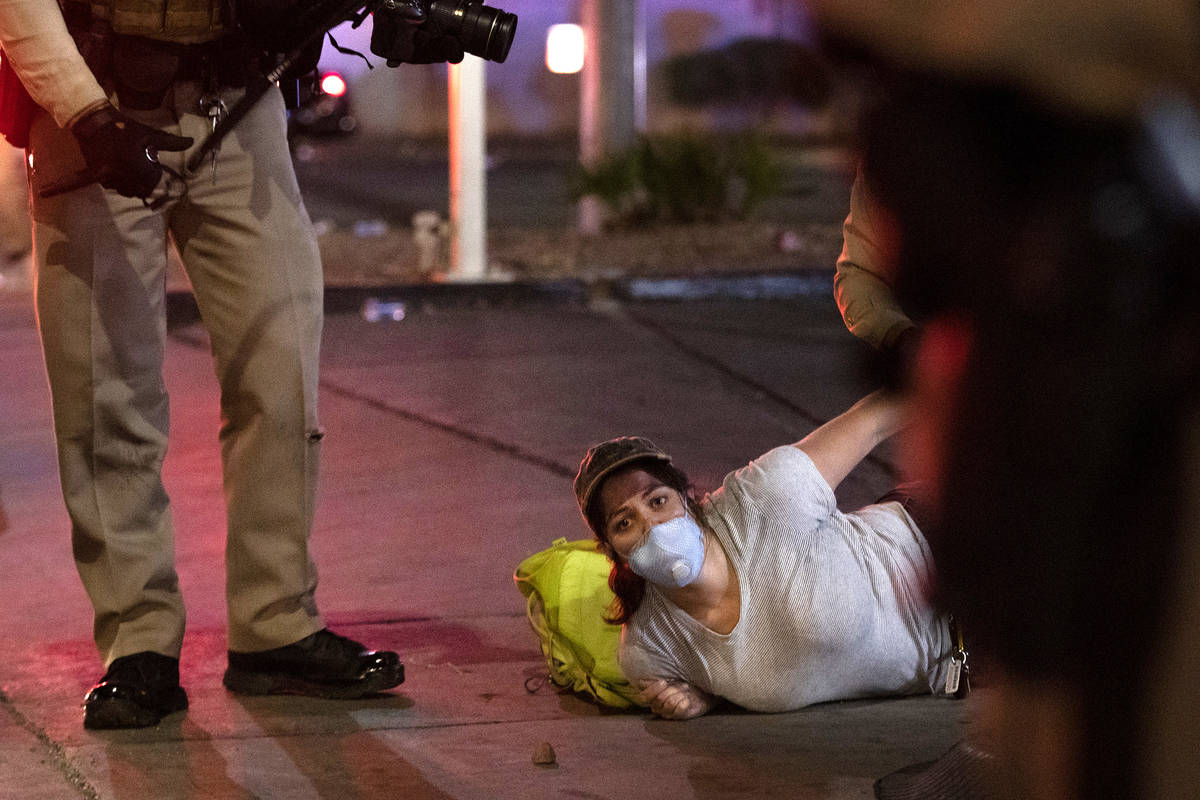 Photojournalist Bridget Bennett is arrested by Metropolitan Police officers while covering a protest near the Strip on Friday, May 29, 2020, in Las Vegas. The Black Lives Matter protest was in support of George Floyd, a black man killed by Minneapolis police earlier in the week. (Ellen Schmidt/Las Vegas Review-Journal)

Las Vegas police wrongly jailed dozens of protesters and two photojournalists during a tense Friday protest on the Strip, violating a court order that prohibits most misdemeanor bookings during the coronavirus pandemic.

Most people arrested appear to face misdemeanor charges of failure to disperse.

“These people should have never been held on these misdemeanors,” said Las Vegas Chief Justice of the Peace Suzan Baucum. “It’s a travesty.”

Both Schmidt and Bennett face the failure to disperse charge, and were released from the Clark County Detention Center early Saturday after posting a $1,000 cash bond.

Baucum said Saturday that none of the people arrested on that charge should have had to post bail. Due to the coronavirus and earlier bail reform efforts, those arrested on misdemeanors should be released on their own recognizance, with few exceptions, she said.

A related order, aimed at protecting the community from the spread of COVID-19, was issued on March 17 by Baucum and Nevada Supreme Court Chief Justice Kristina Pickering.

Anyone who remained jailed on the failure-to-disperse charge as of Saturday afternoon was being processed and would not need to post bail to be released, Baucum said. Those who posted bail will get refunds, she said.

“That should never have happened,” Baucum said. “But there was a miscommunication from one of the chiefs at the jail — I don’t know who that was — to a supervisor at the jail via a telephone call to Las Vegas Justice Court pretrial services. I’m still working through that.”

“I was shouting that I’m a journalist”

Clark County Sheriff Joe Lombardo told the Nevada Independent on Saturday that the journalists were arrested after refusing to obey two orders to disperse and that they did not identify themselves as members of the media.

In the news release Saturday, Metro did not acknowledge the journalists’ arrests. Lombardo did not respond to requests for comment from the Review-Journal.

Police spokesman Larry Hadfield said in an email Saturday evening that those arrested “were given many opportunities to disperse and act lawfully.” He did not answer questions from the Review-Journal regarding why the journalists were arrested.

“The decision was made that those persons who continued to disregard lawful orders to disperse were booked into (the jail),” he said.

Review-Journal Executive Editor Glenn Cook said Saturday that Schmidt and Bennett “never should have been touched, let alone arrested and then booked into jail.”

“It is appalling that Las Vegas police officers, who have nothing to do with what happened in Minnesota, would so forcefully take into custody two people who were obviously working photojournalists and posed no threat to law enforcement or public safety,” he said.

“Journalists put themselves at risk to inform citizens about protesters’ grievances and their actions, and to observe whether law enforcement personnel are operating within the bounds of the law,” he said. “The arrest of journalists working in a public forum at a highly newsworthy event is absolutely unacceptable.”

The protest reached 400 at its peak, with multiple groups on the Strip from the Bellagio to Circus Circus. Metro on Saturday said the protest later turned violent and that 12 officers were injured, some after a small group of protesters threw rocks at police.

The police were warning people to move out of the road or face arrest. At other points, they shouted at the crowd that protesters on the sidewalk also would be arrested. Police were seen arresting people who did not follow orders, and also were seen tackling multiple protesters.

In response to a question during the briefing Friday night about whether a newspaper photographer had been arrested, Lt. Dori Koren said he didn’t have that information. He said he could say with confidence that those arrested were violating the law where there was a safety issue.

A video sent to the Review-Journal showed Schmidt and Bennett’s arrest. Both women are seen walking away from officers ordering to people to back up before officers grabbed them. Moments before their arrest, the women were photographing officers rushing protesters, which happened frequently as what was left of the demonstration was pushed onto Flamingo Road.

Schmidt was arrested while officers in riot gear attempted to disperse a crowd of about 100 they had pushed east of Las Vegas Boulevard and onto Flamingo Road.

A photo taken by Las Vegas Sun photographer Steven Marcus showed Schmidt with her hands behind her back, standing next to a police officer who was holding her camera. Schmidt said the officer was turning her camera off.

“In an already tumultuous time for our city and country, it’s upsetting to have the right to document public events threatened by police,” Schmidt said. “I hope this brings light to the importance of press freedom and then returns to the story I was reporting on.”