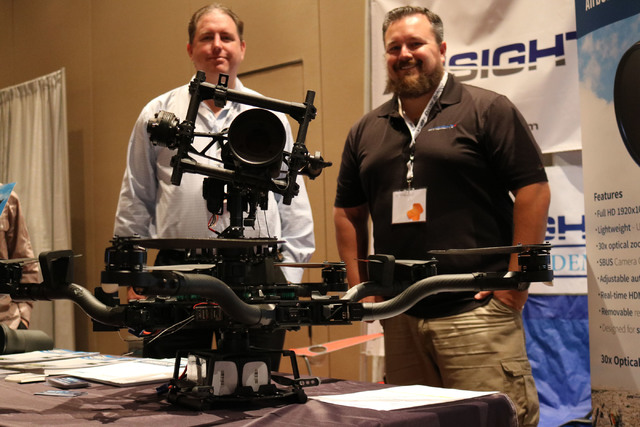 The Strip has a new business amenity: drones.

Las Vegas-based AviSight, an aerospace and remote sensing services company, is the first company in the U.S. to be able to fly down the resort corridor including the Strip, albeit in small and controlled doses.

William O’Donnell, AviSight’s vice president of technology, said the Federal Aviation Administration gave them the go-ahead early this week after months of “waiting and hoping.”

“We wanted to go out there and fly, but we’ve been swamped with so much other stuff going on we haven’t had the time to go out there and do our maiden voyage,” O’Donnell said with a chuckle. He said he anticipates “finally” getting out there later this week or early next week.

The approval opens many new business opportunities for AviSight to contract its services.

“Here in Las Vegas, 90 percent of the major business is done down in the Strip area,” O’Donnell said. “You have the movie stuff, that’s going to be huge. Each individual casino that wants marketing pieces to be able to showcase their casinos like never before, now they’re able to with beautiful drone footage.”

“It’s not only going to save money for the actual construction work, but it’s going to save a tremendous amount of time,” O’Donnell.

Ian Gregor, an FAA spokesman, said the administration has issued authorizations to “several entities” to fly in that same class of airspace, but AviSight can now “potentially fly in several locations adjacent to the Strip, while the other companies are generally limited to one location.”

The AviSight team will still have to get FAA approval for every flight operation they intend to do in that airspace.

“We have to give at least 24 hours notice prior to flying and then immediately call them (the FAA) before flying,” O’Donnell said.

Each operation will also be limited to flying within a quarter mile radius of their approved location and below 200 feet altitude, Gregor said.

“We can cancel the authorization at any time when we deem it necessary,” Gregor said. “AviSight’s authorization is valid from May 1, 2017 to Nov. 30, 2017. It is quite restrictive to ensure the company’s drones don’t pose hazards to any airplanes or air tour helicopters.”

O’Donnell said he intends to keep renewing the authorization.

AviSight is currently not authorized to fly directly over people.