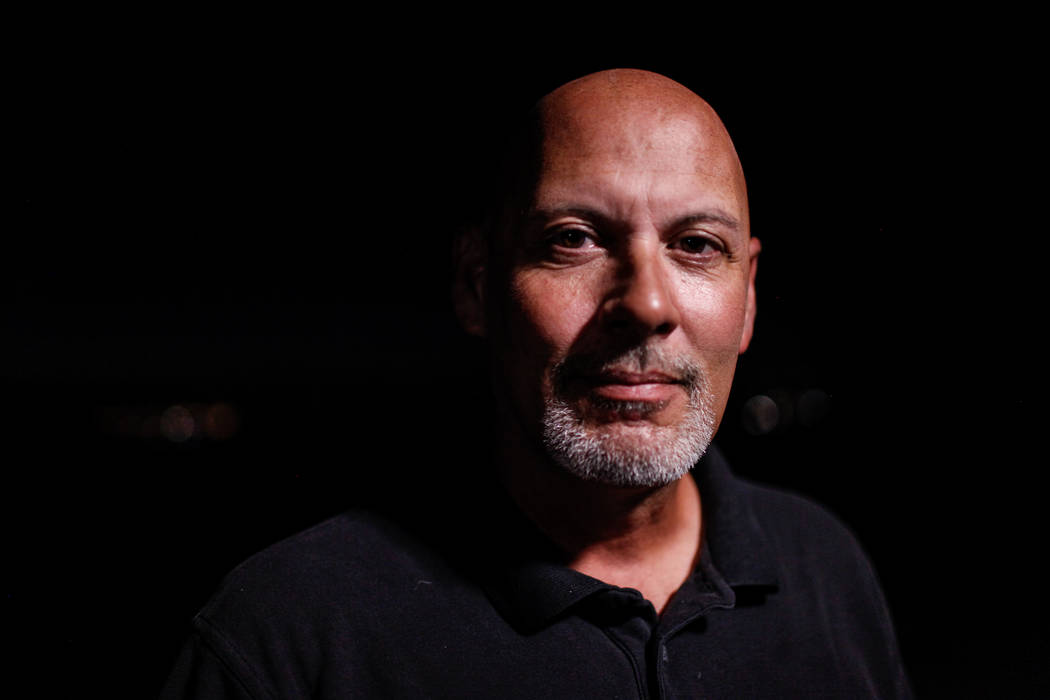 Raymond Page, 52, a Clark County traffic systems technician who lives in Henderson, loaded up his truck with at least eight people who were wounded and took them to nearby medics during the mass shooting on Las Vegas Sunday night. (Joel Angel Juarez/Las Vegas Review-Journal) @jajuarezphoto

He captured the second shots of the harrowing night on film: 10 long seconds of rapid gunfire.

Raymond Page wore his neon vest Sunday night, adjusting traffic signals on Las Vegas Boulevard when he heard the first shots. He pulled out his phone and captured the second shots. In 10 minutes and 22 seconds, he caught 10 bursts of gunshots on camera.

Concertgoers scattered from the side entrance of Route 91 Harvest festival, outside Gate 2B. They were across from Mandalay Bay, where 64-year-old Stephen Paddock sprayed the sky with bullets.

There were so many. Ping, ping, ping.

Maybe his phone would catch one, he thought. It would be evidence. He filmed and walked toward the mayhem.

A man in a black shirt jumped a fence. Attendees filed out the exit in red, white and blue cowboy hats, tie-dye shirts and bandanas.

“Guys, keep going, please, please,” a Metropolitan Police Department officer pleaded as he tended to a man with a bullet wound in his foot.

“Run! Get down!” Page shouted at the people passing by. A man threw his beer in a nearby garbage can and bolted.

“Those are shots! Run, don’t walk!” An officer shouted.

Then, 21 seconds of silence.

“Go, go, everybody go!” Page shouted. “Keep your head down.”

Ten seconds of gunfire. The gunman took 25 seconds to reload.

“It was almost like it was a movie, as it was happening,” Page, 52, said. In the 12 seconds of the seventh volley, many crouched against a wall to shield themselves.

After a 15-second break, at time mark 4:55, the blasts lasted 13 seconds. During the 44 seconds in between the next round, Page directed people running for their lives.

Eleven seconds of firing. A man pushed a woman out in a wheelchair with flashing green lights. A chain of people dashed out of the exit, holding hands.

For 80 seconds, they were safe. Then, eight seconds of unrelenting discharge. Nineteen quiet seconds. And the last blast came. Six seconds.

A man walked slowly on the street and leaned against a concrete wall. He asked for help.

“I’ve been shot in the arm,” he said. “I need an ambulance. There ain’t nobody here to help us.”

As the two walked, a nearby Metro officer shouted, “There’s somebody shooting in the Mandalay Bay.”

“He’s been shot,” Page said. “Do we have medical set up somewhere yet?”

The officer gestured with his arm. “Take him east,” he said. “They’re not going to come this way.”

As Page escorted the man to the other side of a wall, a helpless voice caught on video can be heard breathing the word “babe.”

The man sat down and stretched his arm over his head. It dripped with blood. A man who identified himself as an off-duty Metro officer added a second tourniquet.

“Put some pressure on it,” Page said.

The man responded, “My gut hurts.”

He lifted his shirt, exposing his rib cage. He’d been hit in the chest.

“I do got one?” He asked about the bullet, surprise in his voice. “I want help, I want ambulance.”

Page ran back to his white Clark County pickup and helped pile the man and six or seven other injured people aboard. Many were hauled over the back of the truck’s rear. A man in his backseat had horizontal lines across his forehead where bullets had ricocheted.

“I was kind of reacting to everything that was happening as it was happening,” Page said.“My biggest thing about what happened is that there’s not a plan for getting injured people out if there’s an active shooter.”

He wondered what would have happened if Paddock had barricaded himself in.

“Would all of those people just been laying there that whole time?” Page asked. “They have to take a chance and go in and get the injured people.”

Since Sunday night, the scenes of the shooting, up until he dropped off victims, replayed in Page’s mind.

“That’s the one thing,” he said. “Everyone was just helpless and vulnerable.”