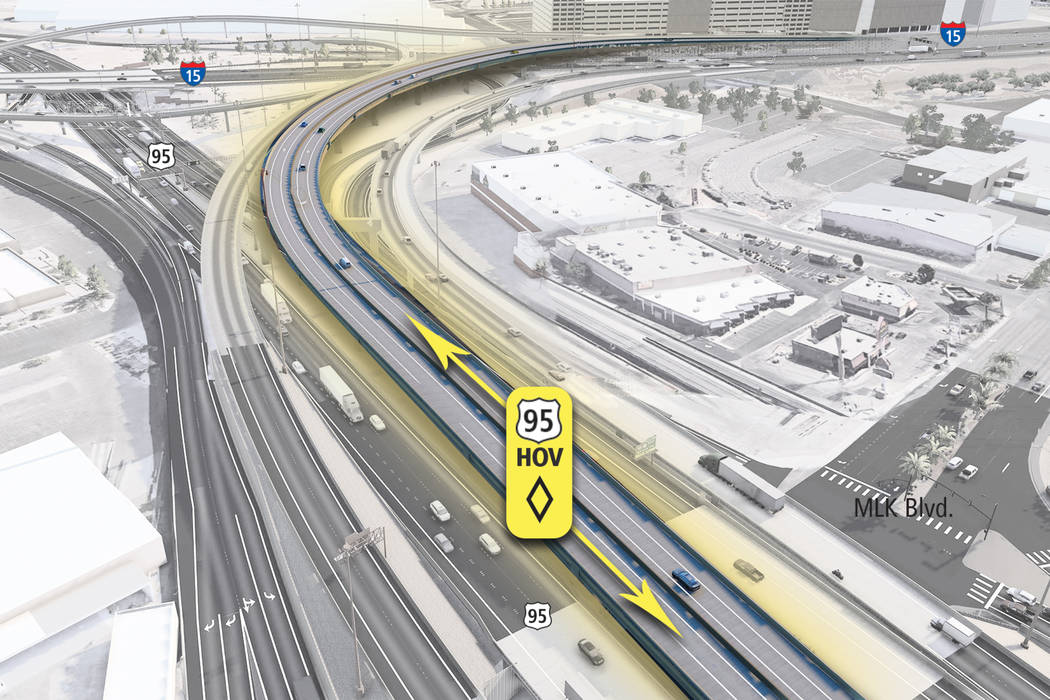 U.S. 95 will be narrowed to two lanes so that crews can split the northbound and southbound lanes by 70 feet, creating enough room to build an 81-foot-tall flyover ramp for high-occupancy vehicles. Source: Nevada Transportation Department (Gabriel Utasi/Las Vegas Review-Journal)

When Project Neon wraps up next month there will be 22 miles of continuous High Occupancy Vehicle lanes in the valley and motorists will see changes in how those lanes are regulated.

The HOV lanes will stretch from Silverado Ranch Boulevard in Interstate 15 to Elkhorn Road on U.S. Highway 95. The current two lane expressway lanes will be restriped to one HOV lane and one all-purpose lane, according to the Nevada Department of Transportation.

With over 2.2 million residents and 43 million visitors, of which at least 60 percent drove, bottlenecks are becoming increasingly regular on valley highways.

“Southern Nevada currently lacks a complete carpool lane network, resulting in merge-and-weave movements for freeway-to-freeway connections,” said Tony Illia, NDOT spokesman. “However, Project Neon fixes that with 22 consecutive miles of HOV lanes between I-15 and U.S 95, with a Spaghetti Bowl flyover connector and interchange between Oakey Avenue and Charleston Boulevard.”

Regulating HOV lanes will also change. Currently the HOV lanes are utilized as such only during high traffic times, from 6 a.m. until 10 a.m. and 2 p.m. until 7 p.m. Monday through Friday.

Once the new lanes go live in mid-May the HOV lanes will be enforced 24 hours a day, seven days per week, according to Dale Keller, NDOT assistant chief of project management, who presented the HOV plan Thursday to the Regional Transportation Commission of Southern Nevada board of commissioners.

Additionally, crossing the solid double white line of an HOV lane is also illegal; motorists are allowed to enter and exit the lane only where dotted lines are present.

Aside from the new enforcement hours and lane restrictions, NDOT provided these dos and don’ts of HOV lane usage, once the new system is in place.

— Vehicles with two or more occupants. Babies count as passengers, but pets don’t.

— Motorcycles, even with one rider.

— RTC Buses. With or without passengers.

— Emergency vehicles. With lights on or off.

— Electric cars. Unless with two occupants, as per Nevada law.

— Trucks with two axles. Even with two occupants.

Motorists found to be in violation of any of the prohibited actions face fines of $250.

The 20-year-old HOV plan has been updated twice, once in 2015 and in 2018 utilizing input form the public, stakeholder and others in Clark County.

“We want to have a system for the community as a whole,” Keller said.

NDOT hopes the HOV lanes will encourage carpooling, which not only removes vehicles from the roads, but offers a positive environmental impact as well. 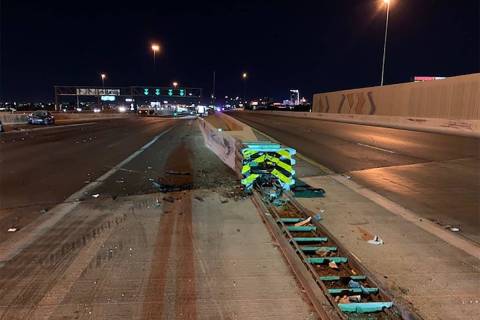