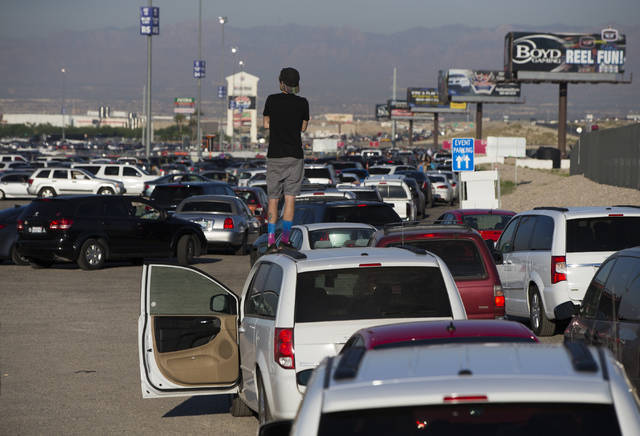 Traffic leading out onto Interstate 15 is backed up for miles at the end of the first day of Electric Daisy Carnival, Saturday, June 18, 2016 at Las Vegas Motor Speedway in Las Vegas. (Benjamin Hager/Las Vegas Review-Journal) 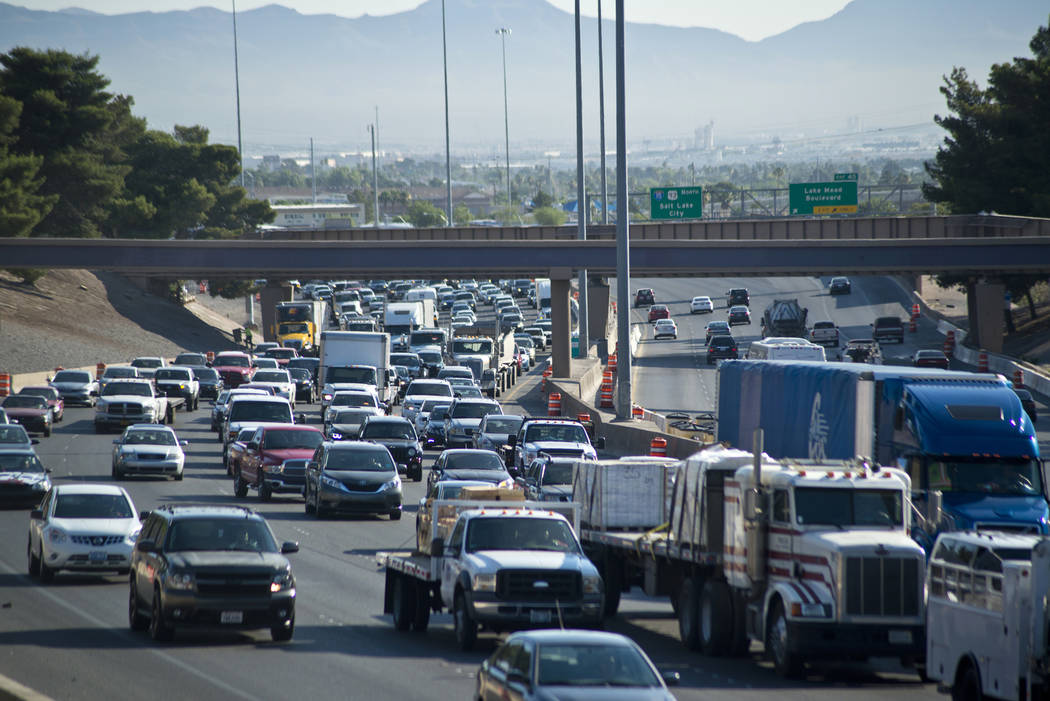 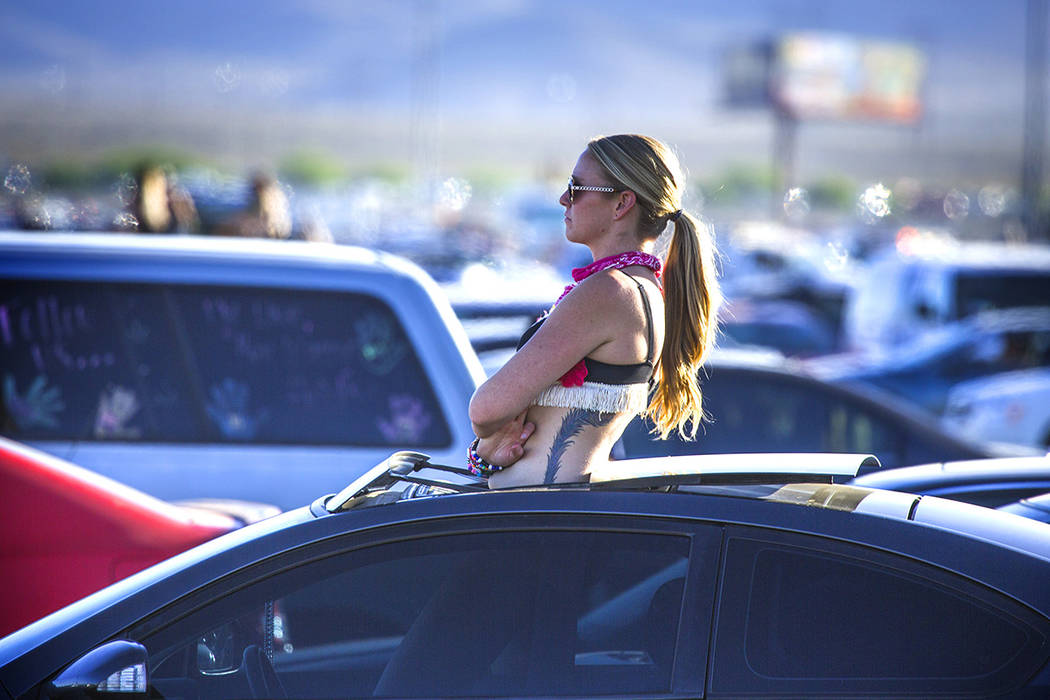 A fan waits for traffic to move in the Las Vegas Speedway parking lot after the Electric Daisy Carnival ended on Monday, June 22, 2015. An estimated crowd of 140,000 people attended the three-day EDC festival. (Las Vegas Review-Journal/File) 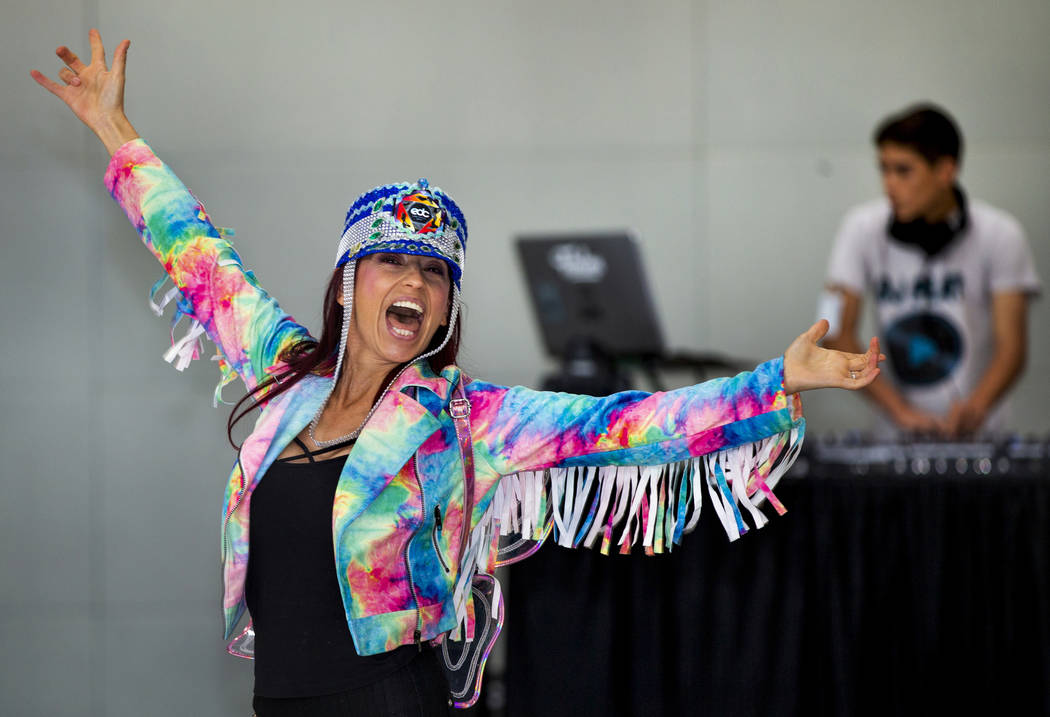 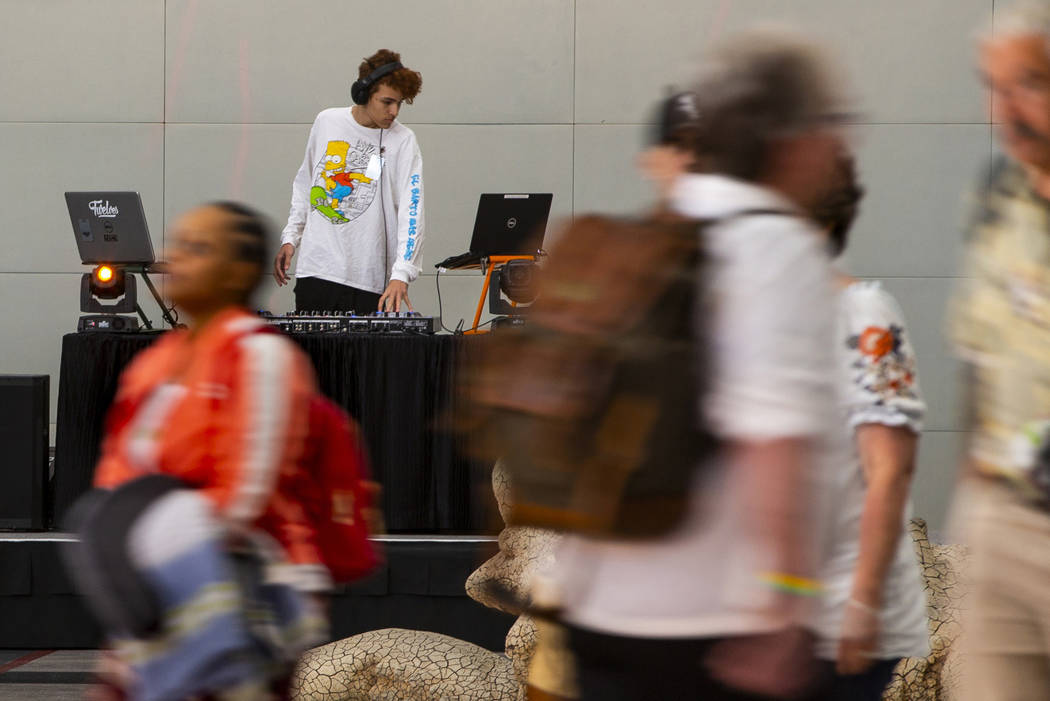 DJ SND BNDR plays for travelers including EDC visitors arriving through Terminal 3 at McCarran International Airport as part of Voices of Vegas on Thursday, May 16, 2019, in Las Vegas. (L.E. Baskow/Las Vegas Review-Journal) @Left_Eye_Images 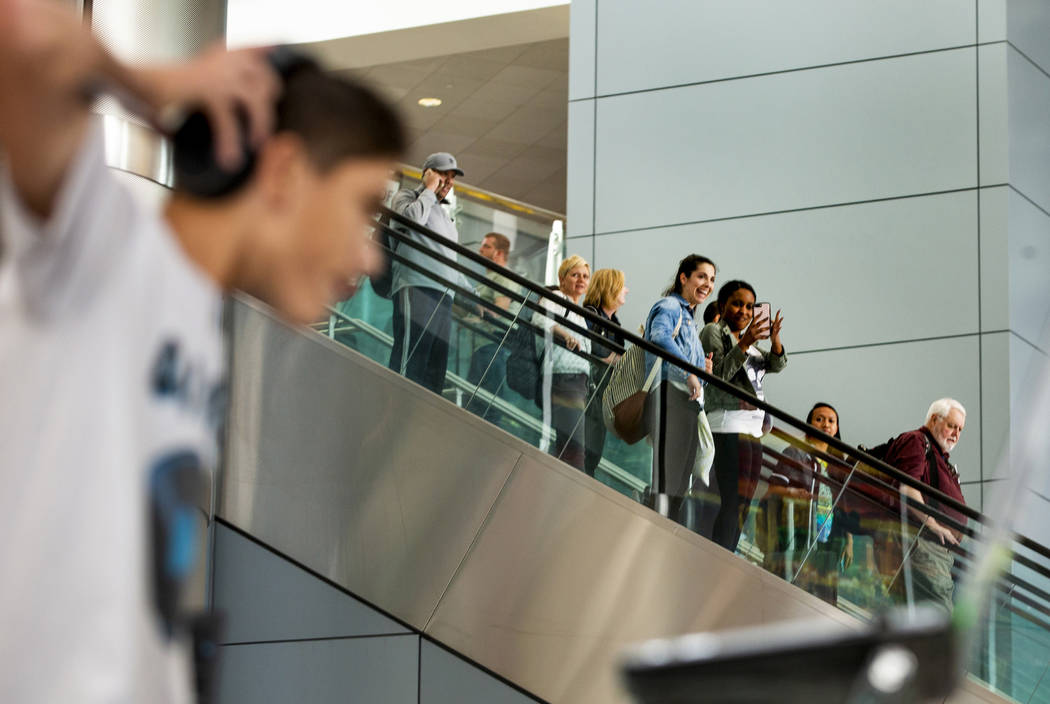 Travelers arrive as DJ Play performs for them including EDC visitors coming through Terminal 3 at McCarran International Airport as part of Voices of Vegas on Thursday, May 16, 2019, in Las Vegas. (L.E. Baskow/Las Vegas Review-Journal) @Left_Eye_Images

DJ Snake Fangs plays for travelers including EDC visitors arriving through Terminal 3 at McCarran International Airport as part of Voices of Vegas on Thursday, May 16, 2019, in Las Vegas. (L.E. Baskow/Las Vegas Review-Journal) @Left_Eye_Images 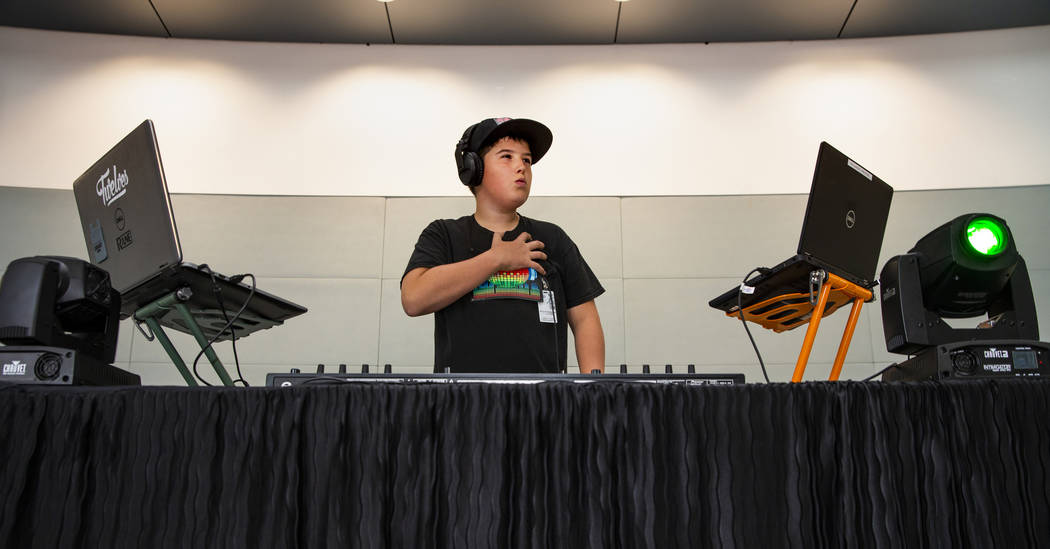 DJ Snake Fangs plays for travelers including EDC visitors arriving through Terminal 3 at McCarran International Airport as part of Voices of Vegas on Thursday, May 16, 2019, in Las Vegas. (L.E. Baskow/Las Vegas Review-Journal) @Left_Eye_Images 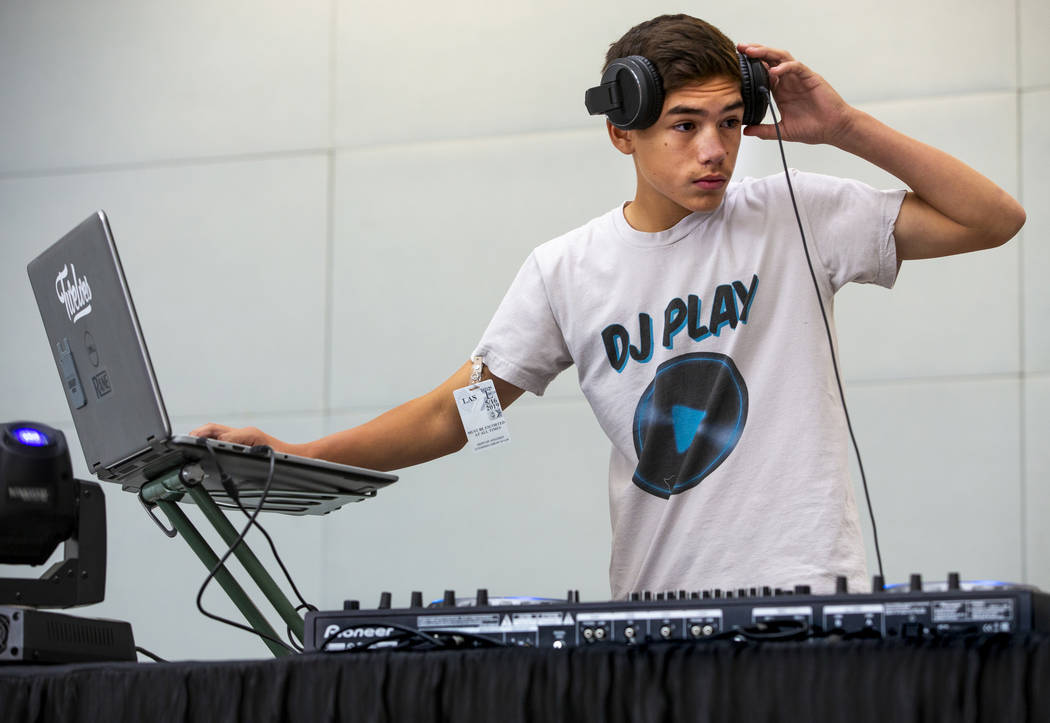 DJ Play performs for travelers including EDC visitors arriving through Terminal 3 at McCarran International Airport as part of Voices of Vegas on Thursday, May 16, 2019, in Las Vegas. (L.E. Baskow/Las Vegas Review-Journal) @Left_Eye_Images

It’s that time of year again.

Las Vegans can expect heavy traffic this weekend as travelers from around the world descend on the Electric Daisy Carnival, held each year since 2011 at the Las Vegas Motor Speedway.

Inside the festival grounds, attendees can escape for three nights to a psychedelic playground. But outside — well, it might be a better idea to stay home this weekend.

With more than 155,000 ticket holders expected each day, along with more than 15,000 workers and performers, any route between the Strip and the speedway likely will be choked with traffic. That includes Interstate 15 but also Las Vegas, Lamb and Nellis boulevards.

As the Nevada Highway Patrol warned, “Travelers are advised to have plenty of water and snacks in their vehicle should they be stuck in traffic.”

There is hope yet: I-15 is wider this year, thanks to the Nevada Department of Transportation’s ongoing Project Neon expansion. The interstate’s high-occupancy vehicle lane also will open Monday, when commuters mix with weary concertgoers and traffic is typically the worst.

Camping also is being offered at the festival grounds again this year. But with 4,000 camping sites and 1,300 RV sites compared with the hundreds of thousands of attendees, travelers this weekend still should expect substantial traffic delays.

“Las Vegas locals are urged to allow for more travel time,” the Highway Patrol advised, adding that commuters should avoid the Spaghetti Bowl at all costs early Monday.

Traffic officers will be out in force near the festival this weekend, tasked with spotting impaired drivers, Highway Patrol spokesman Jason Buratczuk said. He noted that “every trooper is working.”

For festival attendees looking to avoid the wheel, ride-hailing companies, including Lyft and Uber, also will be working the event. Designated pickup and drop-off spots are located just outside the speedway.

For $99, festival attendees also can purchase a three-day, round-trip shuttle ticket from Insomniac, the company that founded the festival.

The shuttles carry passengers to and from the festival grounds starting at the Rio, Tropicana, Bally’s or Circus Circus or at the intersection of Fremont and Ninth streets in downtown Las Vegas.

If that doesn’t cut it, there are at least two options for attendees to travel quite literally above the crowds. Both Maverick Helicopters and Papillon Grand Canyon Helicopters are offering EDC flights. Just be ready to pay a pretty penny.

Papillon has one-way flights to the EDC site running at $499 a person. The trip lasts about 12 minutes, and the package includes limousine pickup and a shuttle ride from the landing area less than a mile from the speedway.

Maverick is offering one-way flights for $550 a person that land directly across from the EDC entry gates. The company also is offering round-trip flights for $850 a person. All packages include Maverick lounge access before the flight.

The Las Vegas festival used to be held in June, when even at night the weather was toasty. Last year the dates were moved to slightly cooler May, and the new time frame was adopted again this year.

But according to the National Weather Service, it may be a little chillier than usual this weekend. High temperatures likely will be in the 70s with a peak of 81 degrees Saturday. Lows through the weekend likely will dip into the low 50s.

The weather service also noted that both Friday and Saturday likely will be dry, but Sunday has a slight chance of showers. It also will be fairly windy Sunday afternoon, with 30 mph gusts that may not subside until late evening.

A break in the heat is likely good news for locals. But festival attendees may want to pack a jacket — just in case.