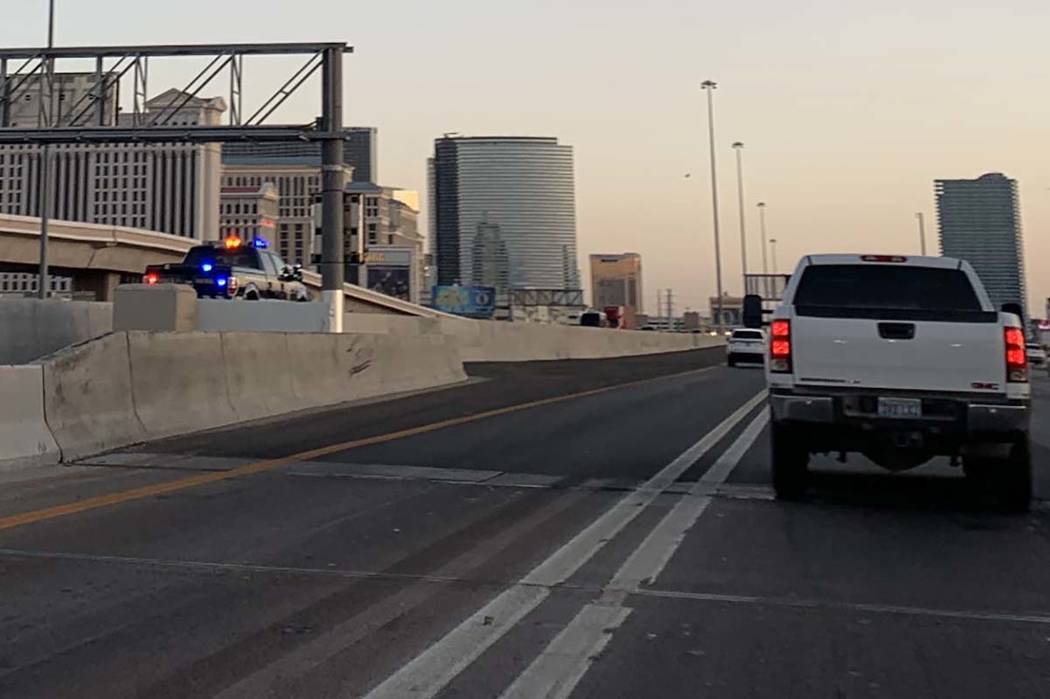 State highway officials are taking the high road to get the upper hand on speeders on Las Vegas Valley freeways.

The new sites could help law enforcement minimize speeding and crashes in high-risk areas by being stationed on the elevated, protected platforms in visible locations, thus encouraging drivers to slow down.

A mile ahead of hot spots

The platforms are placed a mile ahead of identified trouble spots with a high incidence of crashes, with four along I-15 and two located on U.S. 95.

The pair on U.S. 95 are located on the southbound lanes, one near Cheyenne Avenue and one near Jones Boulevard.

Most of the sites will feature a single patrol vehicle but some are equipped to allow for two troopers to be stationed at one time.

During a 2018 pilot program on I-15 south of the Russell Road overpass, NHP saw 91 percent of speeding drivers slow down below 65 mph while the pilot sites were active. Also, the pilot program resulted in a 17 percent reduction in crashes during the test period, according to NHP.

The elevated sites are used at all times of day, including morning and evening rush hours. The most dangerous periods for significant crashes occur when traffic congestion causes a sudden change in speeds such as during rush hour when motorists traveling at highway speeds encounter vehicles traveling 25 mph or slower, according to Highway Patrol Lt. John Arias.

“These congestion backups occur during the start of heavy commuting periods such as in the morning, evening commutes, and or as a result of a significant crash that closes multiple lanes on the highway,” Arias said.

“Once traffic reaches congestion where normal traffic is traveling below the posted speed due to highway congestion and not due to the STMS sites, the preventative measure is no longer effective. What we are doing now (is) testing various strategies and utilizing messaging to maximize the efficient flow of traffic but still provide early warning to drivers that they are approaching high crash areas.

“Our goal is to figure out how we can better help everyone get to where they need to be faster and safer.”

The initiative is a partnership between NHP, the Nevada Department of Transportation and the Regional Transportation Commission of Southern Nevada. The two transportation agencies used Waycare’s artificial intelligence software to identify the hot spots.

Funding for the project came through Road to Zero federal grant. The grant is managed by the National Safety Council, which began the initiative with the goal of eliminating roadway deaths within 30 years by accelerating advanced technology, prioritizing safety and emphasizing past accomplishments.

“We are proud to have been awarded the Road to Zero grant that allowed NHP to continue to work in partnership with NDOT and RTC, and further the use of Waycare’s cutting-edge technology to make a significant difference in traffic congestion and crashes,” Arias said.