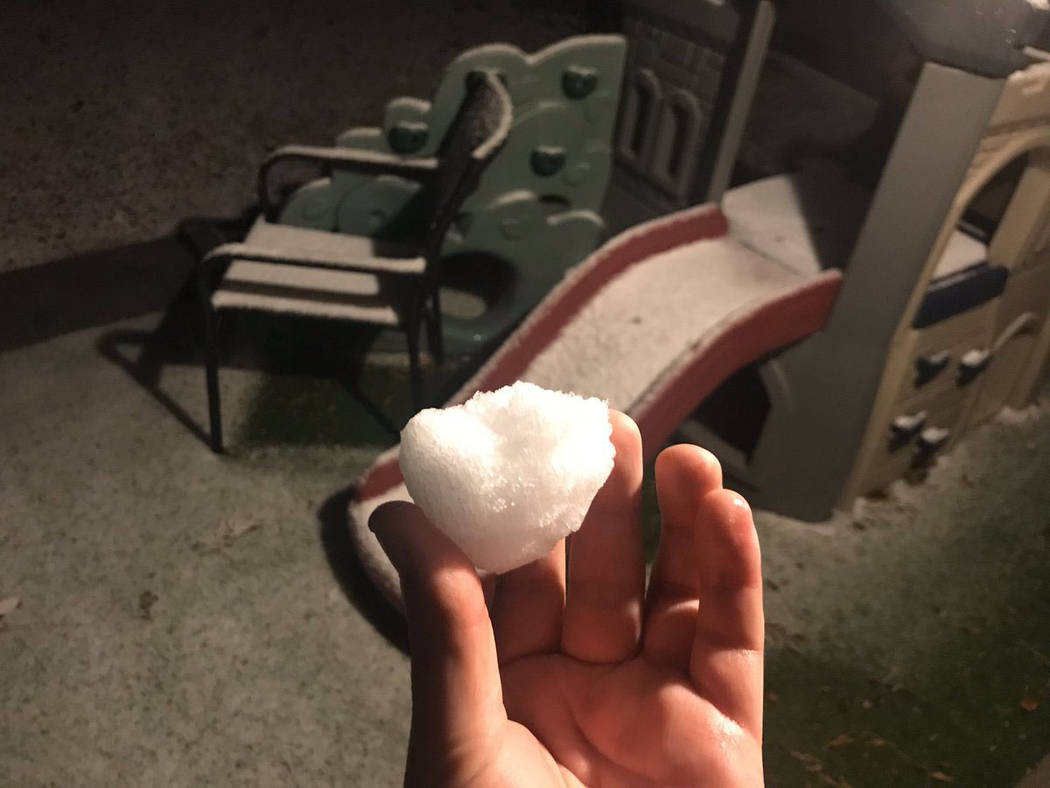 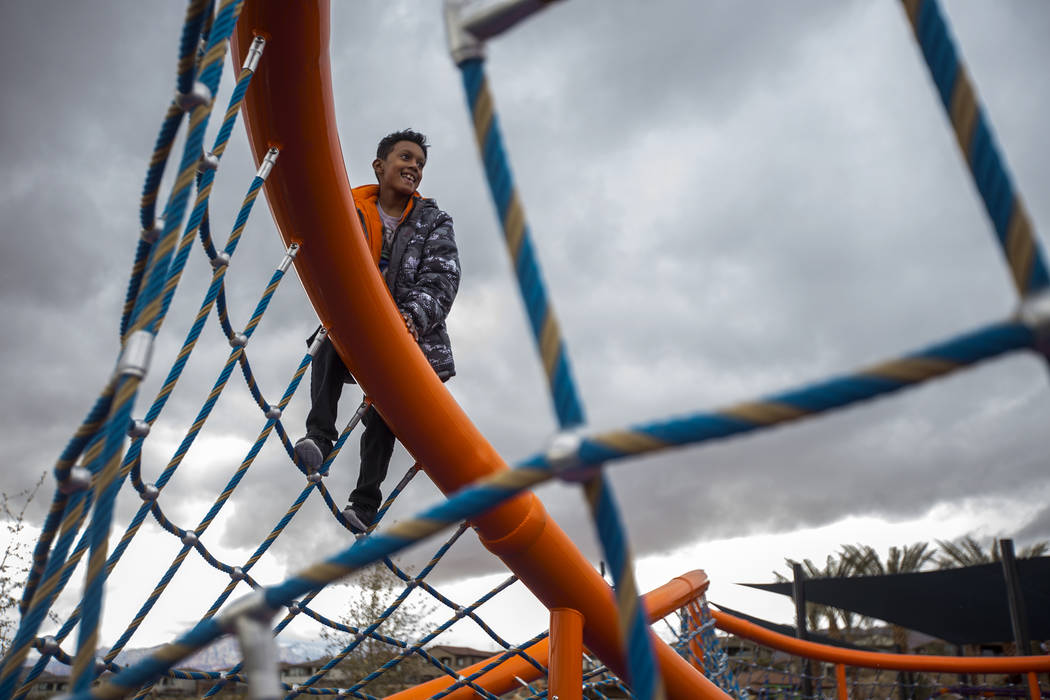 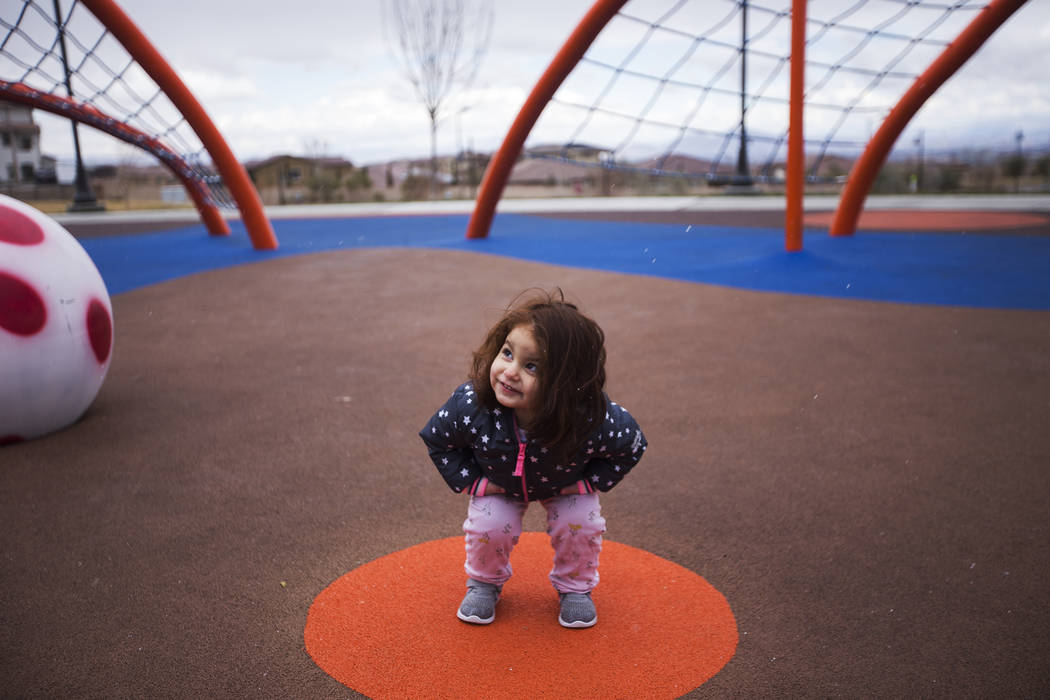 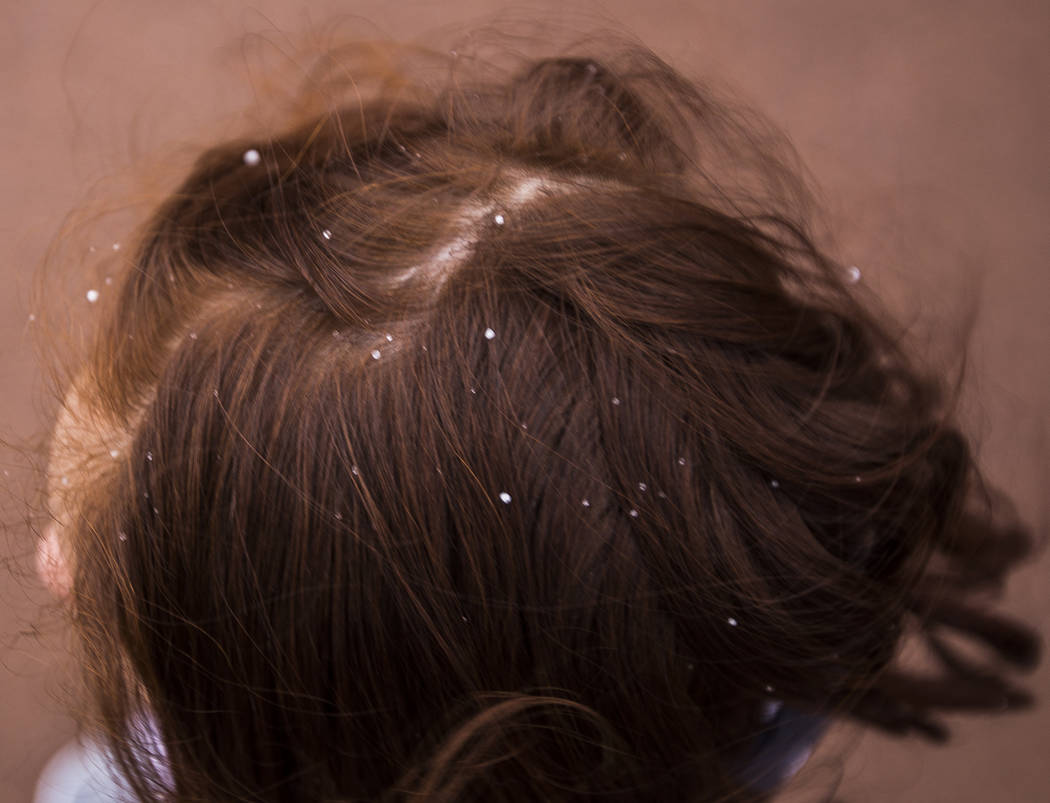 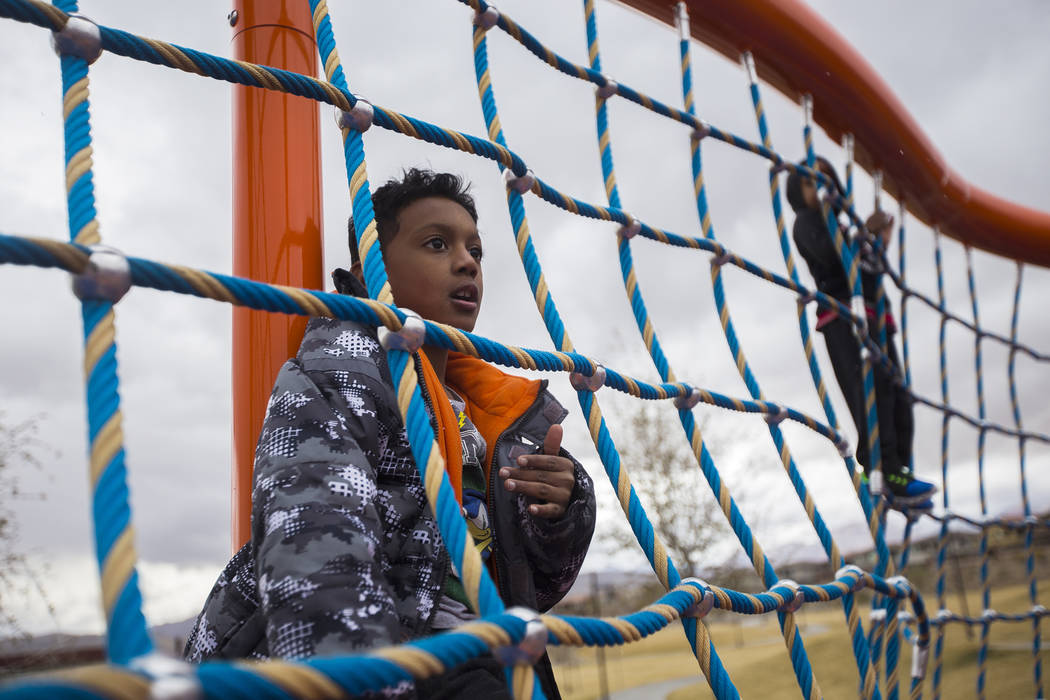 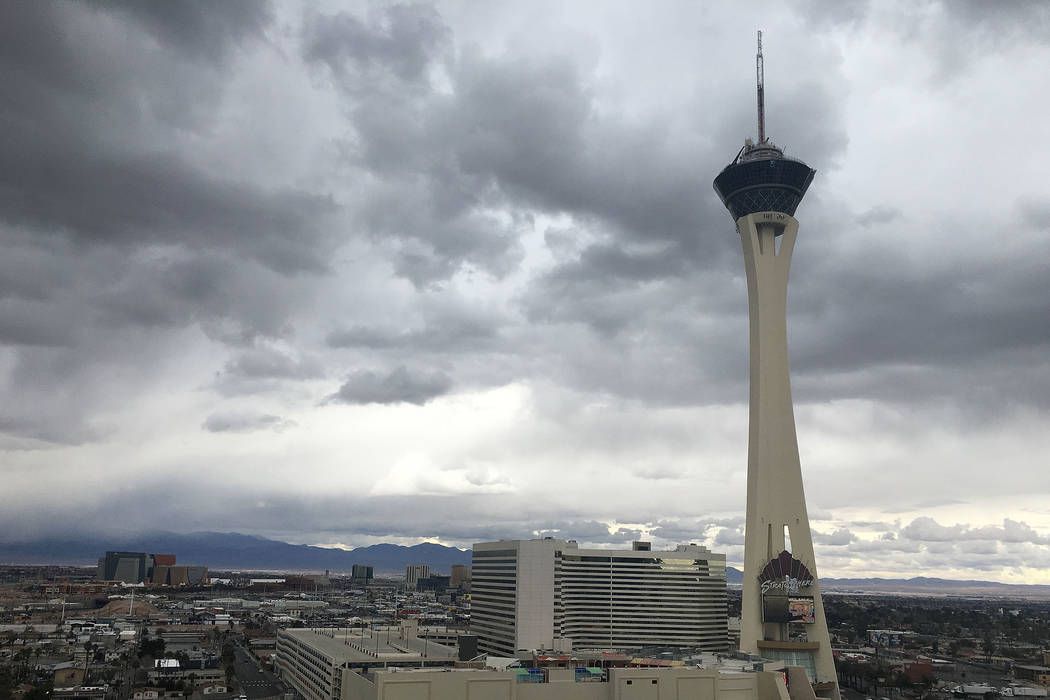 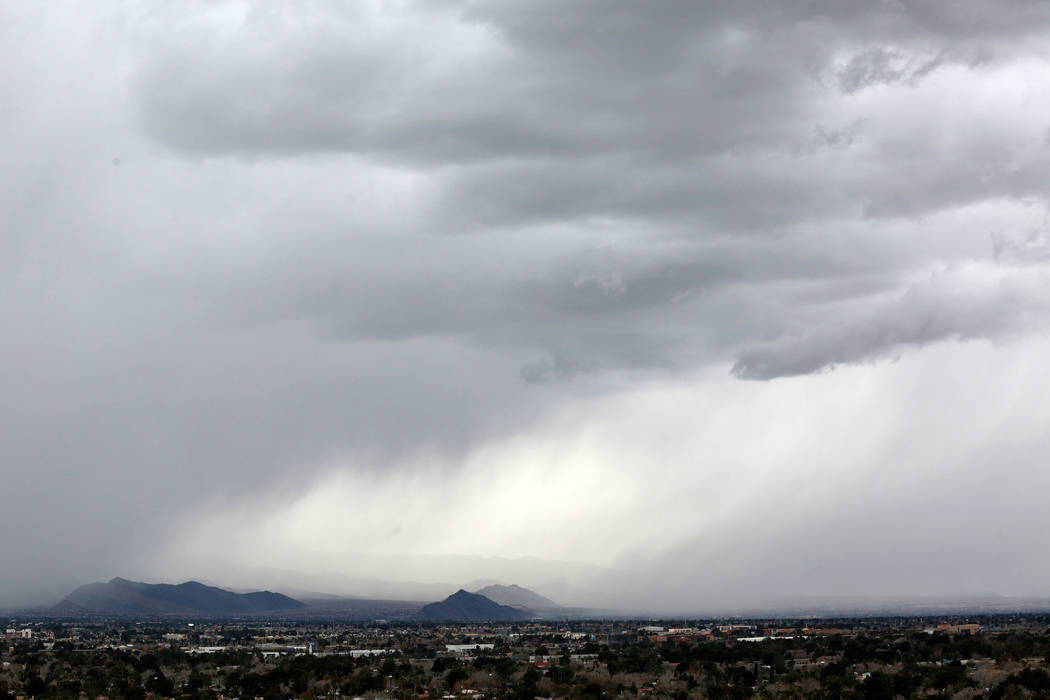 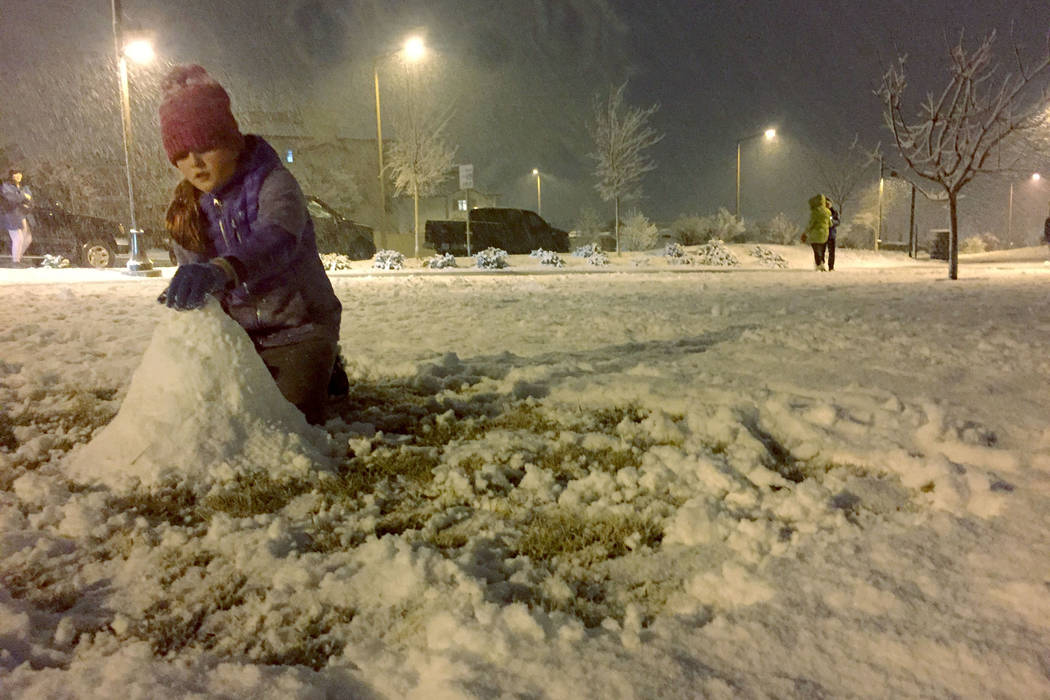 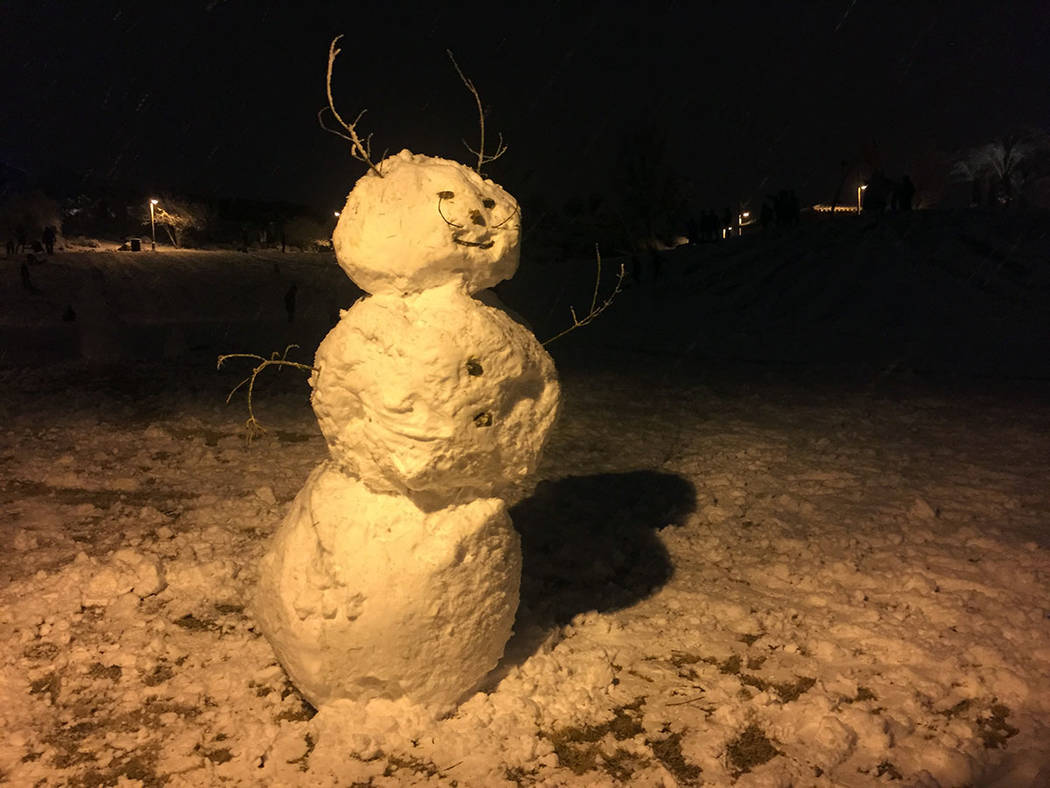 The last time enough snow stuck around in the Las Vegas Valley to be measured, you may have taken a grainy picture of it with a flip phone or Blackberry.

Snow accumulated in the valley for the first time in more than a decade during a winter weather advisory that lasted through 4 a.m. Monday, according to the National Weather Service.

Snow fell in parts of the valley Saturday night and Sunday, and the weather service forecasts snow to accumulate as much as 2 inches in parts of the valley as temperatures drop to near freezing overnight, meteorologist Chelsea Kryston said. Summerlin, Centennial Hills, Anthem and southern and northeastern Clark County are expected to see about an inch or two, while Spring Valley and the central valley could see half an inch to an inch of snow, the weather service said.

Ellie Pringle, 10, a fifth-grader at Givens Elementary School, made a snowman Sunday night at Fox Hill Park in Summerlin. Her mom, Katie Prindle, drove her daughter to the park after the snow started falling, noting when that happens, “We come out to play.”

Ellie said she hadn’t seen that much snow in three years. She said playing in the snow is fun because “you can build a snowman and throw snowballs.”

Snow was already accumulating Sunday night on Interstate 15 near Jean, the weather service posted. Northbound I-15 in Mesquite was closed due to poor road conditions Sunday night, according to Mesquite police.

Shortly after 10 p.m., the weather service tweeted that a trace amount of snow had been recorded at McCarran International Airport, where official measurements for Las Vegas are recorded. It was the first measurable snow since Dec. 17, 2008, Kryston said.

That day, the airport received 3.6 inches of snow, Kryston said.

Sunday night’s low is forecast at 34 degrees, she said.

But don’t stash your winter coats away just yet, meteorologist John Adair warned. More snow could fall on the valley later this week.

“It’s going to be an abnormally cold week,” Adair said.

Even after the winter weather advisory expires, there’s a lingering chance of some isolated snow or rain showers across the valley Monday, Kryston said. The high for Monday is expected to reach 48 with an overnight low near 30.

Cell phone pictures don’t do it justice. But by Vegas standards, it’s really coming down. And sticking! Here’s a clip from just now, filmed at @WestCareerTech, close to Red Rock (where there are still street lights) pic.twitter.com/PTlUqLMb4x

Tuesday will be mostly sunny with a high near 46 and an overnight low near 32, the weather service said. Skies Wednesday will be partly cloudy, with temperatures peaking near 47 and dipping to 31 at night.

There is a 30 percent chance of precipitation on Wednesday, Kryston said.

Another cold system is expected to slip into the valley late Wednesday and into Thursday, bringing with it “a good chance” of rain and snow in the valley, Adair said.

“This system could be even colder than the one dropping in today,” Adair said Sunday, adding that it’s too early for weather models to be certain.

Temperatures Thursday should peak about 45 before dipping to 34 overnight.

The weather service forecasts a 60 percent chance of precipitation Thursday — which could be rain, snow or a mix of both, depending on how cold it gets and the time of day — and a 20 percent chance Friday. The system should move out of the valley Friday, making way for partly cloudy skies in the afternoon and a high near 47.

My daughter having fun in the snow ☃️❄️ with her neighborhood friend. @reviewjournal #vegasweather pic.twitter.com/Uc7bVnOWsM

The high this time of year is normally 63, about 10 to 15 degrees above than the high temperatures forecast this week.

While it’s normal for the valley to see snowfall one or two days each winter, Adair said the prolonged nature of weather patterns in western Canada and the Gulf of Alaska this winter have made it possible for the storms to reach Southern Nevada.

“This February has been unusually active,” he said.