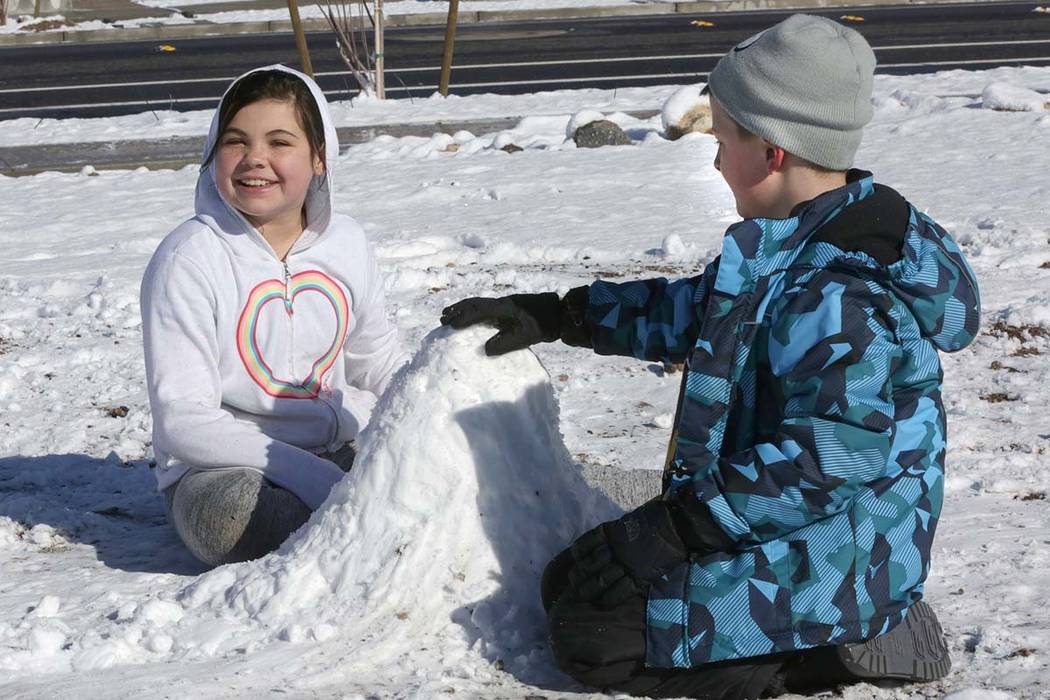 Onyx Wight, left, and Chris Guagialano build a snowman in Henderson after a winter storm dropped snow in the Las Vegas Valley on Monday, Feb. 18, 2019. More snow is on the way this week for the valley. (Michael Quine/Las Vegas Review-Journal) @Vegas88s

A seemingly once-in-a-blue-moon snowstorm could befall the Las Vegas Valley for the second time this week, bringing another chance for sledding and Instagram photos of snow-covered cactuses.

While meteorologists have “pretty low confidence” in snow chances for the central valley, a winter storm from Wednesday evening to early Friday could drop some snow on Summerlin and higher elevations in the western parts of the valley, National Weather Service meteorologist Jenn Varian said Tuesday.

Residents already saw a rare event Sunday night, when up to 2 inches of snow accumulated in parts of the southern and western valley during a winter weather advisory. Another advisory will go into effect for the valley from 6 p.m. Wednesday to 4 a.m. Friday, Varian said.

“If anything, it should be predominately on the west side of the valley,” Varian said of the snow. “It’s possible that Red Rock Canyon and parts of Summerlin could see maybe an inch of snow.”

Red Rock Canyon has a slightly better shot of snow, as it falls under a winter storm warning instead of an advisory, Varian said. The Spring Mountains, Lincoln County and northwest Arizona also fall under the warning, meaning more precipitation is expected.

Most of Clark County and northeast San Bernardino County in California will also be under the advisory, the weather service said.

The Nevada Department of Transportation is prepared to address any possible road issues the forecasted storm might present, said spokesperson Tony Illia.

NDOT will have a pair of snow plows and 50 tons of deicer — “Ice Slicer” — ready to go Wednesday in an attempt to avoid the hours-long shutdown Interstate 15 experienced Monday morning along a stretch of the highway between St. Rose Parkway and the Nevada-California border due to icy conditions.

Ice Slicer is an all-natural, high-performance deicer containing 90 percent sodium chloride and over 60 additional trace minerals. It de-bonds ice from the road surface 65 percent more effectively than standard white salt and melts up to double the snow and ice after one hour, Illia said.

“However, timing of application can be tricky,” Illia said. “Wet roads can turn into icy within 15 minutes. So, apply Ice Slicer too soon and it can wash away; too late and it can be slow to de-ice.”

The snow possibilities come during an abnormally wet period for the valley. About 2.65 inches of rain have been recorded since Jan. 1; the yearly average at this time is 1.03 inches, Varian said.

Varian said if the midweek storm does bring snow, it will be comparable to Sunday night. Though about an inch might accumulate, it’s not expected to stick around long.

Snow could fall during the day on Thursday, and parents can check if schools will be affected on the Clark County School District’s website and social media accounts, district spokesman Mauricio Marin said.

Portions of Lake Mead National Recreation Area could see up to 2 inches of snow, while parts of Interstate 15 near the California border and Mesquite could see up to 4 inches, the weather service said.

But before the winter storm moves in, temperatures are expected to drop to about 30 in the valley Tuesday night, the weather service said

Northwest winds are expected to calm after midnight.

Wednesday will have a high of 50, with a 60 percent chance for rain and snow showers in the evening. The temperature is expected to drop to 35 overnight.

Precipitation chances increase to 80 percent during the day Thursday, with a forecast high of 45. Thursday night will see a low of 32 with rain and snow chances at 40 percent, which are expected to drop to 20 percent after midnight, Varian said.

A previous version of this story incorrectly identified a Clark County School District spokesman. He is Mauricio Marin.