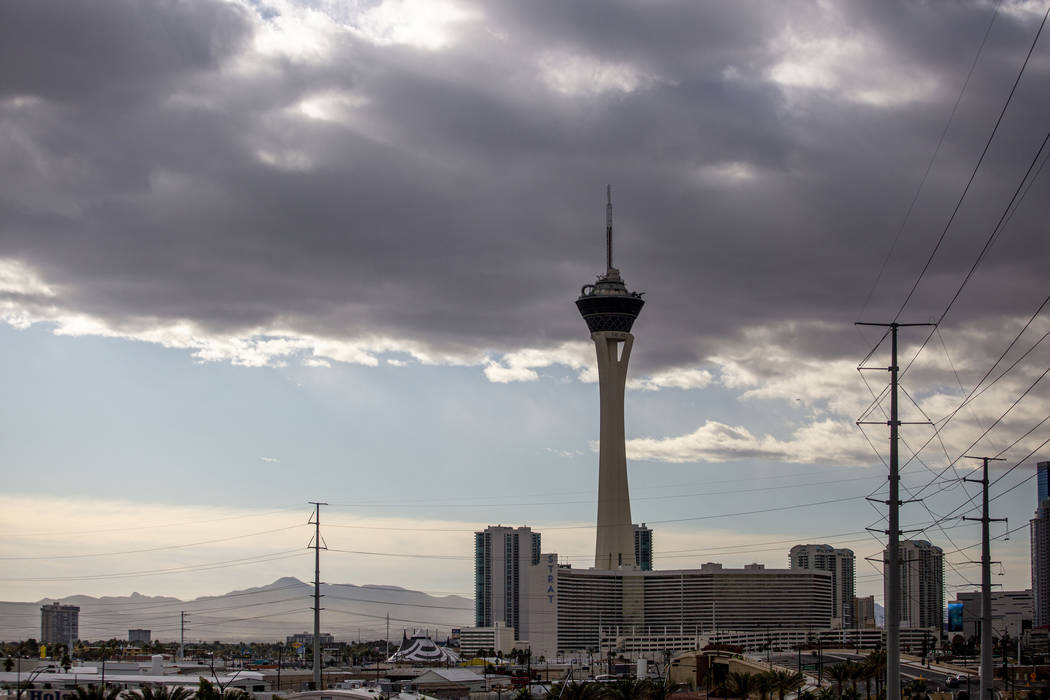 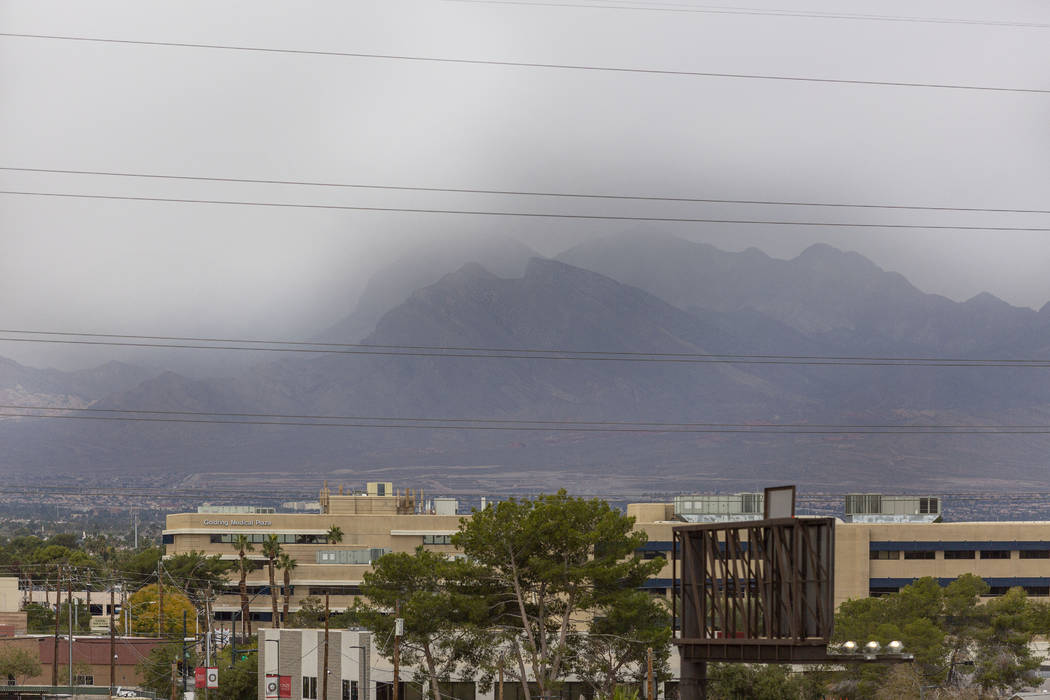 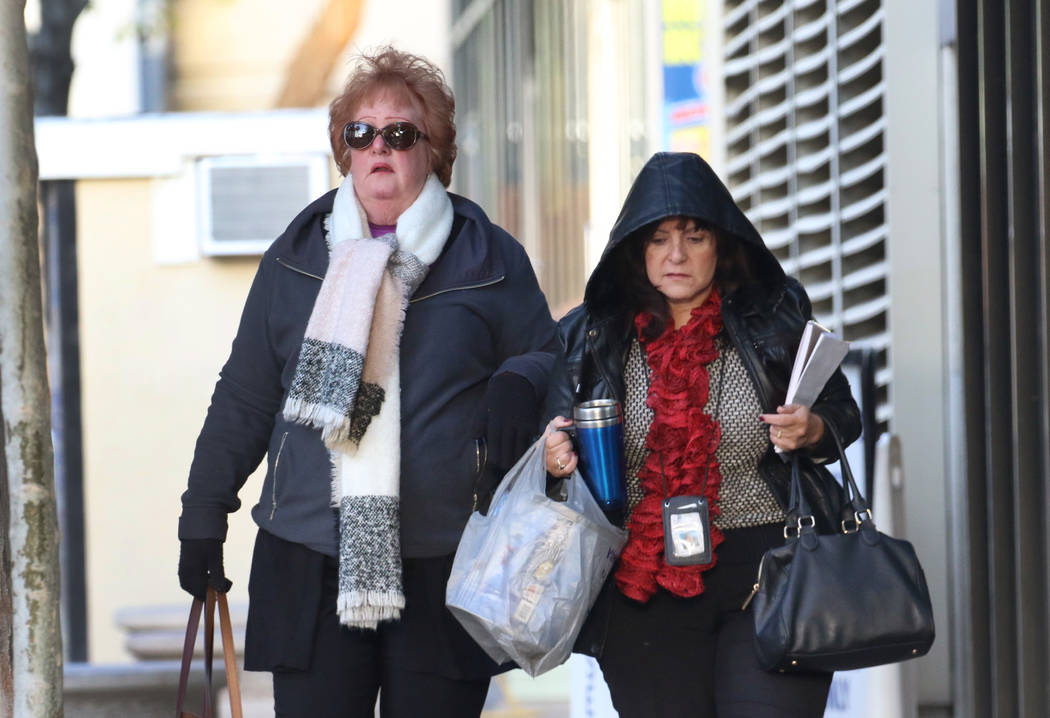 Pedestrians are bundled up as they walk along Lewis Avenue in cold weather on Wednesday, Nov. 27, 2019, in Las Vegas. (Bizuayehu Tesfaye/Las Vegas Review-Journal) @bizutesfaye 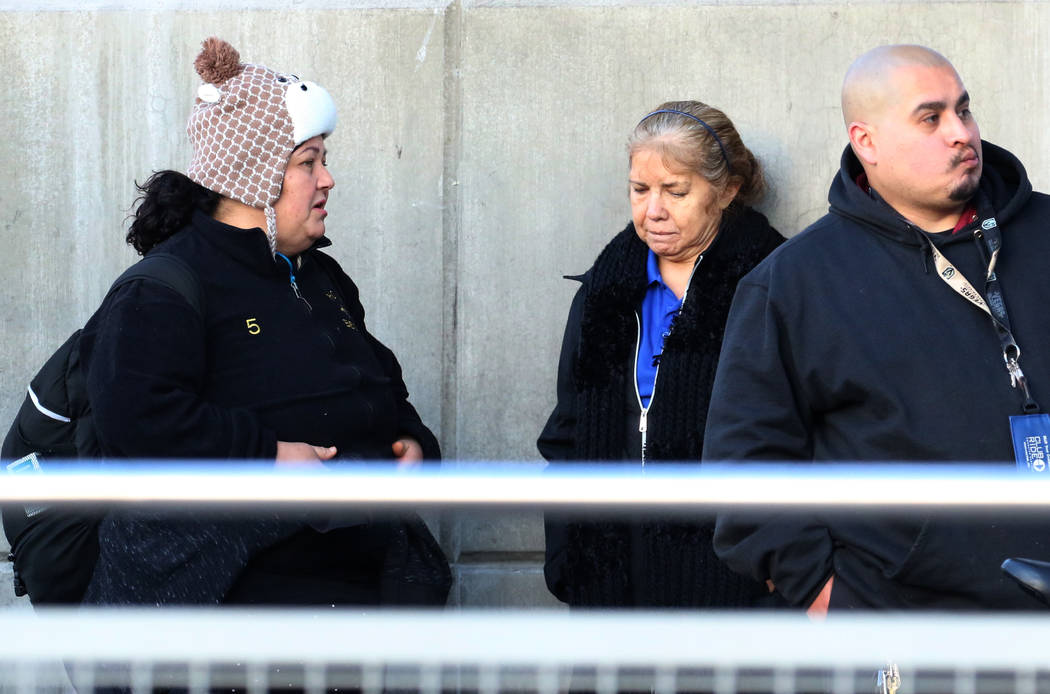 Commuters are bundled up as they wait for the bus in cold weather on Wednesday, Nov. 27, 2019, in Las Vegas. (Bizuayehu Tesfaye/Las Vegas Review-Journal) @bizutesfaye 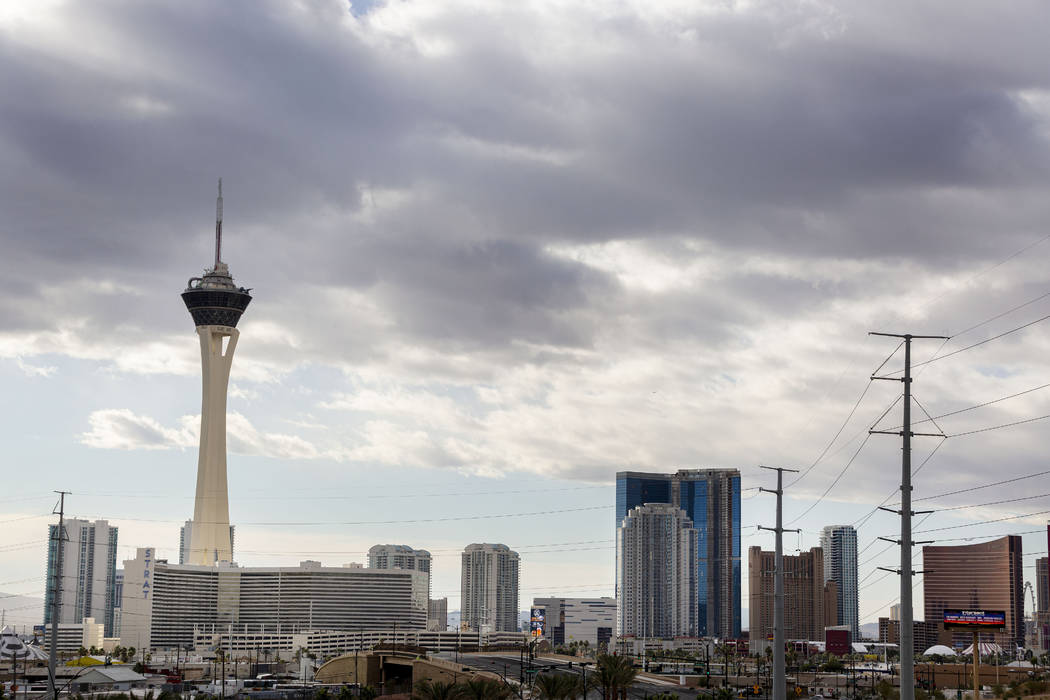 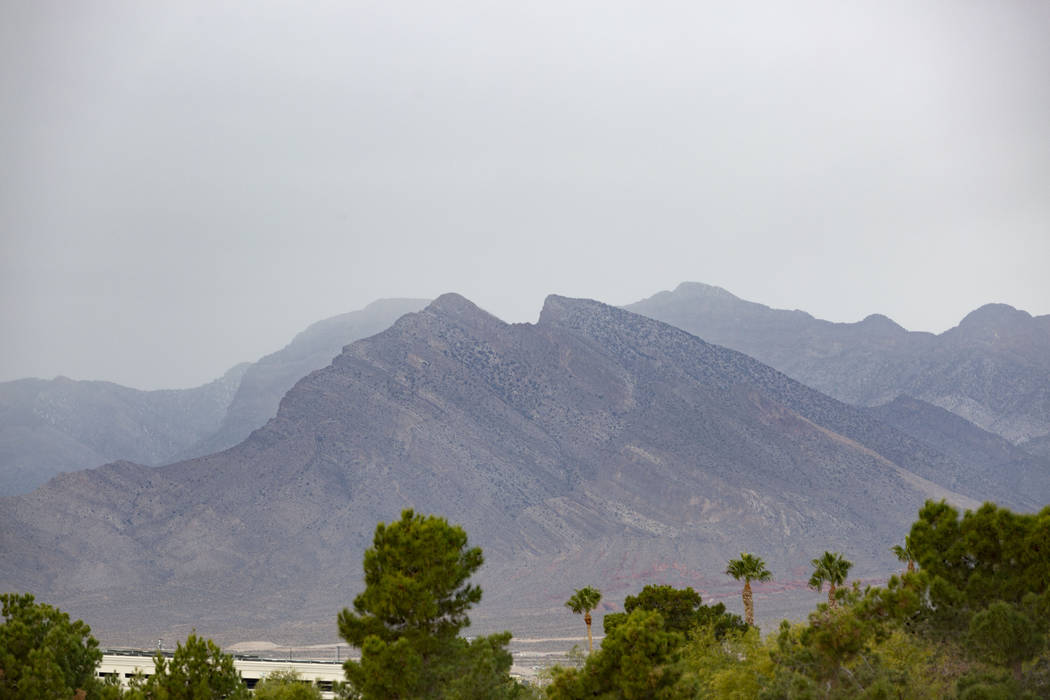 Thanksgiving is expected to bring up to 2 feet of snow in the Spring Mountains and rain in the Las Vegas Valley, according to the National Weather Service.

The storm blew in early Wednesday with snowfall in the Spring Mountains and Sheep Range near Las Vegas. The storm is expected to bring several days of rain at lower elevations, the weather service said.

As of Wednesday afternoon, a few inches of snow had fallen in the mountains, meteorologist Alex Boothe said. Wednesday night could bring another 5 to 8 inches, and up to 2 feet of snow is expected to fall on Thanksgiving.

Flurries were possible as low as 3,000 feet, she said, and residents in Summerlin said flakes were falling but not sticking there early Wednesday. There was a better chance of snow covering the ground in Centennial Hills and Summerlin Wednesday night and into Thursday, said meteorologist Chris Outler, but it would be short-lived once the rains resume.

“We’re not expecting anything really heavy, a few hours of light rain in the afternoon and heavy rain (Thursday),” Outler said.

Meteorologist Alex Boothe said more rain showers should move into the valley by Wednesday evening, and “the west side might see a couple light flurries embedded with the rain.”

The valley has a 90 percent chance of precipitation Thanksgiving afternoon through the early evening, he said.

The snow has started on #MtCharleston with over 2 feet possible today. Chains or snow tires currently required on all mountain roads.https://t.co/e7CjGcX2Og pic.twitter.com/jK4hdSiuDD

Because of the expected heavy snowfall in higher elevations and winds gusts up to 60 mph, mountain travel to and from the Las Vegas region could be treacherous. The weather service advised motorists to consider alternate routes or adjust planned travel times.

A winter storm warning was issued for parts of Clark County — though not in the Las Vegas Valley — and adjacent counties until 4 a.m. Friday.

Very strong wind gusts will be a concern in the higher elevations. Tree damage and power outages could result.

A wind advisory was issued for the lower regions of Mohave County and Lake Mead Recreation Area from 10:30 a.m. to 7 p.m. Wednesday with gusts predicted to reach as high as 50 m.p.h.

Windy conditions in Las Vegas caused minor delays for flights departing McCarran International Airport on Wednesday morning, including gate holds and taxi delays of up to 45 minutes, according to the Federal Aviation Administration’s website. Departure delays were down to 15 minutes by 11 a.m.

Arriving flights also were experiencing airborne delays of up to 15 minutes.

For the 180,000 people expected to drive to Las Vegas this week, Interstate 15 between Las Vegas and Southern California remained dry Wednesday morning. Outler said the weather service was predicting rain and potentially snow near Mountain Pass in California.

Owens Valley, about 200 miles northwest of Las Vegas, woke up to a white desert after snow began to fall just before 8 a.m. Wednesday, the Weather Service said.

Farther north, 40 miles of Interstate 80 was closed Tuesday for about five hours near Tahoe, and possible blizzard conditions were possible later Wednesday and into early Thursday.

Two feet of snow had fallen by Wednesday morning in the region, and commercial trucks were prohibited in westbound lanes on I-80. Forecasters said snowfall from the “very cold and potent storm” would start in central and Southern Nevada late Wednesday, before intensifying Thursday and early Friday.

The Wednesday forecast for the Las Vegas Valley calls for a high near 55 with southerly winds 14 to 20 mph with gusts as high as 31 mph. The chance of some precipitation is 80 percent.

The overnight low will be around 41 accompanied by southwest winds ranging from 6 to 11 mph.

Highs on Thanksgiving are only expected to reach 54, with a morning low of 39, the weather service said. Wind speeds are expected to be 5 to 12 mph, with gusts up to 20 mph.

Friday has an expected high of 50 with an 80 percent chance of rain that “should quickly taper off Friday afternoon,” Boothe said.

The weekend is expected to see cloudy by dry weather over the weekend, with highs of 48 on Saturday and 56 on Sunday, which also has a 10 percent chance of rain. Monday’s high was forecast at 56.

Overnight lows through Monday will be in the mid to high 30s, the weather service said.

Contact Sabrina Schnur at sschnur@reviewjournal.com or 702-383-0278. Follow @sabrina_schnur on Twitter. Review-Journal staff writers Marvin Clemons, Mick Akers and Katelyn Newberg contributed to this report. Material from The Associated Press was used in this report. 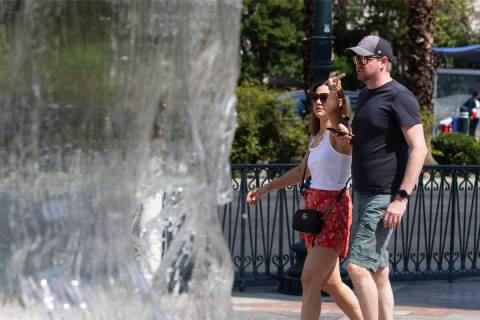 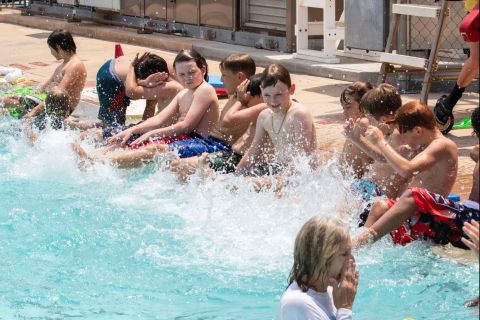 Thursday matched a decades-old record for highest daily temperature, as an excessive heat warning has been extended through Sunday in the Las Vegas Valley. 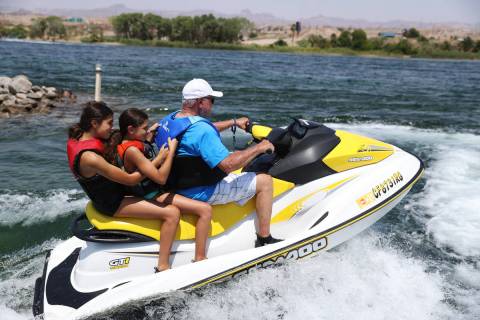 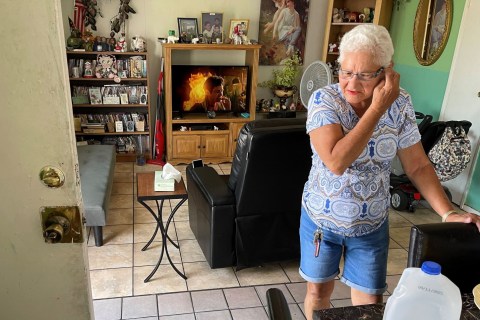 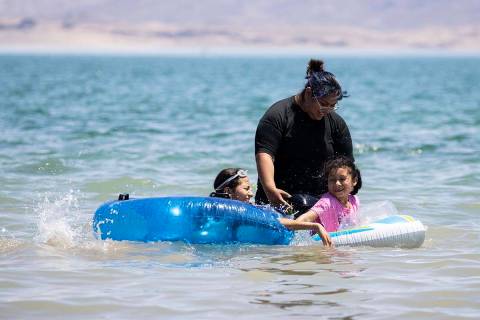 Temperatures in Las Vegas Valley continued to ascend Tuesday toward possible record highs in what the National Weather Service says is the hottest spell in eight decades. 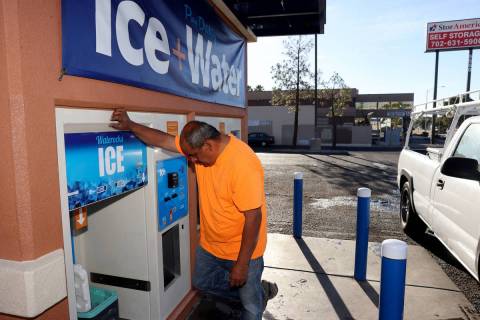 Temperatures in the Las Vegas Valley continued to climb Monday as a potentially record-setting heat wave tightened its grip on much of the western U.S. 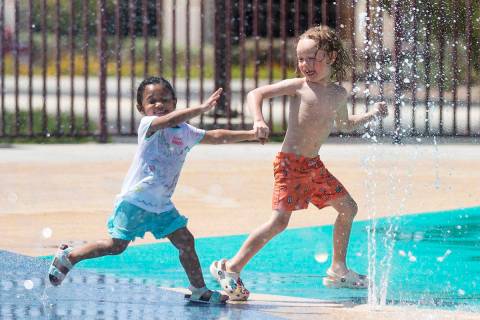 A massive high pressure system will bring near-record high temperatures to most of the Southwest this week. 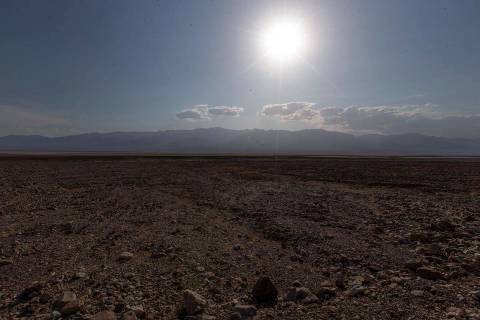 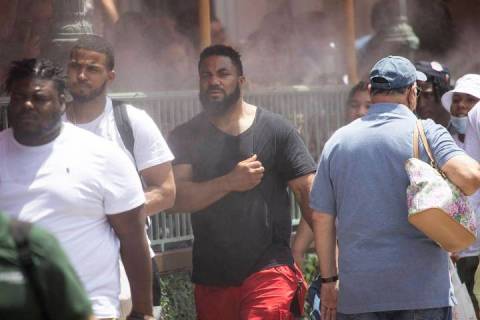 The start of potential record heat will be felt starting Friday in the Las Vegas Valley, according to the National Weather Service.