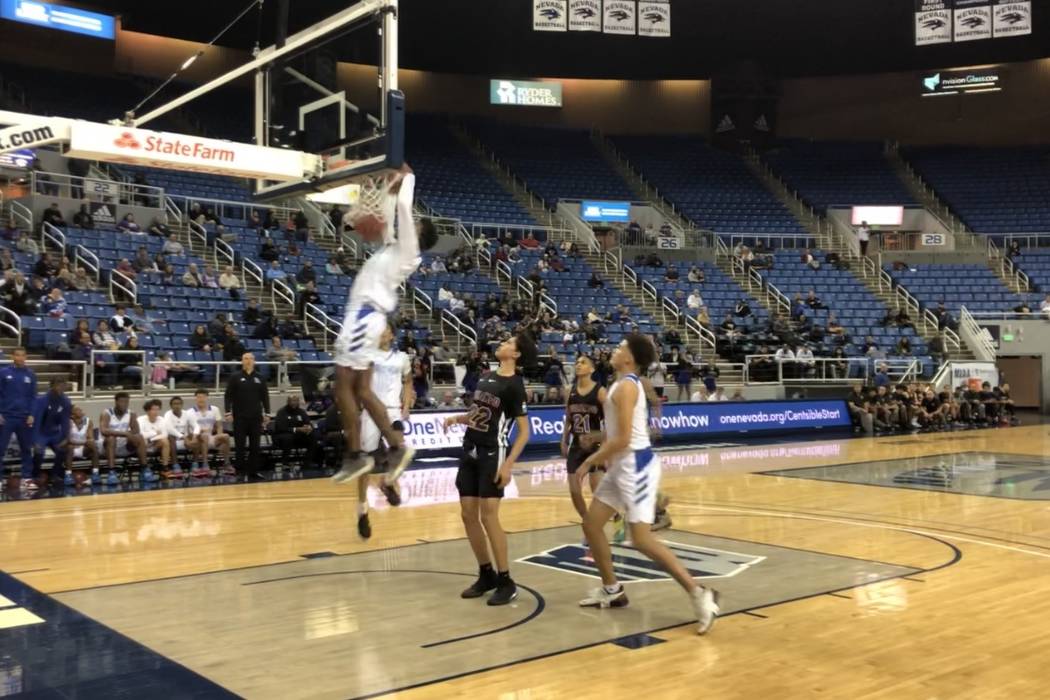 Desert Pines junior guard Dayshawn Wiley dunks during the second half of a 72-50 victory over Durango in the Class 4A state semifinals at Lawlor Events Center in Reno on Thursday, Feb. 27, 2020. Sam Gordon/Review-Journal

RENO — Desert Pines boys basketball coach Mike Uzan has won plenty in 21 years of coaching. He has eight region championships and three Class 3A state titles to show for it.

But there’s one thing missing from his mantle: the Class 4A state championship.

The Jaguars cruised to a 72-50 win over Durango in the Class 4A state semifinals Thursday at Lawlor Events Center and will play for the 4A title for the first time in school history. They will meet eight-time defending state champion Bishop Gorman at 9:10 p.m. Friday.

The Jaguars (21-9) qualified for the 4A state tournament last season in their first year playing in the classification, but lost to Clark in the quarterfinals. But the majority of the rotation returned, including Uzan’s son, Milos, a star sophomore point guard, Georgia football recruit Darnell Washington and junior swingman Dayshawn Wiley. And junior forward Anthony Swift was eligible this season after transferring from Durango

Milos Uzan controlled the pace Thursday, and the Jaguars’ size and length disrupted the Trailblazers’ rhythm. He finished with 24 points, and Wiley scored 12.

“This has been the goal since the beginning of the year,” Wiley said. “Probably since last year.”

That attitude paid off Thursday.

Taitz, playing for the first time since November, made back-to-back 3-pointers in the fourth quarter of the Gaels’ rout of Spanish Springs (22-6). He will suit up Friday for the final time in a Gorman uniform before heading to Stanford in the fall.

Gorman coach Grant Rice was elated to see Taitz back on the floor.

“You expect a huge senior year,” Rice said. “It’s been tough, emotional. … Everybody seems to forget that he’s one of the best players in the state.”