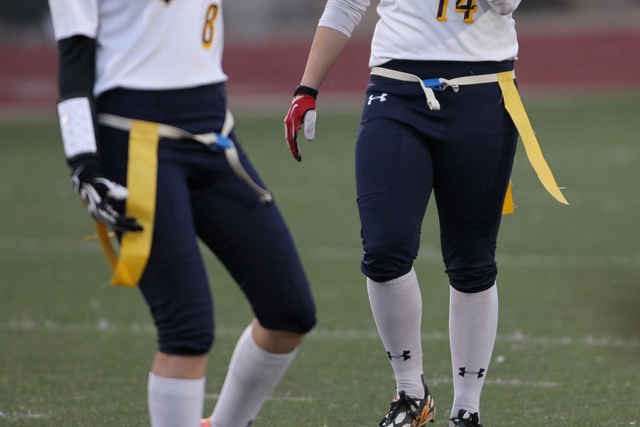 LeNae Thomas rushed for 185 yards and two touchdowns on 10 carries to lead Centennial’s flag football team to a 27-20 win at Legacy on Monday.

Centennial’s Chantey Dixon had eight tackles, and Kayla Kipp-Nobles had seven tackles and a sack for the Bulldogs.

Jayln Joule completed 14 of 28 passes for 221 yards and three touchdowns to lead Legacy. Mikaela Nunez and Tah’naja Perry each caught a scoring pass for the Longhorns.

Silverado’s Kahlia Bell caught a 20-yard TD pass from Kui-‘Puha Untalan, and Victoria Bravo and Sydney Lindsey each had a TD run for the Skyhawks.

Palo Verde 24, Arbor View 21 — At Arbor View, the Panthers built an 18-0 halftime lead en route to the victory over the Aggies.

River Espeleta completed 16 of 23 passes for 168 yards and three touchdowns for Arbor View. Reina Martin had six catches for 51 yards and two touchdowns, and Haylee Niemann caught a 60-yard TD for the Aggies.

Cimarron-Memorial 50, Shadow Ridge 19 — At Shadow Ridge, Tiarra Del Rosario had three touchdown passes and completed 17 of 22 passes for 224 yards as the Spartans defeated the Mustangs.

Del Rosario also rushed for 81 yards and a touchdown.

Haylei Hughes had a receiving touchdown and an 80-yard interception return for a touchdown, and Logan DeLong had 120 all-purpose yards with a receiving TD and a rushing TD for Cimarron.

Alyssa Karpinski added a receiving TD and a rushing TD for the Spartans, who led 30-12 at halftime.

Green Valley 25, Liberty 0 — At Liberty, Bella Cipili threw two touchdown passes and ran for another score as the Gators blanked the Patriots.

Makayla Montello had five tackles and two sacks for the Gators.

Sunrise Mountain 19, Mojave 6 — At Mojave, Jamile Cano and Kailey Lopez each had a rushing touchdown as the Miners defeated the Rattlers.

Marilyn Membreno threw a 60-yard TD to Cheyanne Johnson in the second half for Mojave.

Rhoades also rushed for 62 yards and a touchdown on seven carries. Shawna Slater led the Cougars with seven tackles.

Cheyenne 49, Western 12 — At Cheyenne, the Desert Shields posted a shutout in the second half as they defeated the Warriors.

E’Leseana Patterson completed 10 of 15 passes for 151 and two touchdowns. Angela Hammond rushed for 151 yards and three touchdowns on 12 carries, and E’Moni Albert had a receiving touchdown for the Desert Shields, who led 32-12 at halftime.

Fabray Elam ran for 178 yards and two touchdowns on 15 carries to lead Western.