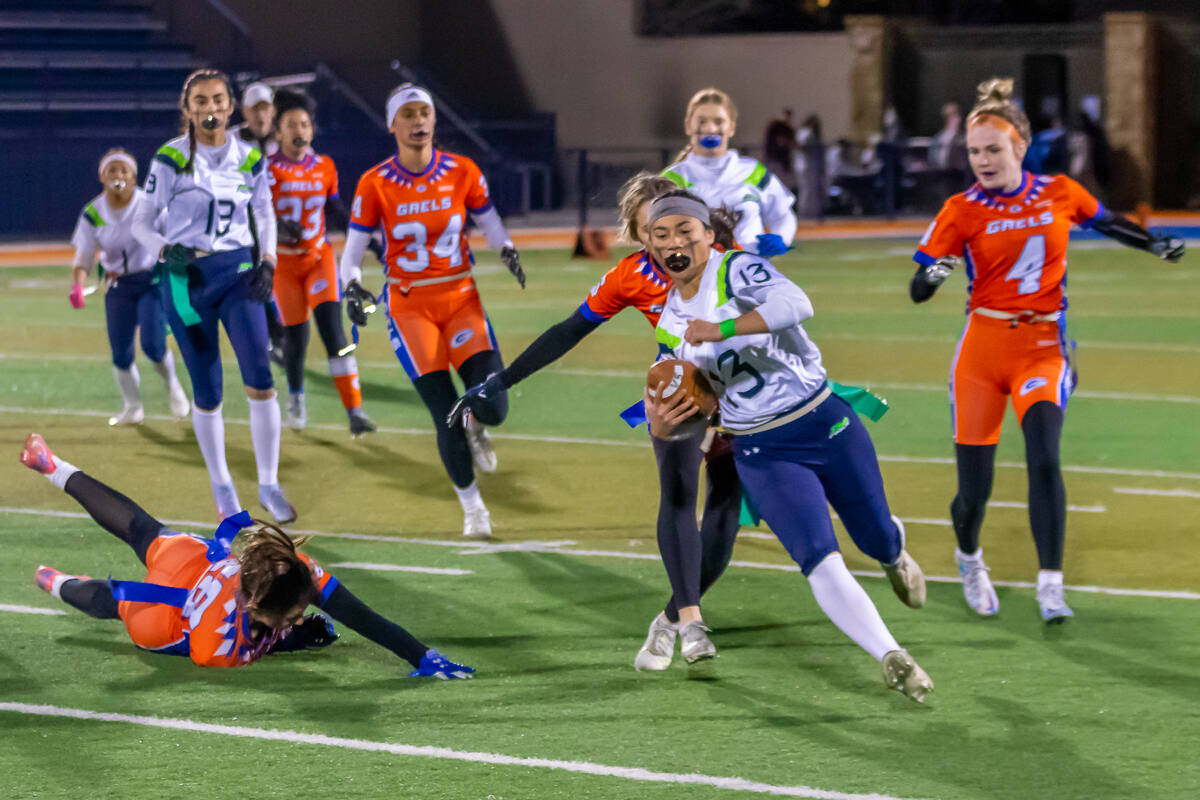 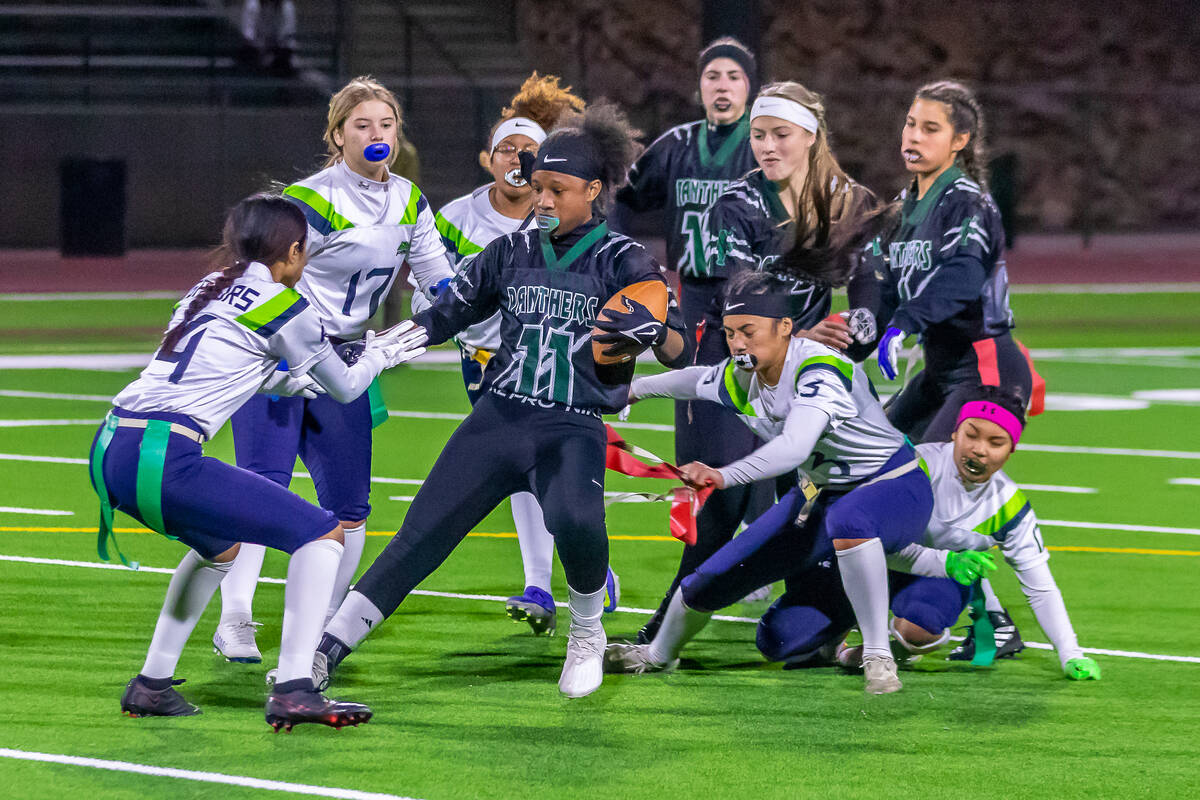 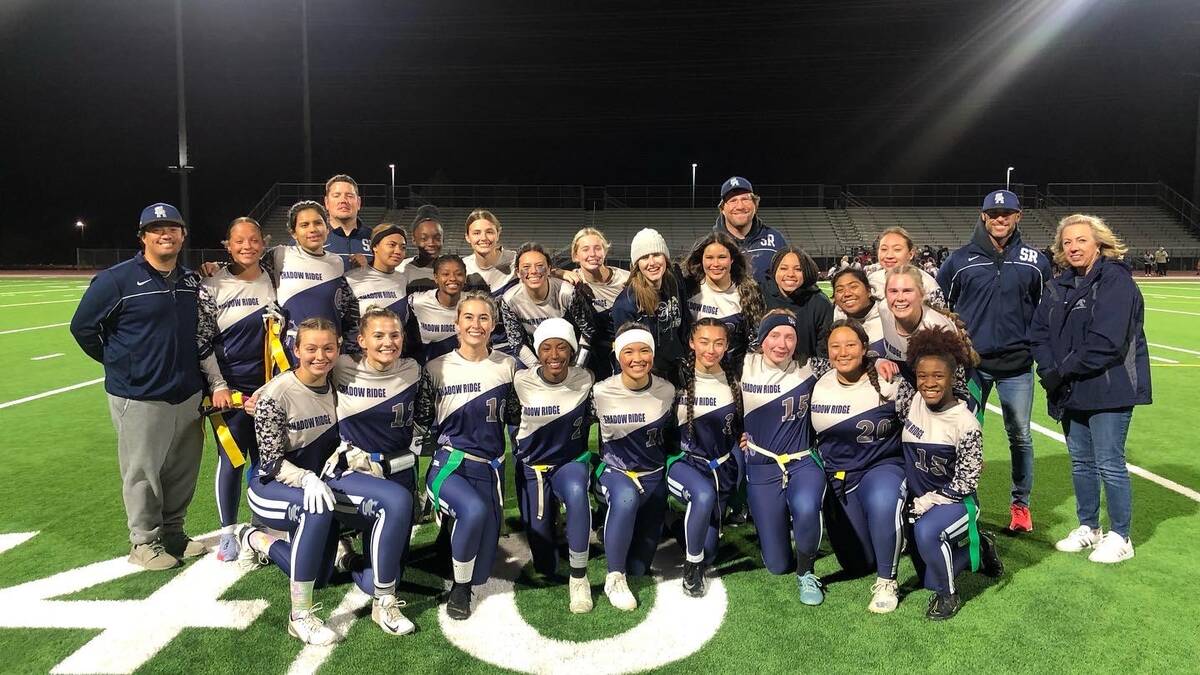 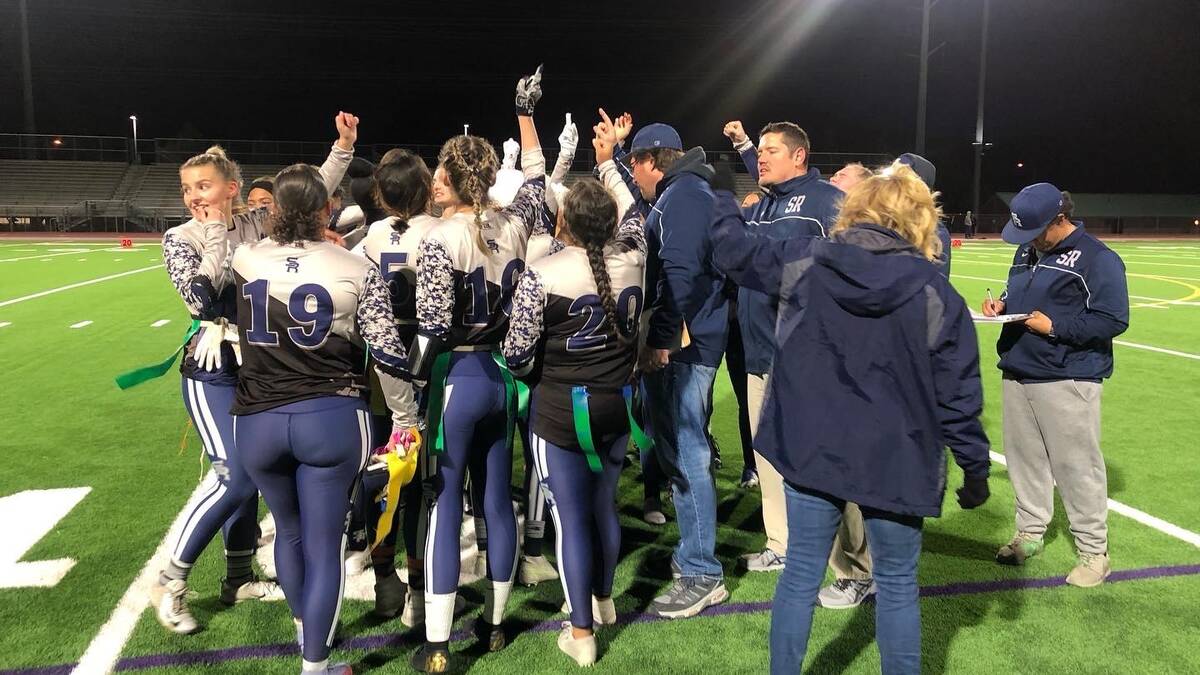 The Shadow Ridge flag football team huddles up after a playoff win. The Mustangs will host Green Valley for the Class 5A state championship Tuesday. (Missy Shipp photo)

After a flag football game between Green Valley and Shadow Ridge in the regular season, Mustangs coach Matthew Nighswonger joked that he wouldn’t be surprised if the teams ended up playing five times.

It’s not a joke anymore, as they will meet for the fifth time at 6 p.m. Tuesday at Shadow Ridge for the Class 5A state championship.

“It’s been an interesting matchup, and they’ve all been highly competitive games,” Nighswonger said. “I expect the same thing tomorrow night.”

To do so, it will need to slow Gators quarterback Soriah Tafua. The junior leads Green Valley with a 62.2 percent completion rate for 3,999 yards passing and 64 touchdowns against 14 interceptions, plus 2,555 yards rushing and 28 scores. She also has 68 tackles and a team-high 11 interceptions.

“Soriah is a great player, but what makes her special is how she lifts everybody up,” Green Valley coach David Torrez said. “She’s one of the most unassuming players we’ve ever had. You wouldn’t be able to tell she’s the best player on the team with her attitude. It’s cool to have a junior with those leadership skills.”

Shadow Ridge has spread the ball around a little more. Mikayla Brown has hit 58.6 percent of her passes for 4,940 yards and 64 touchdowns against eight interceptions, and Riyanna Johnson has rushed for 2,443 yards and 15 scores.

“In years past, we only had one or two girls we could rely on,” Nighswonger said. “This year we have several, and that makes it much more difficult for opponents to stop us. Our girls have improved exponentially, and that’s all a credit to the work they’ve put in.”

Shadow Ridge reached the state title game in 2018 before losing to Coronado 33-18. Green Valley hopes to become the first three-time state champion since the NIAA began sanctioning flag football in the 2016-17 school year.

“Another state championship for Green Valley would be amazing,” Torrez said. “We always talk about the process and practicing like a champion. This would be the culmination of another great season and the kids buying into what our program is all about.”