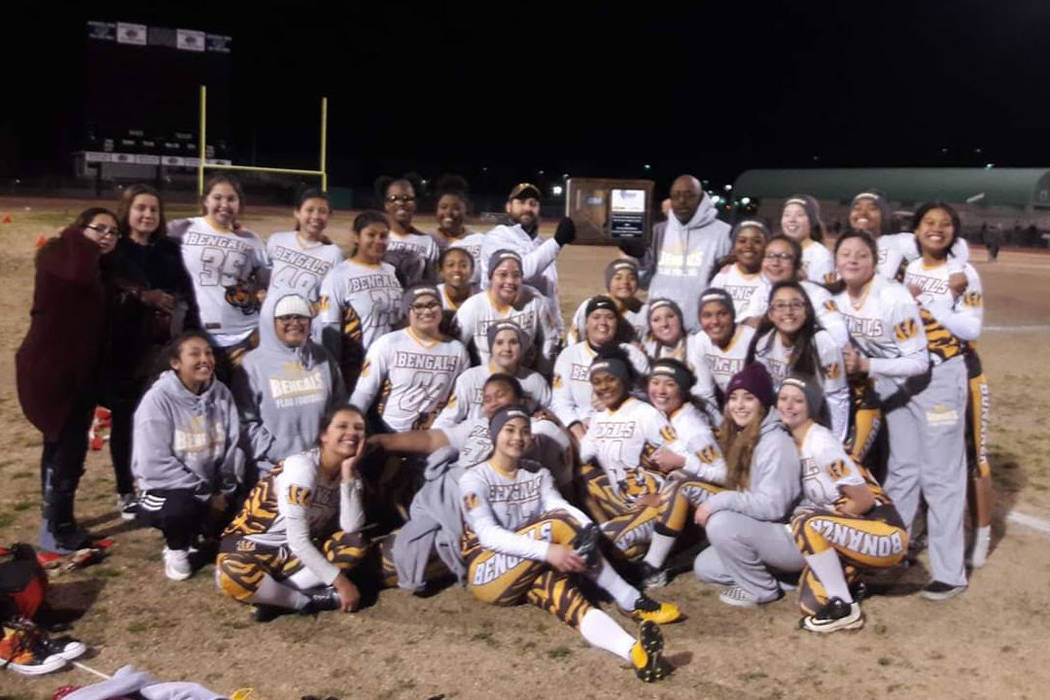 The Bonanza flag football team may get to liking the third time around.

“They’ve beaten us twice this season,” Bonanza coach Dion Lee said of Green Valley. “We went to double overtime in the first game of the season, when all we needed was one extra point in regulation. Now we get to play them again in the last game of the season.”

Perhaps that third time will be the charm again as it was against the Panthers. On Tuesday, Palo Verde was the team that struggled with extra points, missing both its chances.

The second, after Mya Boykin’s second touchdown catch of the game from Jordan Schnitz, could have tied the score at 13 with just less than 5 minutes to play. But Schnitz was downed by a blitzing defender who pulled her flag just before the Panthers quarterback released the ball.

“Boykin really stepped up,” said Palo Verde coach Rick Eurich, whose team lost in the region final for the fourth consecutive season. “And the thing is, we’ve had great success converting our extra points. We didn’t have it tonight. We can’t seem to get by this game.”

Bonanza jumped in front with just more than 6 minutes left in the first half, and it was an explosive play from Beck that got things moving.

After Palo Verde (13-6) had turned the ball over on downs at the Bengals 22-yard line, Beck took the handoff on Bonanza’s first offensive play and squirted up the middle.

“I didn’t know if I was going to get through there,” Beck said. “But once I did, I knew I was gone.”

After breaking through the initial line of defense, Beck easily outran the remaining Palo Verde defender, racing 58 yards for the first of her two TDs. Quarterback Cindylou Rasiang reached the ball over the goal line on a run to convert the extra point for the 7-0 lead.

“We missed some big tackles,” Eurich said. “And they are good enough that they can take advantage. You give them an inch, they’ll take a mile.”

Two possessions later, on a third-and-long from their own 20, Boykin snared a pass from Schnitz near the sideline. A Bonanza tackler whiffed on the flags as Boykin spun back into the field and sprinted down the sideline for a 60-yard scoring play with 1:26 left in the first half to cut the lead to 7-6.

Beck extended the lead to 13-6 with a 1-yard run with just less than 5 minutes left in the third quarter. Then Boykin answered again in the fourth, making a diving grab for a 21-yard score to close to within 13-12.

Boykin had three catches for 86 yards.

Rasiang threw a 5-yard touchdown pass to Ashley Vasquez with 1:36 to play for the final score, sending the Bengals into the state championship game.

Rasiang completed 10 of 28 passes for 154 yards. She was intercepted four times.

“People don’t realize,” Lee said. “They have been sleeping on Bonanza. We had the toughest schedule. We are a complete offense. Believing — that’s what it’s been all about all season. We can win.”