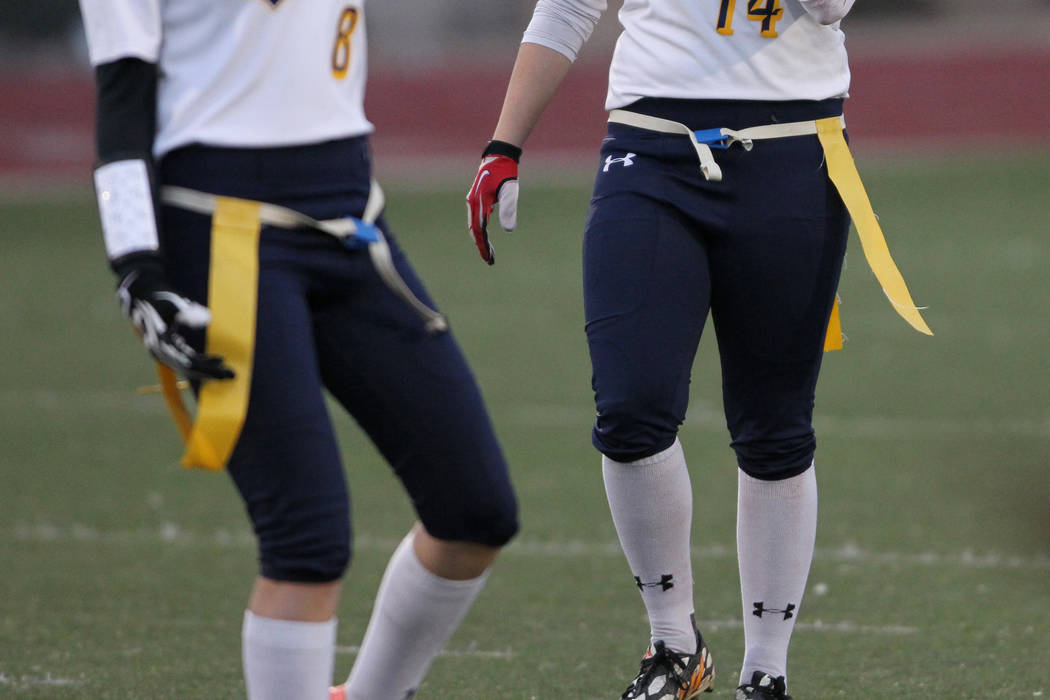 Hall completed 22 of 28 passes for 158 yards. Meg Tysee caught two TD passes, and Ashley Taibi had a TD catch for the Cougars.

Jennifer Haberstock completed 13 of 24 passes for 133 yards and two touchdowns for Green Valley. Mandolyn Scalisi and Anna Grave de Peralta each supplied a TD catch for the Gators.

Legacy 27, Rancho 0 — At Rancho, Jalyn Joule completed 17 of 23 passes for 251 yards and three touchdowns to lead the Longhorns over the Rams.

Nunez also had eight tackles, and Kyndall Thorns-Tureaud had seven carries for 66 yards for Legacy.

Tech 27, Basic 24 — At Basic, Taylor Ritayik had a hand in four touchdowns as the Roadrunners edged the Wolves.

Adriana Carrillo had five catches for 70 yards and a touchdown, and Chloe Dody had a TD catch for Tech.

Erin Adarve had seven tackles and an interception for the Roadrunners.

Canyon Springs 12, Eldorado 6 — At Canyon Springs, Alexis Mathis had 26 carries for 185 yards and a touchdown to help the Pioneers edge the Sundevils.

Taylor Brown threw at touchdown pass to Jaiden Guy for Canyon Springs, and Ajanae Lehmann had seven tackles and one interception.

Bishop Gorman 52, Pinecrest Academy 6 — At Bishop Gorman, Gwen Bobowicz scored five touchdowns to help the Gaels cruise to a victory over the Cougars.

Foothill 19, Liberty 0 — At Liberty, the Falcons shut out the Patriots.