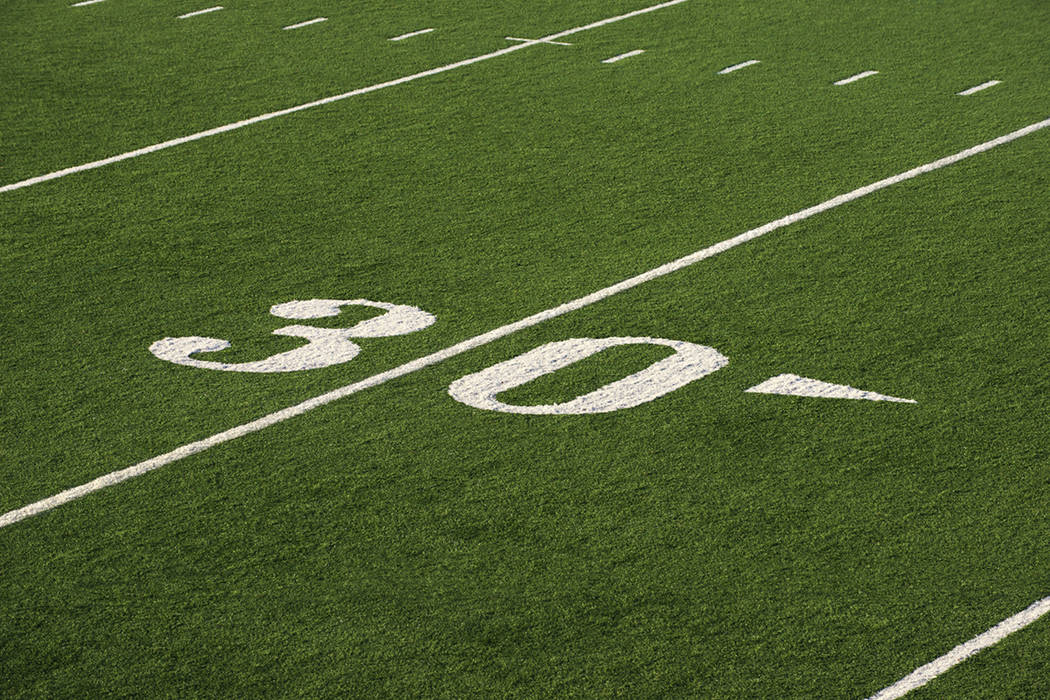 Jamie Kalaau-Sunia caught a touchdown pass from Aaliyah Medina in the third overtime Wednesday to lift Sierra Vista’s flag football team to a 39-33 win at Clark.

Kalaau-Sunia caught 11 passes for 176 yards and three touchdowns for the Mountain Lions.

Mariyan Muhammad rushed for 120 yards on 18 carries for Sierra Vista.

Jagayra Gomes completed 9 of 18 passes for 120 yards and three touchdowns and rushed for 137 yards on 22 carries to lead Clark.

Jaden Brown rushed for 103 yards and two touchdowns on 12 carries for Durango.

Legacy 34, Desert Pines 27 — At Legacy, Jalyn Joule was 20 of 29 passing for 251 yards and five touchdowns as the Longhorns turned back the Jaguars.

Jordyn Williams caught five passes for 78 yards and a score, and Cherish Carter caught a TD pass for the Longhorns, who led 20-6 at halftime and thwarted a late rally by Desert Pines.

Bonanza 21, Shadow Ridge 20 — At Shadow Ridge, Cindylou Rasiang threw two touchdown passes and ran for a score as the Bengals edged the Mustangs.

Rasiang completed 16 of 25 passes for 241 yards, and Ashley Vasquez caught seven passes for 124 yards and two scores for Bonanza.

Samantha Guerra caught 12 passes for 125 yards for the Mustangs.

Silverado 19, Desert Oasis 13 — At Silverado, Kennedy Power intercepted three passes and rushed for 76 yards on 17 carries to lead the Skyhawks over the Diamondbacks.

Maile Gardner had four catches for 74 yards and two scores, and Kathleen Fonua had a TD catch for Silverado.

Makayla Rickard rushed for a touchdown and threw a touchdown pass to Emma Coleman for Desert Oasis.

Virgin Valley 27, Western 0 — At Mesquite, Julia Ramirez, Shaylee Feltner and Macee Bundy each rushed for a touchdown as the Bulldogs blanked the Warriors.

Ramirez rushed for 97 yards on 14 carries for Virgin Valley, which racked up 316 rushing yards.

Boulder City 33, Valley 0 — At Boulder City, Makenna Arboreen caught six passes for 103 yards and two touchdowns and added a rushing score as the Eagles shut out the Vikings.

Emily Rinella and Ryann Reese each returned an interception for a touchdown for Boulder City.

Makaela Perkins completed 14 of 23 passes for 162 yards and the two TDs, and Jasmyn Curl had 10 carries for 137 yards for the Eagles.

Stephanie Tewart completed 12 of 20 passes for 232 yards and six TDs, and Arlene Salano added a TD pass for Del Sol.

Shelby Martin, Julie Robles and Jazmin Harralson each added a TD catch, and Mariah Barajas rushed for 67 yards and a touchdown on four carries for Del Sol.