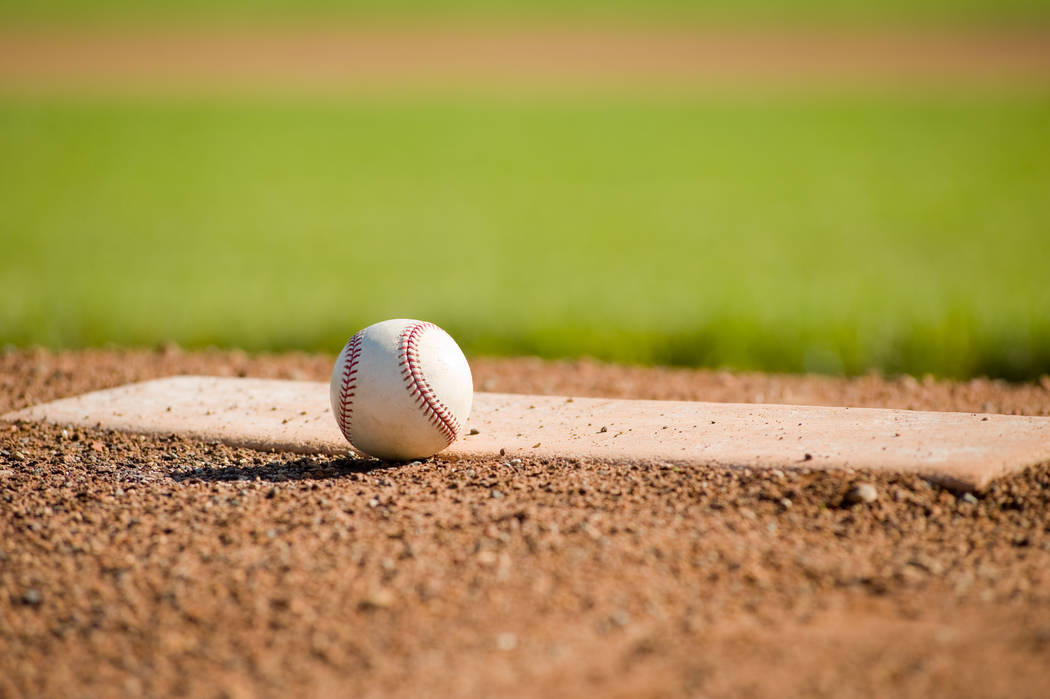 Hunter Martin singled to right-center field with two outs in the bottom of the seventh to score Trace Evans and give Basic’s baseball team a 9-8 home win over Coronado on Thursday.

Evans started the rally with a one-out double.

The Cougars had tied the game with a run in the top of the seventh on an RBI single by Cristian Herrera. Paul Myro came on with the bases loaded and no outs for Basic and got a pop up and a double-play grounder to end the threat.

Herrera was 3-for-4 with a double and four RBIs for Coronado.

Garett Lake went 3-for-4 with a solo home run and three runs, and Noah Hemphill was 2-for-3 with a triple and two runs for the Cougars.

Green Valley 4, Silverado 1 — At Green Valley, Joe DiGiacomo got Payton Ballard to pop out to left field with the bases loaded to end the game and give the Gators the win over the Skyhawks.

Drake Maningo allowed an unearned run on two hits in 6 2/3 innings to get the win. He struck out 10 and walked two.

Maningo hit a batter, and allowed a single and a walk to load the bases in the seventh. DiGiacomo came on and an error allowed a run to score and left the bases loaded.

Gavin Amelburu went 2-for-3 with a double, and Matt Uran was 1-for-2 with a triple, a run and an RBI for the Gators.

Matt Gilbertson went 1-for-3 with a double, a run and an RBI for Green Valley.

Rancho 7, Eldorado 2 — At Eldorado, Matthew Baughn went 2-for-2 with a double and two RBIs to lead the Rams past the Sundevils.

Angel Walker and Anthony Guzman each doubled and drove in a run, and Kagen Kennedy also doubled for the Rams.

Anthony Guzman pitched a three-hitter and fanned seven to pick up the win. The two runs charged to him were unearned.

Moapa Valley 4, Virgin Valley 2 — At Overton, Anthony Cornwall’s two-run double in the bottom of the fifth inning snapped a 2-2 tie and lifted the Pirates past the Bulldogs.

Chase Hadley allowed one earned run over five innings and fanned seven to earn the win. Cornwall pitched the sixth and seventh innings for the save.

Boulder City 11, Chaparral 6 — At Chaparral, Rhett Armstrong went 3-for-4 with four RBIs in the Eagles’ victory over the Cowboys.

Armstrong hit a two-run homer in the top of the fourth to put Boulder City up 8-1.

D.J. Reese was 3-for-3 with three runs, and Anthony Pacifico was 2-for-4 with an RBI for Boulder City.

Talon Greene was 3-for-4 with a double and an RBI, and Rodney Elosegui was 2-for-4 with two RBIs to lead Chaparral.

Connor Jarvis was 2-for-4 with two doubles and an RBI for the Cowboys.

Spring Valley 9, Centennial 5 — At Centennial, Nick Rupp went 2-for-3 with a double, home run and three RBIs to help the Grizzlies top the Bulldogs.

Jaxson Otis was 4-for-5 with a double and three RBIs, and Humberto Maldonado went 3-for-4 for Spring Valley, which scored in every inning but the third.

Austin Kryszczuk was 3-for-4 with a homer and three RBIs to lead Centennial.

Jake Rogers went 3-for-4 for the Bulldogs.

Shadow Ridge 12, Faith Lutheran 3 — At Faith Lutheran, Tyler Vizcarra went the distance and scattered six hits to lead the Mustangs over the Crusaders.

Justin Lee went 2-for-4 with a double for Shadow Ridge, and teammate Dillon Kathrein added a double.

Jeremy Aguirre was 1-for-2 with a run scored and an RBI for the Crusaders.

Palo Verde 7, Legacy 3 — At Legacy, Scott Cosby had a triple and a double to power the Panthers over the Longhorns.

Rick Guzman doubled for the Panthers, who led 6-0 after the top of the fifth.

Brandon Ahumada had a triple for the Longhorns.

Tech 12, Del Sol 2 — At Tech, Oscar Reynoso went 1-for-2 with three RBIs, as the Roadrunners defeated the Dragons in five innings.

Jose Leon went the distance to get the win. He allowed two unearned runs on two hits with five strikeouts.

Las Vegas 15, Canyon Springs 0 — At Las Vegas, Carlos Martinez was 2-for-2 with a double and four RBIs as the Wildcats routed the Pioneers in four innings.

Trey Chauncey allowed one hit and struck out five in three innings to get the win.

Liberty 18, Valley 3 — At Liberty, George Hanach went 2-for-4 with a double and three RBIs, and Kevin Clark drove in three runs to help the Patriots rout the Vikings in four innings.

Jacob Rogers was 3-for-3 with two RBIs and was a home run short of hitting of the cycle, and Ryan Meservey was 2-for-4 with two RBIs for Liberty.

Jose Becerra had a double for Valley.

Adelson School 17-19, Mountain View 2-3 — At Mountain View, Samuel Shain was 3-for-3 with a double and a grand slam in the second game to help the Lions to the doubleheader sweep.

Joseph Collins had a three-run double for Mountain View.

In the opener, Maxime Chaltiel was 3-for-3 with a double and an RBI to lead the Lions, and Katz went 2-for-4 with two RBIs.

Tyrell Brooks was 2-for-2 with a run for the Saints.

The Meadows 22-17, Calvary Chapel 6-2 — At The Meadows, Trey Covell earned the win on the mound and went 3-for-4 as the Mustangs routed the Lions in four innings in the opener.

In the second game, Brian Capp was 3-for-3, and the Mustangs scored 11 runs in the second inning to defeat the Lions in three innings.

Kaplan struck out seven to earn the win for The Meadows.