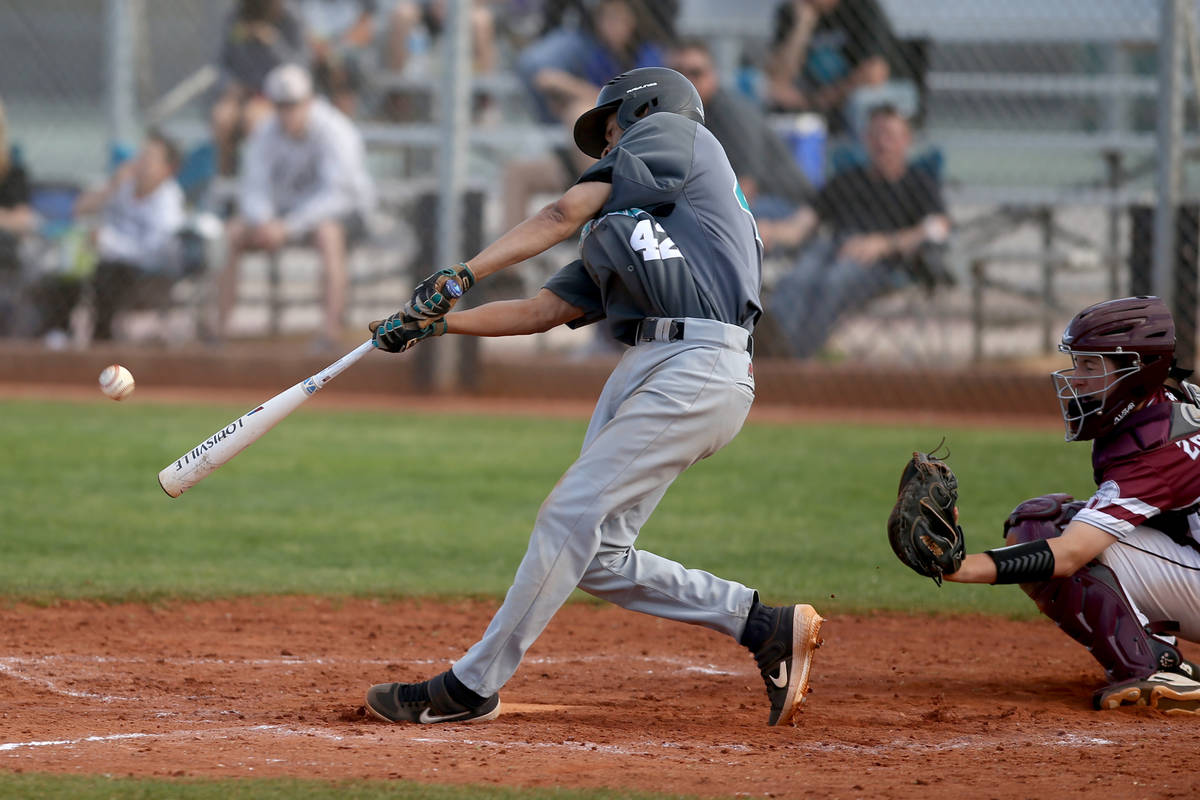 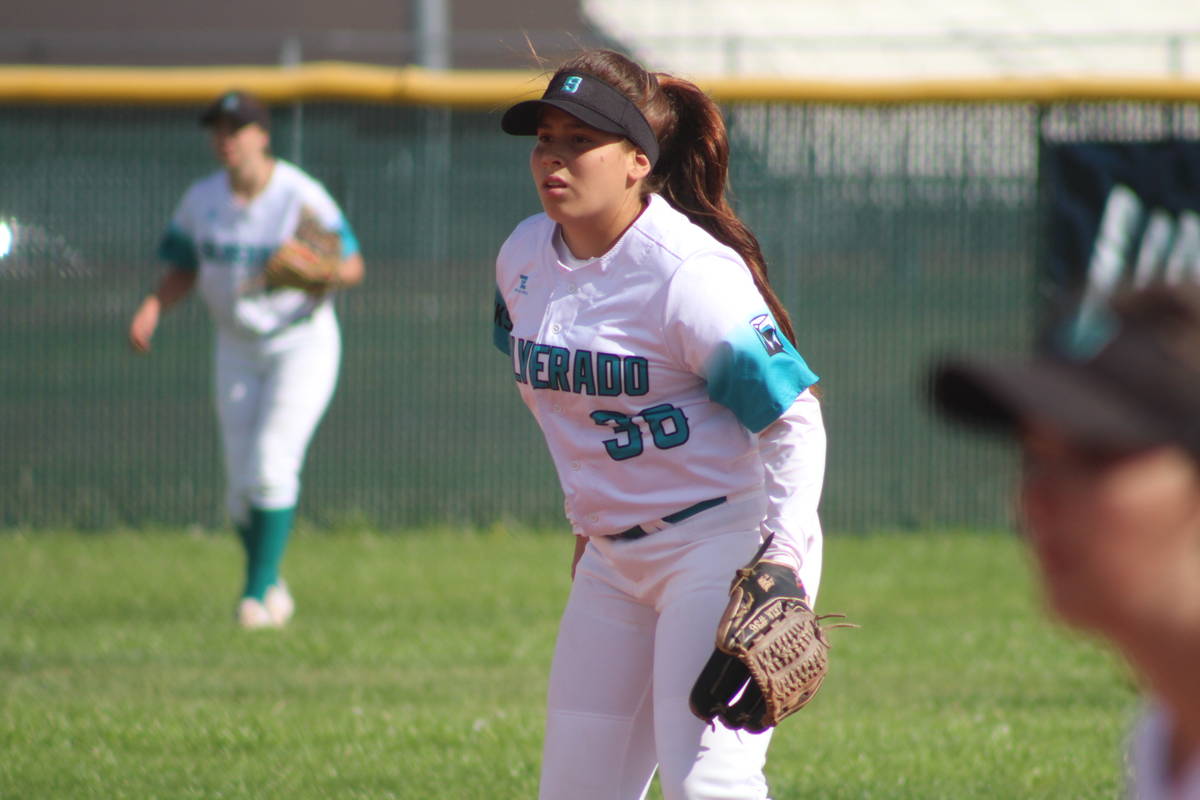 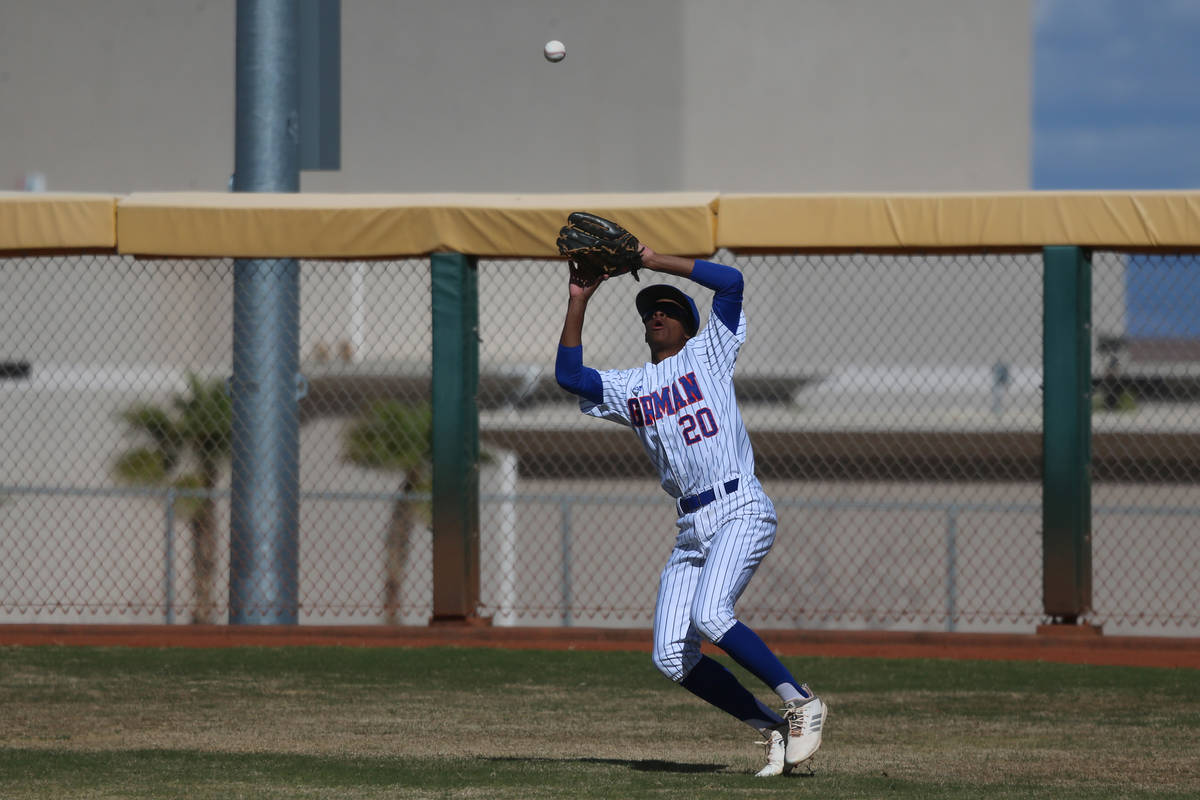 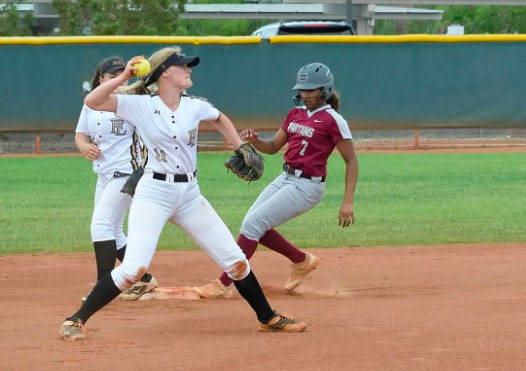 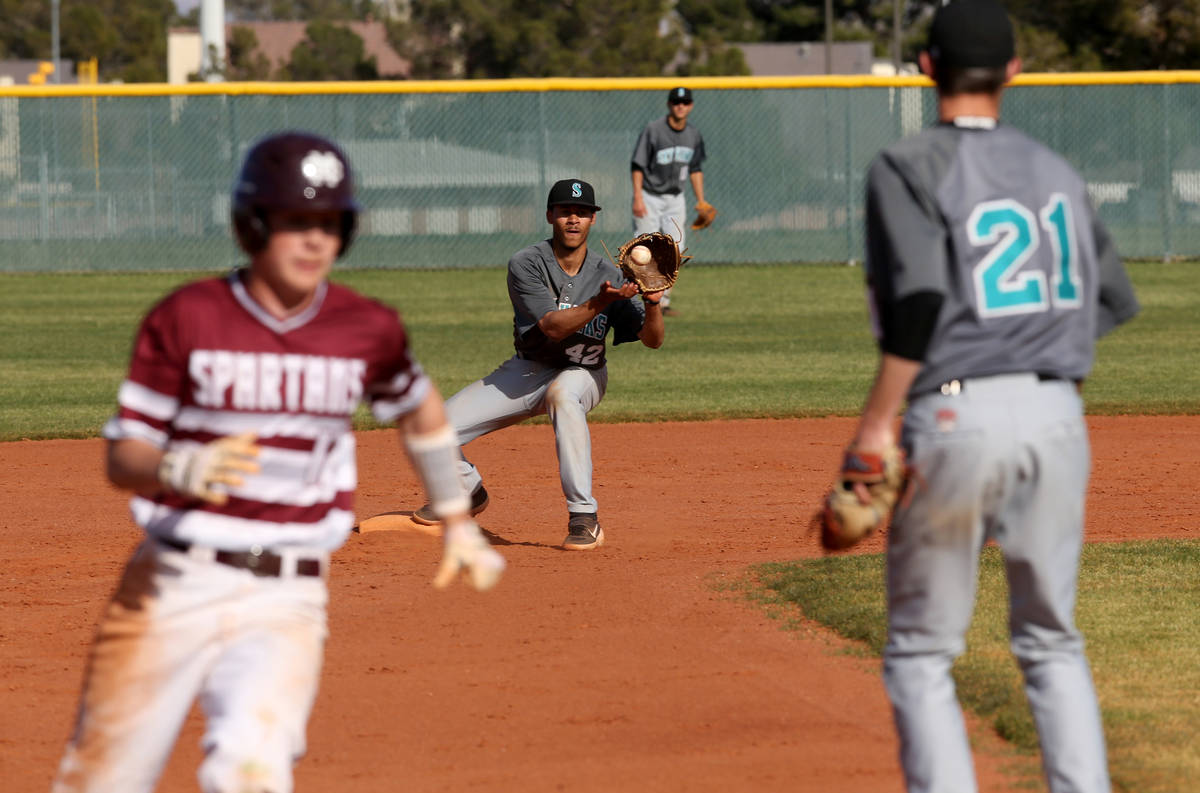 Silverado's Seton Cifelli (21) throws to second baseman Caleb Hubbard (42) to get one out of an attempted double play as Cimarron-Memorial baserunner Anthony Ortiz (12) rounds third base in the third inning of their baseball game at Cimarron-Memorial High School in Las Vegas Friday, March 22, 2019. (K.M. Cannon/Las Vegas Review-Journal) @KMCannonPhoto

All around the country, there were baseball and softball players hoping for that one last shot.

A shot to beat a rival, to win a championship, to have one more season of camaraderie with their teammates. For a select few, a shot to have that big senior year that would take them from an unknown prospect to college athlete or allow them to secure bigger and better scholarship offers.

The coronavirus has stymied those plans, as spring sports seasons have been put on hold for at least another month. The Nevada Interscholastic Activities Association has yet to rule out a return to competition, but the chance for seniors to make a strong final impression is all but gone.

Here are the stories of six local high school baseball and softball players and how the shutdown has affected their chances to play in college:

Gayman and Green were late comers to baseball. Neither had played until their sophomore year, but their potential was quickly evident.

Both hit over .400 last season and showed off their speed with more than 20 stolen bases apiece. Gayman was also beginning to find his stride as a pitcher. Unfortunately for him, however, his season ended long before the coronavirus shutdown when he tore an ACL in the fall as Democracy Prep’s quarterback.

Still, he had made enough of an impression that he will play both sports at Concordia, a Division III school in Minnesota, He said the rehabilitation for his knee is three months ahead of schedule.

“It’s hard to get looked at in baseball, but I was hoping to get one more chance this season,” Gayman said..

Green’s production as a junior was a massive leap from his sophomore year, when he had four hits. Green runs the 60-yard dash in less than 6.5 seconds, which allows him to cover plenty of ground in center field.

Green, who played slot receiver, running back, defensive back and kickoff and punt returner for the football team, is likely to sign to play football for Clarke University, an NAIA school in Iowa.

As far as baseball goes, the coronavirus has “put a dagger in that,” Green said. But he hasn’t closed the door on talking to Clarke’s baseball coaches when he gets there.

From the time she was 7, Guariglia has had one true love — softball. The Silverado second baseman has played year-round throughout her high school career.

Last season, she hit .386 with three home runs and 33 RBIs from the middle of the lineup. She was off to a fast start this season with a .471 average, three doubles and five RBIs in helping the Skyhawks to a 6-1 record.

“I’m a power hitter,” Guariglia said. “I always think I’m going to get a hit, no matter who the pitcher is, and I’m willing to go deep in the count.”

Guariglia, who is still unsigned late in the recruiting process, said she has four or five scholarship offers, but continuing what began as a promising senior season could have been the push she needed to make certain her college dreams would come true.

She hopes her scheduled visits to colleges in Washington and Oregon this summer will go on as planned and she will be able to make a selection. Regardless, she said, “I know who I am and that I’m working hard to give myself the best chance I can to play collegiately.”

Like most seniors, Gulley had a few goals for his final season.

The right fielder wanted to hit .400, make the all-state team and finally “hit one out.” As Gorman’s leadoff hitter last season, the self-described “gritty, scrappy” Gulley led the Gaels in on-base percentage, but he thought he had developed more tools for this season.

He also had the obvious team goals of beating rivals such as defending state champion Desert Oasis and Basic. He thought Gorman had the potential to be a top-10 team in the nation.

But chances for the Gaels to prove that will be limited, if they happen at all. Fortunately for Gulley, he had an offer from South Suburban College, a junior college in Chicago, and took it.

“I had the dilemma of choosing JUCO or (a small Division I school),” Gulley said. “I thought this would be the year to get the respect and recognition and have that sense of personal achievement. I feel bad for all the seniors affected by this.”

The good news for Whipple is she knows she wants to attend the College of Southern Idaho.

She even had plans to spend part of spring break with the team in Twin Falls, Idaho. But those plans have gone by the wayside, leaving Whipple in a somewhat precarious situation.

She’s confident she’ll end up there, but there is nothing definite given the coronavirus situation for any unsigned seniors.

“There’s no recruiting happening, but their coach has sent me a text to let me know he hasn’t forgotten about me,” Whipple said. “That is where I truly want to be, but I would expand my options if I have to.”

Whipple was hitting over .500 for the young season, coming off a .364 junior campaign when she also showed solid gap power with six doubles and two triples.

She said she’s still working during the “corona vacation” despite being cooped up inside most of the time.

“I’ve got a softball net and a tee in my garage, so I’m using that every day,” Whipple said.

In all of his years coaching Silverado’s baseball team, Brian Whitaker had never given a player the “green light” to steal bases. Until this season, when he gave it to Hubbard.

Whitaker said Hubbard’s intelligence and unselfish attitude made it easy to give him the green light and that Hubbard had a chance to break a couple of school stolen-base records with a full senior season.

Hubbard and the Skyhawks were off to a flying start. The second baseman was hitting .429 with a .478 on-base percentage. Silverado was 4-2 and won its Desert League opener 4-3 in eight innings over Basic, a state qualifier last season.

Hubbard has signed to play at the College of Southern Nevada. While he missed out on a final opportunity to go somewhere bigger, he’s pleased with how the recruiting process played out.

“It’s a big relief,” Hubbard said. “I know a lot of other guys are in the situation of trying to do everything they can their senior year. I’m fortunate to have already signed.”