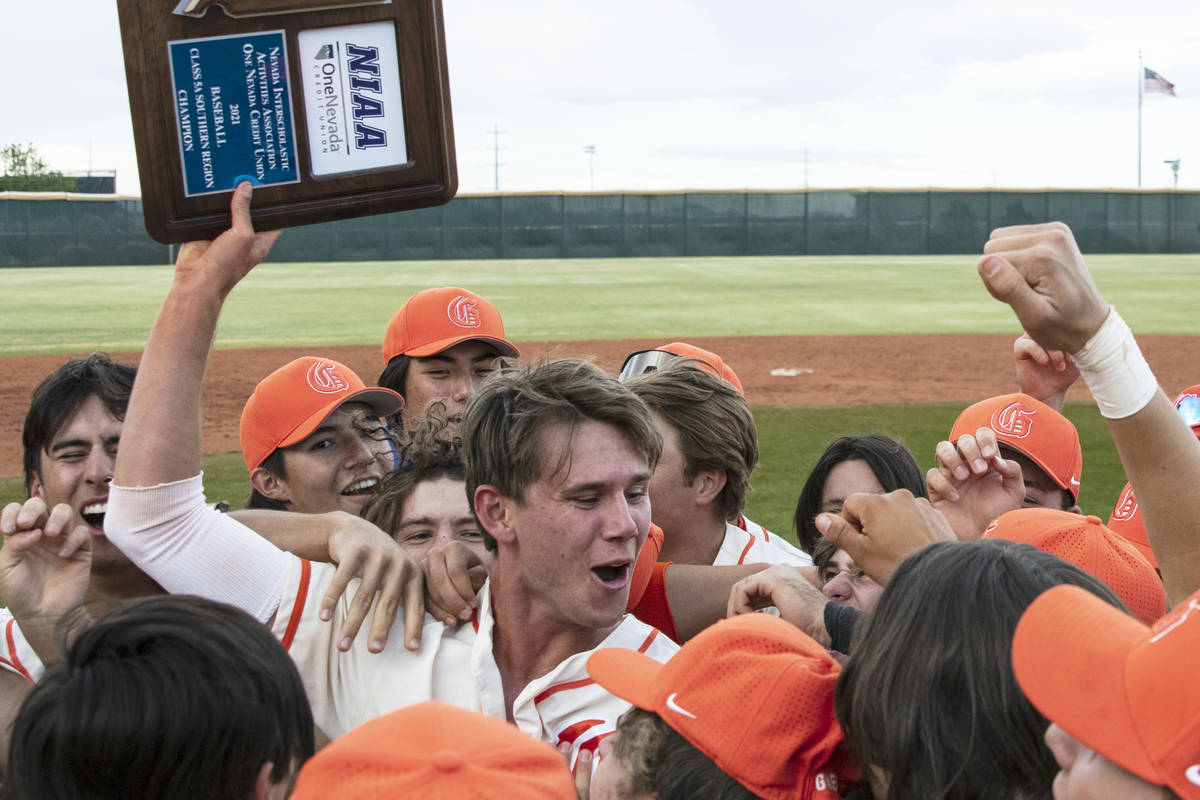 He has ideal size in a 6-foot-4, 195-pound frame that provides plenty of room to fill out. His power at the plate and arm strength from the outfield or on the mound is elite, and his speed allows him to cover plenty of ground in the outfield, stretch a single into a double and occasionally steal a base.

In short, he’s a five-tool player, the type that causes Major League Baseball scouts to swarm.

Whitaker, the Review-Journal’s Nevada Preps Player of the Year on the All-Southern Nevada team after a stellar senior season at Bishop Gorman, could hear his name called in the first round of the MLB draft, which will take place Sunday through Tuesday in Atlanta.

Whitaker is ranked No. 37 on MLB.com’s top 250 prospects for this year. Should that number hold, he’d be the top pick in the second round. The first round will be held Sunday, with rounds 2-10 on Monday and 11-20 on Tuesday in Atlanta.

“The best advice I’ve received is if you look at one mock draft, you have to look at them all,” Whitaker said. “I try not to look at them but just maintain confidence that my performance in the past year will be good enough.”

It certainly was for the Gaels, who claimed the Class 5A Southern Region championship with an 18-1 record. Whitaker was the main power source for the Gorman offense with a .491 average, four home runs and 30 RBIs.

He was also a calming influence on the Gaels when they trailed late in close games, and Gorman coach Gino DiMaria said he’s more impressed with Whitaker’s intangibles than his measurables.

“The most important thing that makes him special is his work ethic,” DiMaria said. “You don’t see many kids his age with that kind of work ethic. He has a presence on the team. He knows he’s a high-profile guy that could get drafted in the first round, but his teammates and being a team leader come first.”

For Whitaker, his senior year was all about having fun playing baseball. After all, he didn’t get to do that much during his high school career.

He played as a freshman at Arbor View, then was forced to sit out as a sophomore after transferring to Gorman and missed his junior year because of COVID-19.

“That made it that much more special this year with Gorman,” Whitaker said. “Baseball was of course the main priority, but having fun with the coaches and enjoying the moment instead of worrying about the future was amazing.”

Because Whitaker has signed with the University of Arizona, he knows he’ll have a decision to make when he is drafted. Does he start his professional career right away or head to Tucson and join a powerhouse Pac-12 program?

Either way, it’s a “good problem to have,” Whitaker said, and he’ll make the choice based on what’s best for his family.

As the draft approaches, he said he’s ready for it to be over, but he’s also making sure to enjoy the moment.

“It’s been a crazy last couple of months, and it is stressful,” Whitaker said. “But I’m super lucky that all my hard work is paying off. I’m nowhere near the end goal, which is of course to be in the Major Leagues, but it’s a great start.”