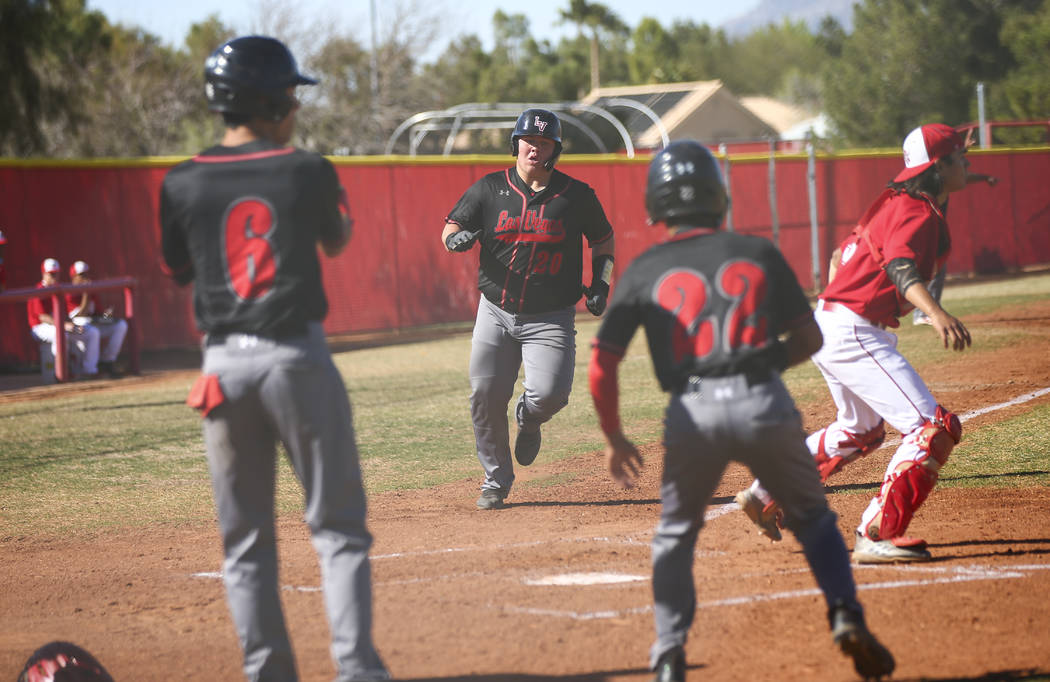 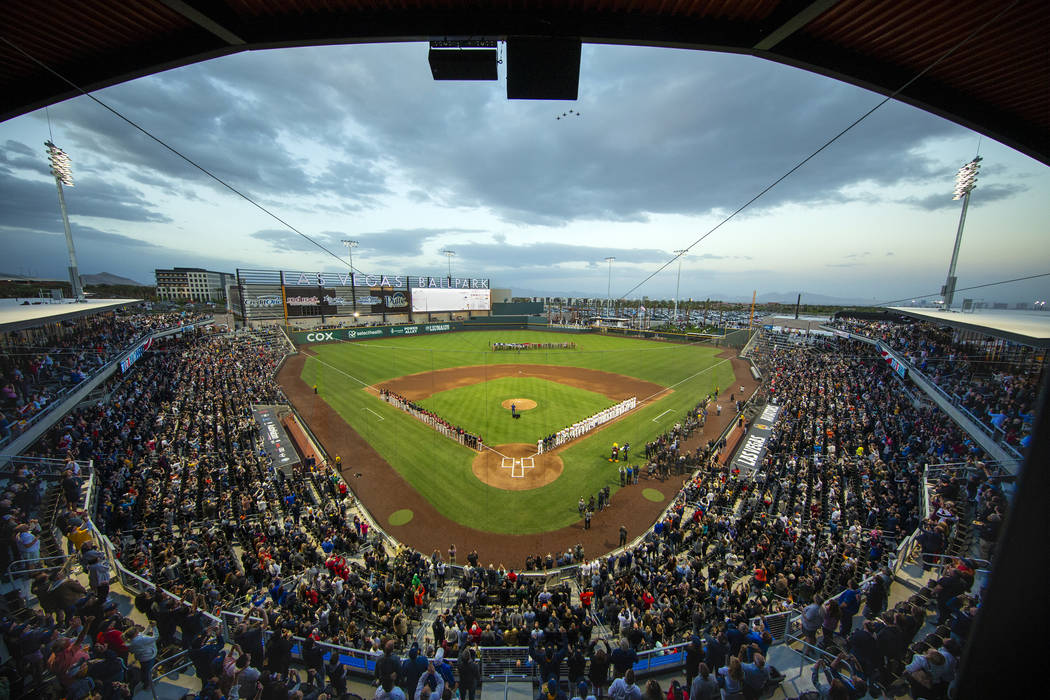 Four F-16 jets from Nellis Air Force Base fly over the ballpark with an American flag unfurled for the National Anthem at the Las Vegas Aviators home opener on Tuesday, April 9, 2019. (L.E. Baskow/Las Vegas Review-Journal) 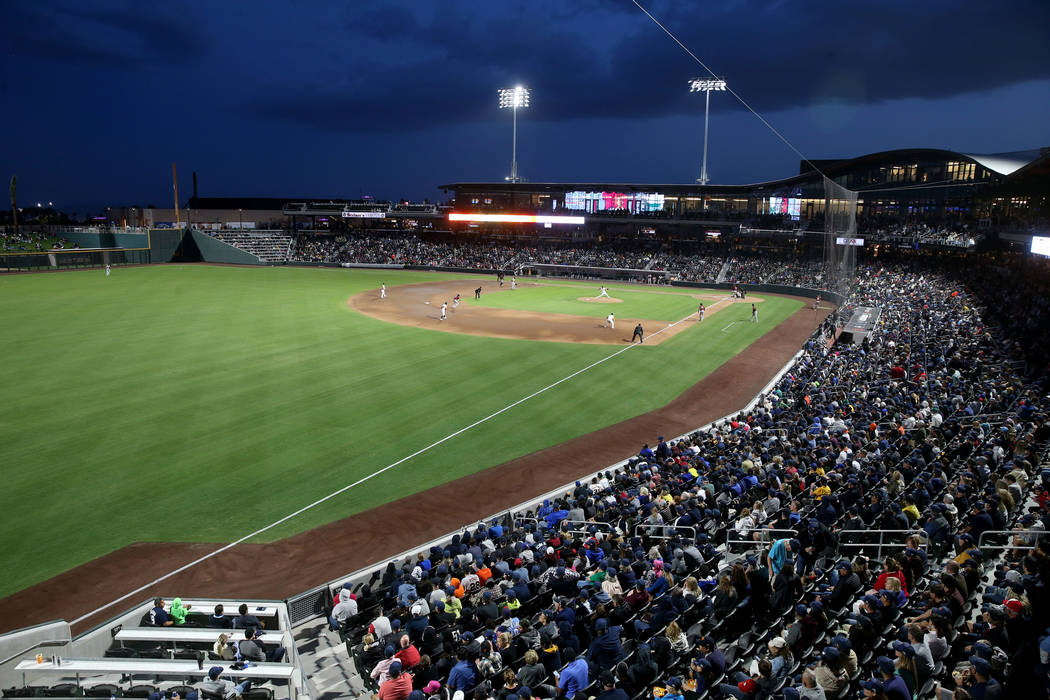 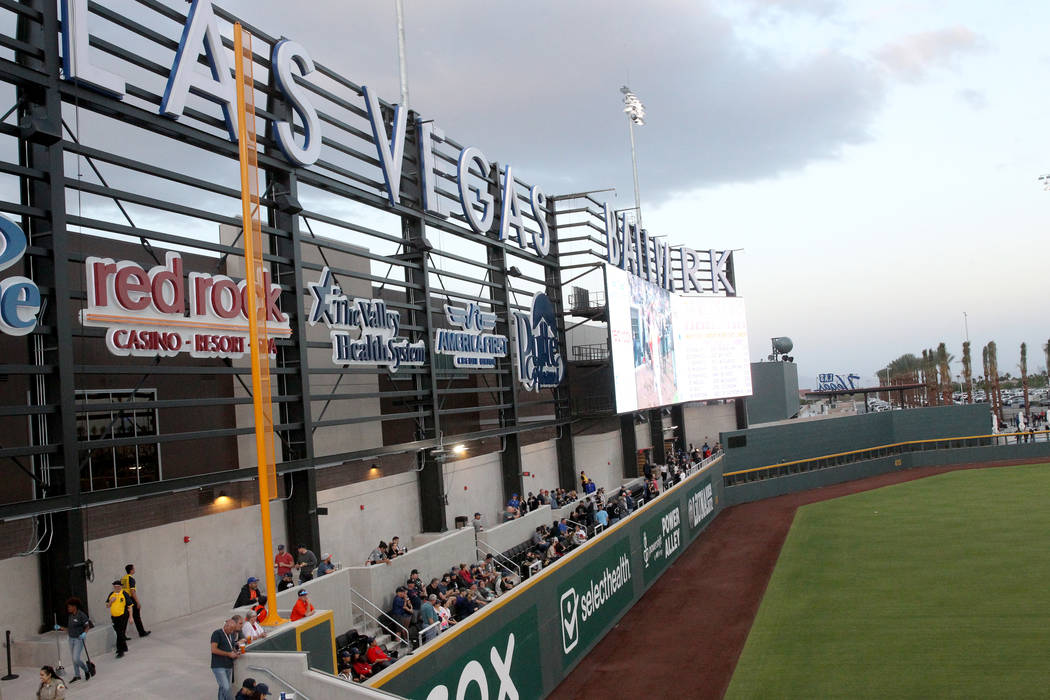 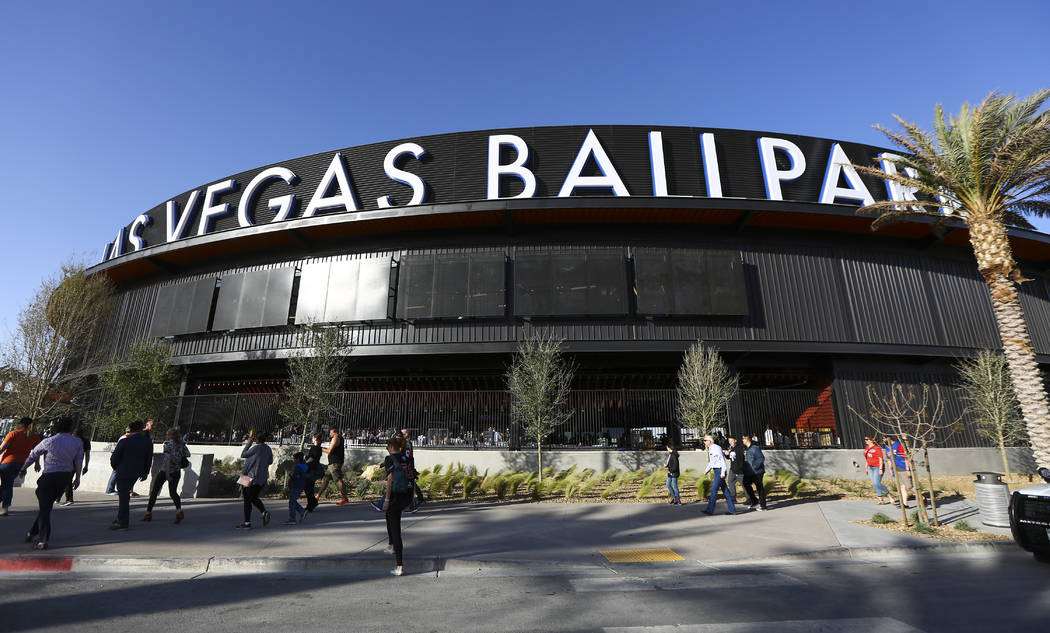 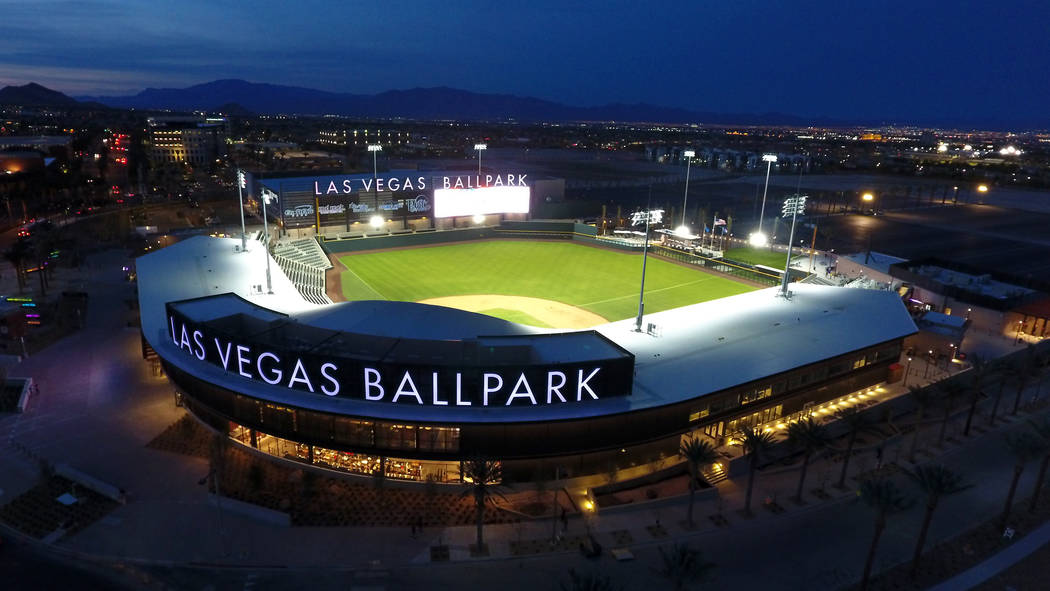 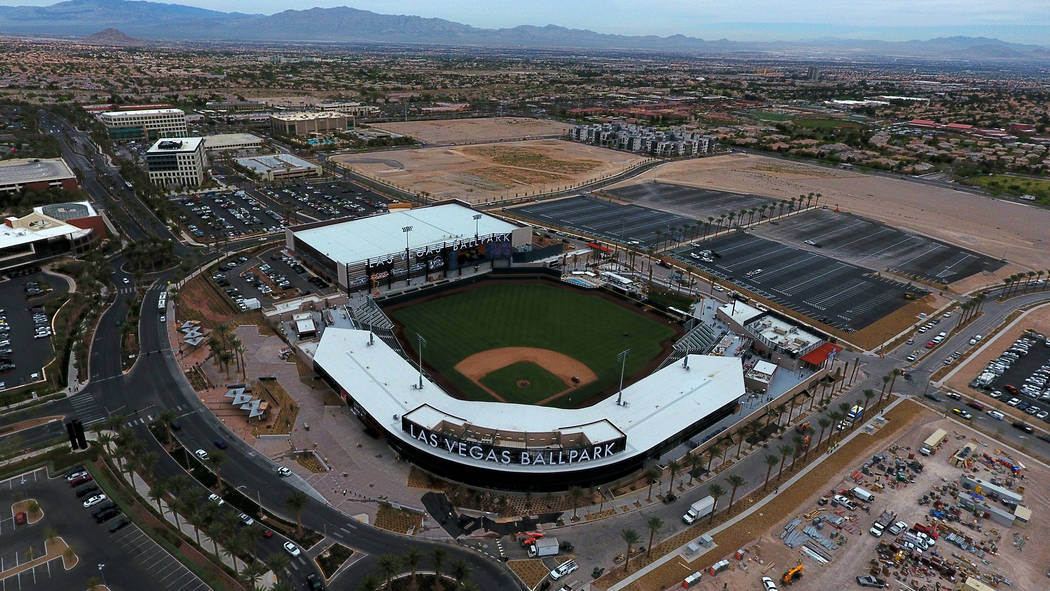 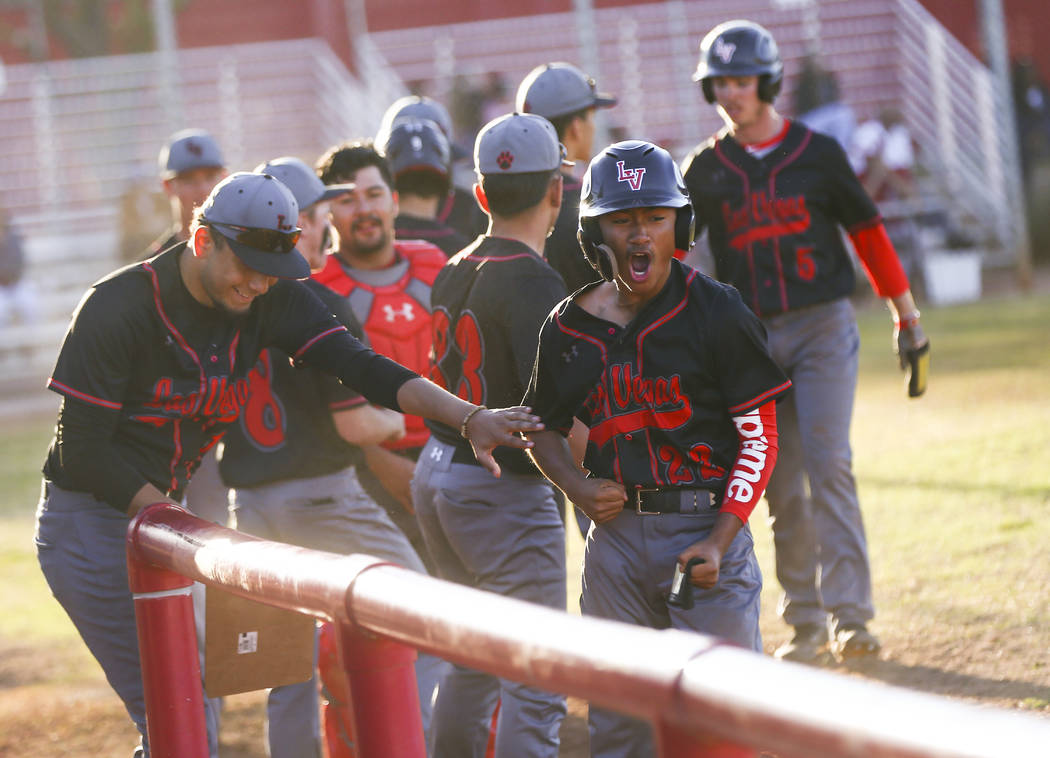 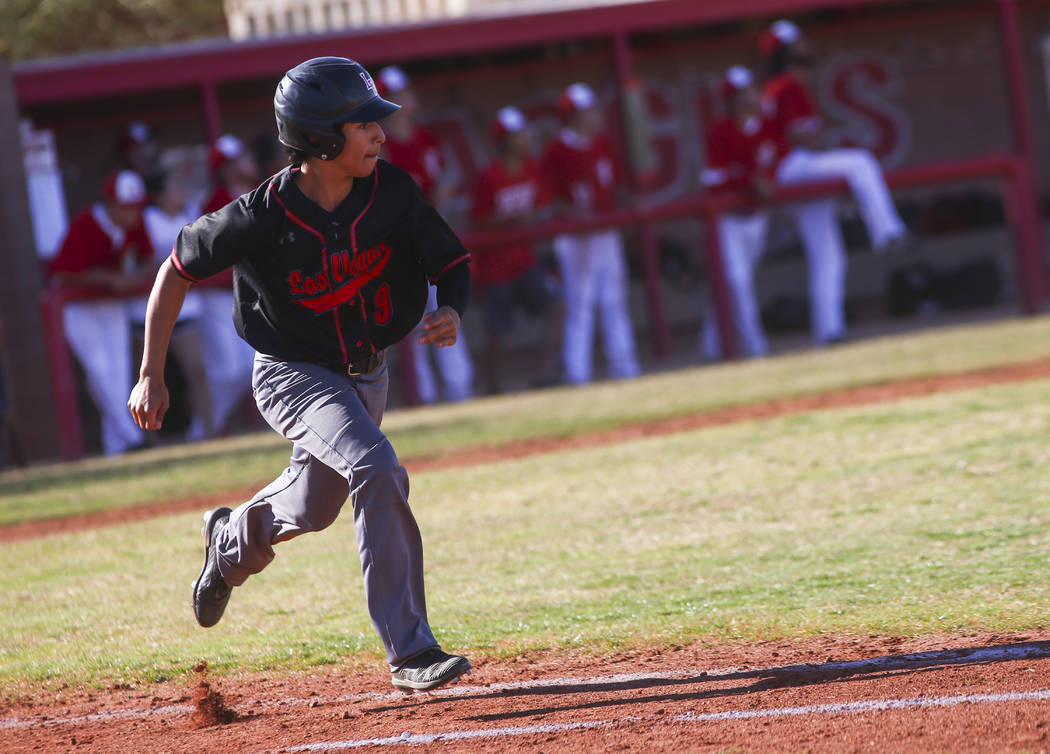 Las Vegas High’s baseball team has waited more than 40 years to return to a state tournament.

This year’s Wildcats believe they timed it perfectly.

Las Vegas is one of six schools with a chance to play in the new Las Vegas Ballpark during this week’s Nevada Interscholastic Activities Association Class 4A state tournament.

The tournament starts Wednesday at Bishop Gorman and Centennial. Thursday’s and Friday’s games will be played at the home of the Aviators. The championship is scheduled for 4 p.m. Friday.

“I think it’s fantastic,” said Las Vegas coach Sam Thomas. “The place is just beautiful. Back when I played, the state tournament was held at an elite facility like UNLV and then later (at College of Southern Nevada). More recently because of circumstances, it has been at high school fields.

“Any time the kids can get to play where the professionals play, it’s a big deal. It’s such a motivation for the kids.”

Thomas, who has been Las Vegas’ coach since 1999, would know. The Wildcats last competed at state in the 1970s, but he was a member of the 1983 Valley High team that played Western in an exhibition game to open Cashman Field.

“It’s a full-circle thing,” Thomas said. “I was fortunate enough to get that chance, and now I’m going to get to coach these kids in that setting.”

It’s only the second time the state tournament has been contested in a professional stadium. The 2010 tournament was held at what is now Greater Nevada Field in Reno.

“It will be a thrill to conduct our large-school championship in a first-class facility,” said NIAA assistant director Donnie Nelson. “I’m excited. The Aviators are going to roll out the red carpet for our student-athletes, teams, coaches, umpires and fans. We can’t thank them enough.”

Aviators president Don Logan reached out to high school coaches with the idea of playing games in the new park. Centennial and Palo Verde’s junior varsity teams played a game in the park on April 6.

“It’s Las Vegas Ballpark for a reason,” Logan said. “We want it to be for everyone in Southern Nevada. You want the kids to get out and play here.”

Nelson and Logan said the teams won’t just get to use the field. They’ll be treated similarly to the professionals who play there daily.

Aviators’ staff will handle the game operations. No temporary fencing will be brought in, so the players will deal with the same field dimensions Triple-A teams do.

“This is a playoff and we want it to be top-notch from a baseball perspective,” Logan said. “There will be a lot of little things that make them have a big-league experience. What these kids will see is the back of the house. It’ll be a thrill for them.”

All six teams are guaranteed at least one game in the stadium in the double-elimination tournament, which ends Friday.

Nelson said the NIAA wanted to keep the tournament to three days to cut down on travel costs for the Northern Nevada schools. A total of 10 or 11 games will be played in the tournament, with all but four contested in the stadium.

“That’s awesome. To organize it that way is just phenomenal,” Thomas said.