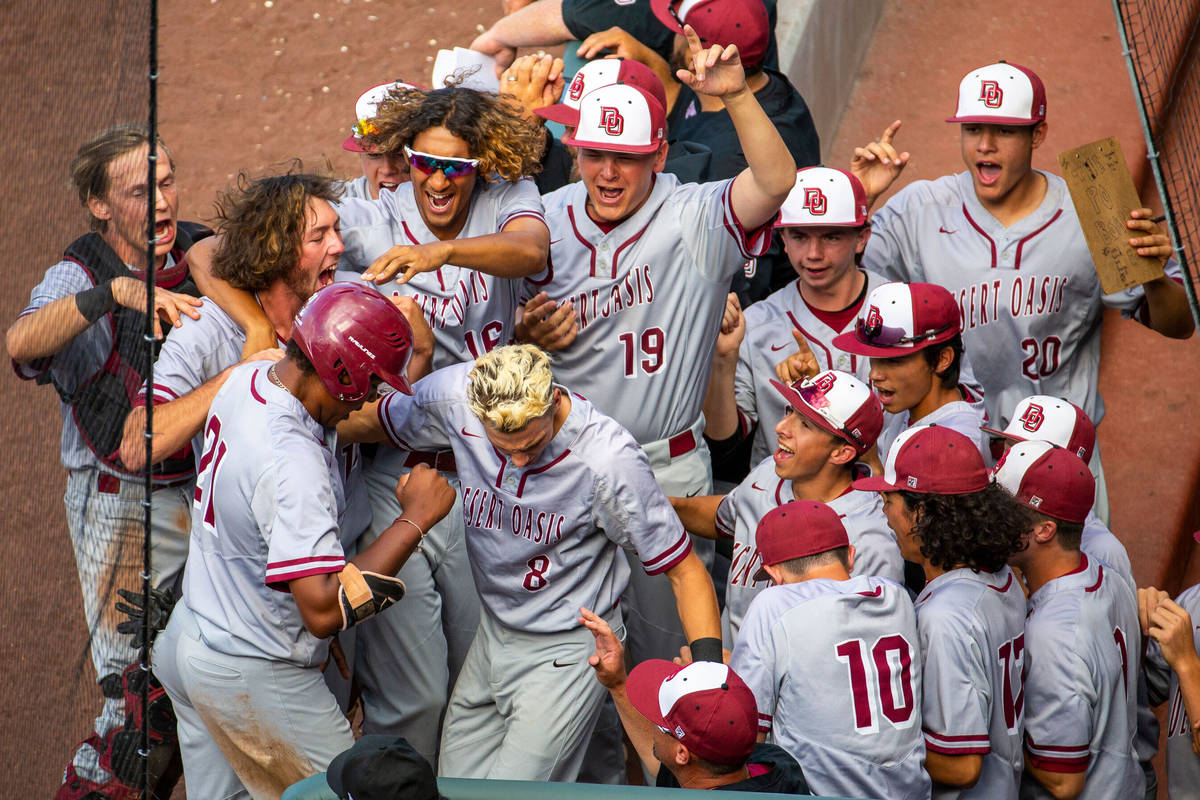 Desert Oasis teammates celebrate a run by Jacob Walsh (21) over Reno in the second inning during their Class 4A baseball state championship game at the Las Vegas Ballpark on Friday, May 17, 2019. (L.E. Baskow/Las Vegas Review-Journal) @Left_Eye_Images

De’jon Mitchell, Legacy: The junior was 2-for-3 with a double, triple, stolen base, two RBIs and two runs in a 13-2 win over Bonanza.

Colton Stanton, Legacy: The freshman was 3-for-3 with two doubles, a stolen base, three RBIs and two runs in a 13-2 win over Bonanza.

Irvin Weems, Durango: The senior was 1-for-2 with a home run, three RBIs, two runs and two stolen bases in a 15-0 win over Desert Pines.

Willow Bachiochi, Coronado: The junior was 3-for-4 with a double, an RBI and a run in an 8-5 win over Centennial.

Destiny Capers, Silverado: The junior was 4-for-5 with a double, stolen base, three RBIs and four runs in an 18-17 win over Legacy.

Mikayla Capers, Silverado: The senior was 4-for-4 with four doubles, four RBIs and two runs in an 18-17 win over Legacy.

Ashlyn Cowdell, Foothill: The junior was 3-for-3 with five RBIs, allowed no earned runs on two hits and struck out seven in an 11-5 win over Basic.

Allie Fox, Foothill: The senior was 3-for-5 with a double and four RBIs in an 11-5 win over Basic.

Jersie McDonald, Clark: The freshman was 2-for-3 with a double, a home run, four RBIs, a stolen base and a run in a 15-0 win over Desert Pines.

Madison Ruiz, Legacy: The junior was 5-for-5, hit for the cycle with a stolen base, five RBIs and five runs in an 18-17 loss to Silverado.

Keira Tibbetts, Silverado: The sophomore was 4-for-4 with a double, five RBIs and four runs in an 18-17 win over Legacy.

Kiana Turene, Spring Valley: The senior was 3-for-3 with two doubles, a home run, four RBIs and three runs in a 17-2 win over Cheyenne.

Ava Walker, Faith Lutheran: The freshman allowed no earned runs on four hits and struck out five in a complete-game 2-1 win over Palo Verde.