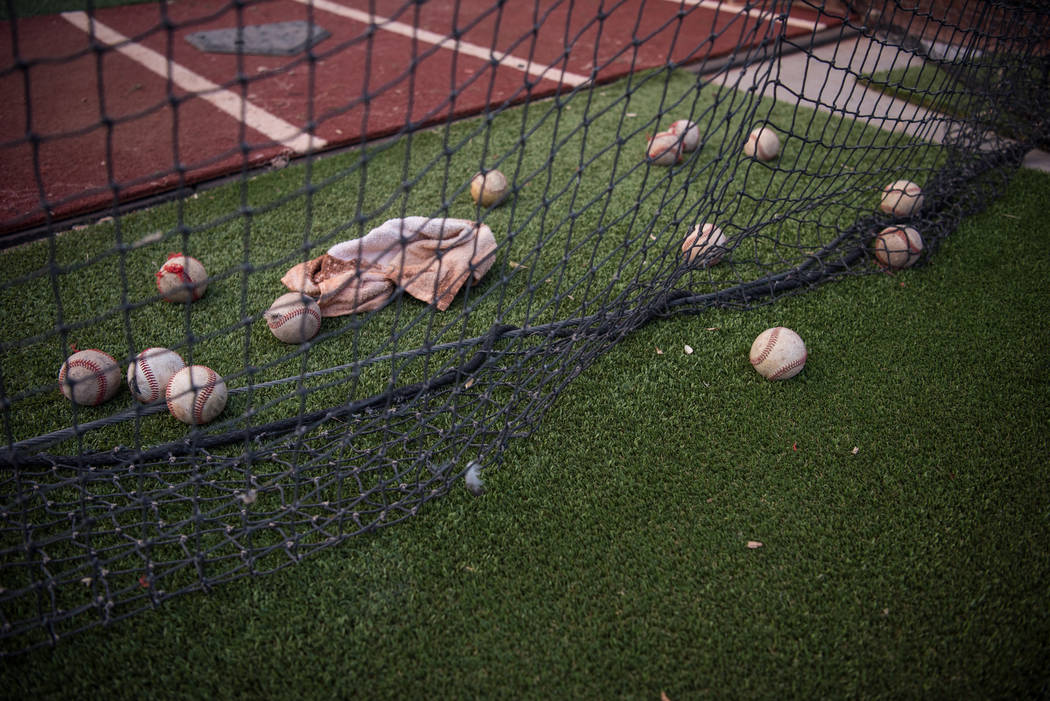 Basic and Desert Oasis each won Tuesday to remain undefeated in Desert League baseball play heading into their matchup Wednesday at Basic.

The Wolves scratched across a run in the top of the seventh inning to edge host Bishop Gorman, 7-6.

Basic 7, Bishop Gorman 6 — At Gorman, Hunter Katschke supplied a sacrifice fly that scored Dalton Miller with the go-ahead run in the seventh inning as the Wolves nipped the Gaels.

Miller finished 3-for-3 with a two-run home run, and teammate Zach Hose had two hits, two runs, and an RBI for Basic, which got the win in relief from Logan Spaur.

Tai Nguyen was 3-for-4 with a run, and Santino Panaro provided two hits, two runs and an RBI to lead Gorman.

Desert Oasis 10, Coronado 2 — At Desert Oasis, Parker Schmidt went 2-for-4 with a home run and two RBIs as the Diamondbacks downed the Cougars.

Logan Bleazard went 2-for-3 with a double for Coronado.

Peyton Cole went 3-for-4 with a home run, a triple, a double and two RBIs for Palo Verde. PaulShawn Pasqualotto was 1-for-3 with a homer and three RBIs for the Panthers.

Isaiah Salas was 2-for-3 with a homer and three RBIs for Shadow Ridge.

Durango 5, Sierra Vista 1 — At Sierra Vista, Adrian Oles went 2-for-3 with one run to help the Trailblazers defeat the Mountain Lions.

Ryan Barry was 1-for-3 with two RBIs for Durango.

Garrett Guy went 1-for-3 with a double and and RBI for Sierra Vista.

Faith Lutheran 7, Bonanza 0 — At Bonanza, Michael Rice and Vance Serrano combined on a two-hitter as the Crusaders blanked the Bengals.

Las Vegas 9, Eldorado 0 — At Eldorado, Nathan Freimuth tossed a two-hit shutout with eight strikeouts and went 2-for-3 with a home run, a double and three RBIs as the Wildcats blanked the Sundevils.

Centennial 11, Rancho 1 — At Centennial, Kris Bow was 3-for-4 with two doubles, a triple and an RBI to help the Bulldogs rout the Rams in six innings.

Trevor Wright went 2-for-4 with three RBIs for Centennial, which also got a home run from Rene Almarez.

Zachary Hare tossed a four-hitter and struck out nine for the Bulldogs.

Rancho’s Matthew Baughn was 1-for-2 with a double and an RBI.

Liberty 14, Green Valley 0 — At Liberty, Dawson Beard tossed a five-inning four-hitter and struck out nine as the Patriots blanked the Gators.

Winning pitcher Elie Kligman was 2-for-3 with three RBIs, and Will Zadrowski was 3-for-3 with a double for Cimarron.

Isaiah Buhecker was 2-for-3 for Legacy.

Omar Becerra had a double for Desert Pines.

Cheyenne 12, Canyon Springs 11 — At Canyon Springs, winning pitcher Joseph Barile went 2-for-4 with a double and two RBIs to help the Desert Shields edge the Pioneers.

Christopher Rose was 2-for-3 with a double for Cheyenne.

Pahrump Valley 13, Mojave 1 — At Mojave, Willie Lucas went 3-for-3 with a double, four RBIs and two runs, and Chase McDaniel was 4-for-4 with a double, two RBIs and three runs as the Trojans pounded the Rattlers in five innings.

Tyler Floyd was 3-for-3 with two RBIs and a run, and Roman Roberts added two hits, two RBIs and two runs for Pahrump Valley, which led 12-1 after three innings.

Jeraun Irby went 2-for-2 with a double and scored the only run for Mojave.

Del Sol 13, Western 1 — At Western, Gelkis Digurnay went 2-for-4 with a double, two RBIs and two runsm and Logan Morgan hit a home run to help power the Dragons past the Warriors in six innings.

Stockton Maxwell was 4-for-5 with a double for Pahranagat Valley.

Bryan White went 3-for-3 with a double, and Alan Underwood was 3-for-4 with an RBI for Lake Mead.

GV Christian 2-16, Spring Mountain 12-3 — At Mountain Ridge Park, winning pitcher Logan Hall went 2-for-3 with three runs and two RBIs in the nightcap to help the Guardians earn a split of two five-inning games with the Golden Eagles.

Vincent Bush and Randal Moss each went 2-for-3 in the second game for GV Christian.

Moss was 2-for-2 with an RBI in the opener for the Guardians.

Indian Springs 19, Laughlin 14 — At Laughlin, the Thunderbirds outlasted the Cougars.