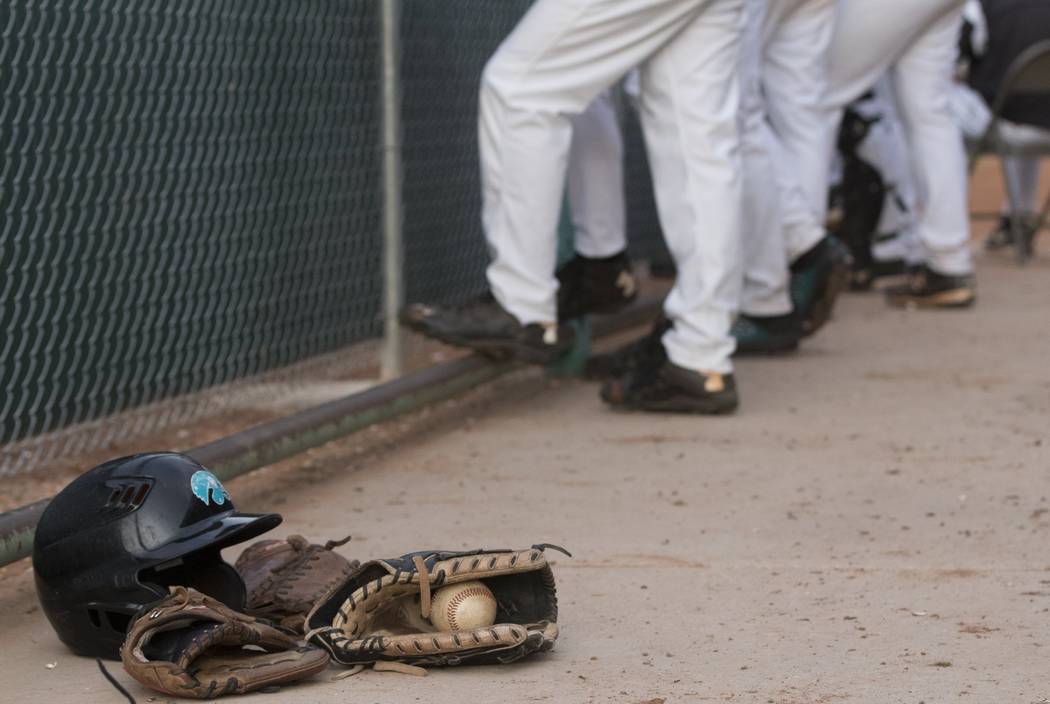 Cortez struck out 15 with no walks.

Liberty 10, Arbor View 9 — At Liberty, Mason Bowden hit an infield single that brought in Chase Gallegos with the winning run in the bottom of the seventh to lift the Patriots over the Aggies.

James Katona doubled to lead off the inning and scored the tying run on Jack Hale’s sacrifice fly.

Katona went 2-for-2 with two doubles, and Logan Coons was 3-for-3 with one RBI for Liberty.

Bowden was 2-for-4 with one RBI for the Patriots.

Garrett Cutting went 4-for-4 with a double and two RBIs for Arbor View.

Bonanza 3, Green Valley 2 — At Green Valley, Matthew Cox scored on a balk in the top of the sixth to break a 2-2 tie and the Bengals beat the Gators.

Yankiel Gonzalez went 2-for-4 with an RBI, and Ryan Webster was 2-for-3 for Bonanza. Makai DeSoto added a triple, a run and an RBI for the Bengals.

Rmeo Rodriguez allowed one hit in three scoreless innings of relief to get the win. He struck out five with two walks.

Josh George was 2-for-4 with a run for Green Valley.

Spring Valley 6, Shadow Ridge 5 — At Spring Valley, Braxton Bruschke scored on Cesar Perez’s single in the bottom of the seventh to give the Grizzlies the win over the Mustangs.

Shadow Ridge scored three runs in the top of the seventh to take a 5-2 lead, but the Mustangs failed to record an out in the bottom of the inning.

Chase Rodriguez had a three-run home run to tie the game at 5.

Bruschke was 2-for-4 with a double and two runs. Bruschke also allowed two unearned runs on five hits in 5⅓ innings. He struck out six and walked two.

Centennial 6, Coronado 3 — At Centennial, the Bulldogs took advantage of a pair of errors to score three runs in the bottom of the sixth to beat the Cougars.

Travis Rice started the sixth with a single and scored the go-ahead run on an error. Another error plated two runs for the final margin.

Anthony Martinez was 2-for-4 with a run, and Jamie Powell went 2-for-3 for Centennial. Kris Bow and Weston Ewing combined on a two-hitter for the Bulldogs.

Ewing threw 2⅓ scoreless innings of relief with two strikeouts to get the win.

Rancho 10, Sierra Vista 0 — At Rancho, Andrew Baughn threw a three-hitter as the Rams beat the Mountain Lions in six innings.

Baughn struck out six with no walks.

Sierra Vista’s Garrett Guy was 2-for-2 with a double.

Chaparral 10, Valley 0 — At Chaparral, Bryan Gonzalo threw a four-hitter as the Cowboys defeated the Vikings in five innings.

Gonzalo struck out eight with one walk.

Rodney Elosequi was 2-for-3 with a triple, two runs and two RBIs to lead Chaparral’s offense. Abel Pasillas went 2-for-2 with two RBIs, and Brandon Rodriguez and Gonzalo each drove in two runs for the Cowboys.

Gustavo Donate went 2-for-2 for Valley.

Moapa Valley 10, Mojave 0 — At Overton, Hunter Wrzesinski went 4-for-4 with two doubles and three runs as the Pirates blanked the Rattlers in six innings.

Rylan Evans hit a triple, and Chase Hadley and winning pitcher Luke Bennett each supplied a double for Moapa Valley, which ended the game with four runs in the bottom of the sixth.

Kevin Gutierrez had a double for Mojave.

Sunrise Mountain 19, Democracy Prep 3 — At Sunrise Mountain, Brian Ruiz was 3-for-3 with a double, a triple and two RBIs as the Miners defeated the Blue Knights three innings.

Isaiah Gomez and Sebastian Leon each went 3-for-3 for Sunrise Mountain. Gomez had one RBI, and Leon drove in two runs.

Ramon Green went 2-for-2 with an RBI for Democracy Prep.

Boulder City 10, Western 0 — At Boulder City, Matthew Felsenfeld was 3-for-4 with a run as the Eagles earned the five-inning win over the Warriors.

Scott Bahde, Brendan Thorpe and Joey Giunta each drove in two runs for Boulder City, which scored eight runs in the bottom of the fifth to end the game via the mercy rule.

Troy Connell struck out six in three hitless innings to get the win.

Hamilton (Ariz.) 10, Basic 4 — At Tempe, Arizona, Tyler Wilson was 3-for-4 with a homer, three RBIs and two runs to lead the Huskies over the Wolves in the Boras Classic.

Basic’s Kyle Turner was 2-for-4 with an RBI, and Dalton Miller went 2-for-2 for the Wolves.

Mesquite (Ariz.) 11, Bishop Gorman 0 — At Tempe, Arizona, T.J. Clarkson tossed a five-inning three-hitter as the Wildcats blanked the Gaels in the Boras Classic.

Jacob Henderson was 2-for-3 with a game-ending three-run home run and four RBIs for Mesquite, which took advantage of nine walks and three hit batsmen.

Jacob Boardman was 1-for-2 for Gorman.