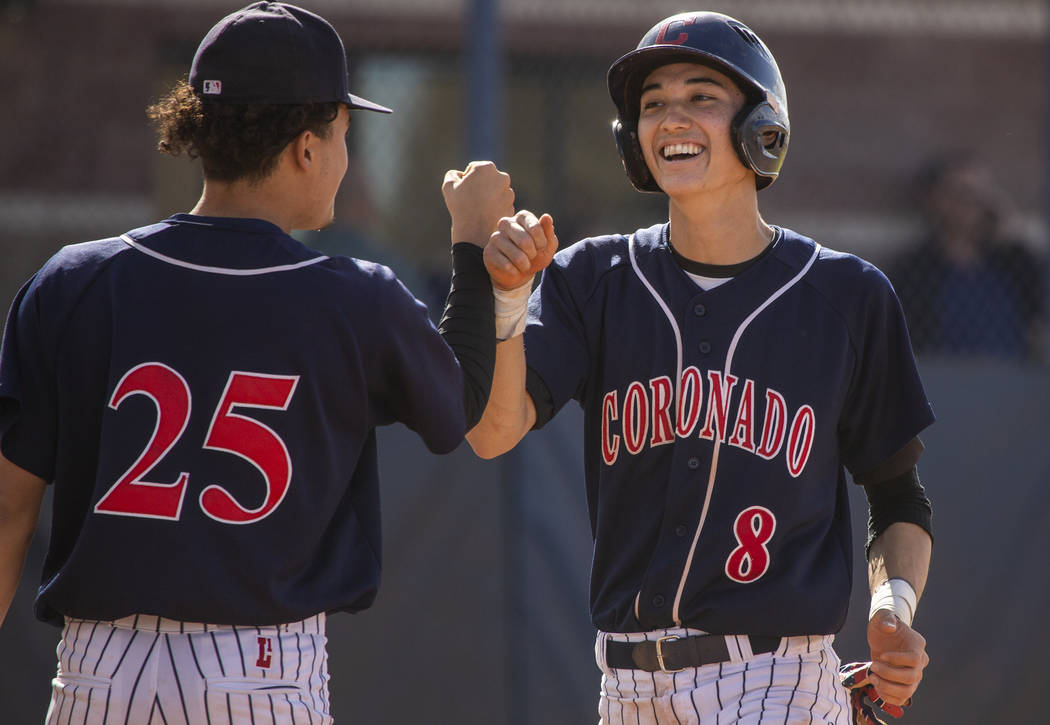 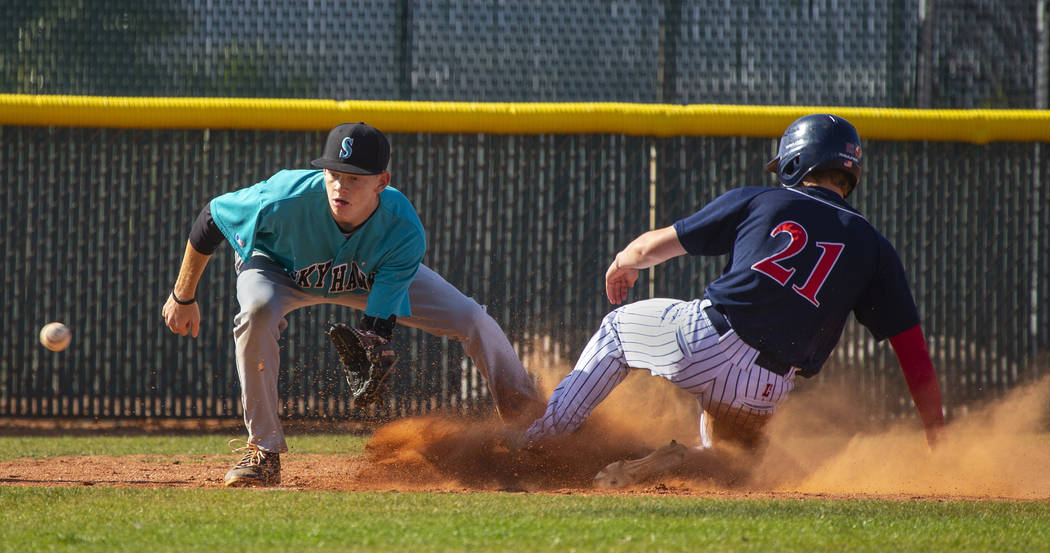 Silverado infielder Austin Whittaker (25) is unable to get the ball in time as Coronado runner Michael Stella (21) slides safely into third base during their baseball game on Tuesday, April 2, 2019. (L.E. Baskow/Las Vegas Review-Journal) 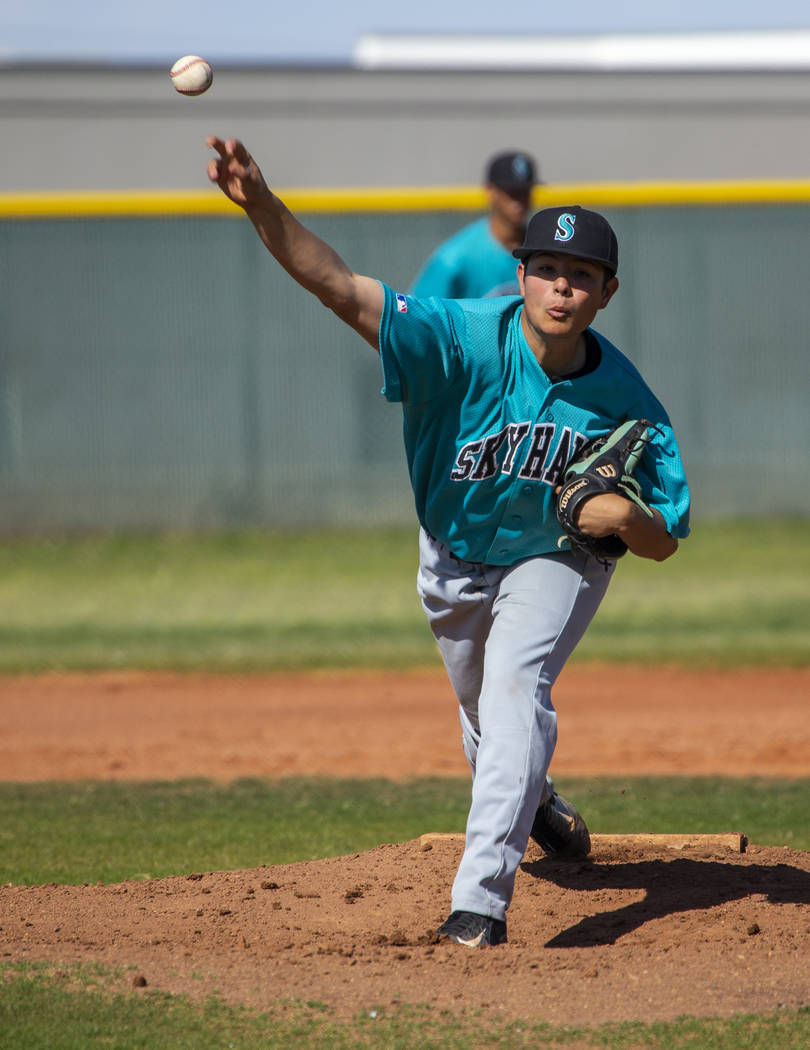 Silverado pitcher Angel Garcia (4) tosses a ball towards the plate versus Coronado during their baseball game on Tuesday, April 2, 2019. (L.E. Baskow/Las Vegas Review-Journal) 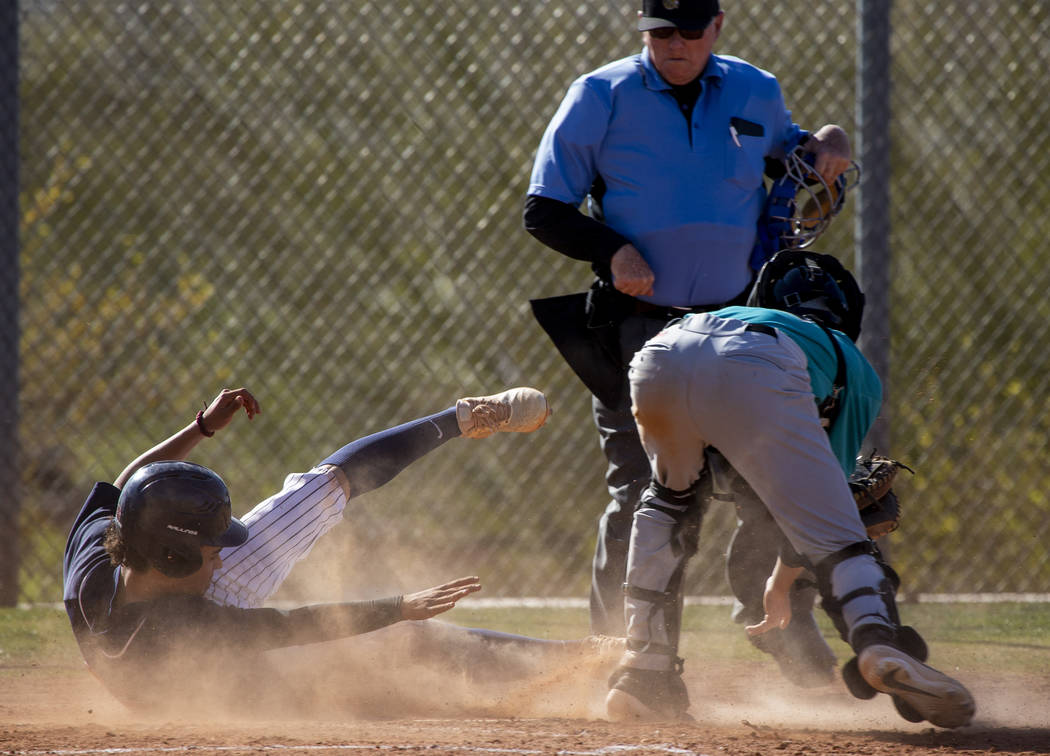 Coronado’s Thomas Planellas (25) slides but is tagged out at home base by Silverado catcher Seton Cifelli (21) during their baseball game on Tuesday, April 2, 2019. (L.E. Baskow/Las Vegas Review-Journal) 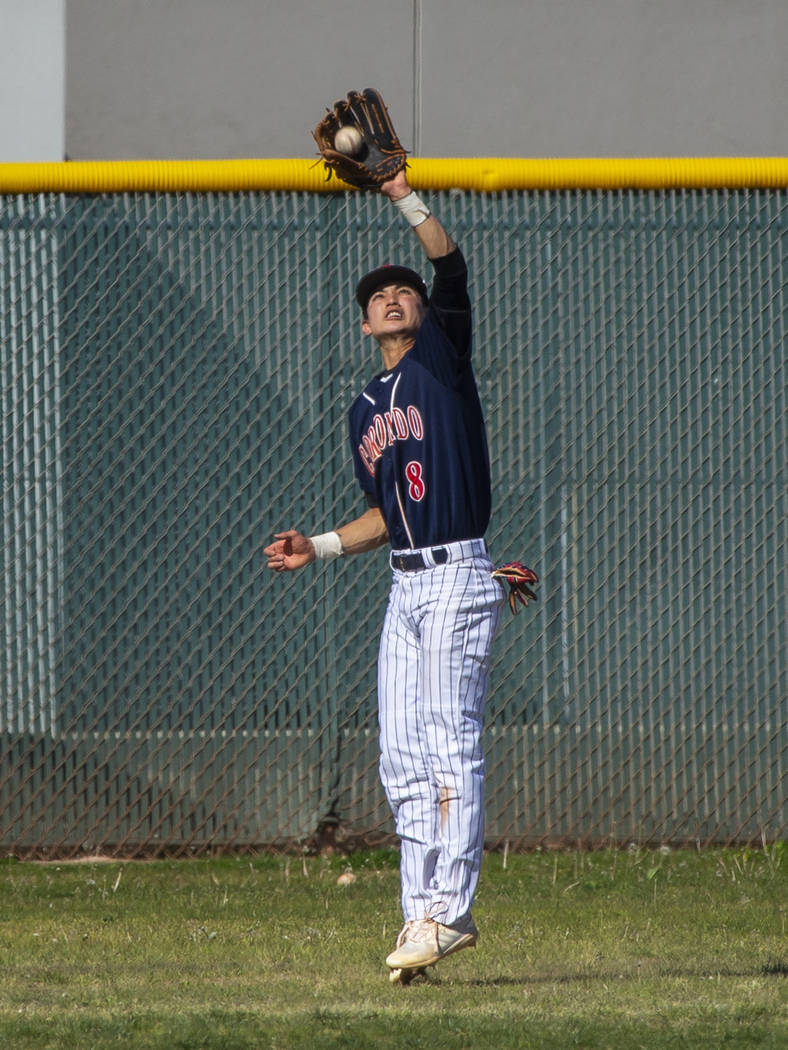 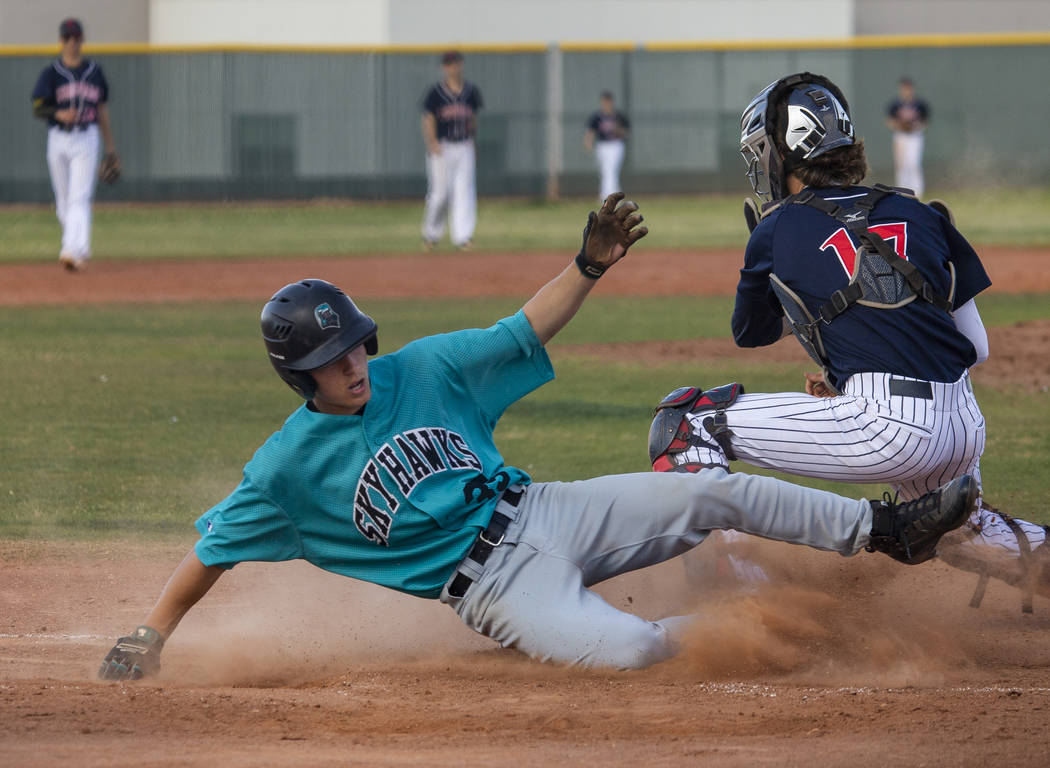 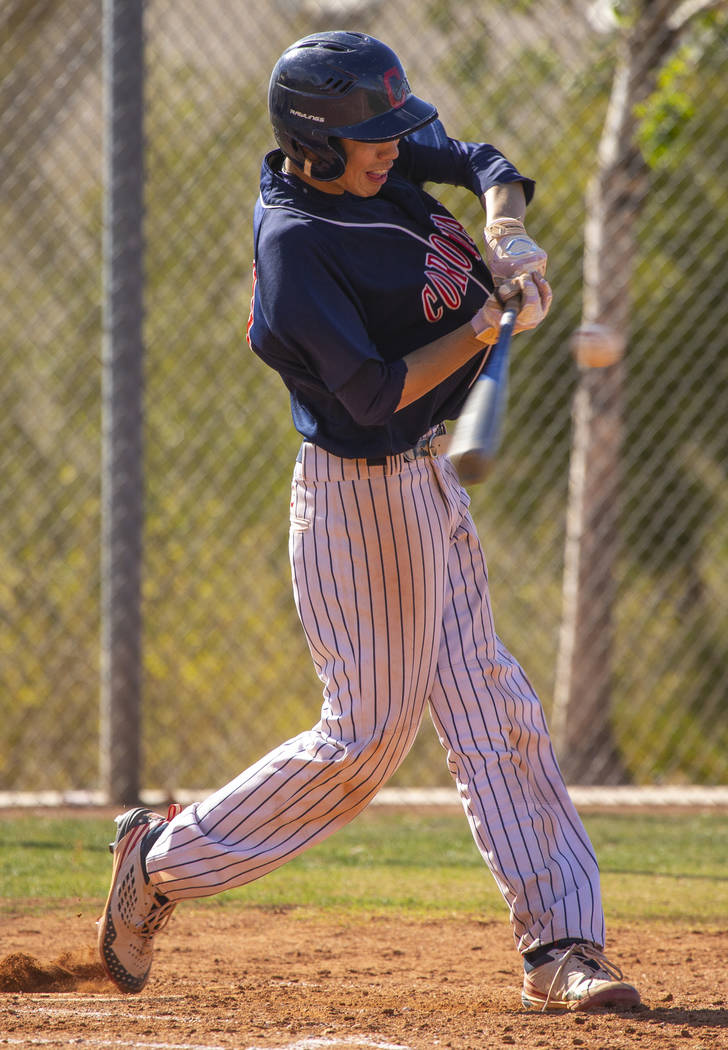 Coronado batter Jarrett Kenyon (29) readies to connect with a pitch versus Silverado during their baseball game on Tuesday, April 2, 2019. (L.E. Baskow/Las Vegas Review-Journal) 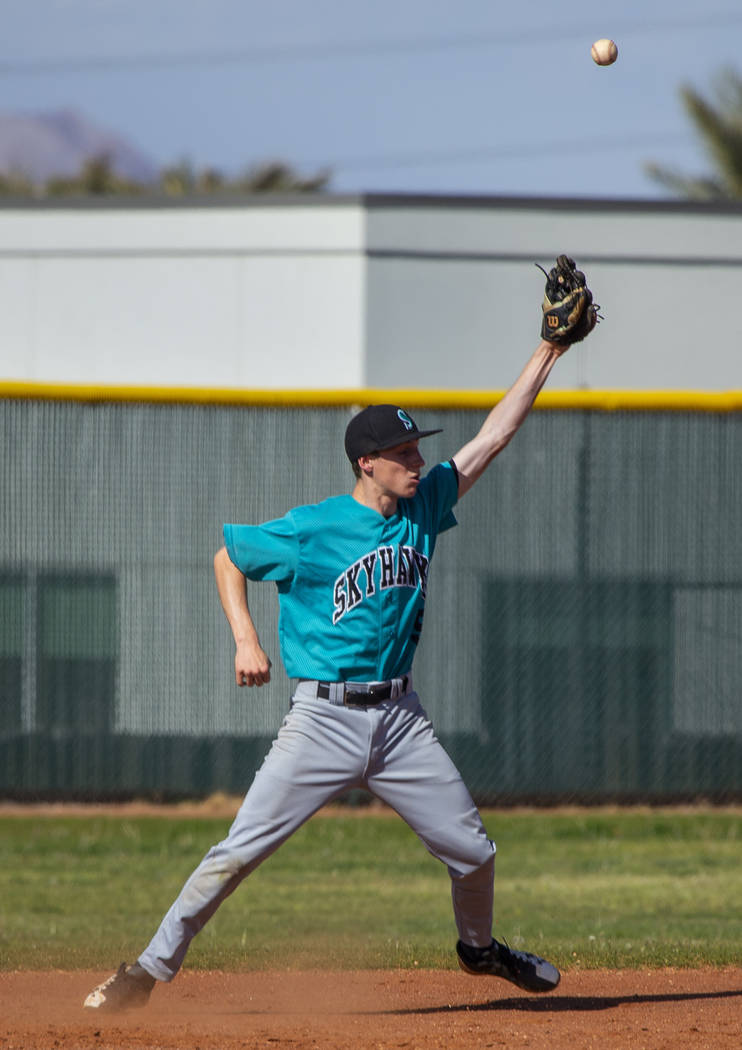 Silverado infielder Andrew Maxwell (5) is not able to handle a tough hop from a Coronado batter during their baseball game on Tuesday, April 2, 2019. (L.E. Baskow/Las Vegas Review-Journal) 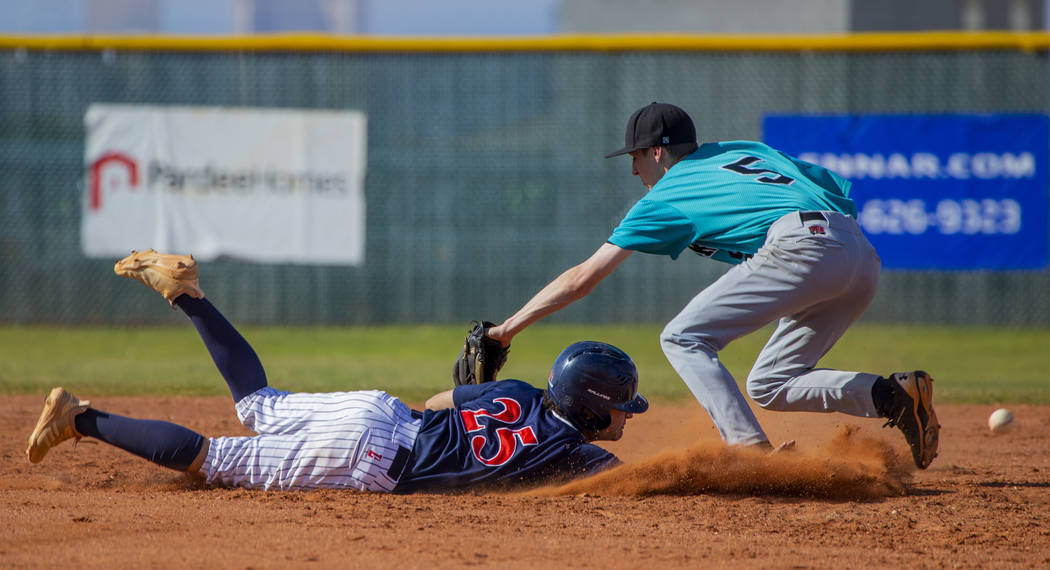 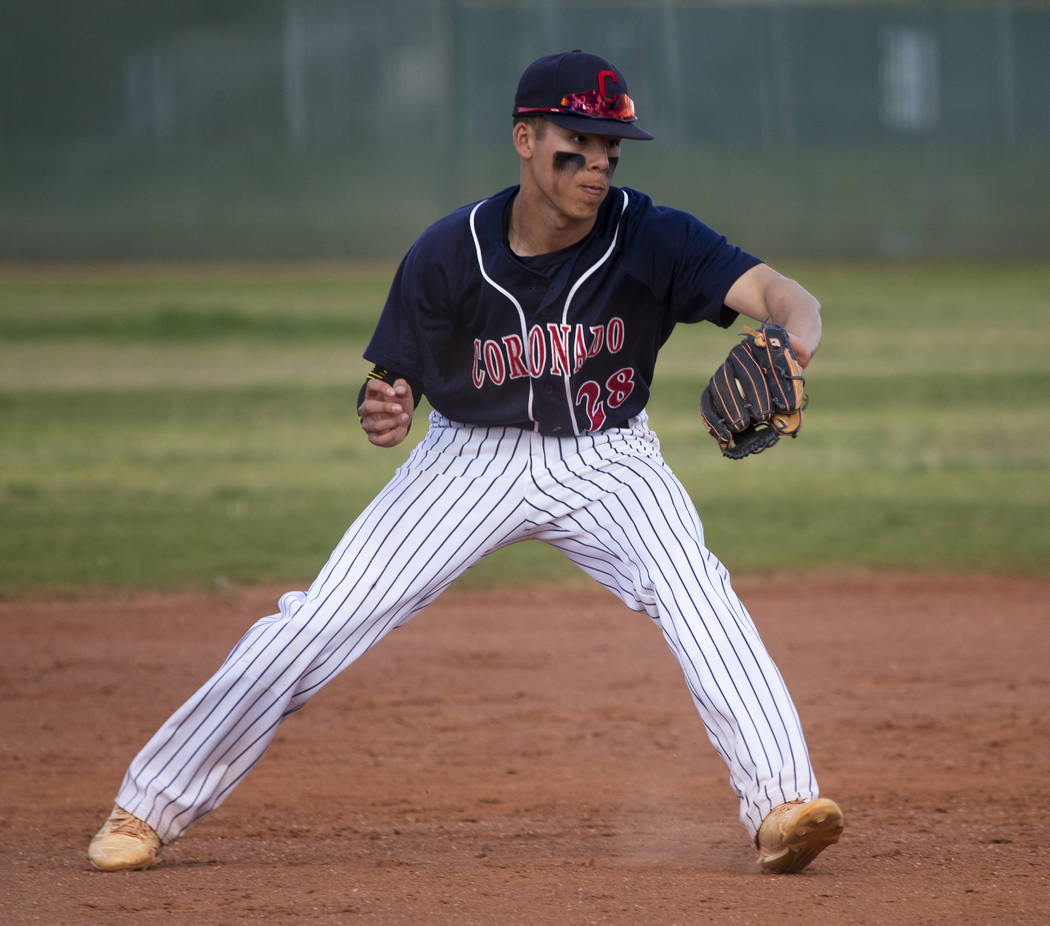 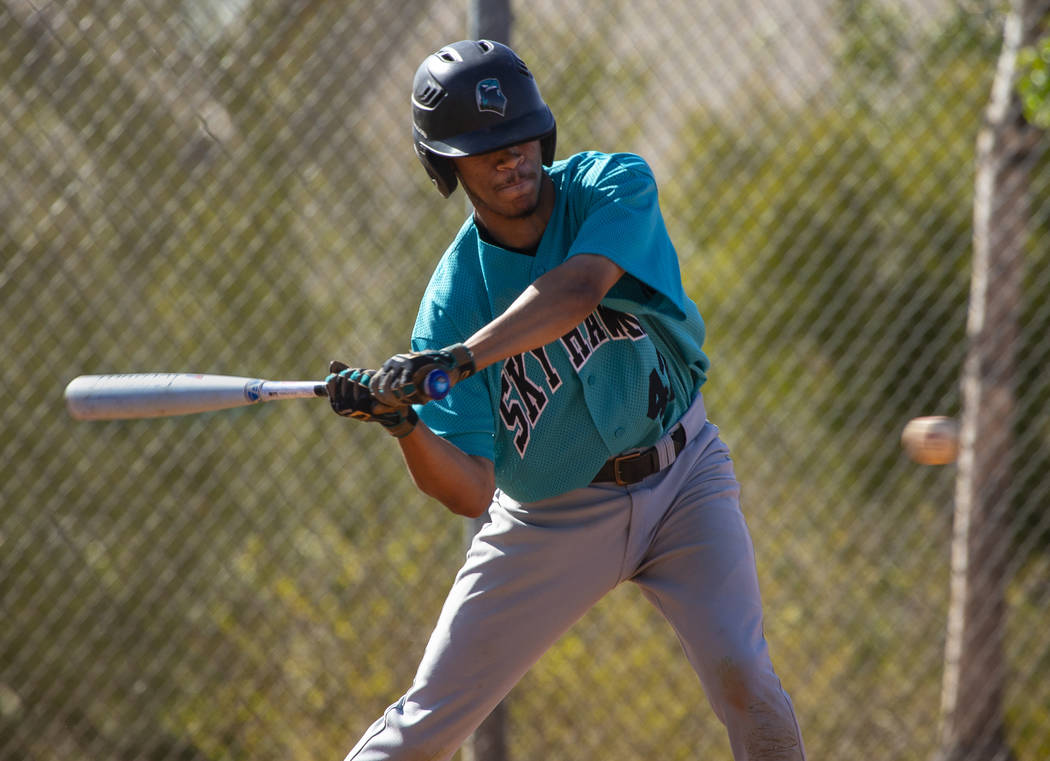 Silverado infielder Caleb Hubbard (42) eyes a pitch over the plate from Coronado during their baseball game on Tuesday, April 2, 2019. (L.E. Baskow/Las Vegas Review-Journal) 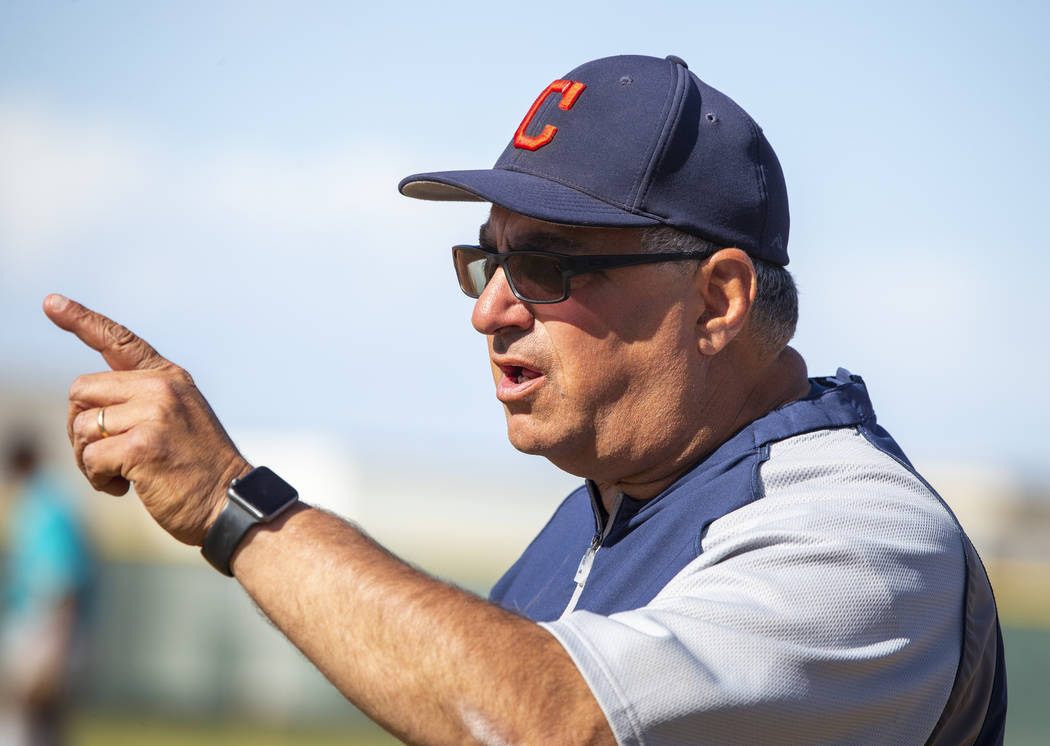 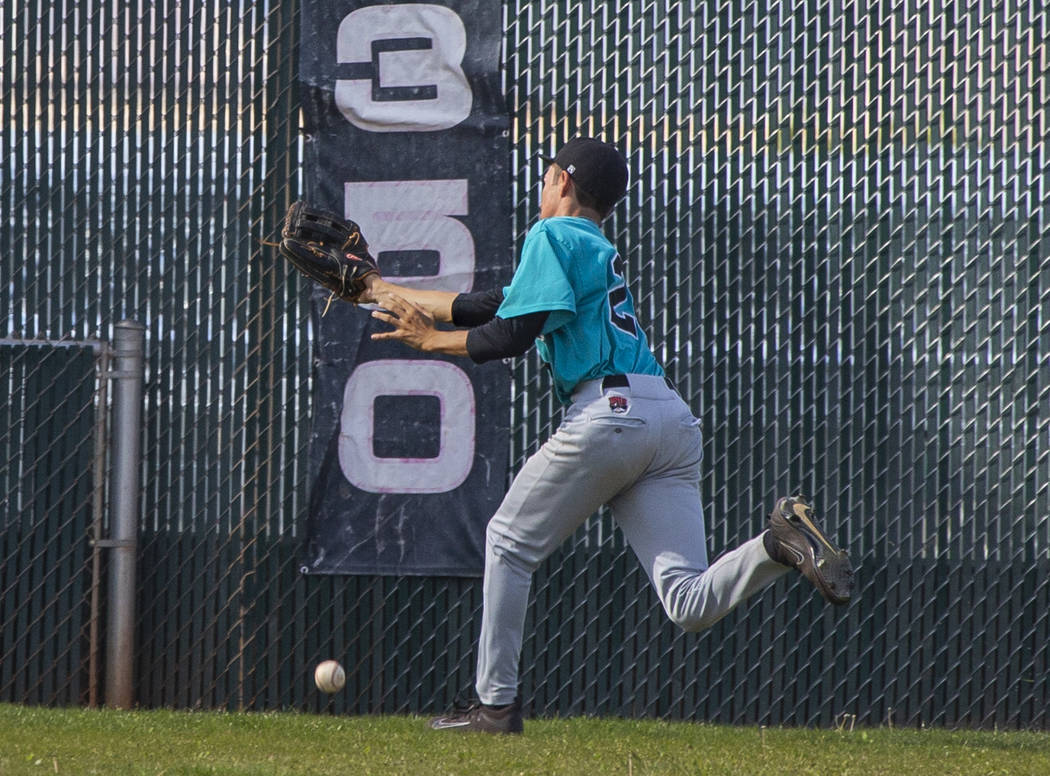 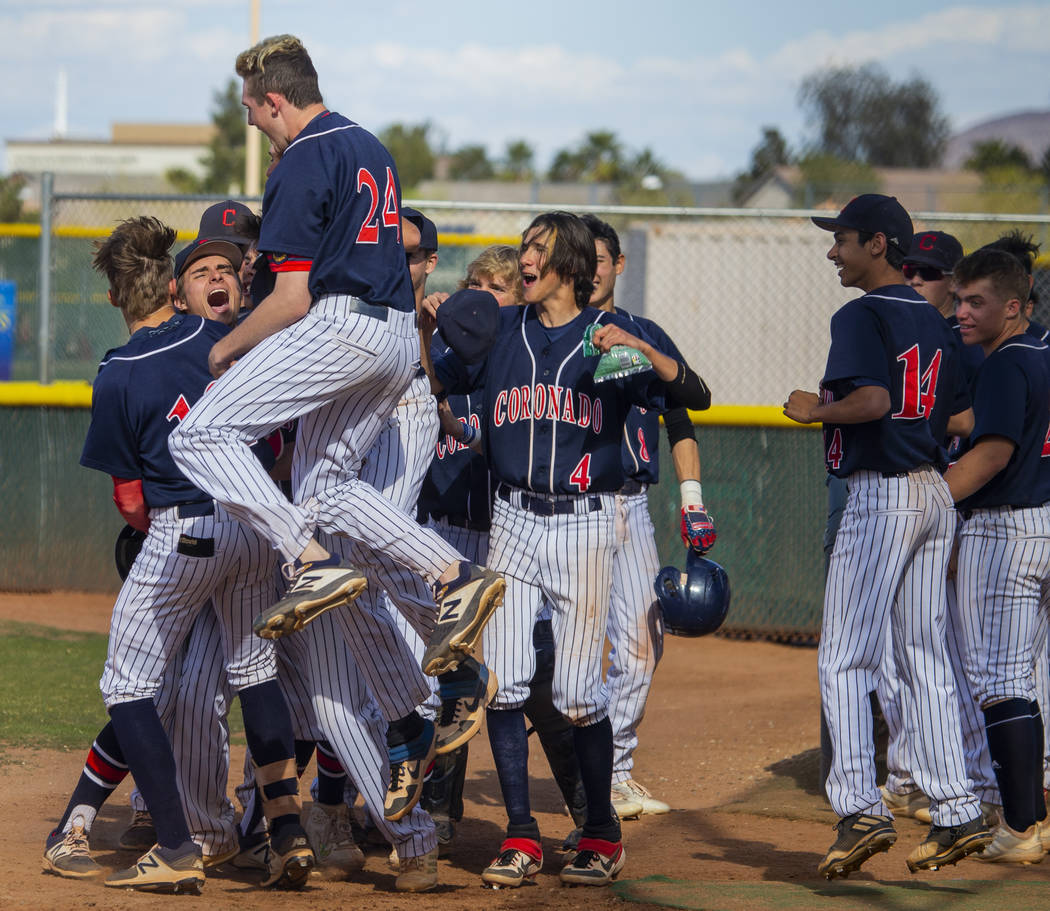 Jett Kenyon went 2-for-2 with a two-run homer, and teammates Josh Johnson and Max Fernandez each added two hits for Coronado, which scored eight runs in the fourth inning and moved into third place in the Desert League at 5-1, one game behind co-leaders Basic and Desert Oasis.

Jarrett Kenyon earned the win, yielding only two earned runs for the Cougars.

Jarod Hill had an RBI triple, Caleb Hubbard had an RBI single, and Seton Cifelli tripled to lead Silverado, which fell to 4-1 in league play.

Bonanza 4, Clark 3 — At Bonanza, Ryan Webster’s bases-loaded single to left with one out in the bottom of the seventh inning plated Orbien Hernandez-Silva with the winning run as the Bengals rallied to walk off winners over the Chargers.

Clark took a 3-2 lead in the top of the seventh, but Bonanza took advantage of an error and a fielder’s choice that didn’t result in an out to put runners on the corners to start the bottom of the seventh.

Julian DeLeon followed with a single that moved Hernandez-Silva to third. Makai DeSoto was hit by a pitch to load the bases for Webster, who finished 3-for-4 with two RBIs.

Spring Valley 5, Sierra Vista 4 — At Spring Valley, Ryan Steinhauer was hit with a pitch with the bases loaded and no outs in the bottom of the seventh inning to force in Jonathan Vasquez with the winning run as the Grizzlies edged the Mountain Lions.

Michael Marraro led off the bottom of the seventh by drawing a walk. Vasquez ran for Marraro and moved to third on Braxton Bruschke’s double. A walk to Cesar Perez loaded the bases for Steinhauer.

Champ Tenorio was 3-for-3 with two RBIs, and Alex Chavira was 2-for-4 with a solo home run for Sierra Vista.

Moapa Valley 7, Virgin Valley 1 — At Mesquite, Luke Bennett tossed a no-hitter, striking out five and walking four, to lead the Pirates by the Bulldogs.

Bishop Gorman 10, Durango 0 — At Gorman, John Gaughan was 2-for-3 with a home run, a double, two runs and five RBIs to lead the Gaels to a five-inning win over the Trailblazers.

Gavin Mez was 2-for-3 with an RBI, and Carson Wells went 1-for-3 with a double and two RBIs for Gorman.

Will Martin and Andrew Taormina combined on a three-hitter for the Gaels.

Liberty 17, Foothill 7 — At Liberty, freshman Logan Meusy went 3-for-4 with two triples, a double, and five RBIs, and Josh Rogers was 3-for-3 with a double and three RBIs as the Patriots outslugged the Falcons in five innings.

Kaeden Camat-Toki and Zanden Shim each went 3-for-4 with a triple and two RBIs, and Dylan San Nicolas doubled twice for Liberty, which rallied from a 5-2 deficit with eight runs in the bottom of the third.

Kelton Lachelt went 2-for-3 with two doubles and four RBIs, and Jake Perales went 2-for-2 with a double for Foothill.

Chaparral 13, Western 3 — At Chaparral, Denis Perez went 3-for-4 with a triple, a double, three runs and two RBIs to help the Cowboys to a six-inning win over the Warriors.

Christopher Acosta-Lopez was 3-for-5 with three RBIs, and Brandon Rodriguez was 1-for-3 with three runs for Chaparral.

Gonzalo Lopez and Omar Zarate each went 1-for-3 with an RBI for Western.

Green Valley 13, Shadow Ridge 3 — At Shadow Ridge, Garrett Nelson was 3-for-4 with two runs and an RBI to help the Gators to a five-inning win over the Mustangs.

Gavin Malcolm was 1-for-2 with a home run and three RBIs, and Matthew Galdi was 2-for-3 with a double and an RBI for Green Valley.

Josh George went 1-for-3 with a double and three RBIs, and Scott Gruber was 1-for-2 with three RBIs for the Gators.

Tyler Black was 1-for-3 with a solo home run for Shadow Ridge.

Cimarron-Memorial 13, Desert Pines 0 — At Cimarron, Jackson Folkman went 3-for-3 with two triples and five RBIs to help the Spartans to a five-inning win over the Jaguars in the completion of a game that was suspended March 20 due to rain.

Elie Kligman was 2-for-3 with a double and two RBIs and struck out six in two innings of relief for Cimarron.

Lawrence Campa was 2-for-3 with two RBIs, and Jamal Royster went 2-for-3 for the Spartans.

Logan Spaur was 2-for-2 with a double, three runs and an RBI, and Dominik Tavares was 1-for-3 with a home run and three RBIs for Basic.

Trace Evans and Kyle Turner each went 2-for-3 with an RBI for Basic.

Jason Collingbourne was 2-for-3 with a double and two runs for Tech.

Boulder City 17, Sunrise Mountain 0 — At Boulder City, Jimmy Dunagan was 1-for-2 with a grand slam and six RBIs to help the Eagles to a three-inning rout of the Miners.

Blaze Trumble went 2-for-2 with a home run, a double and four RBIs for Boulder City, which took advantage of nine walks and two hit batsmen.

Brian Ruiz was 1-for-2 with a double for Sunrise Mountain.