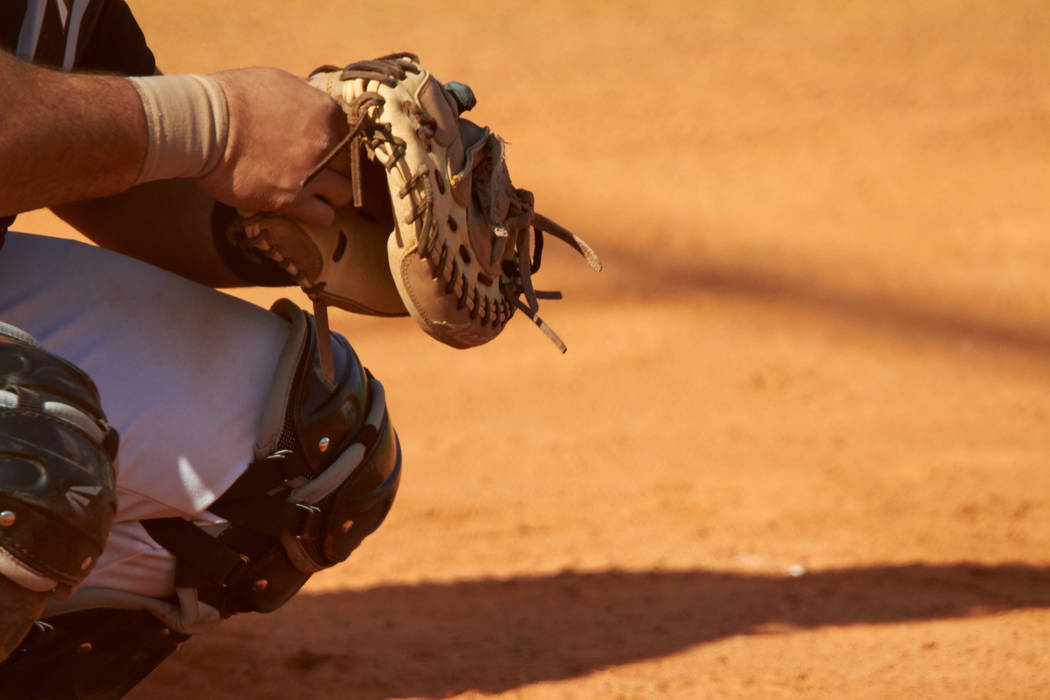 Desert Oasis baseball coach Paul Buboltz saw his team work out of several long-odds jams in the regular season, but he had not seen anything quite like the predicament his Diamondbacks faced in the seventh inning on Wednesday.

On two occasions in the final frame, Buboltz’s squad was down to its last strike.

But the Diamondbacks somehow survived and rallied for five runs to beat Liberty, 7-6 in the winners’ bracket final of the of the Class 4A Desert Region tournament at Desert Oasis.

Parker Schmidt was the final Diamondbacks’ hero, as he drew a two-out, bases-loaded walk to force in the winning run and secure a berth in the Class 4A state tournament.

The Patriots (22-9-1) will face either Bishop Gorman or Basic in an elimination game at 4 p.m. Thursday at Desert Oasis, with the winner to play the Diamondbacks (29-6) at 1 p.m. on Friday.

Though Buboltz remained stoic after the game, he did make one confession.

The decisive inning started with an error by the Patriots, and featured three hits and four walks. Jordan Demarce faced an 0-2 count with two outs before loading the bases with a line single to left field, bringing up Schmidt, who also overcame an 0-2 count to draw the game-winning walk.

The rally would not have been necessary had Diamondbacks starter Campbell Holt not had a rough second inning. Though he was dominant throughout most of his six innings on the mound, he gave up four runs in a second inning that opened with Liberty’s Logan Coons bouncing a single up the middle. The Patriots followed with three more hits, and Kaeden Camat-Toki’s bloop single into left field made it 4-1.

Holt settled down from there, retiring the Patriots in order over each of the next four innings.

Even so, Liberty had all the momentum heading into the seventh and made the most of it by jumping on reliever Tyler Montoya for two key hits and expanding the lead to 6-2.

Buboltz said he knew it wasn’t over.

“These guys never give up,” he said. “They always believe they have a shot. It’s pretty unbelievable what they just did.”

Aaron Roberts was 2-for-3 with two RBIs for Desert Oasis.

Camat-Toki went 2-for-4 with two RBIs for Liberty.

Bishop Gorman 4, Spring Valley 0 — At Gorman, Trevor Meisner tossed a one-hitter and struck out seven to lead the Gaels by the Grizzlies.

Basic 7, Silverado 2 — At Basic, Kai Symonds tossed a seven-hitter as the Wolves eliminated the Skyhawks.

Zach Hose belted a two-run home run as part of a four-run first inning for Basic, which got a solo homer in the third from Hunter Katschke. Kyle Turner added two hits, two RBIs and a run for the Wolves.

Caleb Hubbard was 2-for-4 with a solo homer, and teammate Austin Whittaker also homered for Silverado (15-15).

Brad Stone went 2-for-3 with four RBIs and a run to help Arbor View clinch a state tournament berth and a spot in the Mountain Region final with an 8-1 road win over Las Vegas High.

Dominic Clayton was 1-for-3 with two RBIs, and Nick Cornman was 2-for-2 with a double for the Aggies (24-9) who advance to the region final at 4 p.m. Friday at Centennial.

Daniel Jimenez went 2-for-3, and Joel Lindahl singled home the only run for Las Vegas (24-8), which will face either Palo Verde or Rancho in the losers’ bracket final at 7 p.m. Thursday at Centennial.

Palo Verde 3, Centennial 2 — At Palo Verde, Josiah Cromwick’s solo home run with two outs in the bottom of the sixth inning broke a 2-2 tie and lifted the Panthers by the Bulldogs in an elimination game.

Centennial scored twice in the top of the sixth to take a 2-1 lead.

Winning pitcher Peyton Cole had an RBI single in the bottom of the sixth to tie the game, but was thrown out trying to stretch the single into a double. Cromwick followed with the tie-breaking homer for Palo Verde (24-9), which will face Rancho (16-12-1) in an elimination game at 4 p.m. Thursday at Centennial.

Rancho 9, Cimarron-Memorial 7 — At Rancho, Raymond Minero was 2-for-4 with a double and two RBIs to help the Rams hold off the Spartans in an elimination game.

Donovan Gladney and Adrian Gomez each went 2-for-3 with a double and an RBI for Rancho.

Luke Bennett went 2-for-3 with a triple and three RBIs to help host Moapa Valley to an 11-0, five-inning win over Del Sol in a Class 3A Southern Region winners’ bracket final.

Hadley tossed a four-hitter and struck out four.

Boulder City 7, Pahrump Valley 3 — At Pahrump, Blaze Trumble capped a four-run ninth inning with a three-run home run to lift the Eagles by the Trojans.

Deavin Lopez reached on an error to start the rally and scored on a single by Jimmy Dunagan. Trumble followed by ripping an 0-2 pitch over the center field fence.

Lopez was 3-for-4 with two RBIs, and Scott Bahde and Joey Giunta each went 2-for-3 for Boulder City.

Chaparral 16, Valley 3 — At Chaparral, Christopher Acosta-Lopez’s grand slam with two outs in the fifth inning triggered the mercy rule as the Cowboys eliminated the Vikings.

Brandon Rodriguez was 2-for-3 with two RBIs for Chaparral.

Virgin Valley 5, Mojave 3 — At Mojave, Daxon Toone was 3-for-4 with a double and scored twice to lift the Bulldogs by the Rattlers in an elimination game.

Booker Wakefield was 1-for-4 with a double and three RBIs for Virgin Valley.