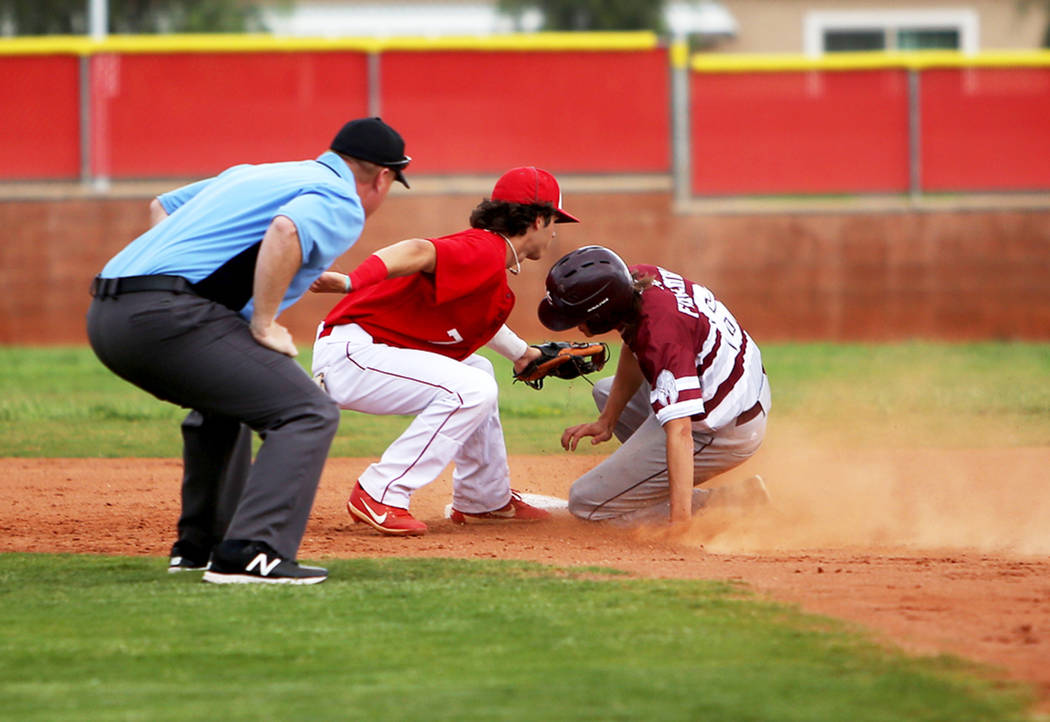 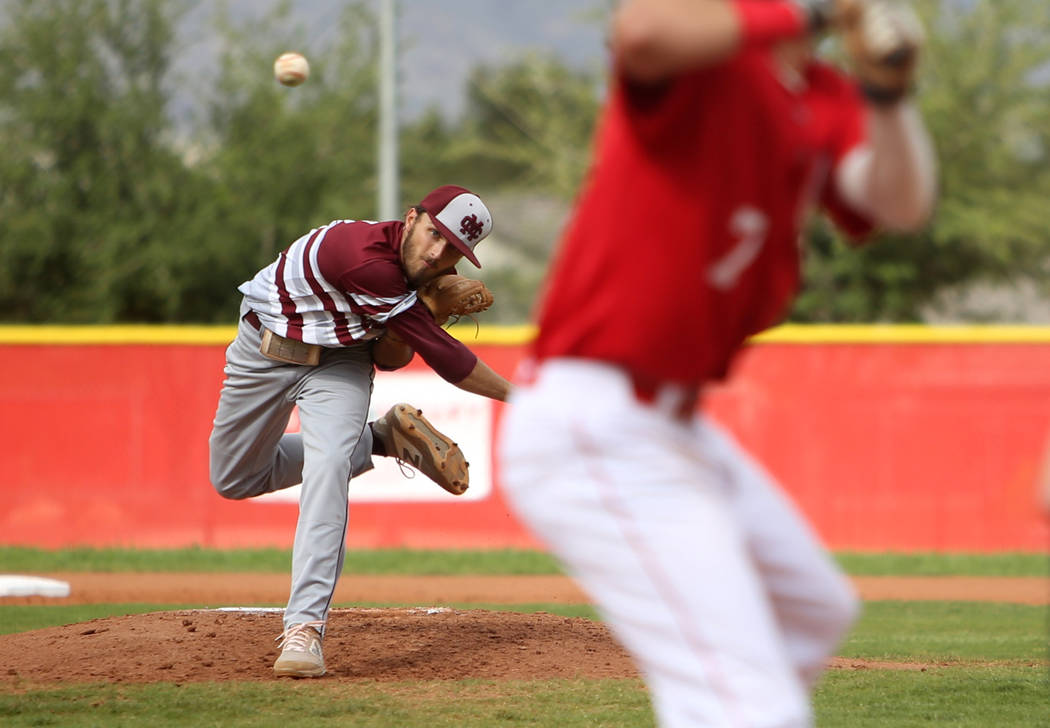 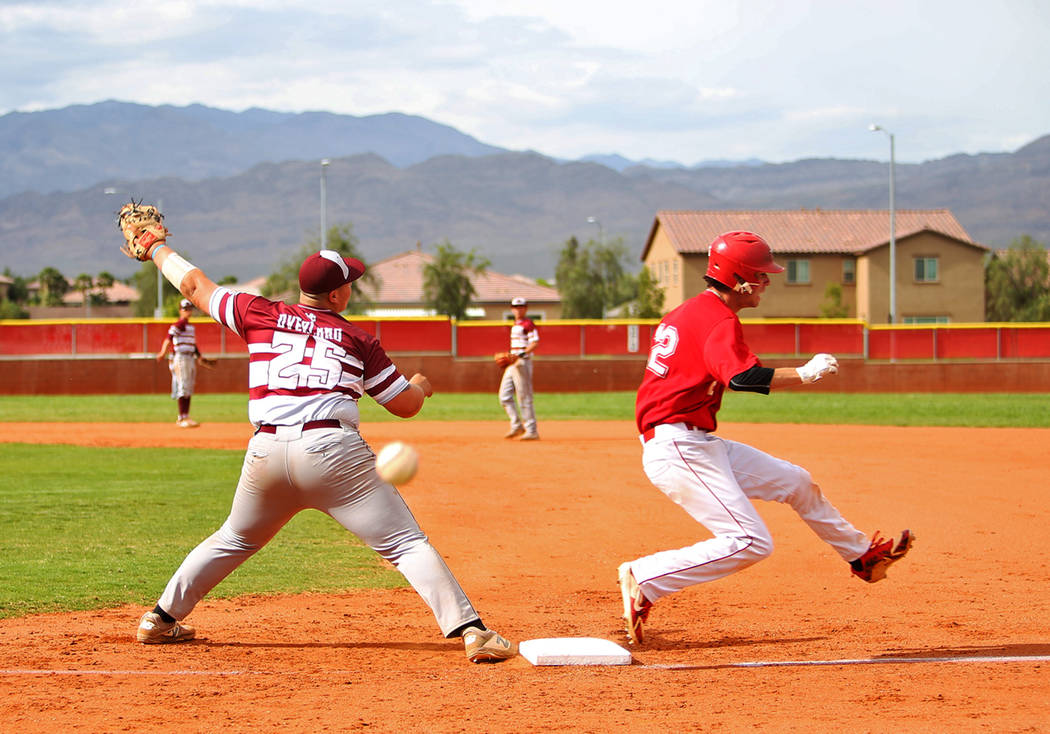 Arbor View’s (12) makes it safe to first as Cimarron-Memorial’s Mike Overland (25) tries to catch the ball in the second round playoff game in the Mountain Region tournament at Arbor View High School in Las Vegas, Tuesday, May 7, 2019. (Rachel Aston/Las Vegas Review-Journal) @rookie__rae 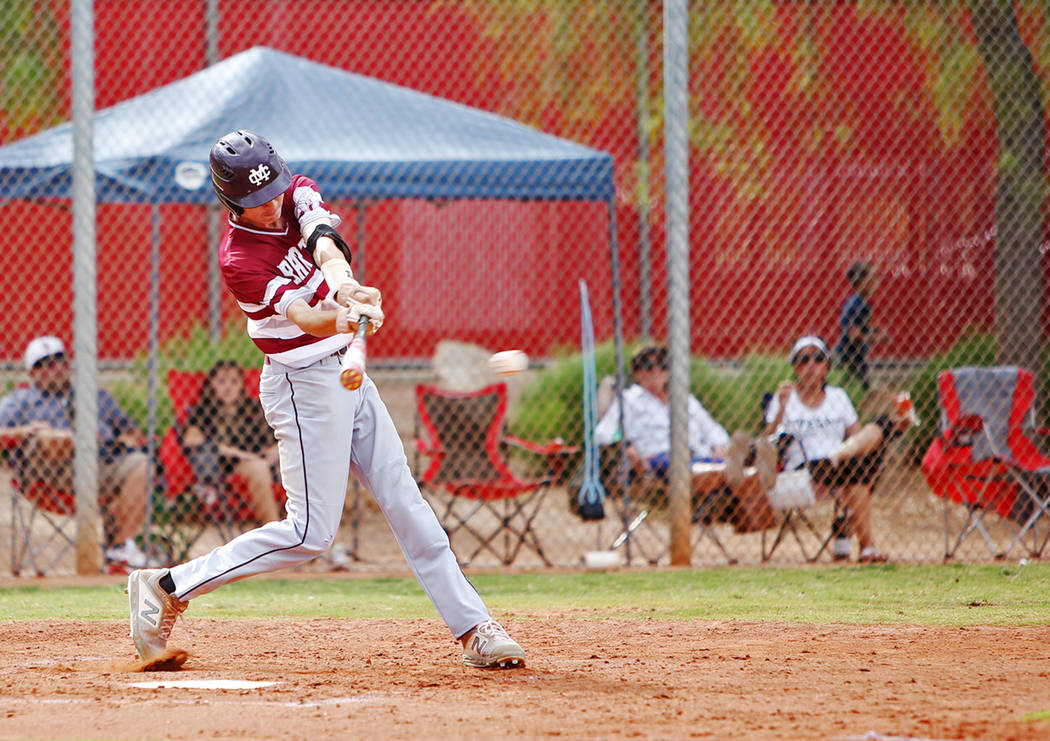 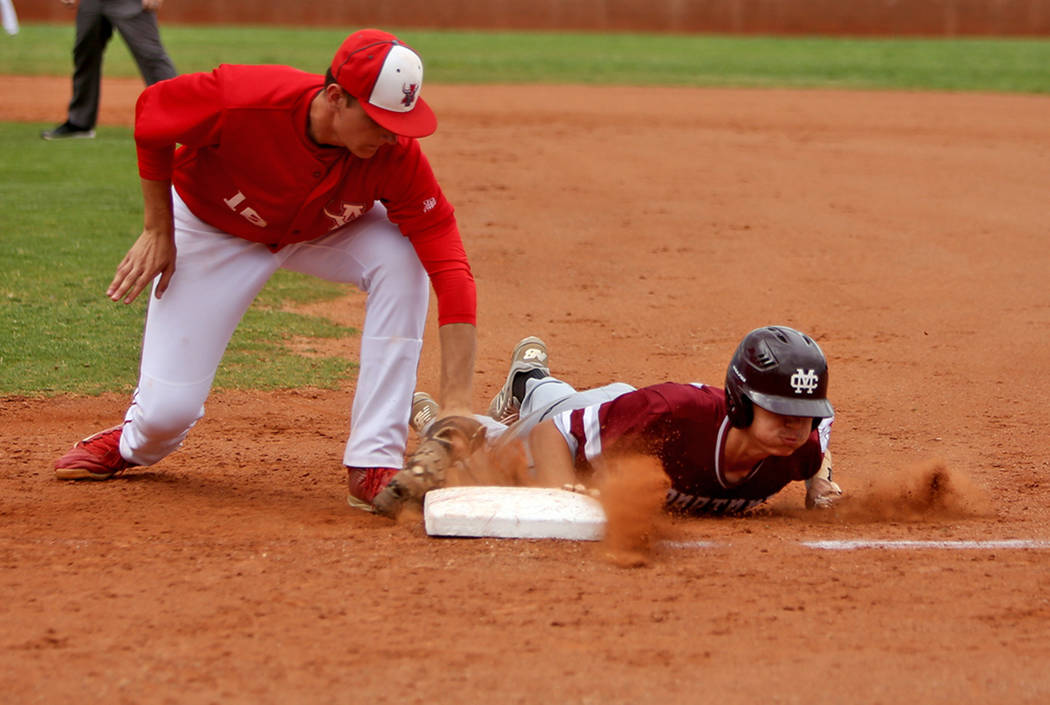 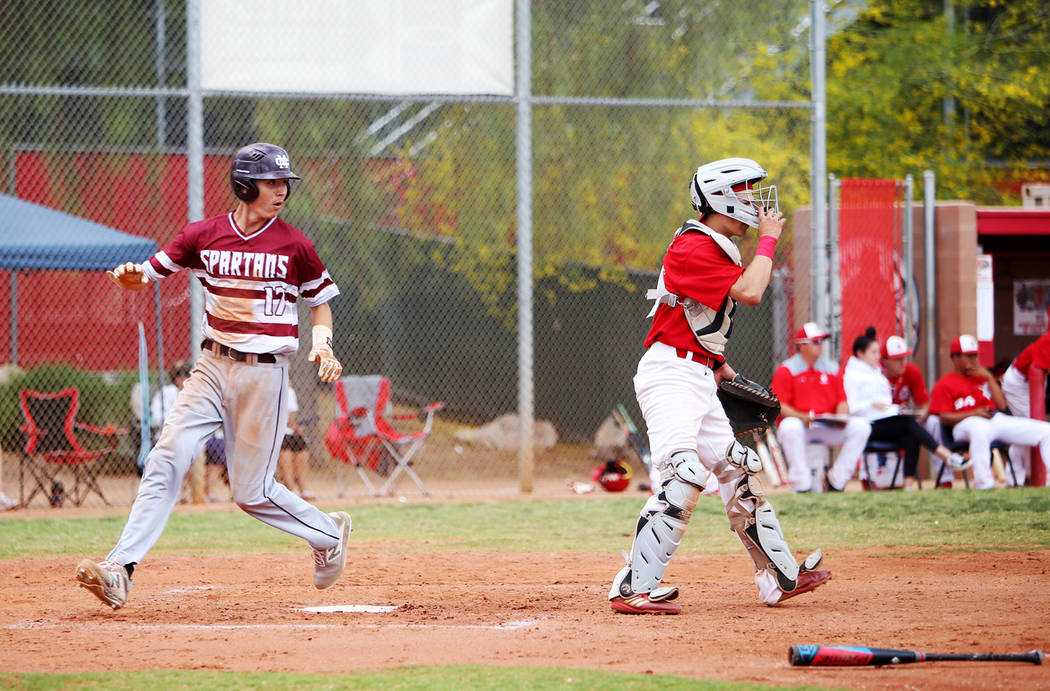 Nick Cornman wasn’t happy with his effort in Arbor View’s victory Monday in the opening round of the Mountain Region baseball tournament.

The San Diego Christian-bound second baseman went 3-for-3 to lead an 11-hit attack in a 13-6 home victory over Cimarron-Memorial in a winners bracket semifinal Tuesday.

Cornman, who is hitting .338 with 11 extra-base hits, had a single, double and triple, stole a base and scored three times to boost the Aggies’ potent offense.

“It was going to the cages after the game yesterday and really getting that swing down and really just grinding before this game,” said Cornman, who also contributed defensively with three assists and two putouts. “Just keep grinding, don’t stop. It’s playoffs, you can’t take the day off.”

After erasing a 4-1 deficit early with its seven-run outburst and clinging to an 8-6 lead, Arbor View tacked on five runs in the bottom of the sixth to put the game out of reach.

“We had a little bit of a tough inning, and we bounced back,” Aggies coach Jordan Salazar said. “These guys have done it all year. They find ways to stay positive and fight through those times. For us to come and put that (seven) spot up, and kind of get our momentum going was huge.”

“We were very confident because we knew that our pitching was going to do what it had to do,” Cornman added. “Our bats were already hot, so we basically did what we had to do to get the win.”

Las Vegas 4, Palo Verde 2 — At Palo Verde, Leonel Anaya’s two-run double in the top of the ninth inning lifted the Wildcats past the Panthers in a winners’ bracket semifinal.

Layne Adaro started the ninth-inning rally with a single. Daniel Jimenez drew a walk, and both runners moved up on Trevor Johnson’s sacrifice bunt. With two outs, Anaya stroked the go-ahead double.

Anaya finished 2-for-4 with two doubles and two RBIs, and Dalton Silet was 2-for-4 with a double and an RBI for Las Vegas.

Centennial 8, Faith Lutheran 2 — At Faith Lutheran, Trevor Wright went 3-for-3 with two RBIs to help the Bulldogs eliminate the Crusaders.

Kris Bow was 2-for-2 with a double, and Austin Kryszczuk was 2-for-4 with an RBI for Centennial.

Rancho 8, Shadow Ridge 6 — At Shadow Ridge, Raymond Minero was 2-for-3 with two runs and an RBI to help the Rams edge the Mustangs in an elimination game.

Andrew Baughn was 2-for-3 with two runs, and Adrian Gomez and Cris Verdugo each went 2-for-4 for Rancho.

James Katona’s two-run home run in the top of the sixth inning helped Liberty rally for a 3-2 win at Basic in a winners’ bracket semifinal of the Desert Region Tournament.

Dawson Beard, Devin Contreras and Ethan O’Neal combined on a no-hitter with Contreras getting the win for Liberty (22-8-1), which will visit Desert Oasis (28-6) in the winners’ final at 4 p.m. Wednesday.

Josh Rogers went 2-for-3 with a double and a run, and Logan Meusy doubled and drove in a run for the Patriots.

Desert Oasis 12, Bishop Gorman 6 — At Desert Oasis, Colton Zobrist went 2-for-3 with four RBIs and a run. and Campbell Holt was 2-for-4 with a double, three RBIs and a run as the Diamondbacks outslugged the Gaels in a winners’ bracket semifinal.

Colby Smith was 2-for-3 with a double and a run, and Parker Schmidt added two hits, two RBIs and two runs for Desert Oasis.

Cameron Hougham doubled and drove in two runs, and Carson Wells went 3-for-4 with an RBI for Gorman (20-9), which will host Spring Valley (15-15) in an elimination game at 4 p.m. Wednesday.

Silverado 9, Durango 1 — At Silverado, Austin Whittaker was 3-for-4 with three RBIs to help the Skyhawks eliminate the Trailblazers.

Andrew Maxwell was 3-for-4 with an RBI, and winning pitcher Chris Cortez was 2-for-3 with two RBIs for Silverado.

Braxton Bruschke was 2-for-2 with two runs, and Chasyn Love went 1-for-2 with a triple and an RBI for Spring Valley.

Gelkis Digurnay was 2-for-4 with a double and two RBIs to help Del Sol hold off host Chaparral, 8-7 in the opening round of the Class 3A Southern Region Tournament.

Pahrump Valley 7, Virgin Valley 4 — At Pahrump, Jake Riding pitched six innings of two-hit ball ,and Zach Trieb went 2-for-2 with a double and a run as the Trojans downed the Bulldogs.

Boulder City 8, Mojave 2 — At Boulder City, Blaze Trumble and Clark Newby each went 2-for-4 with a home run and two RBIs to lead the Eagles by the Rattlers.

Deavin Lopez was 2-for-3 with an RBI for Boulder City.

Moapa Valley 10, Valley 0 — At Overton, Slade Graham tossed a five-inning one-hitter to lead the Pirates by the Vikings.

Payton McDermott was 2-for-2 with an RBI, and Hunter Wrzesinski was 1-for-3 with a triple and two RBIs for Moapa Valley.