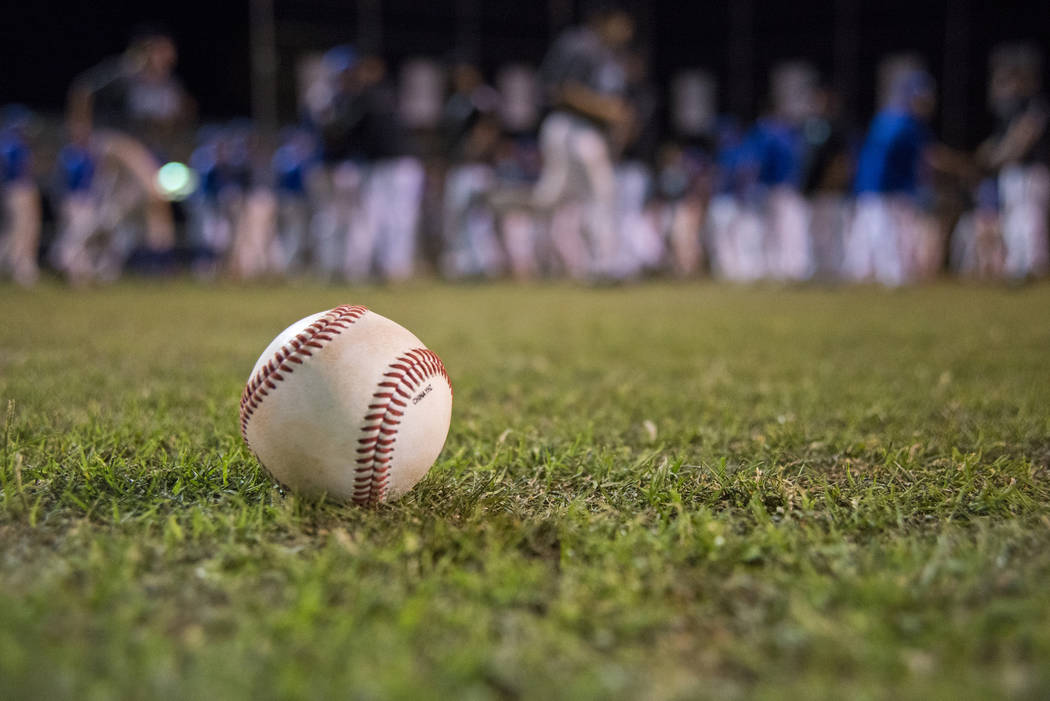 Santino Panaro’s one-out RBI single in the bottom of the fifth broke a scoreless tie, and Smirk followed with an RBI single.

Basic 13, Arcadia (Ariz.) 6 — At Tempe, Arizona, Kyle Turner’s three-run double highlighted a 12-run sixth inning that lifted the Wolves by the Titans in the Boras Classic.

The Wolves managed just two hits in the first five innings off Arcadia starter Mike Rea before beating up on the Titans’ bullpen.

Turner finished 1-for-4 with five RBIs, and Jaden King was 2-for-4 with two doubles and three RBIs for Basic.

Logan Berrier was 2-for-3 with a double and an RBI, and Dom Mercado went 2-for-4 with an RBI for Legacy.

Elijah Fuchs was 2-for-2 and scored twice for Clark.

Arbor View 14, Silverado 4 — At Arbor View, Garrett Cutting was 3-for-3 with a home run, three runs and three RBIs to guide the Aggies to a six-inning win over the Skyhawks.

Payton Brooks was 3-for-4 with two doubles and three RBIs, and Nick Cornman went 2-for-3 with three RBIs for Arbor View.

Sean Graves was 2-for-3 with a double for Silverado.

Desert Oasis 17, Durango 0 — At Durango, Aaron Roberts was 2-for-2 with a double and two RBIs as the Diamondbacks defeated the Trailblazers in four innings.

Josh Sharman was 2-for-3 with two RBIs for Desert Oasis. Jacob Walsh and Parker Smith each went 2-for-3 for the Diamondbacks.

Campbell Holt and Tyler Montoya combined on a one-hitter for Desert Oasis.

Foothill 11, Northridge (Utah) 4 — At St. George, Utah, Jake Perales went 2-for-4 with a double and three RBIs to help the Falcons down the Knights in the Easier Accounting Invitational.

Gabe Medina was 2-for-3 with two RBIs for Foothill.

Myxter struck out eight of the nine batters he faced and induced a ground out.

Coby Delaney and Christian Zachodni each had four RBIs for Calvary Chapel.

Boulder City 18, Thunder Ridge (Idaho) 0 — At Hurricane, Utah, Blaze Trumble went 2-for-3 with a double and three RBIs to lead the Eagles to an easy five-inning victory in the Spring Kick Off.

Ian Mills was 1-for-1 with a double, a run and an RBI for Boulder City.

Boulder City 14, Wasatch (Utah) 2 — At Hurricane, Utah, Issac Tuenge went 4-for-4 with an RBI to help the Eagles top the Wasps in the Spring Kick Off.

Devin Lopez was 3-for-3 with an RBI, and Trumble went 2-for-3 with a home run and two RBIs for Boulder City.

Mountain View 9, Spring Mountain 6 — At Mountain View, winning pitcher Eason Gregoire-Mazzocco went 2-for-3 with a double and three RBIs as the Saints topped the Golden Eagles in the Spring Slam.

The Meadows 5, Virgin Valley 3 — At Mountain View, Sam Kaplan tossed a five-inning three-hitter and went 2-for-2 with two doubles and an RBI to lead the Mustangs by the Bulldogs.

Brandon Medina was 2-for-3 with a double and two RBIs, and Brett Lieuallen went 2-for-3 for The Meadows.

Lake Mead 15, Spring Mountain 0 — At Mountain View, Johnathan Johnson tossed a three-inning no-hitter and struck out six to lead the Eagles by the Golden Eagles in the Spring Slam.

Bryan White was 2-for-3 with a double and four RBIs, and Joseph Johnson, Alan Underwood and Christian Brunson all went 2-for-3 for Lake Mead.

Lake Mead 11, Liberty Baptist 2 — At Mountain View, Joseph Johnson spun a five-inning one-hitter and struck out 11 to lead the Eagles by the Knights in the Spring Slam.

Johnson also went 3-for-3 with a triple and two RBIs, and Johnathan Johnson was 2-for-4 with four RBIs for Lake Mead.

White went 2-for-2 with a double and three RBIs, and Brunson was 2-for-3 for the Eagles.