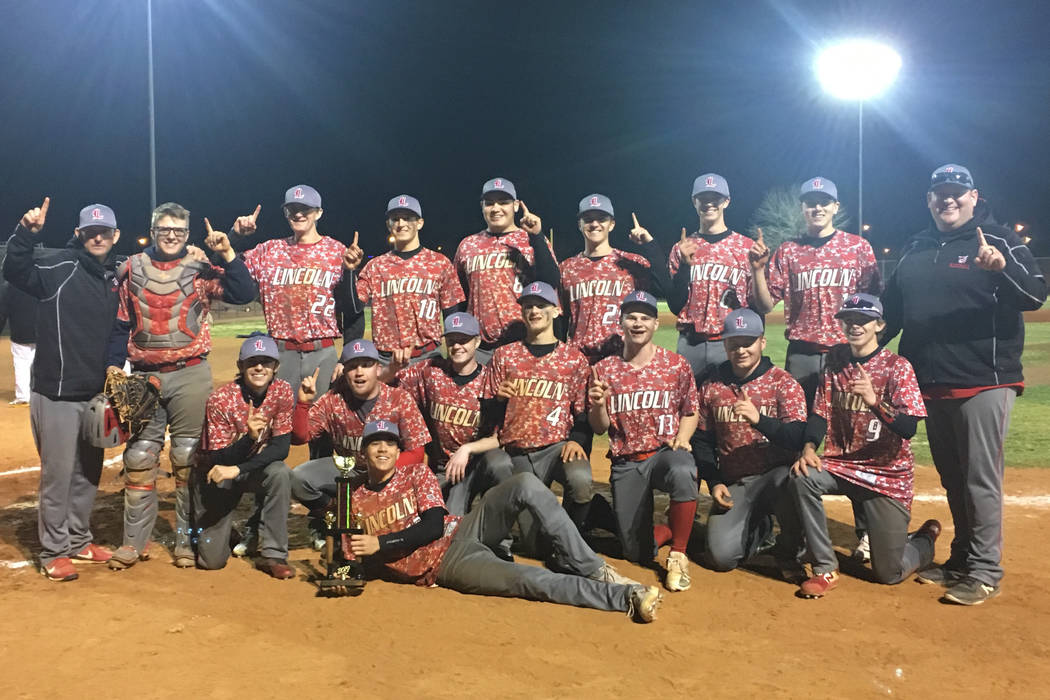 The Eagles more than made up for it from there.

Boulder City scored five runs in the sixth to take the lead, then plated 10 runs in the eighth after the Falcons had tied the game to earn a 16-6 road win.

The Eagles sent 15 men to the plate in the eighth, taking advantage of seven hits, four walks and a hit batter to earn a split in the doubleheader.

Isaac Tuenge had a two-run homer to highlight the inning. Blaze Trumble was 3-for-5 with three doubles, two runs and two RBIs for the Eagles, who trailed 4-1 after five innings.

Kelton Lachelt was 3-for-4 with three RBIs for Foothill.

In the opener, Ryan Nickell allowed a run on five hits in six innings to lead the Falcons to the 4-1 win.

Nickell struck out seven with one walk.

Reece Miller went 3-for-4 with a double, a run and an RBI, and Tommy Dirk was 2-for-3 with a double and two runs for Foothill.

Faith Lutheran 6-7, Spring Valley 4-4 — At Spring Valley, Sagan Gronauer went 3-for-4 with a triple, two doubles and two RBIs in the nightcap to help the Crusaders sweep the Grizzlies.

Jacob Ortega was 1-for-3 with two RBIs in the second game for Faith Lutheran.

In the opener, Dylan Schafer went 3-for-5 with a double, and Gronauer was 2-for-3 with a triple and two RBIs to help Faith Lutheran to the win.

Chase Rodriguez was 2-for-3 with an RBI, and Ryan Steinhauer, Dulittle and Higgins each added two hits for Spring Valley.

Shadow Ridge 10-10, Durango 4-4 — At Durango, Ashton Caniglia went 3-for-3 with two triples and two RBIs in the second game to help the Mustangs complete a sweep of the Trailblazers.

Kadin McDonald was 2-for-4 with two RBIs for Shadow Ridge.

Irvin Weems was 3-for-4 with a double and an RBI, and Daniel Hauben went 2-for-4 with two doubles and an RBI for Durango.

In the opener, Kristian Saldana went 3-for-5 with a double and an RBI, and Branson Tressler was 2-for-4 with two doubles and two RBIs for Shadow Ridge.

Renae Lara and Jacob Bavaro each went 2-for-3 with a double for Durango in the first game.

Silverado 3-6, Bonanza 2-0 — At Bonanza, Jared Nixon and Ryeant Horacek combined on a two-hit shutout in the nightcap as the Skyhawks swept the Bengals.

Brant Hunt was 1-for-2 with an RBI, and Austin Whittaker was 1-for-3 with a run and an RBI for Silverado.

In the opener, Andrew Maxwell stranded the tying run at second base in the bottom of the seventh inning to preserve Silverado’s win.

Whittaker was 2-for-4 for Silverado.

Bonanza’s Julian DeLeon went 3-for-3 in the opener.

Lincoln County 6, Clark 1 — At Eldorado, McKinley O’Connor and Kamdon Lewis each went 3-for-3 to help the Lynx beat the Chargers in the championship game of the Sundevil Invitational.

O’Connor doubled twice and had one run and one RBI. Lewis had a double, a run and an RBI for Lincoln County.

Lincoln County 4, Chaparral 0 — At Eldorado, Kobe Walker tossed a shutout as the Lynx moved into the finals by downing the Cowboys in six innings.

Alex Vincent was 2-for-2, and Mason Thornock and O’Connor each went 1-for-2 with an RBI for Lincoln County.

Clark 10, Tech 2 — At Eldorado, the Chargers scored nine runs in the first two innings to defeat the Roadrunners in the other semifinal.

Lincoln County 9, Del Sol 2 — At Eldorado, Walker was 2-for-4 with four RBIs as the Lynx downed the Dragons in six innings in a quarterfinal.

Chaparral 10, Mojave 7 — At Chaparral, Rodney Elosegui went 2-for-3 with three runs and two RBIs as the Cowboys rallied from a 7-3 second-inning deficit to top the Rattlers in a quarterfinal.

Dairon Oliva was 2-for-3 with two RBIs, and Christopher Acosta was 2-for-4 for Chaparral.

Mike Cianci was 2-for-2 with a double with two RBIs for Mojave.

Tech 11, Canyon Springs 0 — At Chaparral, Matt Martinolich tossed a five-inning three-hitter and struck out five to lead the Roadrunners by the Pioneers in a quarterfinal.

Clark 17, Eldorado 0 — At Eldorado, Joey O’Connor was 3-for-3 with three runs, and Kevin Ostfeld went 3-for-3 with two runs and two RBIs as the Chargers routed the Sundevils in three innings in a quarterfinal.

Steven Shoats was 2-for-3 with two runs and two RBIs for Clark.

Clark’s Elijah Fuchs allowed one hit and struck out one in three innings to get the win.

Del Sol 16, Desert Pines 1 — At Eldorado, Gelkis Digurnay was 3-for-4 with a double, four runs and four RBIs as the Dragons routed the Jaguars in four innings in a first-round bracket game.

Javier Marti was 2-for-4 with a triple, two runs and four RBIs, and Bradley Walton went 2-for-3 with two runs and two RBIs for Del Sol.

Fernando Fuentes was 1-for-2 and scored Desert Pines’ lone run.

Mojave 10, Eldorado 2 — At Chaparral, Mike Cianci went 4-for-4 with a triple, a double, two runs and two RBIs to lead the Rattlers by the Sundevils in a consolation game.

Jeraun Irby was 2-for-3 with two runs, and Tyler Beadles and Caleb Forepaugh each went 2-for-4 with a double and an RBI for Mojave.

Aaron Rogers was 2-for-3 with a double and a run for Eldorado.

Desert Pines 13, Canyon Springs 6 — At Chaparral, Jorge Milian was 4-for-4 with a triple, two runs and two RBIs as the Jaguars downed the Pioneers in five innings in a consolation game.

Joseph Maxwell was 2-for-3 with a double and an RBI, and Eric Gomez was 2-for-2 with four runs and an RBI for Desert Pines.

Gavin Rhynes was 1-for-3 with a home run for Canyon Springs.

Quaney also went 2-for-2 with an RBI.

Anthony Ortiz and Ricardo Garcia each went 2-for-3 with two RBIs, and Mike Overland was 2-for-4 with two RBIs for Cimarron.

Cimarron-Memorial 10, Skyline (Utah) 1 — At St. George, Utah, Andrew Johnson was 3-for-3 with a double, three runs and three RBIs as the Spartans tamed the Eagles in six innings in the K.J. Harrison Classic.

Zach Culver went 2-for-4 with two RBIs, and Ethan Daniel was 2-for-3 with an RBI for Cimarron.

Southwest (Calif.) 5, Pahrump Valley 1 — At Bullhead City, California, the Trojans had a seven-run fifth inning erased when the time limit expired, forcing the teams to revert to the score after four innings and allowing the Eagles to top Pahrump.

Tyler Floyd was 3-for-3, and Zach Trieb went 2-for-2 for Pahrump, which deliberately had its final two batters of the top of the fifth retired to try to get Southwest to the plate before time expired.

Cyle Havel was 2-for-2 with three runs and an RBI, and Willie Lucas was 1-for-1 with a double and two RBIs for Pahrump, which got two hits apiece from Joey Koenig, Chase McDaniel and Dylan Grossell.