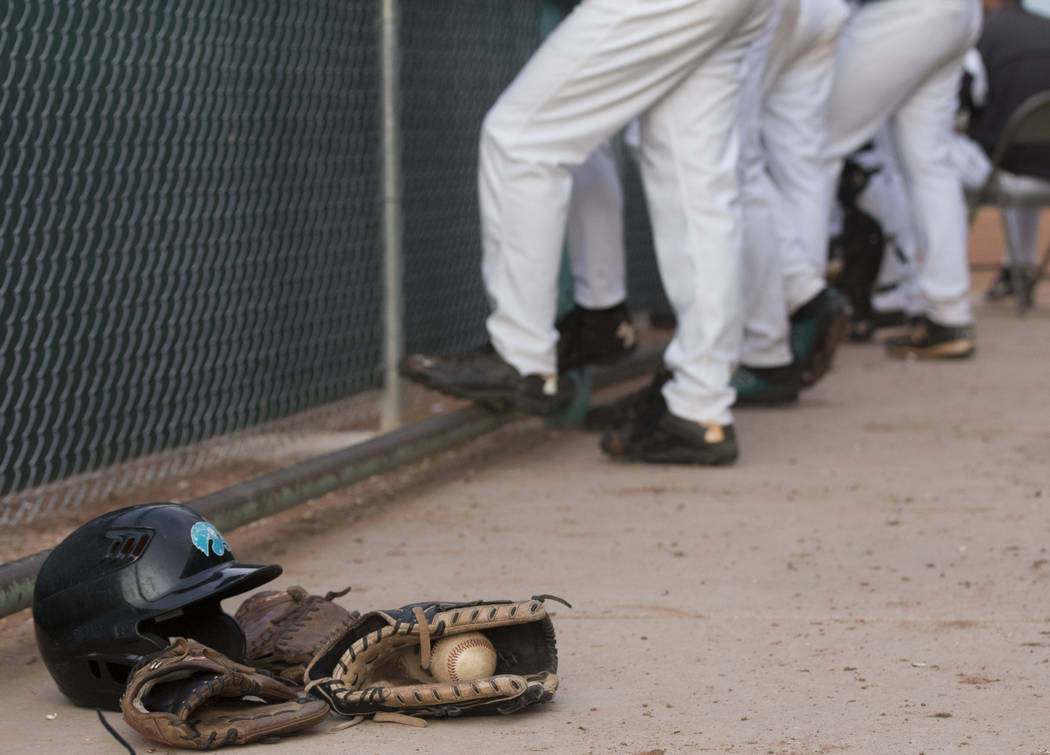 The state champs added another trophy to their collection on Saturday at Mountain View.

Behind a strong outing from sophomore pitcher Talon Phillips, Lincoln County took full advantage of early miscues from The Meadows to get in front and then cruised to the Class 2A Southern League baseball title with a 10-3 victory.

It was the sixth straight league playoff championship for the Lynx, who will try to win the school’s fourth consecutive state title (and 10th overall) when the state tournament begins Thursday at The Meadows. The Mustangs also advanced to state.

“When the winning really started, these seniors were freshmen,” Lincoln County coach Raymond Wadsworth said. “They’ve been the core group. They don’t know any other thing.”

The Lynx (27-2) actually did fall behind early on Saturday.

The Mustangs’ Brett Lieuallen led off the game with a single. He advanced to second on an errant pickoff throw and to third on a wild pitch. Trey Covell drew a two-out walk, and a double steal allowed Lieuallen to score and give the Mustangs (19-7) a 1-0 lead.

Alex Vincent led off the bottom of the first with a solid single and stole second base. Vincent took third when Mason Thornock struck out but reached on a wild pitch.

The Lynx then tried a delayed steal with Thornock, who eventually was tagged out by Mustang pitcher Jerry Appelhans. Vincent scored on the play.

Kobe Walker was hit by a pitch.Two batters later, Camden Lewis grounded into a fielder’s choice as Walker scored to give Lincoln County the lead for good, 2-1.

The Lynx took advantage of a walk, a balk and a wild pitch to extend the lead to 3-1 in the second. Two more walks, a wild pitch and an error led to another pair of runs in the third.

Then Lincoln County sent 10 batters to the plate in the fifth and scored five times to put the game out of reach at 10-2.

In the inning, Vincent got his third hit of the game, drove in a run and scored for the second time.

“It all depends on me,” Vincent said. “If I strikeout, it sets us up for striking out. I get a hit, it starts that.”

Walker also had three hits and reached in all four of his plate appearances.

It all added up to another regional title and a primer for big state dreams.

“These boys have high expectations for each other, the staff and the team,” Wadsworth said. “I’ve just enjoyed going along for the ride.”

Brendan Thorpe’s two-run double to left-center plated Deavin Lopez with the tying run and Scott Bahde with the winning run with two outs in the bottom of the seventh inning as Boulder City stormed back to top Moapa Valley, 8-7 in the Class 3A Southern Region final at Pahrump Valley.

Jimmy Dunagan’s single started the rally in the seventh. The Eagles (26-8) also benefitted from a walk and two errors.

Gavin Hadley was 2-for-3 with a double and an RBI for Moapa Valley (19-11), which will join Boulder City in next week’s state tournament.

Coby Longman added a home run for the Pirates.

Aaron Avery tossed a five-hit shutout in the second game Saturday as host Indian Springs finished off a doubleheader sweep of Pahranagat Valley with a 3-0 win in the winner-take-all Class 1A Southern Region championship game.

Stockton Maxwell was 2-for-3 for the Panthers (19-3), who will join Indian Springs in nex week’s state tournament.

Ryan Gertz was 4-for-4 with two RBIs for Indian Springs.

Jesse Jones was 2-for-3 with an RBI for Pahranagat Valley.