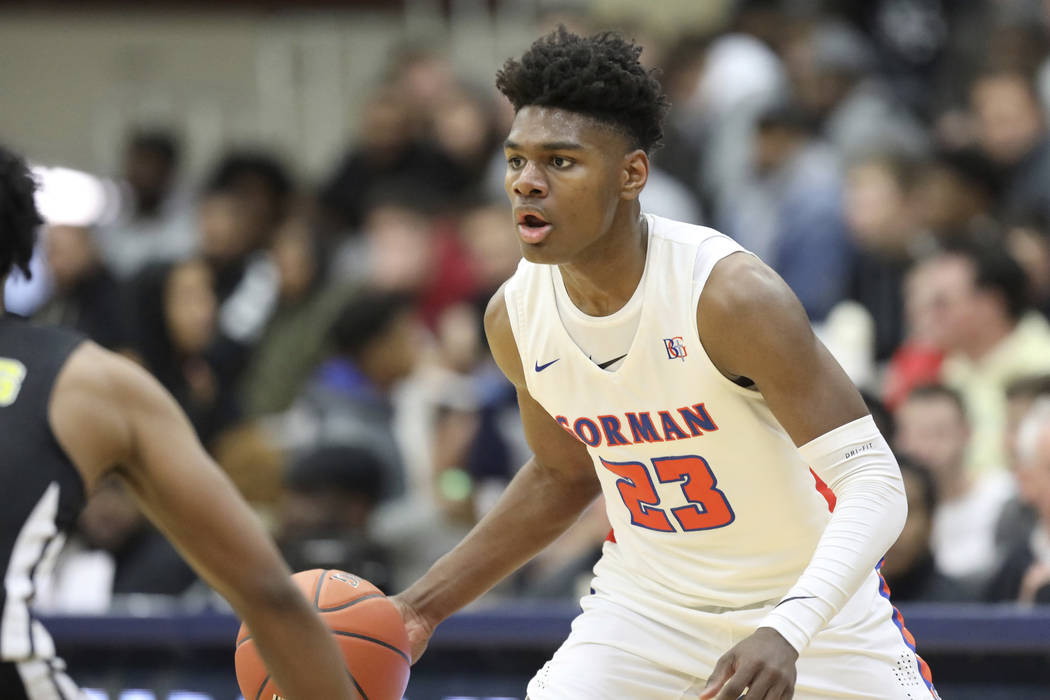 Mwani Wilkinson had 25 points and 11 rebounds to lead the Bishop Gorman boys to an 81-48 home win over Basic on Friday in the Desert Region quarterfinals.

The Gaels (24-3), the Southwest League’s No. 1 seed, are gunning for a state record ninth straight state title.

Will McClendon scored 12, Zaon Collins had 11 points and 10 assists and Christian Bento added 11 points and eight rebounds for the Gaels, who will meet Liberty in the semifinals at 4:40 p.m. Tuesday at Desert Oasis.

John Board led the Wolves with 12 points, and Isaiah James scored 10.

Liberty 71, Spring Valley 69 — At Liberty, Moliki Matavao scored his only basket on a putback as time expired to lift the Patriots in the quarterfinals.

Julian Strawther led Liberty (20-6) with 26 points, Joshua Jefferson scored 19 and Dante Davis 11. The Patriots are the Southeast League’s No. 2 seed.

Coronado 86, Silverado 72 — At Coronado, Jaden Hardy had 38 points, 12 assists and 11 rebounds to lead the Cougars in a quarterfinal victory.

Hardy also had five blocks and three steals for Coronado (19-7), which outscored the Skyhawks 44-24 in the second and third quarters.

Coronado, the Southeast League’s top seed, will meet Durango in the semifinals at 8 p.m. Tuesday at Desert Oasis.

Durango 71, Foothill 62 — At Durango, Anthony Hunter scored 24 points to lead the Trailblazers in the quarterfinals.

Sebastian Mack scored 19 points, and Jacob Howard had 10 points and 10 rebounds for the Trailblazers (18-8), who led 31-18 at halftime. Durango is the Southwest League’s No. 2 seed.

Eli Habighorst and Rudger Welch scored 14 points each for the Falcons (16-12).

Larry Holmes scored 21 points and Deon McDaniel 15 for the Aggies (17-9), who outscored the Wildcats 26-9 at the free-throw line. Arbor View, the Northwest League’s top seed, will play Faith Lutheran in the semifinals at 4:40 p.m. Tuesday at Desert Pines.

Attanasio had 24 points to lead the Crusaders (19-9), who hit nine 3-pointers. Jason Sims scored 22 for Faith Lutheran, the Northwest League’s No. 2 seed.

Alexander Spaight scored 27 and Zarius Benson-Moore 18 for the Pioneers (16-12).

Desert Pines 78, Legacy 54 — At Desert Pines, Anthony Swift had 18 points and nine rebounds for the Jaguars in a quarterfinal win.

Milos Uzan (17), Dayshawn Wiley (16), Cimarron Conriquez (11) and Darnell Washington (11) also scored in double figures for the Jaguars (18-9). Desert Pines, the Northeast League’s No. 1 seed, will play Cheyenne in the semifinals at 8 p.m. Tuesday at Desert Pines.