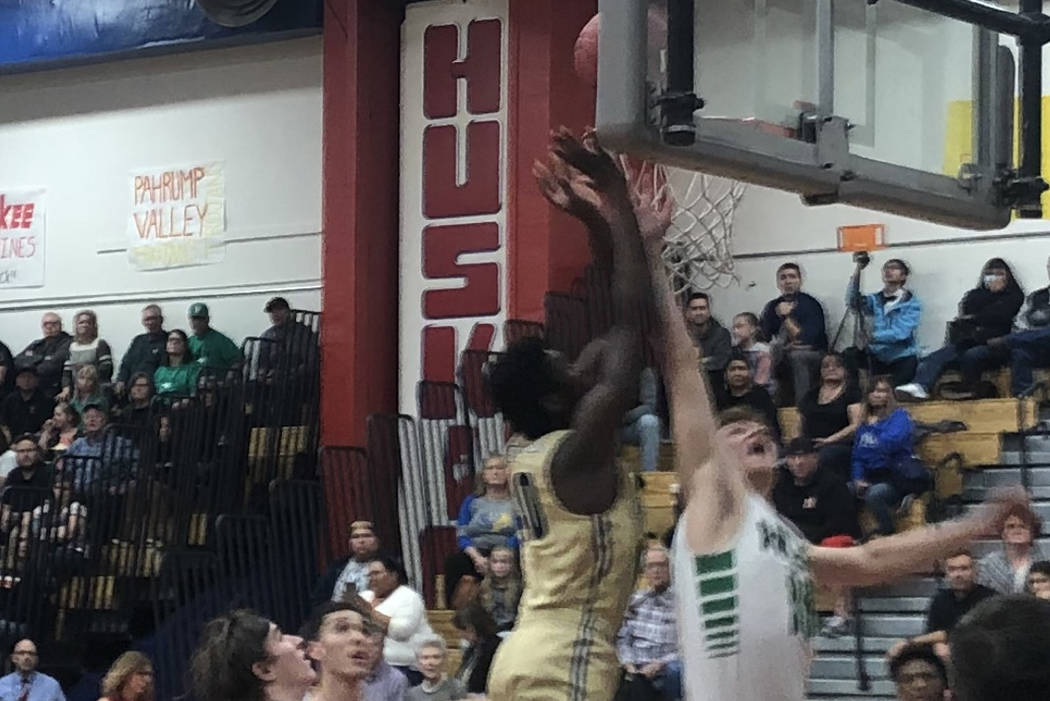 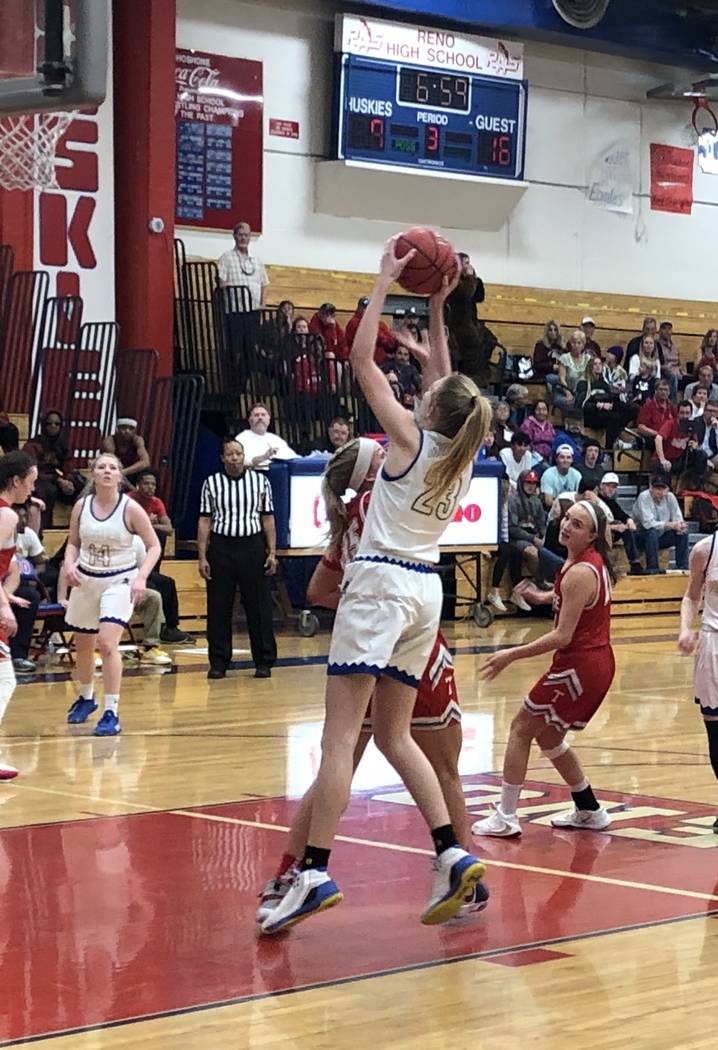 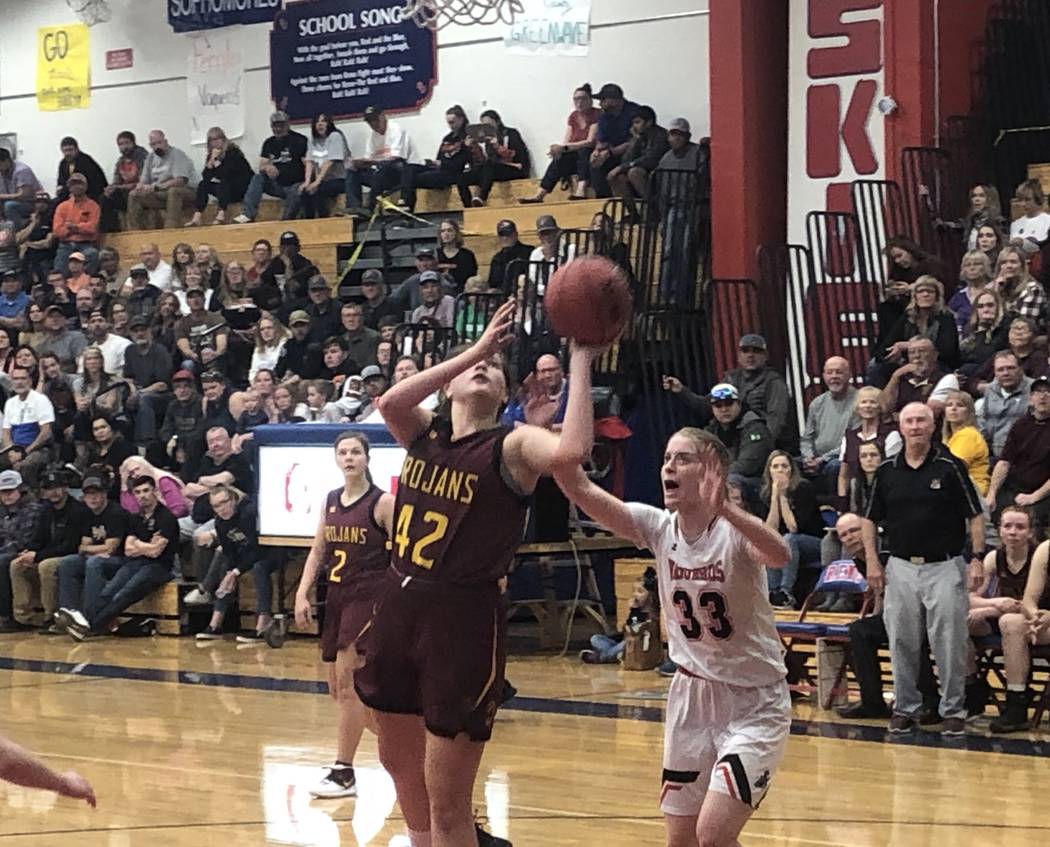 Kathryn Daffer goes up for a shot against Fernley in Pahrump Valley's 57-51 loss in the Class 3A girls state semifinals Thursday at Reno High School. Jason Orts/Las Vegas Review-Journal 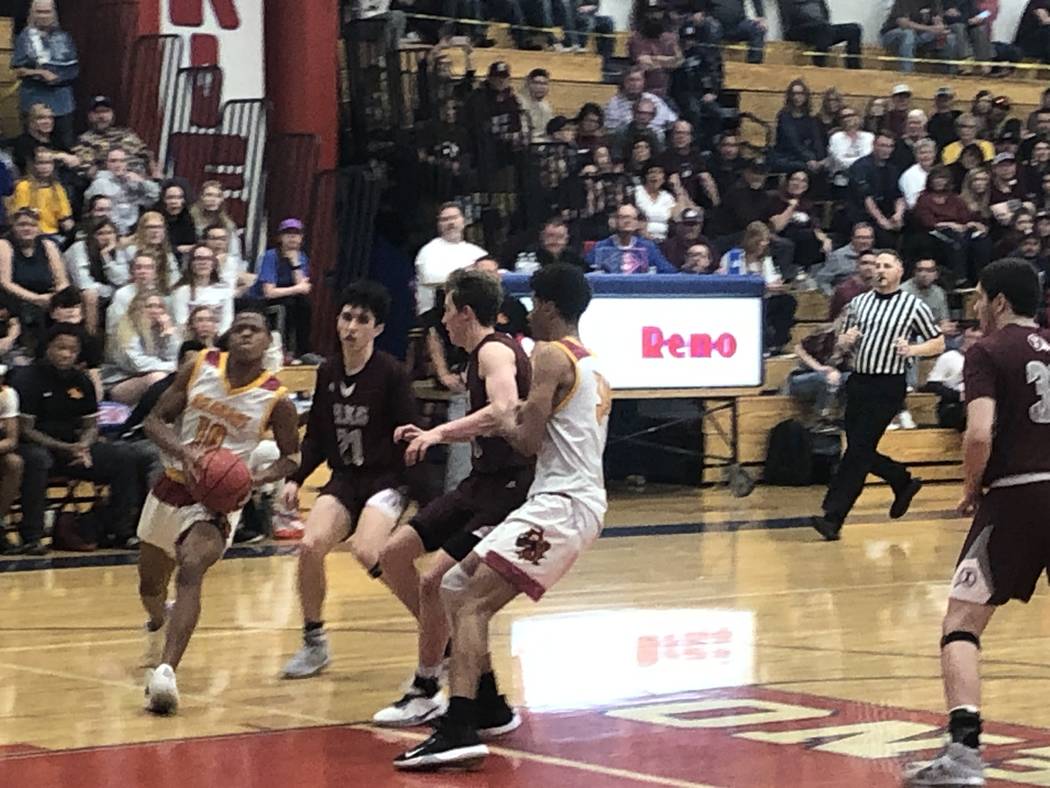 Del Sol's Damani Wilks drives to the basket during the Dragons' loss to Elko in the Class 3A boys state semifinals Thursday at Reno High School. Jason Orts/Las Vegas Review-Journal

RENO — Ethan Speaker scored 28 points for Boulder City, but the Eagles fell behind early in a 67-57 loss to Churchill County in the Class 3A boys state basketball semifinals Thursday at Reno High School.

The Greenwave will meet Elko in the state championship game at 1:50 p.m. Friday at Lawlor Events Center.

Matt Morton added 18 points for the Eagles, and he and Speaker combined to score all but four of their 37 points in the second half.

Elko 73, Del Sol 65 — At Reno High School, Michael Klekas scored 27 points to lead four players in double figures, and the Indians pulled away late in the first half.

Dawson Dumas made five of Elko’s 10 3-pointers and had 15 points. Sean Klekas scored 14 and Jacob Zeller 11.

Nati Asfaw led Del Sol with 21 points, and Jabarie Savoy scored 11. The Dragons were outscored 18-8 from the free-throw line.

In a game that featured six ties and nine lead changes, Fernley finally took control with six points in less than a minute late in the third quarter to build a six-point lead. The Trojans twice got within two from that point.

The Vaqueros will meet Truckee in the state championship game at noon Friday at Lawlor Events Center.

Emma Cooley scored 10 points, five of them during the early spurt, and was the Wolverines’ only double-figure scorer.

The Pirates finished with eight field goals, and their chances were limited by an inability to keep Truckee to one shot attempt. Kaitlyn Anderson led Moapa Valley with 13 points.

Pahranagat Valley trailed 25-22 at halftime, but outscored the Falcons by six points in each of the final two quarters to secure the win. Preston Higbee scored 14 for the Panthers, who will meet Mineral County at 5:30 p.m. Friday at Lawlor Events Center.

West Wendover 61, Incline 54 — At Lawlor Events Center, Miguel Parra scored 22 points and Jesus Gonzalez 20, and the Wolverines shook off a sluggish second quarter to claim the 2A state title.

Incline 38, White Pine 30 – At Lawlor Events Center, the Highlanders locked down on defense in the first half and won the 2A state championship.

Olivia Hendrix and Eva Kingston scored 10 points apiece for Incline, which limited White Pine to eight points in the first half. Madison Cornell led the Bobcats with 11 points, and Eiley Tippins scored 10.