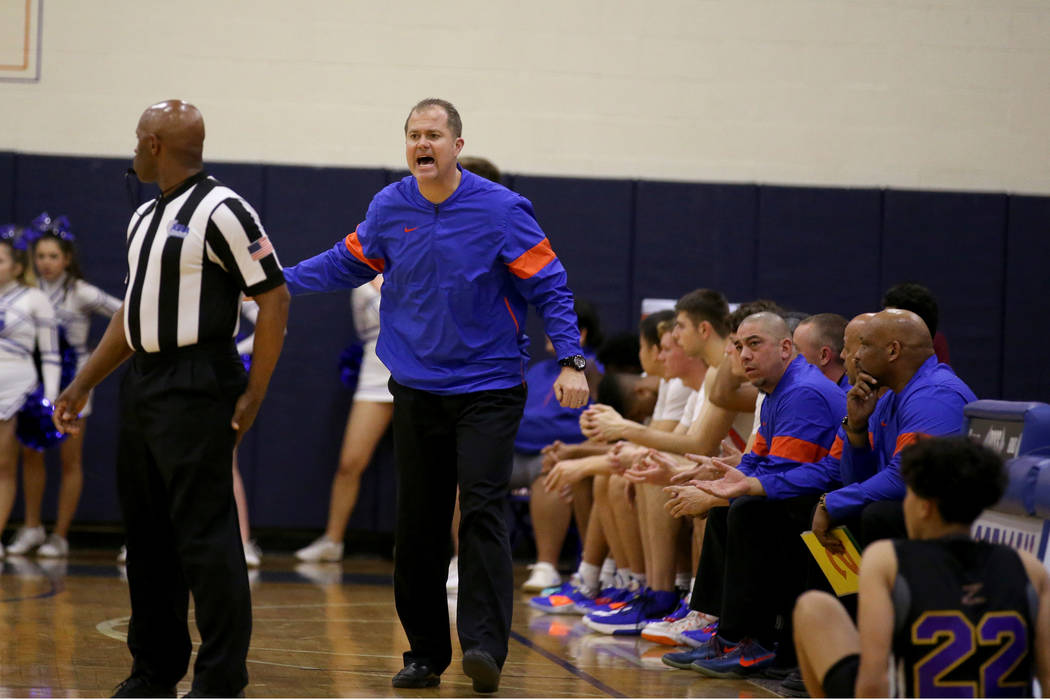 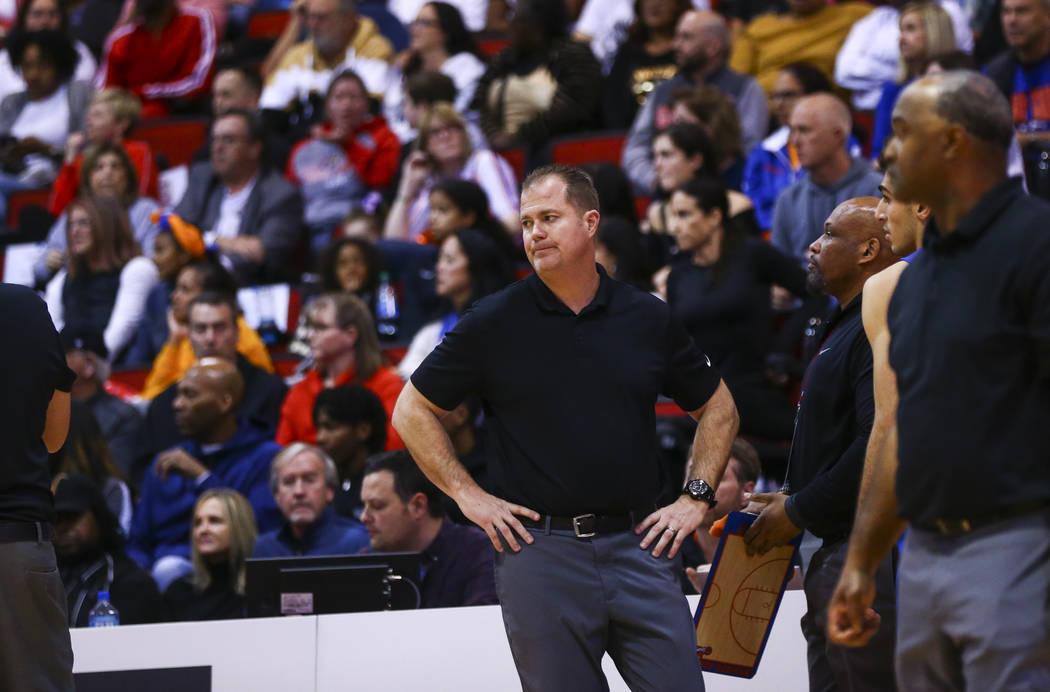 Bishop Gorman head coach Grant Rice watches as his team plays Coronado during the first half of a basketball game at the Cox Pavilion in Las Vegas on Friday, Jan. 24, 2020. (Chase Stevens/Las Vegas Review-Journal) @csstevensphoto

RENO — Grant Rice was a graduate student. He worked at a hotel. He was even a reporter at one point.

“I was sticking a microphone in people’s faces,” Rice said with a chuckle. “I was just trying to figure things out.”

He figured it out, all right.

Coaching boys basketball at Bishop Gorman and coaching it well.

In 19 seasons, Rice has relied on collaboration and tradition to build the Gaels into a national powerhouse with 500 wins and 12 state championships, including eight straight. He’s hoping to end a challenging but rewarding season with two more victories and a ninth consecutive title this week at the Class 4A state tournament at Lawlor Events Center. Gorman meets Spanish Springs in the semifinals at 8:15 p.m. Thursday.

The Gaels lost Division I big men Isaiah Cottrell and Max Allen to out-of-state programs before the season and have been without Stanford recruit Noah Taitz, who has missed most of the season with a knee injury.

But they haven’t missed a beat and have been a top 25 team in the national rankings for most of the season.

“(The tradition here) is everything,” senior wing Braden Lamar said. “To me, just even thinking about how it would feel to be the senior class that blew the streak is sickening.”

Rice, 45, played forward at UNLV from 1996 to 1998 and dabbled in a variety of trades before becoming Gorman’s coach in 2001. His father, Lowell, was a longtime basketball coach, as was his brother, Dave.

Grant Rice didn’t think he would follow in his family’s footsteps, but he had fostered a relationship with the school’s athletic director and was hired with no head coaching experience.

“He wanted to take a chance on somebody young that he believed in,” Rice said. “I was just as surprised as anybody.”

The Gaels capped Rice’s first season with a state championship in 2002 and evolved in the past two decades into one of the premier programs on the West Coast, if not the nation. He began taking his teams across state lines more to play in different events and has since developed a network of contacts across the country that have provided additional platforms for Gorman to flourish.

He also credits the commitment of his assistant coaches, to whom he’ll humbly defer to in practices and games.

“He’s not too prideful like some head coaches might be,” assistant Rich Thornton said. “He knows it takes a complete staff. … He’s the most humble guy in the world. He doesn’t have a huge ego like some coaches with 500 wins might have. He lets guys do their jobs. He knows it’s a good formula.”

The Gaels figured to be one of the country’s top five teams this season, armed with high-major guards, wings and post players who helped the team qualify for GEICO’s prestigious national tournament last spring in New York. The departures of Cottrell and Allen and Taitz’s injury changed the makeup of the roster and the team’s stylistic approach.

“After those guys left, it was a bit deflating,” Thornton said. “But our goals didn’t change.”

The Gaels have morphed into a small-ball juggernaut with four-star guards Zaon Collins and Will McClendon, four-star forward Mwani Wilkinson and swingmen Johnny Braggs and Lamar. They prepared to play a faster pace and pose matchup problems across the lineup with five players who can dribble, attack and shoot.

Gorman rolled again through in-state competition and hasn’t lost locally since the 2016-17 season.

“It’s not going to be forever,” Rice said. “But we’re having a lot of fun right now.”