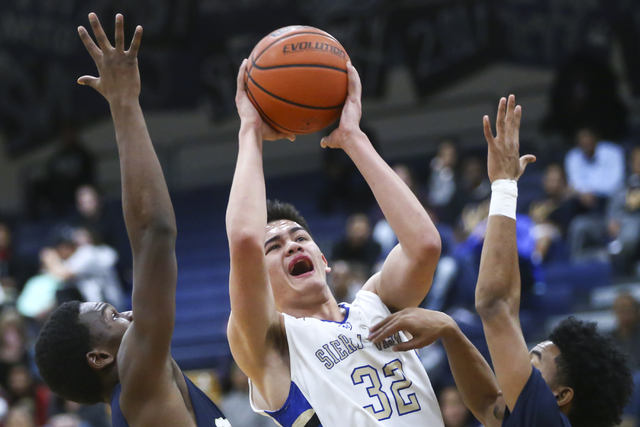 The junior guard poured in 52 points in an 86-79 home win over Desert Oasis. Ellis then scored 12 of his 23 points in the fourth quarter in a 51-48 home win over Bonanaza.

The junior guard averaged 24.5 points in victories over Shadow Ridge and Cimarron-Memorial to help the Longhorns clinch a postseason berth

The sophomore quarterback completed 25 of 41 passes for 362 yards and seven touchdowns to lead the Cougars to Southeast League wins over Liberty and Silverado. Shannon also rushed for 80 yards and a score last week.

MOJAVE — Wrestler Sergio Salazar placed first at the Southern Nevada Invitational at 195 pounds, picking up pins in the semifinals and finals. Bowler Jodie Pauole averaged 140 in her three games to help the Rattlers to the No. 3 seed in the postseason.

SHADOW RIDGE — Wrestler Alika Villiatora finished 6-0 in the Northwest League with a pin over Cimarron-Memorial and will be the top seed in the Sunset Region tournament at 132 pounds. Flag football player Samantha Milanovich led thew Mustangs to two league wins with 253 combined yards and had four touchdowns.