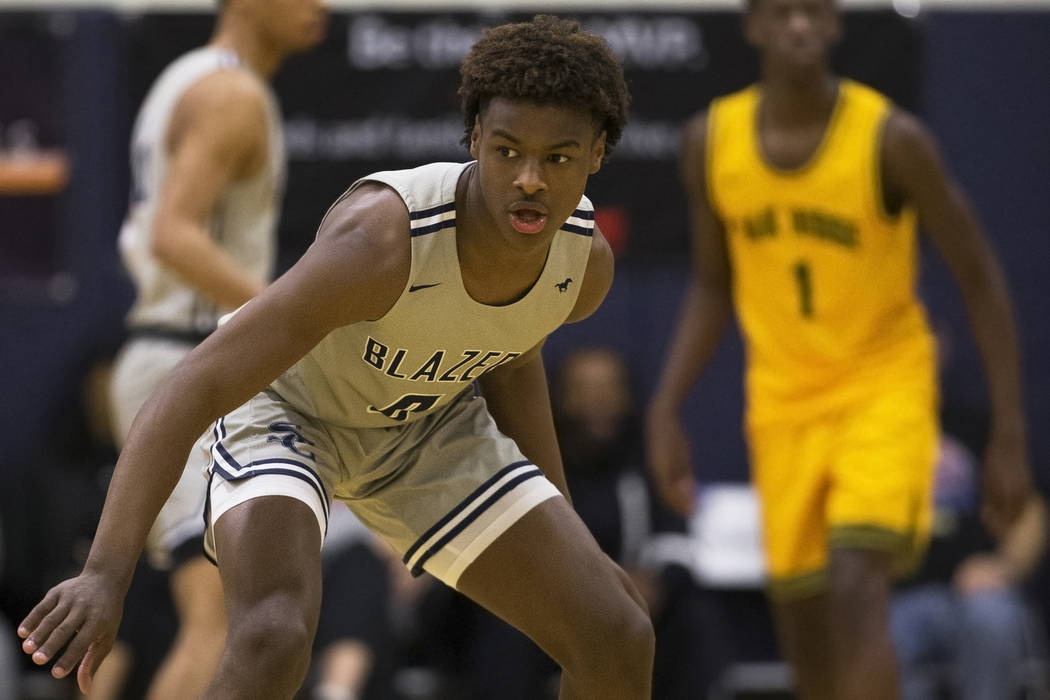 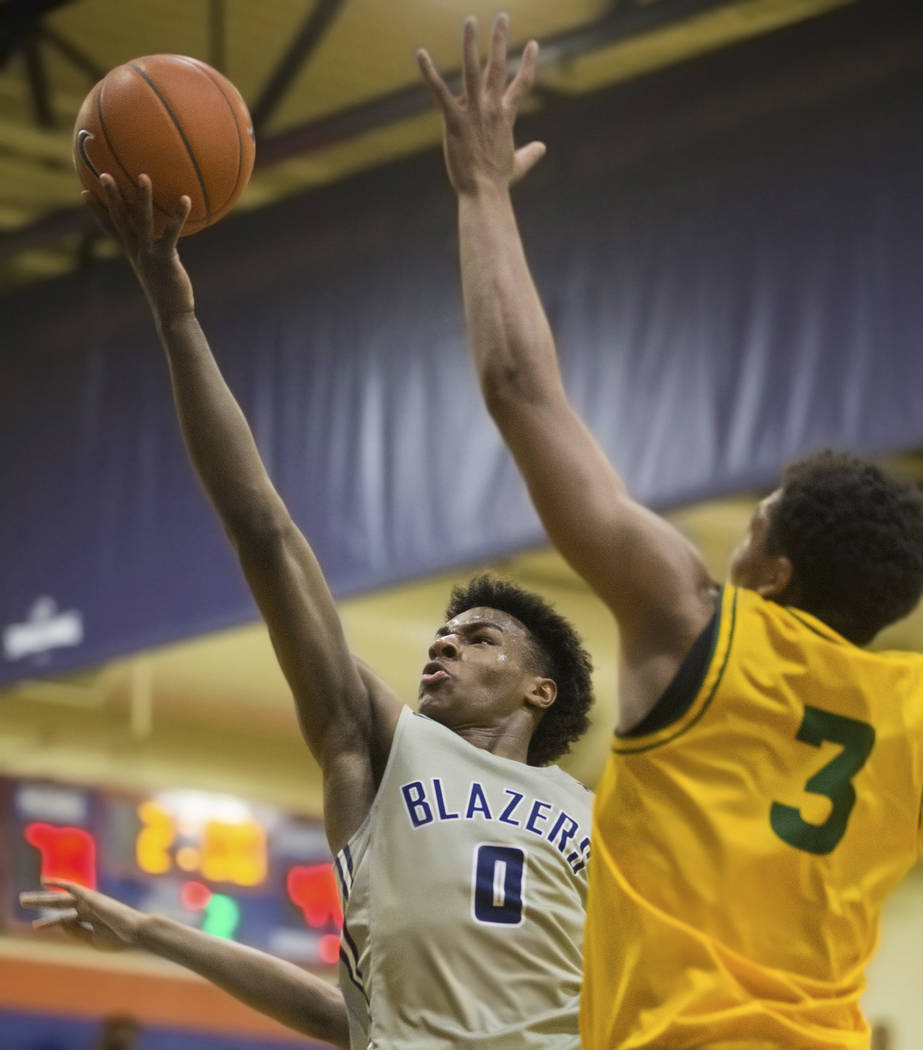 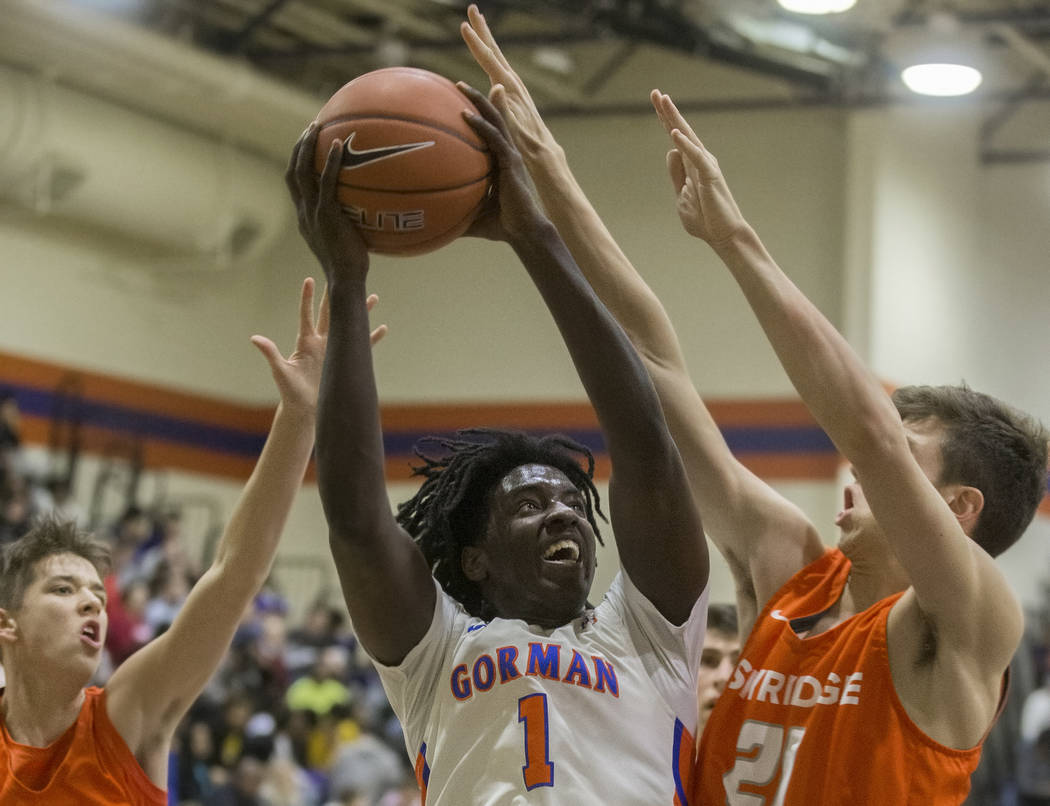 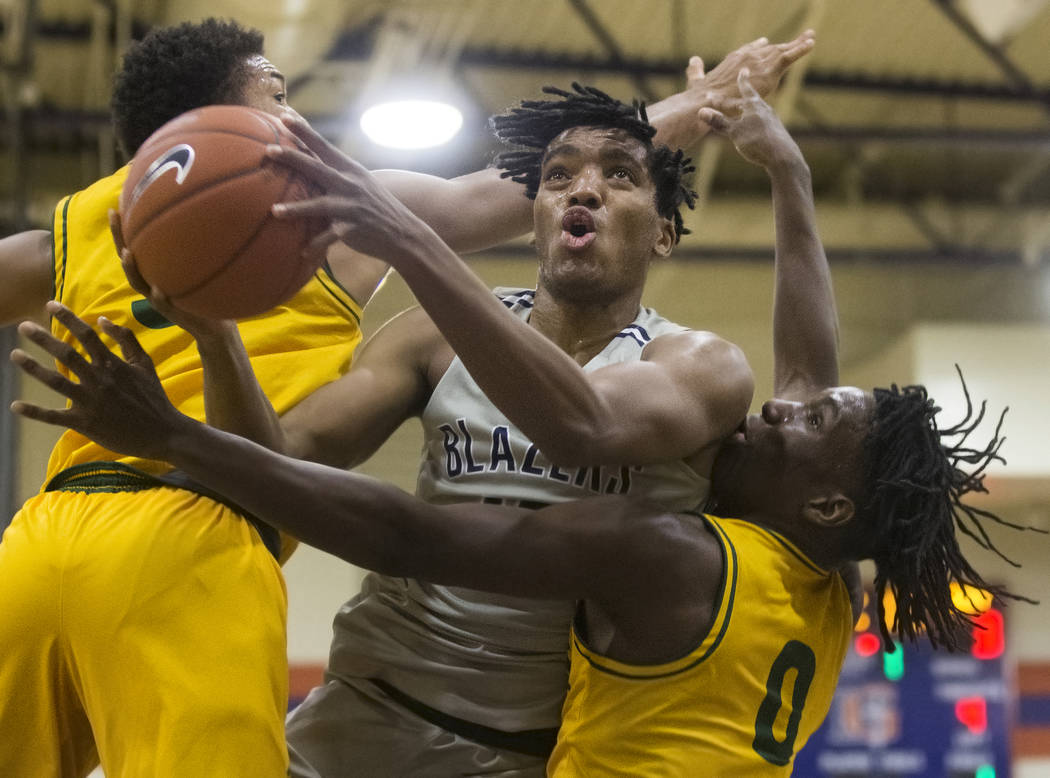 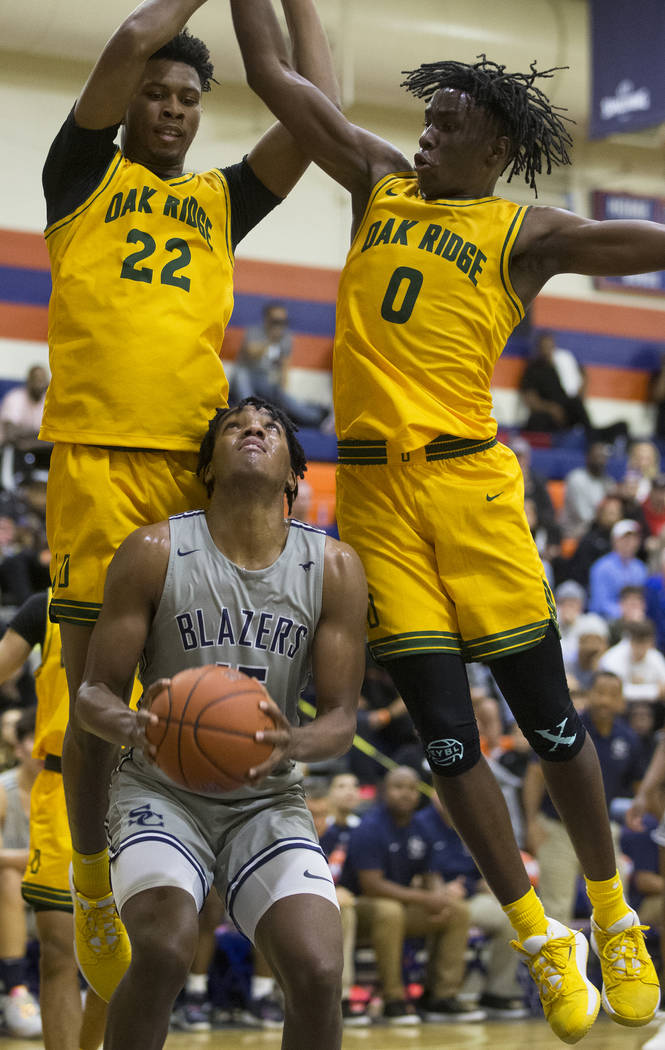 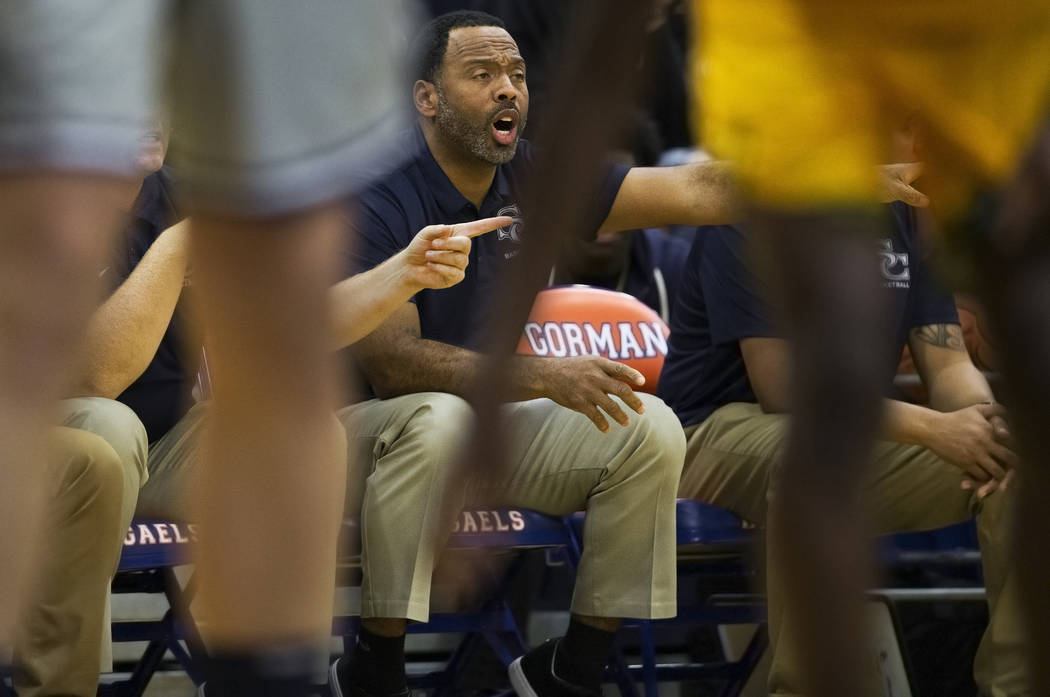 Sierra Canyon head coach Andre Chevalier coaches up his team in the second half during their game against Oak Ridge during the Tarkanian Classic on Wednesday, Dec. 18, 2019, at Bishop Gorman High School, in Las Vegas. (Benjamin Hager/Las Vegas Review-Journal) @benjaminhphoto 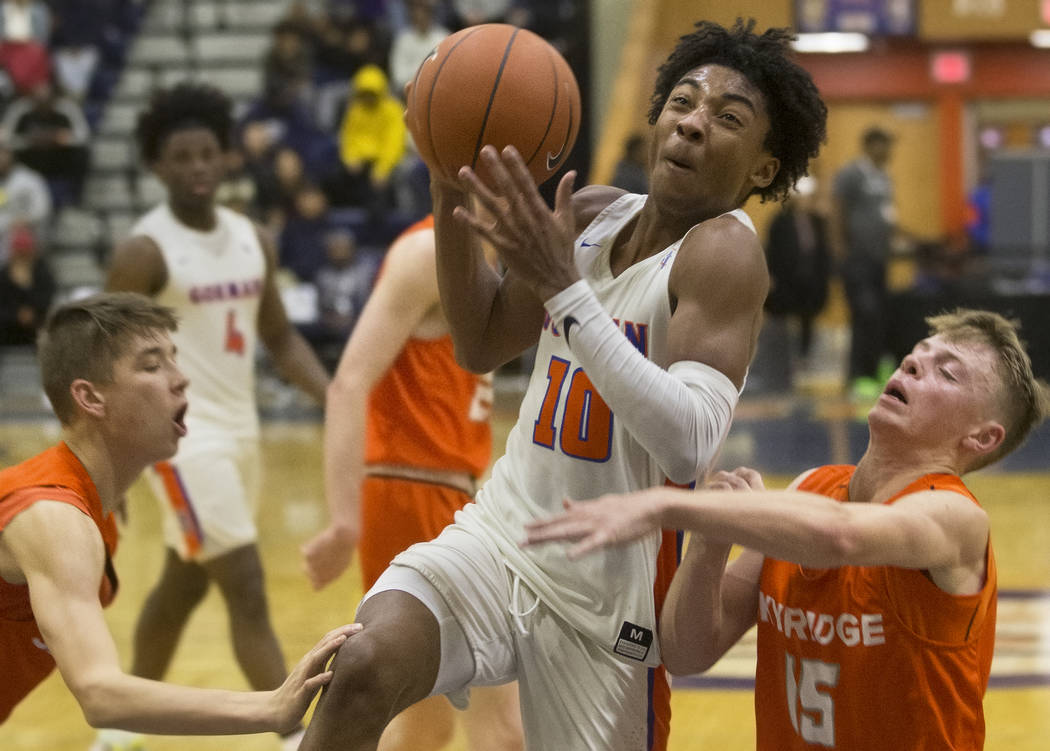 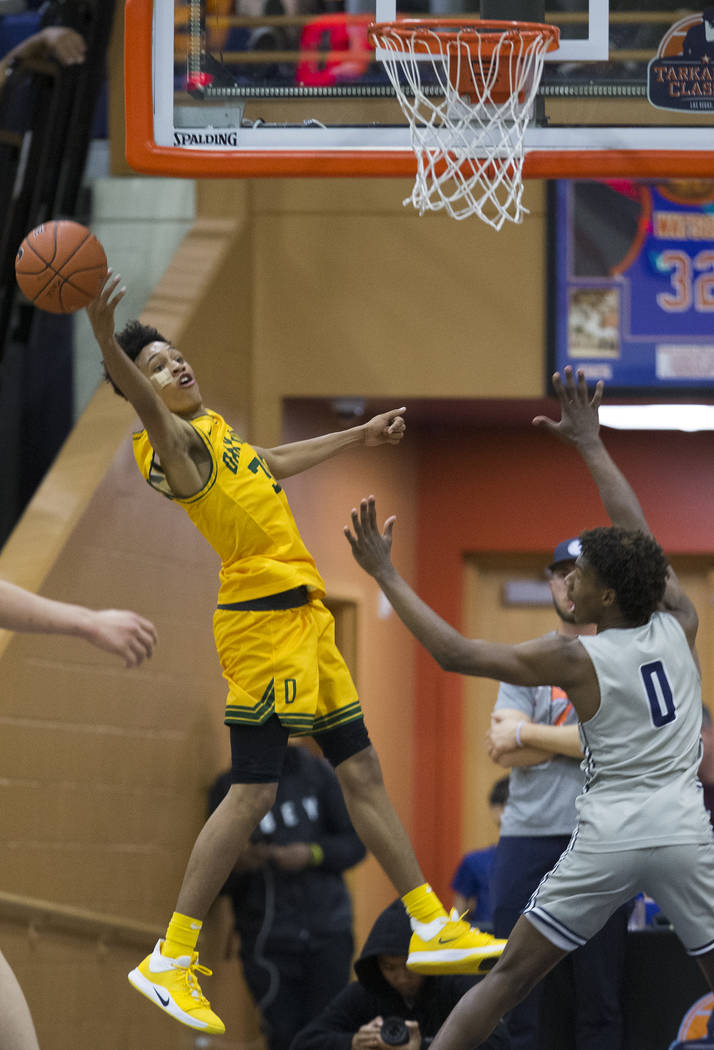 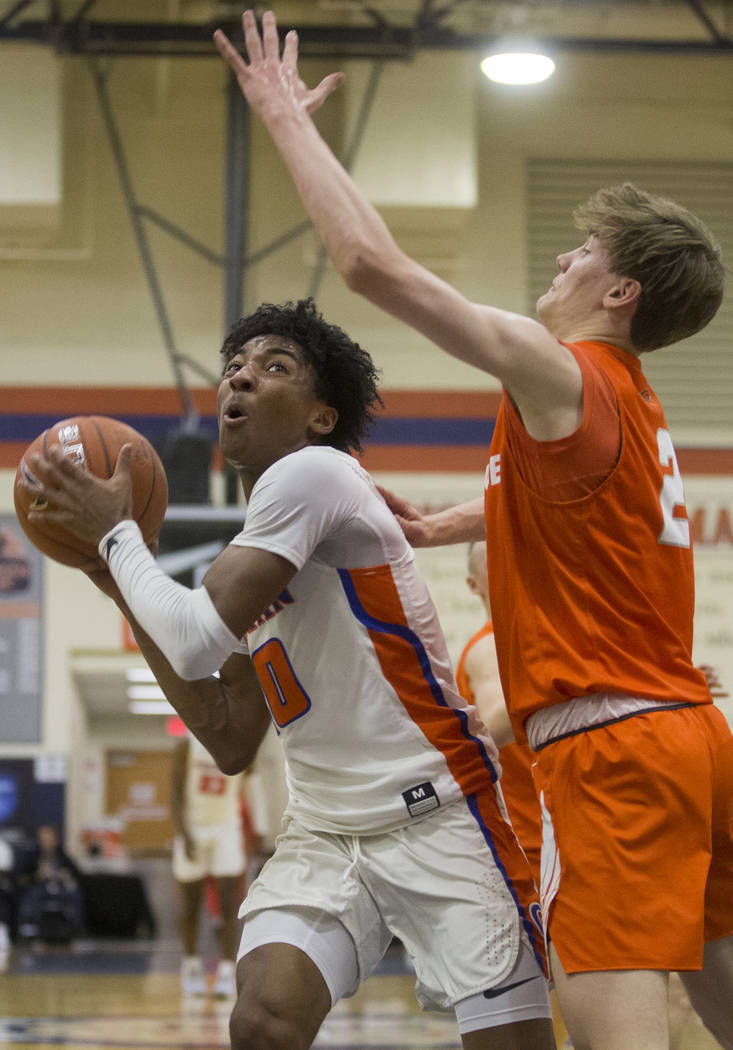 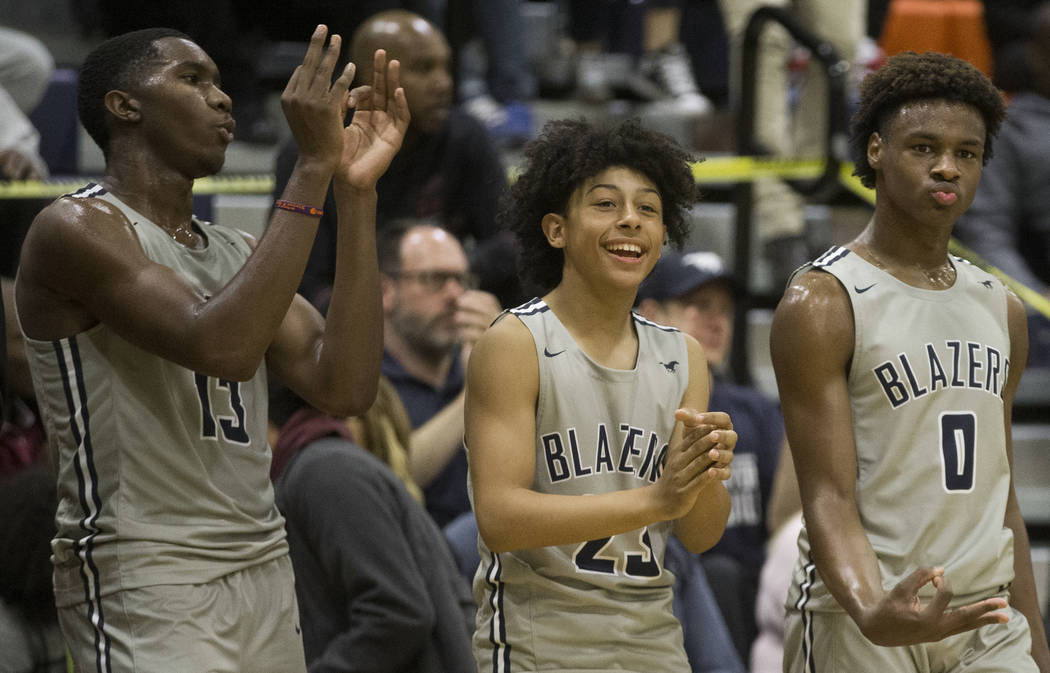 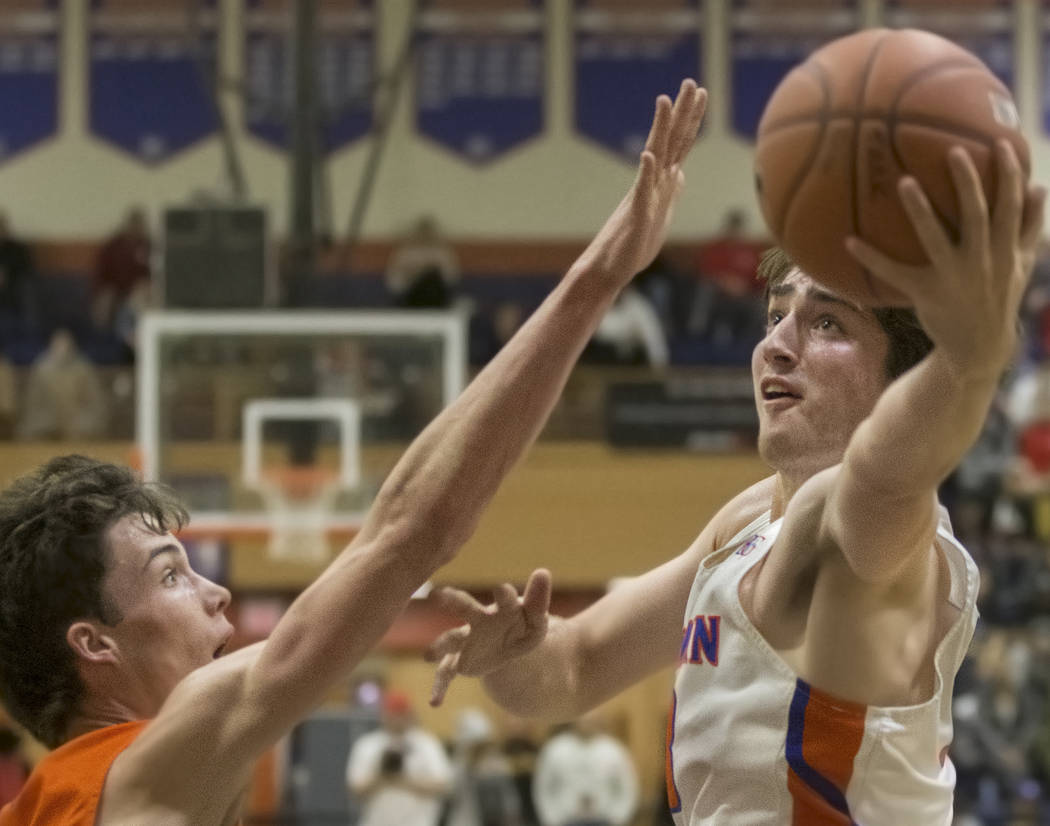 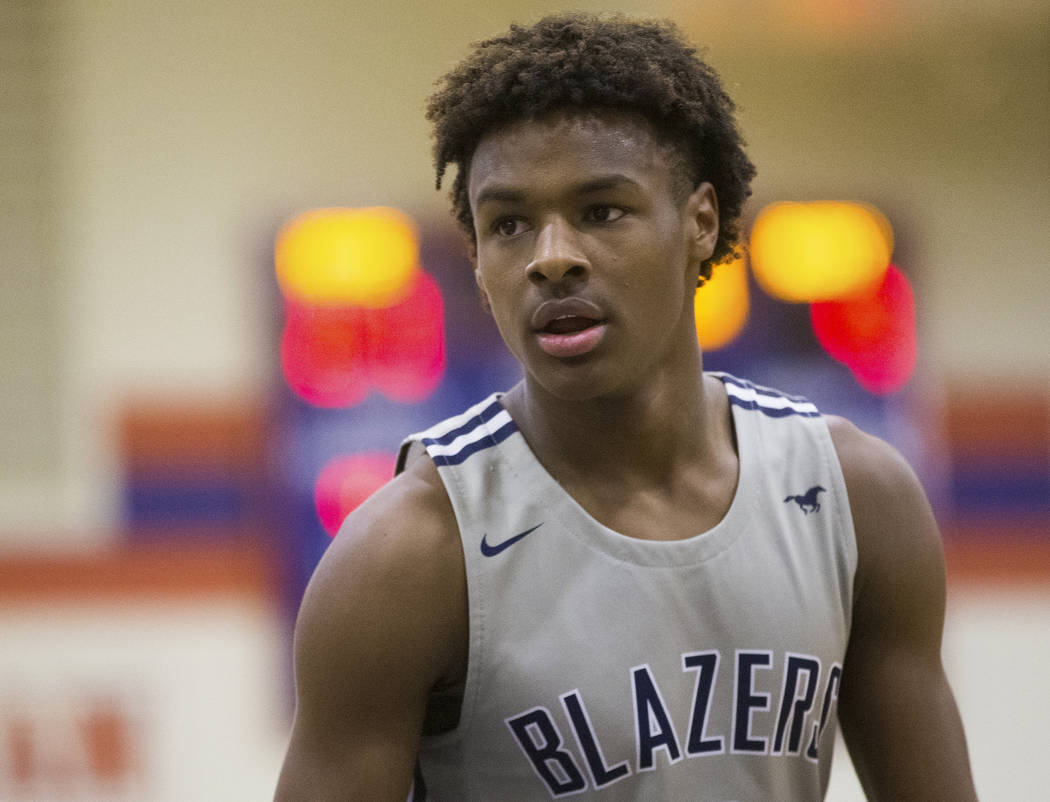 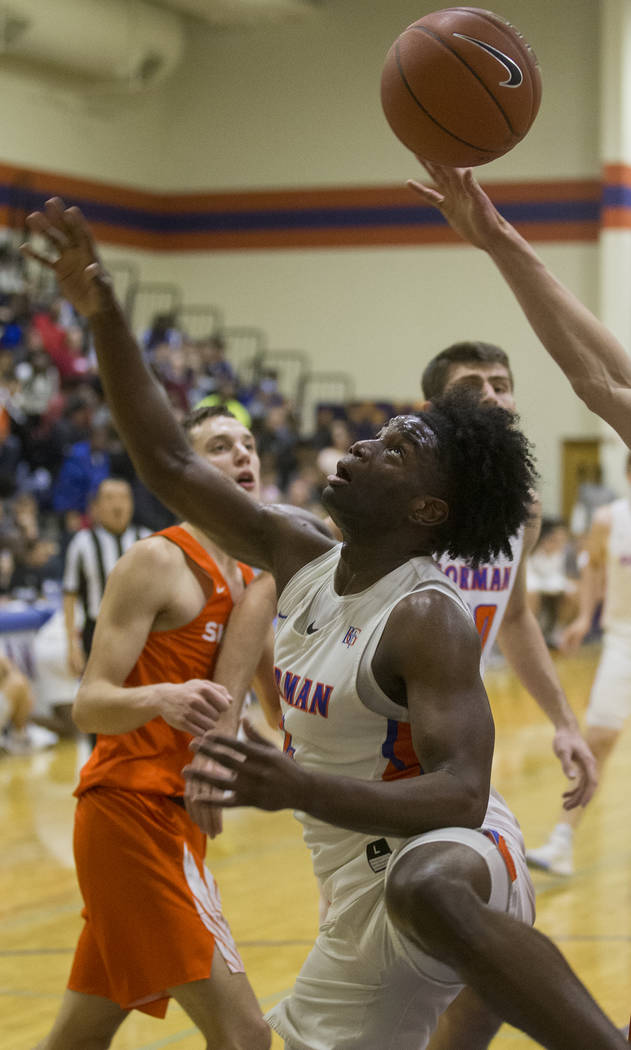 Bishop Gorman junior guard Jonathan Braggs (4) fight for a loose ball in the first half during the Gaels game with Skyridge at the Tarkanian Classic on Wednesday, Dec. 18, 2019, at Bishop Gorman High School, in Las Vegas. (Benjamin Hager/Las Vegas Review-Journal) @benjaminhphoto 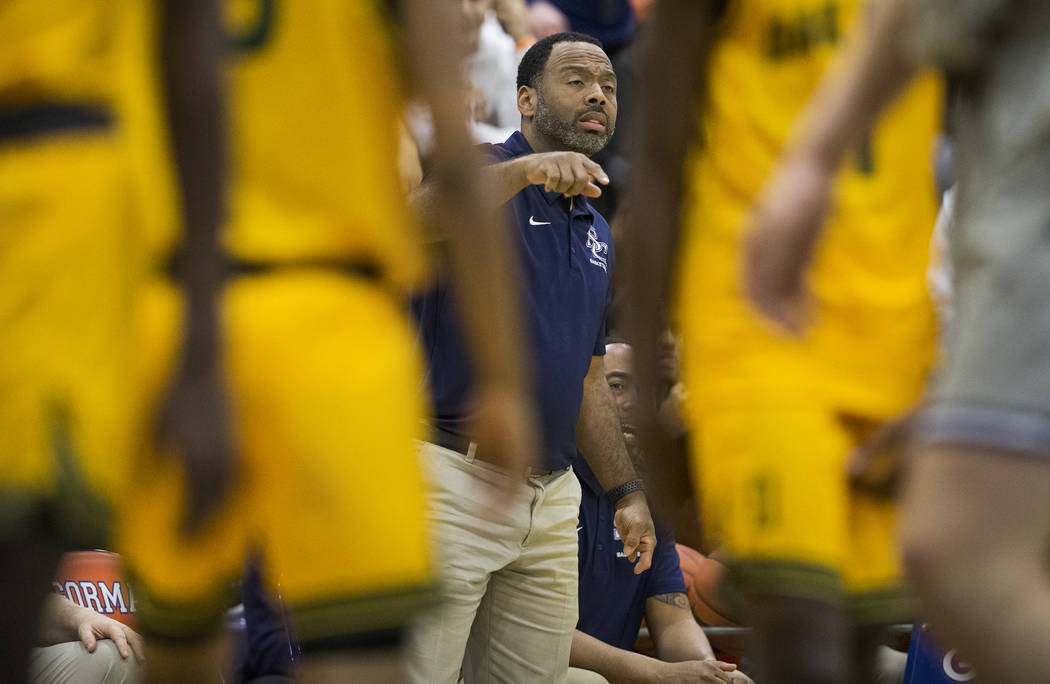 Sierra Canyon head coach Andre Chevalier coaches up his team in the second half during their game against Oak Ridge at the Tarkanian Classic on Wednesday, Dec. 18, 2019, at Bishop Gorman High School, in Las Vegas. (Benjamin Hager/Las Vegas Review-Journal) @benjaminhphoto 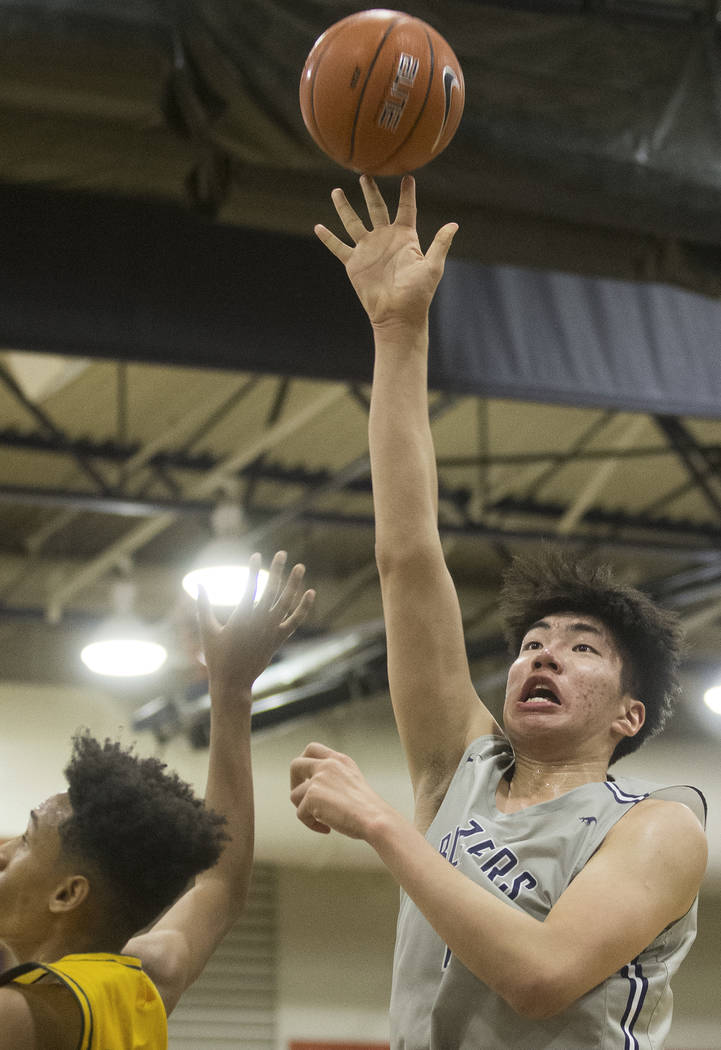 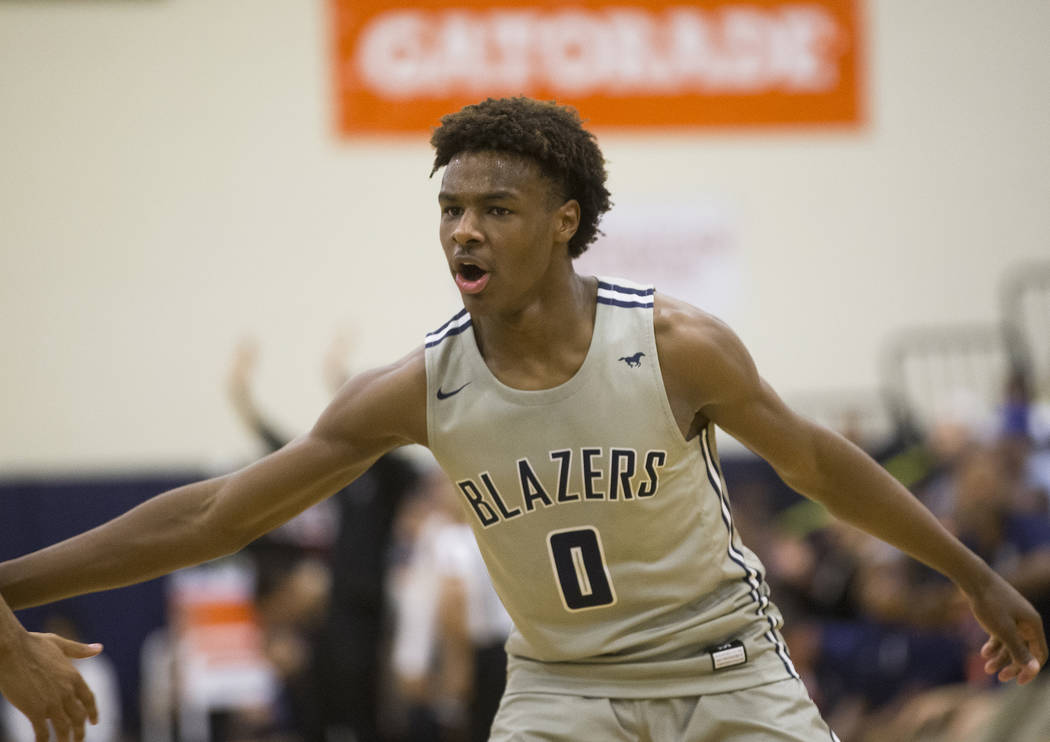 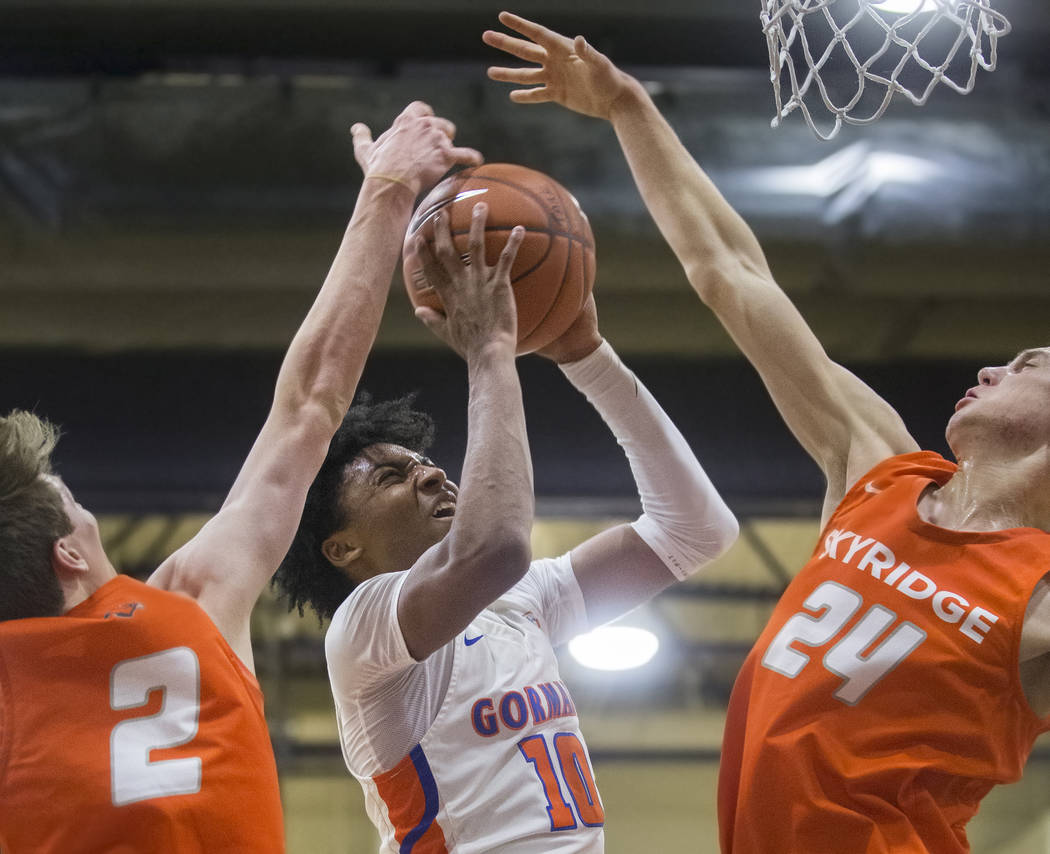 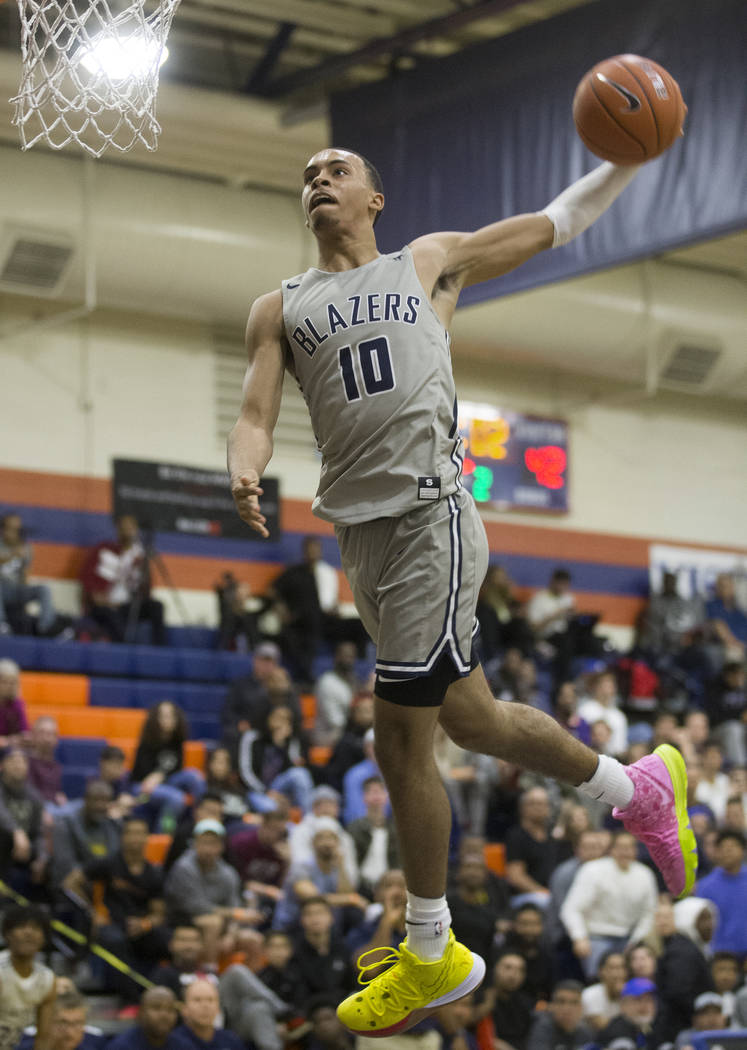 Sierra Canyon sophomore guard Amari Bailey (10) does break away windmill dunk in the second half during their game with Oak Ridge at the Tarkanian Classic on Wednesday, Dec. 18, 2019, at Bishop Gorman High School, in Las Vegas. (Benjamin Hager/Las Vegas Review-Journal) @benjaminhphoto

Bronny James sat on the bench at the end of Sierra Canyon’s win Wednesday night at the Tarkanian Classic at Bishop Gorman High School, laughing and dancing with teammates.

But there’s nothing typical about the attention the 6-foot-2-inch freshman guard receives. A camera crew films his every move, and crowds fill the bleachers — many wearing jerseys that adorn his last name — at gyms of all sizes.

Wherever the Trailblazers go, they garner plenty of attention. That comes with the territory when one of their players is the son of NBA superstar LeBron James.

“It’s a lot of fun,” said Frank, who has signed to play at Texas Christian next year. “Every kid in the country would love to have all the attention we have. All the cameras, all the fans, before the game, after the game, pictures, it’s a lot of fun.”

Sierra Canyon coach Andre Chevalier is used to his teams getting attention. Recent alumni from the school in Chatsworth, California, include Marvin Bagley III, who was the second pick in the NBA draft after a year at Duke and plays for the Sacramento Kings, and sons of former NBA stars Scottie Pippen and Kenyon Martin.

But Chevalier hasn’t seen anything like this year, when Bronny James joined the team along with Zaire Wade, the son of former NBA star Dwyane Wade. It can be overwhelming, but the players seem to enjoy it.

“I’m from the Boston area, and I had no media where I came from,” Sierra Canyon sophomore Shy Odom said. “This is all different. I’m really just embracing it.”

James, who is not allowed by his coaches to speak to the media, has seen his role increase with the Trailblazers, ranked No. 7 nationally by USA Today, since the beginning of the season. He has made his way into the starting lineup a few times, such as Thursday during a victory in the Tarkanian Classic that moved their record to 10-0 this season.

His best game was against his dad’s alma mater. He scored 15 points, including a steal and layup that put the game away against St. Vincent-St. Mary in front of 13,000 fans at Nationwide Arena in Columbus, Ohio.

“He’s advancing much more quickly than we thought,” Chevalier said. “He’s shooting the ball at a high level and attacking the rim now. That’s an addition to his game over the last two or three games, the floater. We’ve got to get him to start playing defense at a high level and understanding schemes. When he does that, he’s going to become special.”

He’s surrounded by players who already are special. Brandon Boston Jr. is a five-star recruit headed to Kentucky next year. Amari Bailey is ranked No. 6 in the nation by ESPN in the 2022 class. Several others have Division I offers, including James and Wade, who missed the Tarkanian Classic with a foot injury.

Bailey’s thunderous windmill dunk on a breakaway in Wednesday’s game was the highlight of the night, and Boston threw down three consecutive dunks as the Trailblazers pulled away from Northeast (Florida).

Bronny James got into the act Wednesday with a steal and layup between two defenders as part of a 13-point night. Then he accepted a quick celebratory low-five from a teammate and ran back on defense.