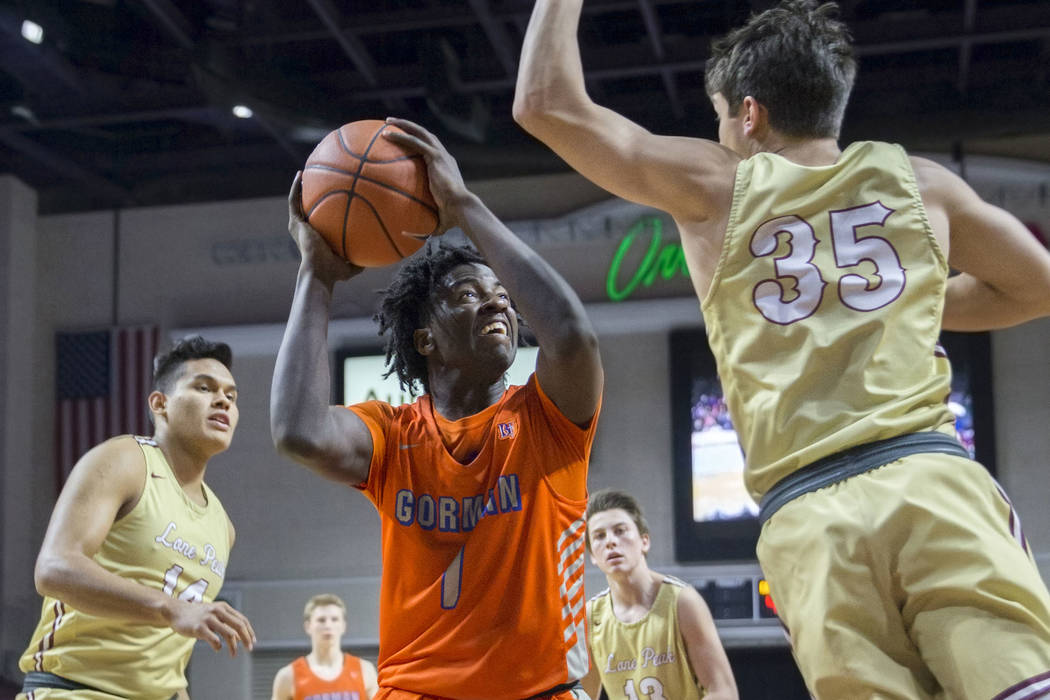 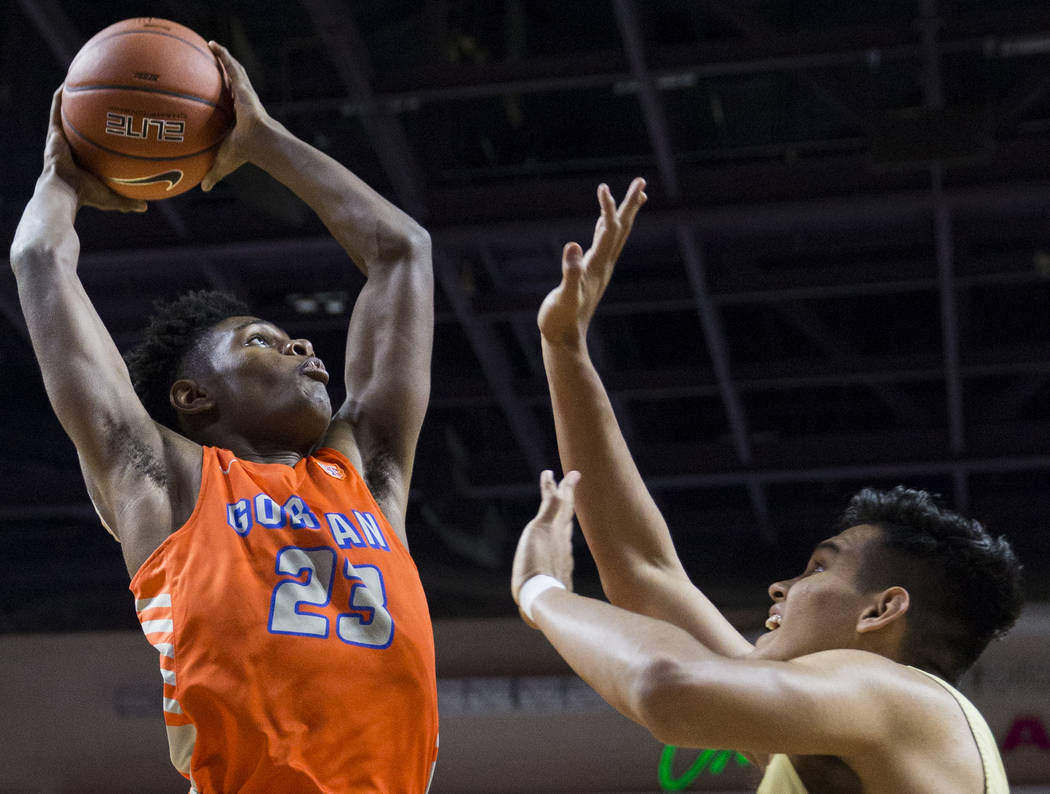 Bishop Gorman junior forward Mwani Wilkinson (23) elevates for a dunk over Lone Peak junior forward Daniel Suarez (14) in the second half during the Tarkanian Classic at the Orleans Arena on Wednesday, Dec. 19, 2018, in Las Vegas. Benjamin Hager Las Vegas Review-Journal 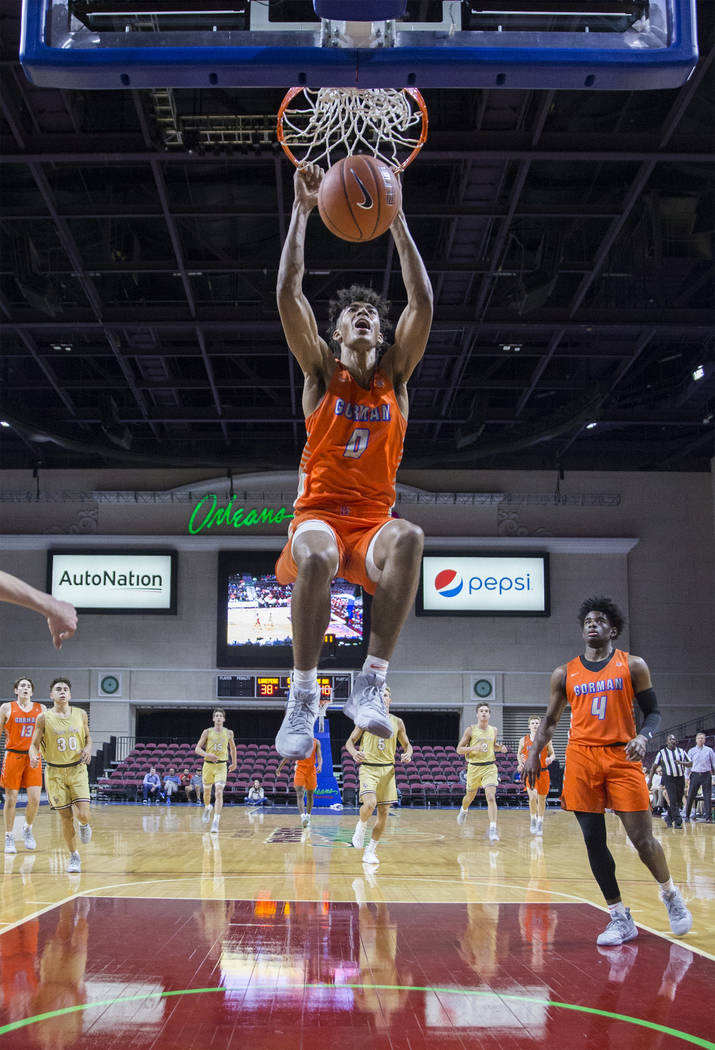 Bishop Gorman junior forward Isaiah Cottrell (0) converts a fast break dunk in the second half during the Gaels game with Lone Peak, Utah, during the Tarkanian Classic at the Orleans Arena on Wednesday, Dec. 19, 2018, in Las Vegas. Benjamin Hager Las Vegas Review-Journal 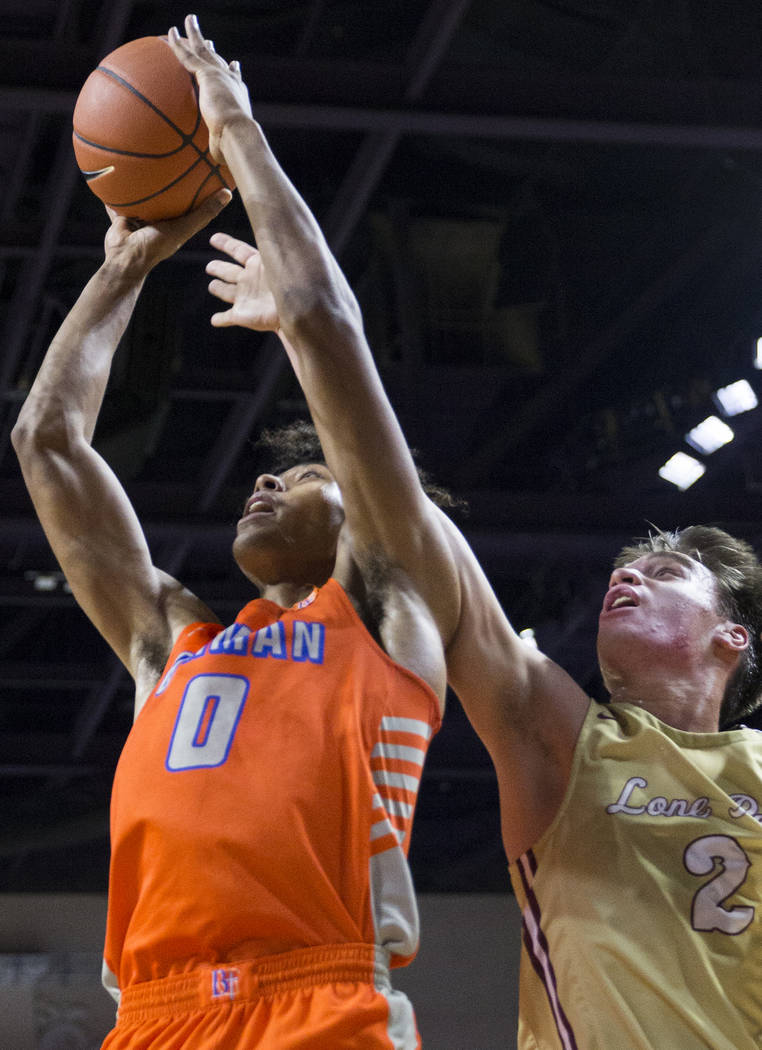 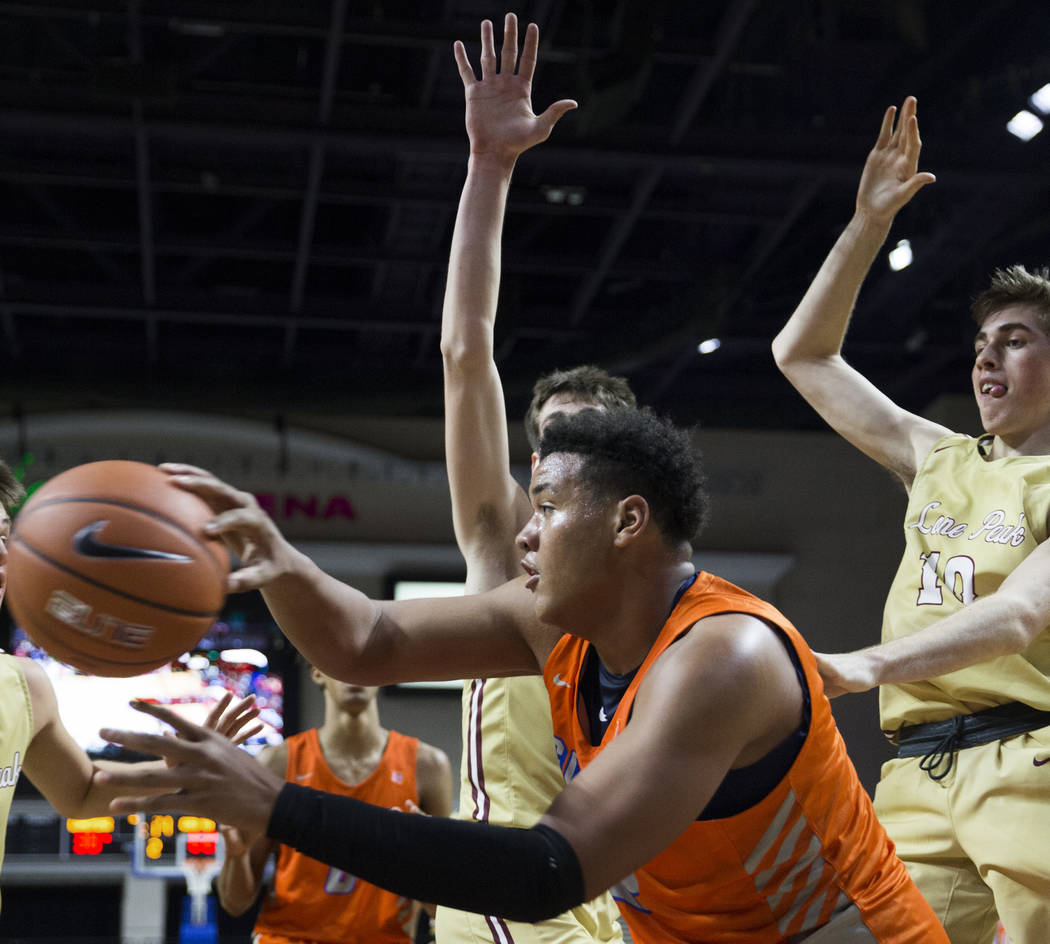 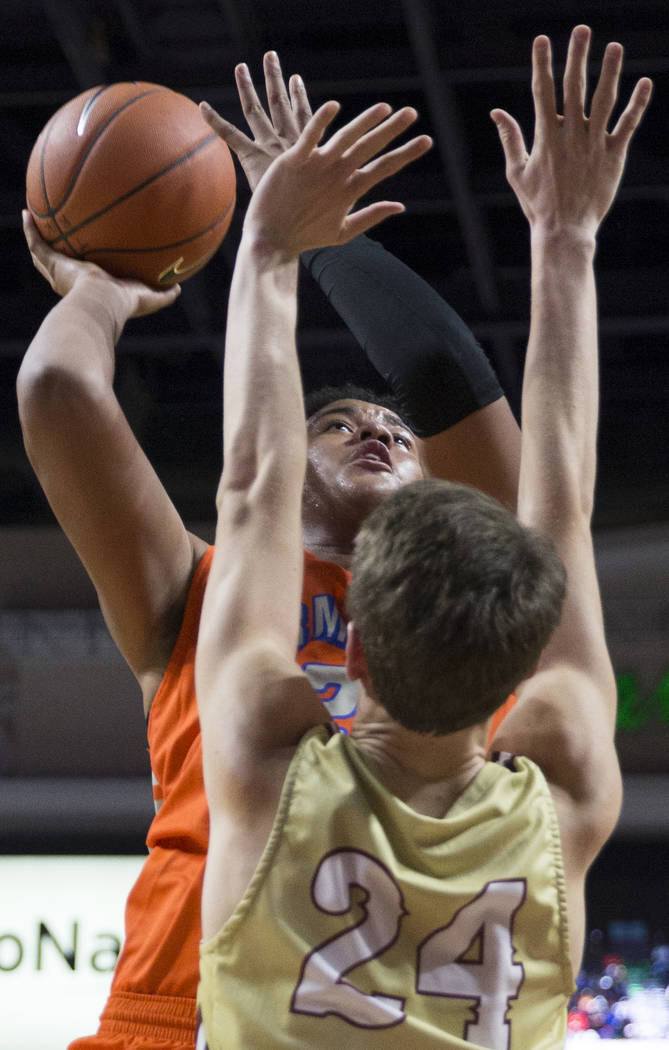 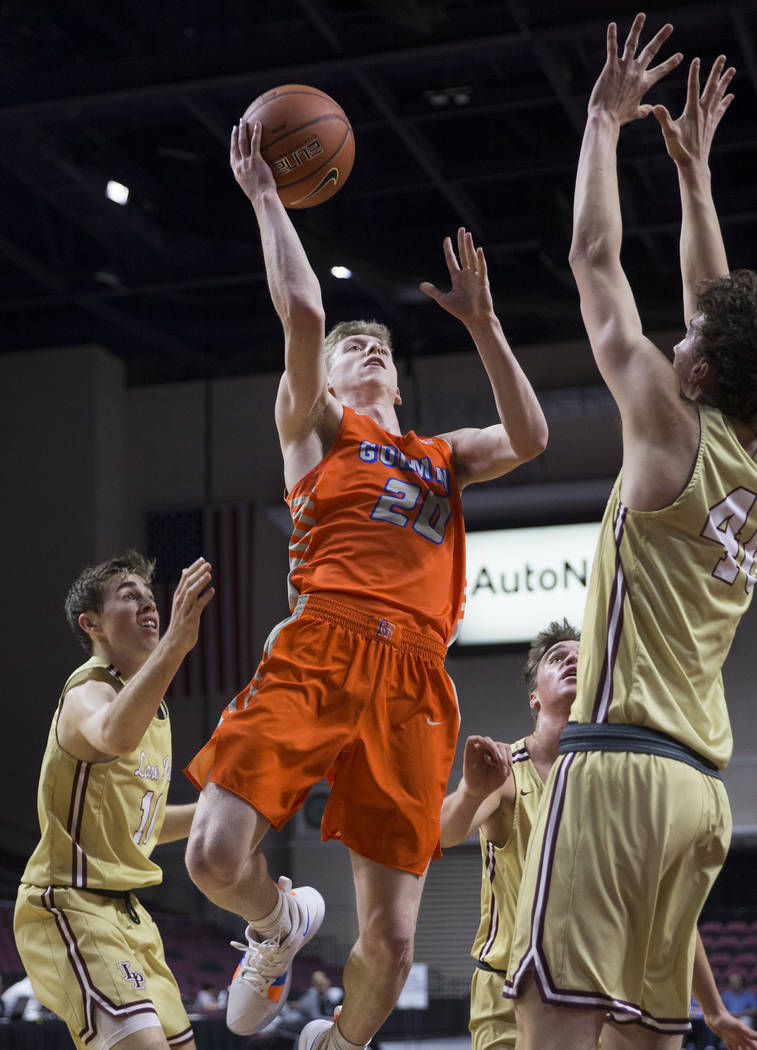 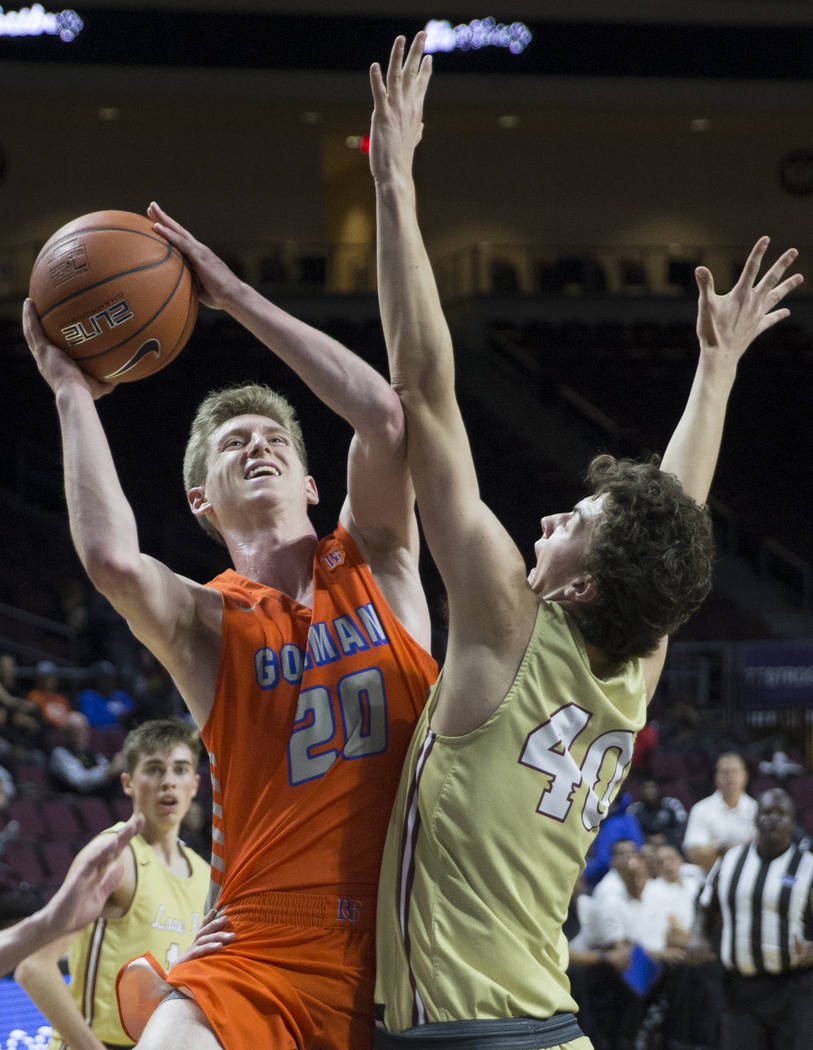 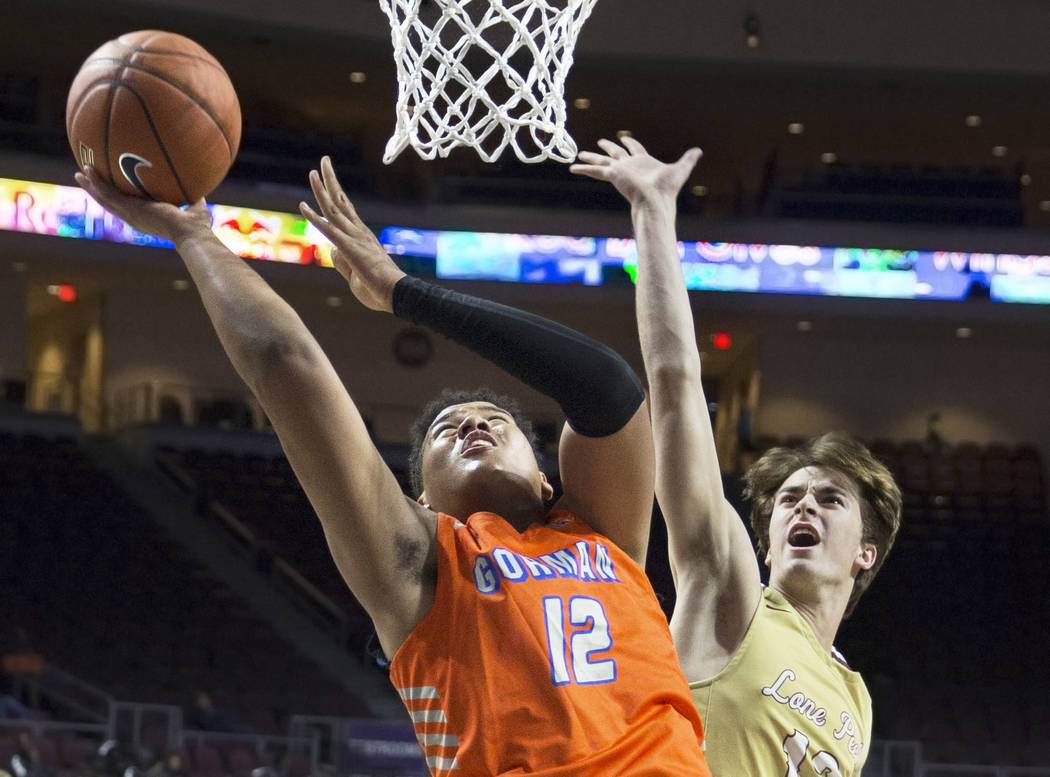 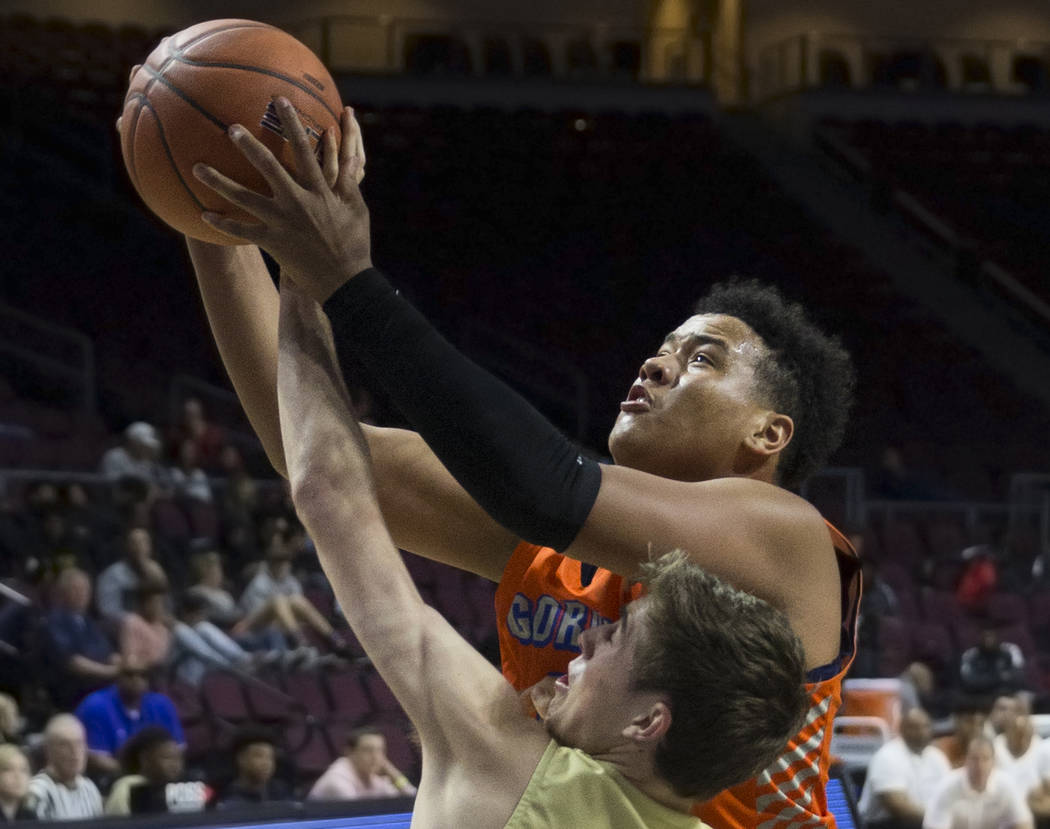 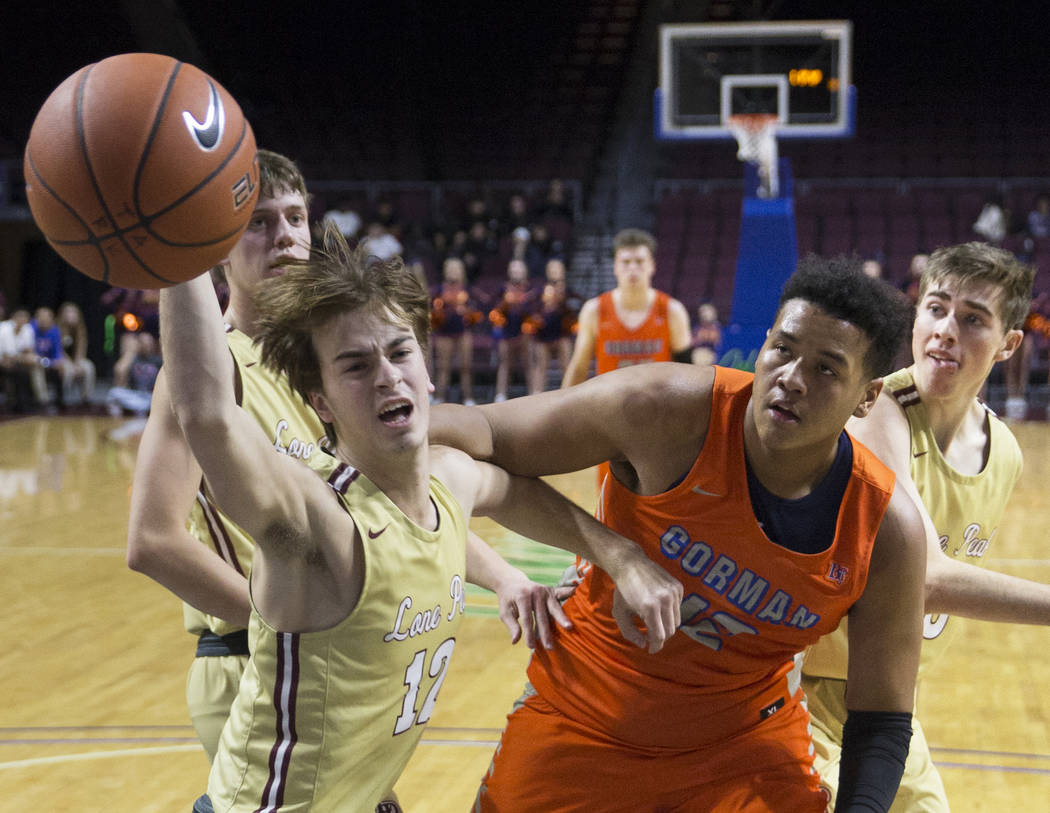 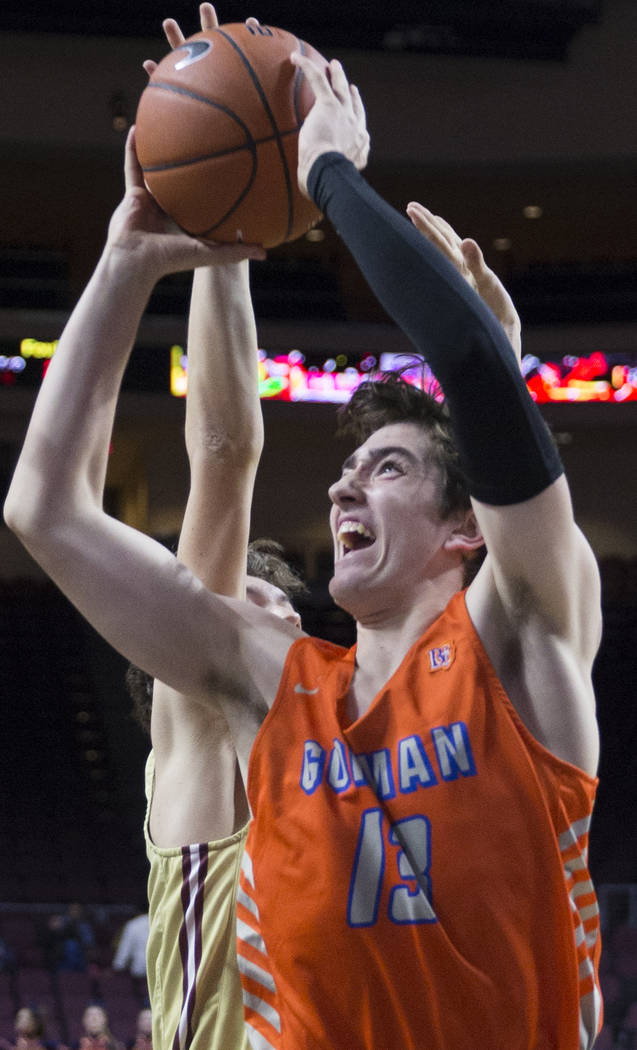 Bishop Gorman junior forward Braden Lamar (13) drives baseline in the first half during the Gaels game with Lone Peak, Utah, during the Tarkanian Classic at the Orleans Arena on Wednesday, Dec. 19, 2018, in Las Vegas. Benjamin Hager Las Vegas Review-Journal 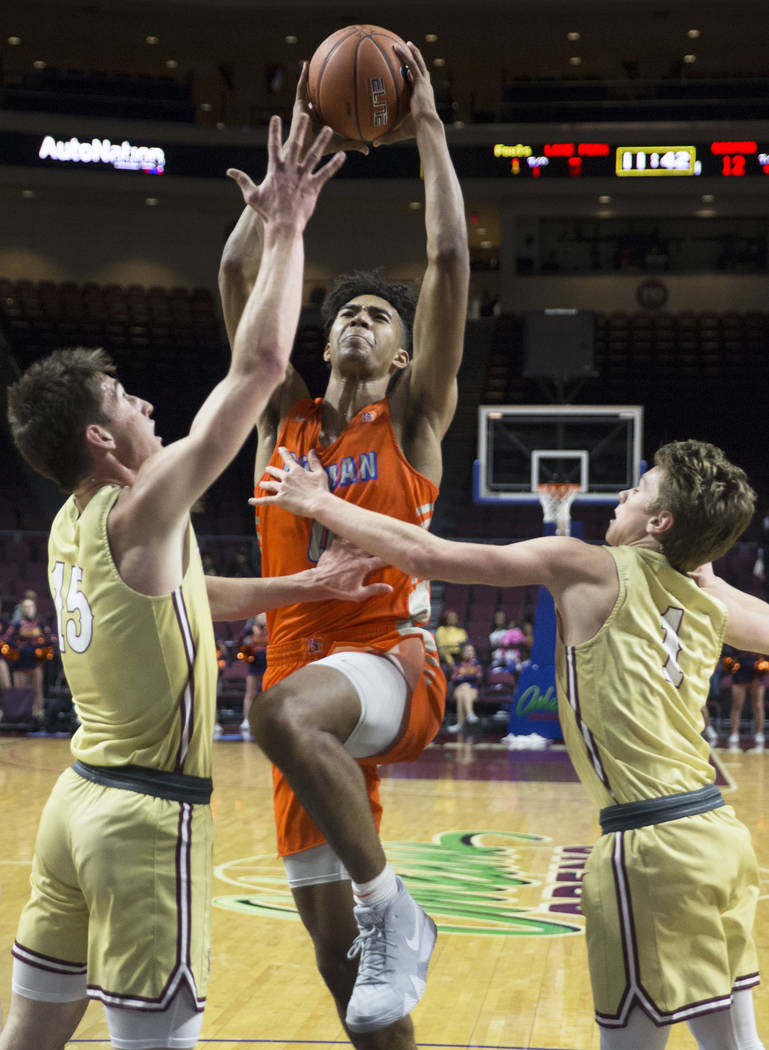 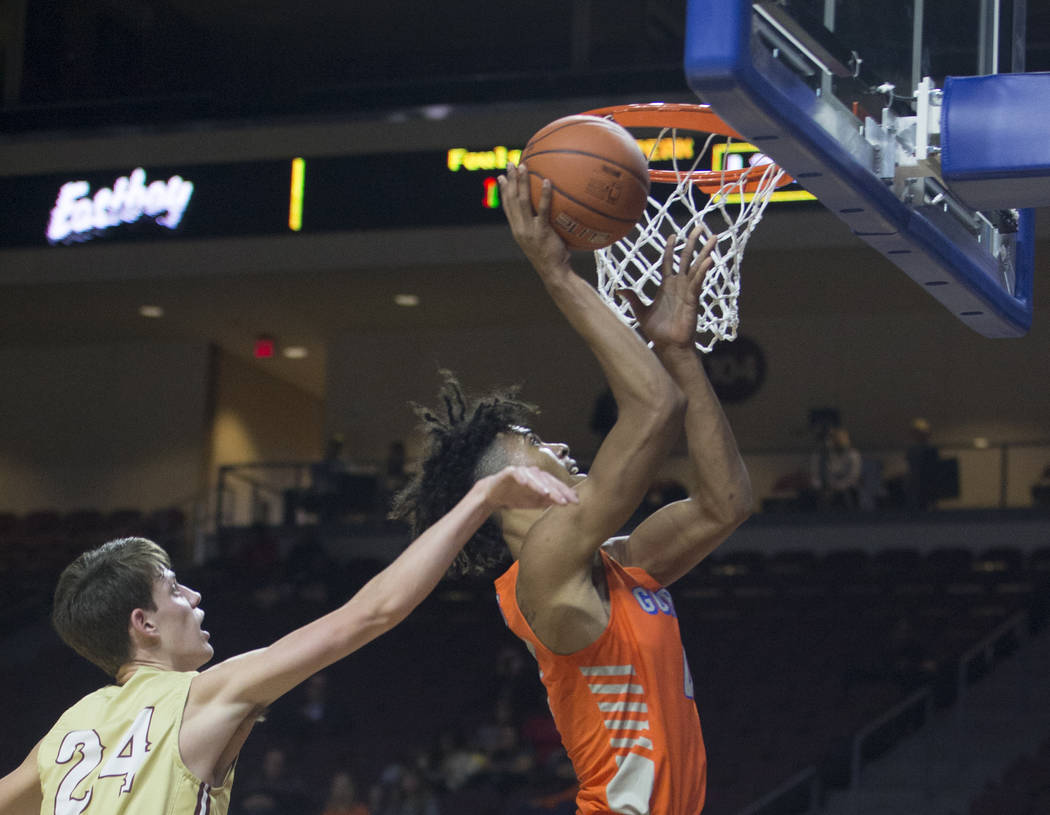 At others, he was on the brink of pulling out his hair.

The good far outweighed the bad, though, as the Gaels pulled away for a 79-48 win over Lone Peak (Utah) in their Tarkanian Classic opener at Orleans Arena.

“It is a lot of fun when things are going and you see those runs where we go on a 10-0 or a 12-2 run, and then we have those little lapses,” Rice said. “We’re a good team right now. To be a great team, we have to stop those momentum changes.”

The Gaels scored one point in the first 2:40 of the second half, but the constant of the night — defense — made sure the Knights wouldn’t again make a game of it.

Gorman used a 19-0 run during a near seven-minute stretch midway through the second half to put the game out of reach.

Gorman limited the Knights to 9 of 33 shooting in the second half and forced 18 turnovers overall.

“We just had energy, and we talked,” McClendon said. “They moved the ball, but when we rotate and we just talk, it’s easier.”

Grandview (Colo.) 69, Coronado 63 — At Orleans Arena, Lian Romero scored 20 of his 23 points in the second half to lift the Wolves past the Cougars in the Platinum Division.

Coronado’s Jalen Hardy scored 25 points before fouling out with 1:36 to play. Tyrell Hunt added 17 points and 10 rebounds, and Richard Isaacs scored 11 for Coronado.

Mayfair (Calif.) 71, Liberty 68 — At Orleans Arena, Josh Christopher scored 34 points to lead the Monsoons by the Patriots in the Nike Division.

Julian Strawther pumped in 48 points for Liberty. Strawther scored 20 points in the game’s first eight minutes and had 30 points at the half.

Faith Lutheran 69, San Bernardino (Calif.) 51 — At Faith Lutheran, Brevin Walter scored 19 of his 23 points in the second half to help the Crusaders down the Cardinals in the Eastbay Division.

Raymond Rosolino added 16 points, including 10 in the first half, for the Crusaders. Sedrick Hammond had 10 points, seven rebounds, two assists and two steals, and Azavier Johnson had six rebounds, five assists and three steals for Faith Lutheran.

Mojave 60, Spanish Fork (Utah) 59 — At Faith Lutheran, the Rattlers edged the Dons in overtime in the Orleans Division.

Chris Jackson scored 28 points, including four of the team’s seven overtime points. Jackson had 18 points in the second half as Mojave rallied from a 28-19 halftime deficit to force overtime.

Shadow Ridge 70, Juneau-Douglas (Alaska) 53 — At Faith Lutheran, Garin MacFarlane scored 17 points to help the Mustangs to the win in the Orleans Division.

Quinshon McGee added 14 points, and Jacob Schilder hit four 3-pointers for 12 points for Shadow Ridge, which led 44-29 at the half.

Mars Area (Pa.) 75, Palo Verde 64 — At Faith Lutheran, Michael Carmody had 23 points as the Fightin’ Planets rallied to beat the Panthers in the Eastbay Division.

Drew Warnick had 14 points to lead Palo Verde, which led 35-29 at the half. Kade Madsen added 13 points for Palo Verde.

Damion Bonty led three Cheyenne players in double figures with 20 points, 14 in the first half.

Glenn Taylor added 17 points, and J.D. McCormick scored 13 for the Desert Shields, who were 15-for-15 from the free-throw line.

Layton Christian (Utah) 62, Western 45 — At Faith Lutheran, Micah Petty scored 15 points to lead the Eagles over the Warriors in the Orleans Division.

Ambridge (Pa.) 56, Del Sol 50 — At Faith Lutheran, Ante Cvitovic had 15 points, and Liam Buck scored 14 to lead the Bridgers over the Dragons in the Orleans Division.

Del Sol’s Tyrell Hampton led all scorers with 19 points. Nati Asfaw scored 10 for Del Sol, which trailed 33-30 at the half.

Lee (Ala.) 64, Las Vegas 35 — At Faith Lutheran, Kobe Brown had 17 points as the Generals rolled past the Wildcats in the Eastbay Division.

Sunnyside (Calif.) 67, Green Valley 59 — At Faith Lutheran, Elijah Mouanoutoua scored all 18 of his points in the first half to help the Wildcats beat the Gators in the Eastbay Division.

Cedric Ayers added 16 points, including eight in the final 4:34, for Sunnyside.

Antoine Hines scored 13 of his 19 points in the second half to lead Green Valley. Kaden Jackson added 15 points for the Gators, who cut the lead to five points in the final five minutes but could get no closer.

Trinity Christian (Texas) 80, Durango 76 — At Desert Oasis, Isaiah Range scored 23 of his 34 points in the second half to lead Trinity Christian to a come-from-behind victory over the Trailblazers in the Gatorade Division.

Tyreek Smith chipped in 18 points for the Tigers, who trailed Durango 38-37 at the half.

Timpview (Utah) 69, Silverado 57 — At Desert Oasis, Nate Hansen drained five 3-pointers and shot 12 of 13 from the free-throw line en route to 43 points to lead the Thunderbirds past the Skyhawks in the Gatorade Division.

Kelson Jensen chipped in with 14 points for Timpview.

Martell Williams had 25 points, and Daryl Finley scored 10 for Silverado.

Darius Mason and Javon Jones each had 15 points, and Lafayette Sanders scored 10 for Pasadena.

Bonanza 53, North Eugene (Ore.) 48 — At Heinrich YMCA, Trent Savage went 4-for-4 from the free-throw line in the closing seconds to ice the Bengals’ win over the Highlanders in the Orleans Division.

Foothill 72, Central (Calif.) 58 — At Heinrich YMCA, Jace Roquemore and Dylan Hushaw each scored 16 points to lead the Falcons past Central in the Gatorade Division.

Sheldon Clark (Ky.) 55, Valley 44 — At Heinrich YMCA, Trey James scored 13 of his 21 points in the second half to guide the Cardinals by the Vikings in the Orleans Division.

Payson (Utah) 89, Basic 63 — At Heinrich YMCA, Logan Sorensen scored 21 points and hit three of Payson’s 15 3-pointers in a win over the Wolves in the Orleans Division.

Connor Bateman and Samuel Mitchell each added 16 points for Payson.