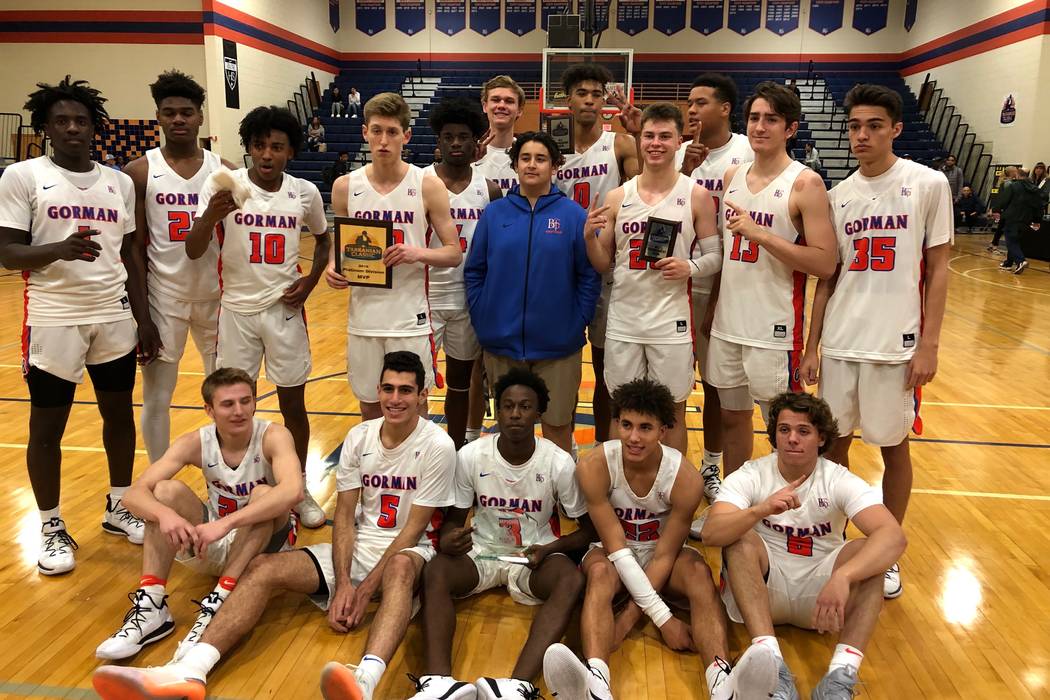 The Tarkanian Classic championship banner that adorns the gymnasium wall inside Bishop Gorman probably will stay in the same spot until next year.

Because the Gaels are Platinum Division champions for the second consecutive season.

Gorman jumped on Rancho Christian (California) early in the title game Saturday night and coasted to a 61-39 victory for the tournament title. Isaiah Cottrell and Noah Taitz scored 16 points apiece to lead the Gaels, and point guard Zaon Collins anchored a tenacious defensive effort on the perimeter.

Taitz and Collins shared the tournament’s MVP award, and Gaels coach Grant Rice was delighted with the outcome.

For the second consecutive season.

“The tournament went really well. The talent level is increasing,” Rice said. “We had tons of college coaches, scouting services. It was a great week of basketball in Las Vegas.”

The five-day Tarkanian Classic again featured some of the nation’s best players and teams, including the Gaels and Eagles, who both won Wednesday, Thursday and Friday to clinch their berths in the final.

Collins and company hounded Rancho Christian’s guards and double-teamed five-star forwards Evan and Isaiah Mobley, who finished with 16 and 13 points, respectively. And the Gaels engineered a 32-20 halftime lead behind 11 points from Taitz.

“The defense, the way we played defense, I think we frustrated them tonight,” Rice said.

The Gaels nursed a double-figure lead the entire second half and spread the floor to create driving lanes for their guards and dump-off opportunities for Cottrell. They set the tone and slowed the tempo.

And won the tournament.

“It’s crazy, but we expected it,” Cottrell said. “We worked really hard over the whole summer. We were ready for it.”

Mojave 58, Payson (Utah) 57 — At Gorman, A.J. Woods had a game-high 25 points to help the Rattlers claim the Orleans Division championship with a win over the Lions.

Timpview (Utah) 86, Foothill 74 — At Gorman, Nate Hansen made nine 3-pointers and finished with 44 points to lead the Thunderbirds past the Falcons in the Gatorade Division championship.

Kelson Jensen added 18 points for Timpview, which made 15 3-pointers.

Bonanza 78, Shadow Ridge 68 — At Gorman, Kendell Burrell had a game-high 18 points to help the Bengals knock off the Mustangs in the Orleans Division.

Trayvon Davis had 22 points for San Bernardino, which had only three players score.

Centennial 85, Silverado 70 — At Desert Oasis, Savio Rivera hit seven 3-pointers and scored 30 points to lead the Bulldogs over the Skyhawks.

Jairus Dickson added 21 points, and Austin Anderson scored 13 for Centennial, which was 16-for-20 from the free-throw line in the second half.

Martell Williams led Silverado with 24 points, and teammate Trevon Martin had 18 of his 20 points in the second half.

Noah Sherrard hit five 3-pointers for 15 points for the Skyhawks.

Faith Lutheran 66, Sunnyside (Calif.) 41 — At Faith Lutheran, Sedrick Hammond scored 15 of his 22 points in the second half as the Crusaders beat the Wildcats.

Hammond hit three 3-pointers in the second half for Faith Lutheran, which led 25-23 at the half.

Cedric Ayers had 22 points for Sunnyside.

Jason Condron hit four 3-pointers and had 16 points for Palo Verde, which led 19-15 at the half.

Del Sol 57, Edge School (Canada) 43 — At Faith Lutheran, Nati Asfaw had 17 points to lead the Dragons to the victory.

Tyrell Hampton scored eight of his 12 points in the first half for Del Sol, which led 31-18 at the half.

Cheyenne 69, C.I. Gibson (Bahamas) 65 — At Faith Lutheran, Tommie Lindsey scored 22 points as the Desert Shields held on for the victory.

Jordan’s Dyson Koehler, who had 30 points and 10 rebounds, was whistled for his fifth foul with 25.3 seconds to play, and the Beetdiggers were assessed a technical for not substituting in a timely manner as they argued the number of fouls on Koehler. Yap hit all four free throws to seal the win.

LaVario Jackson led five double-figure scorers with 15 points for Legacy. Andrew Garcia added 13 points, and Rayshon Funches and Emmanuel Austin each scored 12 for Legacy, which got 11 points from Shamir Chambers.

Lincoln (Colo.) 62, Desert Oasis 56 — At Desert Oasis, James Felton had 20 points and 14 rebounds as the Lancers held off the Diamondbacks.

Dominique Ford had 19 points to lead Desert Oasis, which rallied to take a 52-50 lead on two free throws by Nate Van with 3:33 to play.

Felton scored to tie the game, and Foster hit a 3-pointer with 2:47 left to give Lincoln the lead for good.

Spanish Fork (Utah) 67, Basic 49 — At Desert Oasis, Brandon Congdon had 19 points to lead the Dons over the Wolves.

Tanner Olsen added 17 points, and Remington Newell scored 12 for Spanish Fork, which led 33-19 at the half.

Jahlani Blair led Spring Valley with 20 points and 10 rebounds. James Webster added 16 points and eight rebounds, and Amari James had 15 points and five assists for the Grizzlies, who got 14 points from Michael Martin.

Noah Quinton added 14 points for North Eugene, which outscored Western 39-28 in the second half.

Gawain Powell led Western with 19 points, and Trayvon Albert scored 10 for the Warriors.

Juneau-Douglas (Alaska) 61, Valley 52 — At Faith Lutheran, Krishant Samtani had 16 points to lead the Crimson Bears over the Vikings.

Cooper Kriegmont added 13 points for Juneau-Douglas, which led 33-21 at the half.

Andre Jones had 14 points, and Bryce Jones scored 12 for Valley.