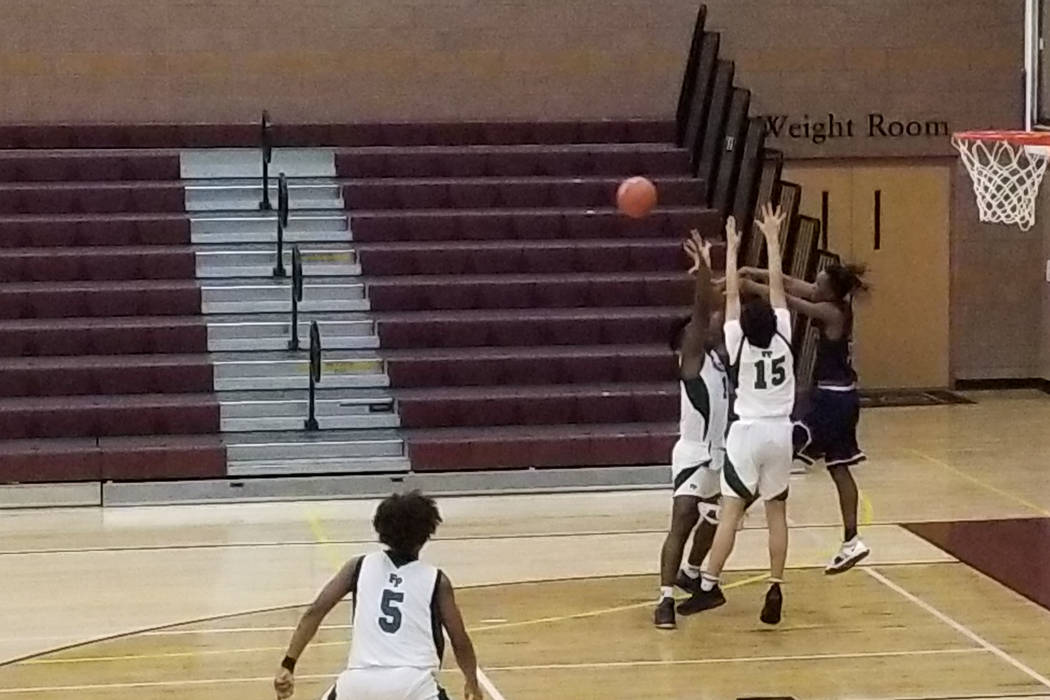 Legacy guard Rayshon Funches passes out of a trap against Fairmont (California) during the Tarkanian Classic at Faith Lutheran on Thursday, Dec. 20, 2018. Legacy held on for a 68-66 win. (Damon Seiters/Las Vegas Review-Journal)

It took Legacy’s boys basketball team a little time to get comfortable on Thursday. Then guards Rayshon Funches and Emmanuel Austin took over.

Funches and Austin combined to score 22 points in the final 10 minutes as the Longhorns held on for a 68-66 win over Fairmont (California) in the Tarkanian Classic’s Eastbay Division at Faith Lutheran.

“We knew that the middle would be open, so we figured they would be able to attack and at least get into the middle of the floor,” Legacy coach Jack Tarango said. “And that’s part of their game. They do a great job of slicing through the middle and are able to get shots.”

Funches drove and dished off to Zyuan Lee for a bucket with 5:39 to play to give Legacy a 47-46 lead, and the Longhorns wouldn’t trail again.

Austin, who had a team-high 18 points, then scored nine of the team’s next 11 points as Legacy extended its lead to 56-48.

Fairmont made a run, attacking the basket and getting to the free-throw line down the stretch to make things interesting. But the Longhorns made 8 of 11 free throws in the final 1:10 to hang on.

“We were fouling and were stopping the clock multiple times, and we made it a little more difficult on ourselves,” Tarango said. “But we hit big free throws when it counted and were able to get out of there with the win.”

Funches scored all 10 of his points in the final 10 minutes, and Shamir Chambers hit five 3-pointers and scored 17 points for Legacy.

Isaiah Cottrell added 16 points, and Will McClendon scored 15 for Gorman, which got 13 points from Noah Taitz.

Coronado 90, Constitution (Pa.) 65 — At Gorman, Jaden Hardy had 27 points and 10 rebounds to lead the Cougars past the Generals in the Platinum Division.

Liberty 58, Washington (Wis.) 53 — At Bishop Gorman, Julian Strawther scored 34 points to lead the Patriots past the Purgolders in the Nike Division.

Foothill 73, Desert Pines 70 — At Coronado, Dylan Hushaw scored 17 of his 25 points in the second half and pulled down six rebounds to lead the Falcons past the Jaguars in a Gatorade Division quarterfinal.

Jace Roquemore had 22 points, eight rebounds and five assists, and Caleb Stearman added 10 points for the Falcons, who overcame a furious second-half rally by the Jaguars.

Milos Uzan had 16 points and four assists for the Jaguars.

Semaj Threats and Cimarron Conriquez each scored 13 points for Desert Pines, and teammate Darnell Washington scored 12 points — all in the second half — and pulled down a game-high 10 rebounds.

Findlay Prep 72, Trinity 64 — At Gorman, Taryn Todd scored 19 points to help the Pilots advance to the National Division final with a win over the Thunder.

Bonanza 59, Bingham (Utah) 46 — At Heinrich YMCA, Kendell Burrell drained six 3-pointers and had 26 points to lead the Bengals past the Miners in the Orleans Division.

Damion Bonty added 12 points, and De’Kquante Hayes scored 10 for Cheyenne, which raced to a 37-19 halftime lead.

Lee (Ala.) 69, Faith Lutheran 50 — At Faith Lutheran, the Generals made 17 of 21 shots (81 percent) in the second half to pull away from the Crusaders in the Eastbay Division quarterfinals.

Shadow Ridge 91, Layton Christian (Utah) 87 — At Desert Oasis, Erin Chamble scored 19 points to help the Mustangs battle back from a 22-point first-half deficit to nip the Eagles in overtime in the Orleans Division.

Quinshon McGee and Garin MacFarlane each scored 17 points, and Aiden Hurley had 15 points for Shadow Ridge, which got 11 points from Jacob Schilder.

Mojave 81, Ambridge (Pa.) 63 — At Desert Oasis, Chris Jackson had 20 points to lead the Rattlers past the Bridgers in the Orleans Division.

Desert Oasis 71, Cape Coral (Fla.) 46 — At Desert Oasis, Nate Van hit five 3-pointers and had 23 points to lead the Diamondbacks past the Seahawks in the Select Division.

Dominique Ford added 17 points for Desert Oasis, which led 31-21 at the half.

Democracy Prep 58, Maranatha (Calif.) 50 — At Heinrich YMCA, Daniel Plumer had 22 points and 14 rebounds to lead the Blue Knights by the Minutemen in the Select Division.

Centennial 84, Valor Christian (Colo.) 77 — At Coronado, Jarius Dickson scored 23 points to lead the Bulldogs past the Eagles in the Gatorade Division.

Silverado 95, Leuzinger (Calif.) 73 — At Coronado, Trevon Martin scored 25 points to lead the Skyhawks past the Olympians in the Gatorade Division.

Daryl Finley and Myles Daniels each added 11 points for Silverado.

Arbor View 91, Durango 76 — At Coronado, Donovan Yap scored 25 points to lead the Aggies past the Trailblazers in the Gatorade Division.

Favor Chukwukelu scored 16 points, and Larry Holmes added 15 points for the Aggies, who led 47-35 at halftime.

Basic 53, Valley 52 — At Faith Lutheran, Joseph Ramirez had 17 points to lead three Wolves in double figures as they edged the Vikings in the consolation bracket of the Eastbay Divison.

Andre Jones scored all 14 of his points in the second half to lead Valley.

Salem Hills (Utah) 77, Palo Verde 66 — At Faith Lutheran, David Jones poured in 26 points to lead the Skyhawks over the Panthers in the consolation bracket of the Eastbay Division.

Western 49, Juneau-Douglas (Alaska) 47 — At Faith Lutheran, Keanu McGee scored nine of his 16 points in the second half as the Warriors nipped the Crimson Bears in the Orleans Division consolation bracket.

Gawain Powell added 13 points, including eight in the second half for Western.

Spanish Fork (Utah) 52, Del Sol 50 — At Faith Lutheran, Hunter Nielson hit a 3-pointer from the left corner with 1:24 to play to give the Dons the lead for good in the Orleans Division’s consolation bracket.

Nielson’s third 3-pointer of the second half gave Spanish Fork a 51-50 lead. He finished with 16 points.

Remington Newell had 18 points and six rebounds to lead the Dons. 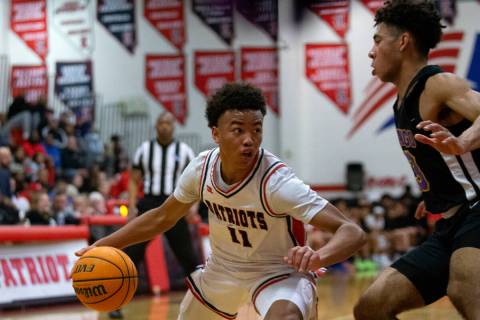