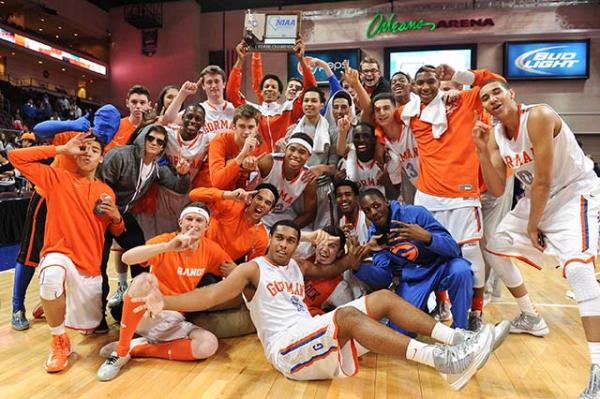 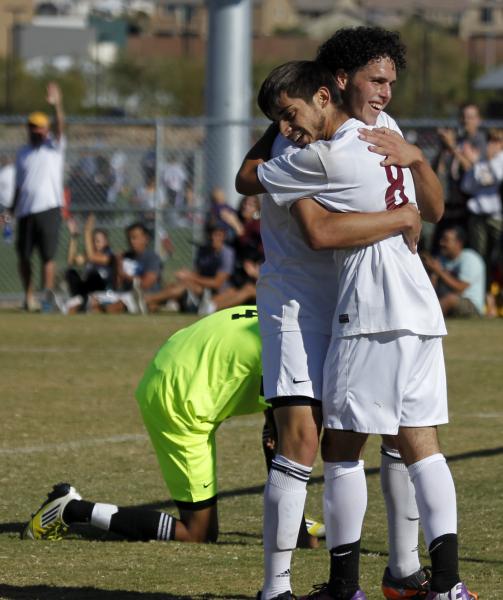 Eldorado’s Chris Perez (8) and Andres Lua embrace after teaming for a second-half goal during their Sunrise Region championship soccer game. The Sundevils went on to win the 2013 state championship. 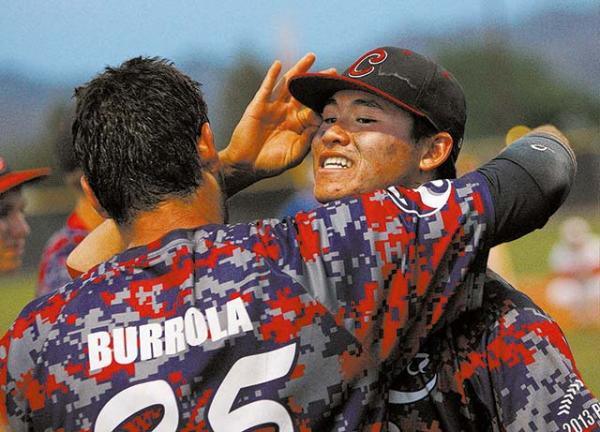 Coronado’s Julian Burrola, left, hugs Chandler Blanchard after the Cougars beat Bishop Gorman 7-4 to win the Division I state title on Saturday. Blanchard had three home runs and pitched a complete game in the final. 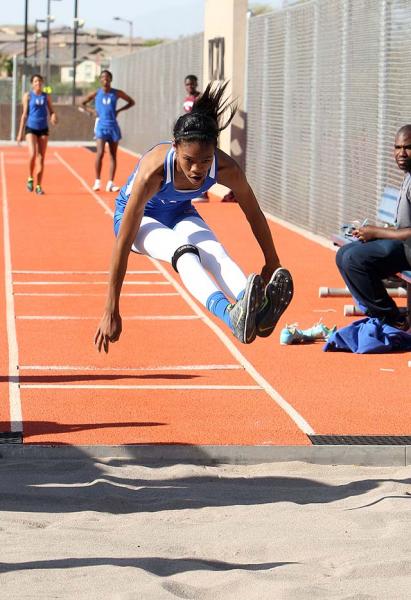 Bishop Gorman High School’s Vashti Cunningham competes in the long jump. Cunningham and her older brother Randall both had banner seasons in track. 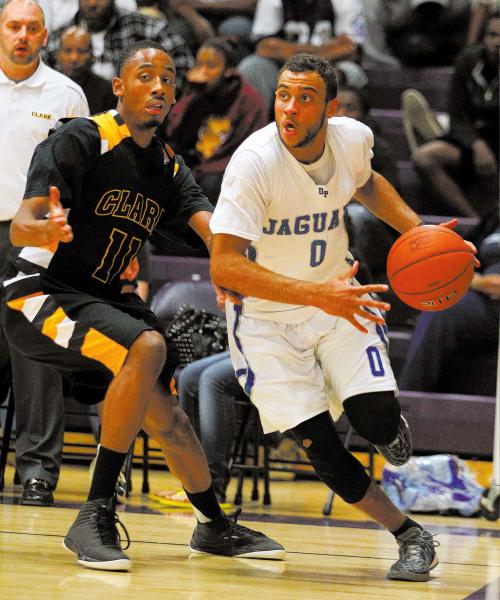 The end of the year brings plenty of celebrations. But it’s unlikely that any of those parties will match the pure, unadulterated joy that high school sports titles bring.

Just ask Coronado graduate Chandler Blanchard. Blanchard was all smiles in May after he emerged from a postgame dogpile. Blanchard blasted three home runs and pitched a complete game to lead the Cougars to a 7-4 win over Bishop Gorman, ending the Gaels’ streak of seven consecutive state baseball titles.

Blanchard’s monster performance was one of many this year, and his team’s title wasn’t the only impressive one.

Here’s a look back at some of the top high school sports moments of 2013.

But the real drama came a night later when Desert Pines and Clark squared off for the Division I-A boys crown.

Clark led by as many as 17 points before Julian Jacobs and the Jaguars rallied for a 59-57 win and the school’s first state basketball title.

The spring brought fantastic individual performances, especially on the track. Gorman’s Randall Cunningham posted the nation’s top high jump mark, clearing 7 feet, 3¼ inches to claim the Division I boys title. His sister, Vashti, cleared 5-8 to win the girls crown and was among the top jumpers in the nation with a season-best mark of 6-0¼.

Liberty’s Ashlie Blake proved to be one of the nation’s elite throwers with a mark of 51-3½ in the shot put. Like the Cunninghams, Blake will be back to try to top those marks in the spring.

Centennial softball standout Savannah Horvath had a huge season, hitting .585 with 17 home runs and 87 RBIs. She was a big part of the reason the Bulldogs became the first large-school team from Southern Nevada to win back-to-back crowns.

Centennial’s boys cross country team also ended a drought for Southern Nevada when the Bulldogs became the first large-school team from the area to capture a state title when the meet was held in the North since 1987.

Eldorado boys soccer coach Gerald Pentsil got his first state crown after 25 years as coach when the Sundevils beat Palo Verde 2-0 on Nov. 16. That same day, one of Pentsil’s former players, Josh Jones, coached Tech to the Division I-A crown with a 4-1 win over Sunrise Mountain.

The football season could have been dubbed “The Year of the Nine.” Liberty quarterback Tyler Newman matched a state record with nine touchdown passes against Del Sol on Oct. 11.

For those of you who couldn’t figure it out, yes, those plays tied national records.

Gorman rolled to a 48-14 victory over Reed for the Division I state crown. No, that wasn’t the ninth straight title for the Gaels; it just felt that way.

Actually, it was the school’s fifth straight, as the Gaels became the first large school to win five in a row since Reno did it from 1924 to 1928.

And for those who think Gorman’s streak is impressive, consider Pahranagat Valley’s feat. The Panthers won their sixth consecutive eight-man state football title, and the Panthers ran their winning streak to 69 games, the nation’s longest such streak.

What will 2014 bring? Chances are, plenty more dogpiles, celebrations and fantastic performances.