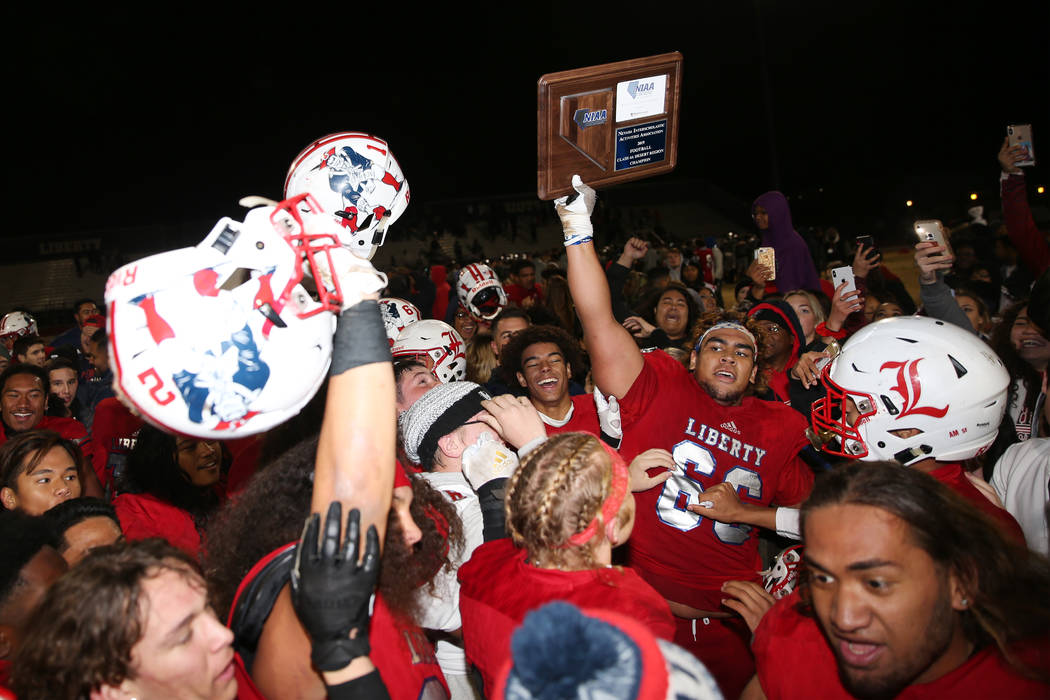 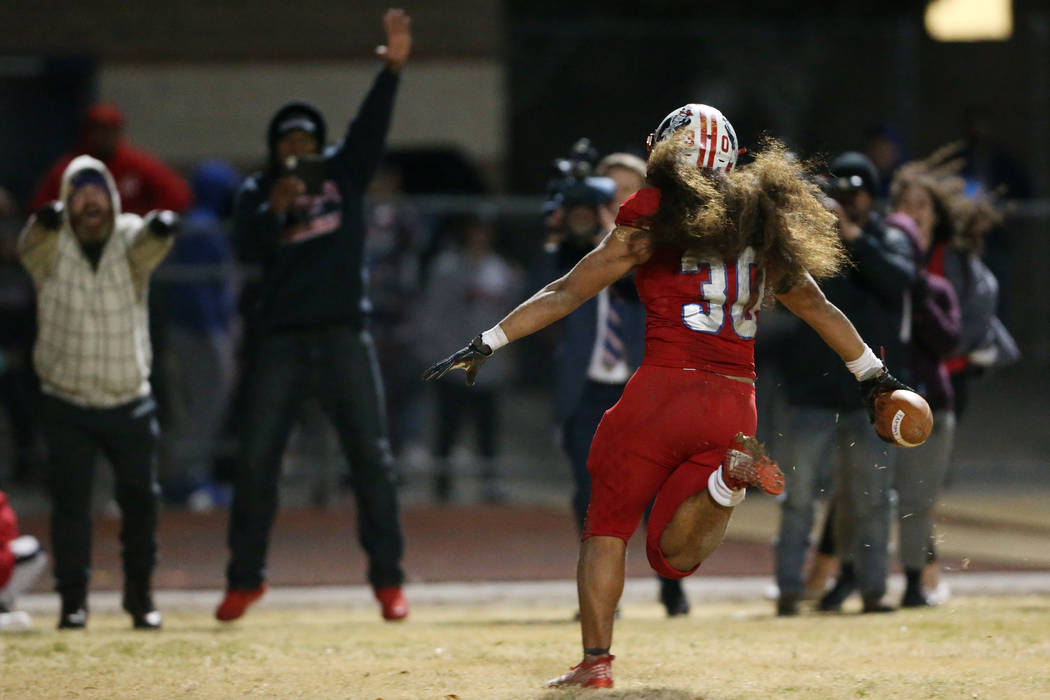 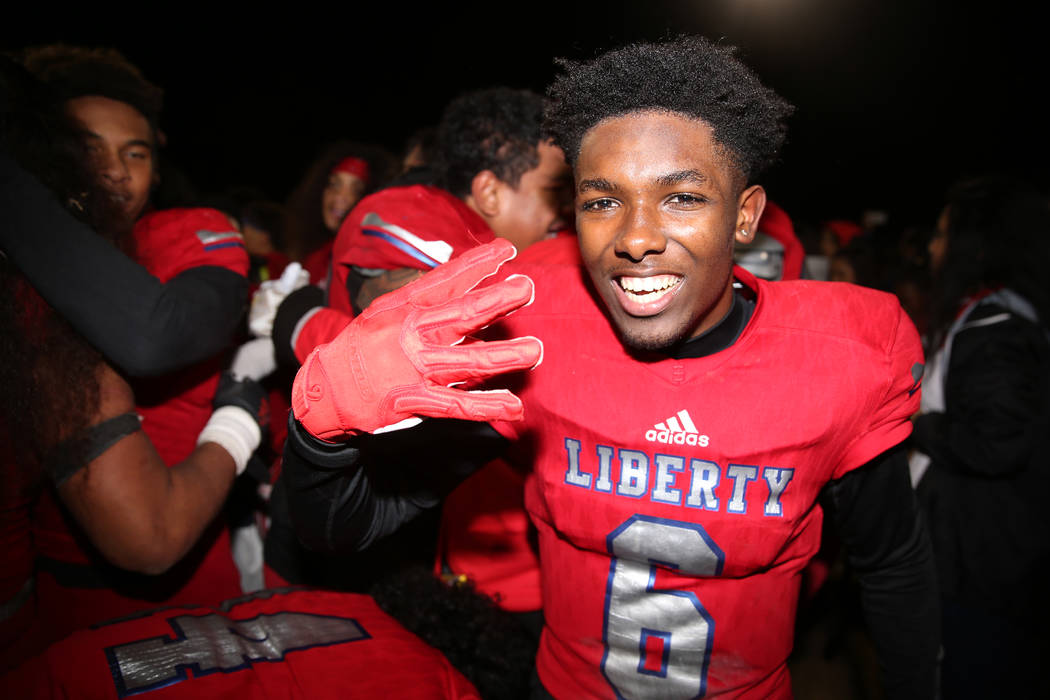 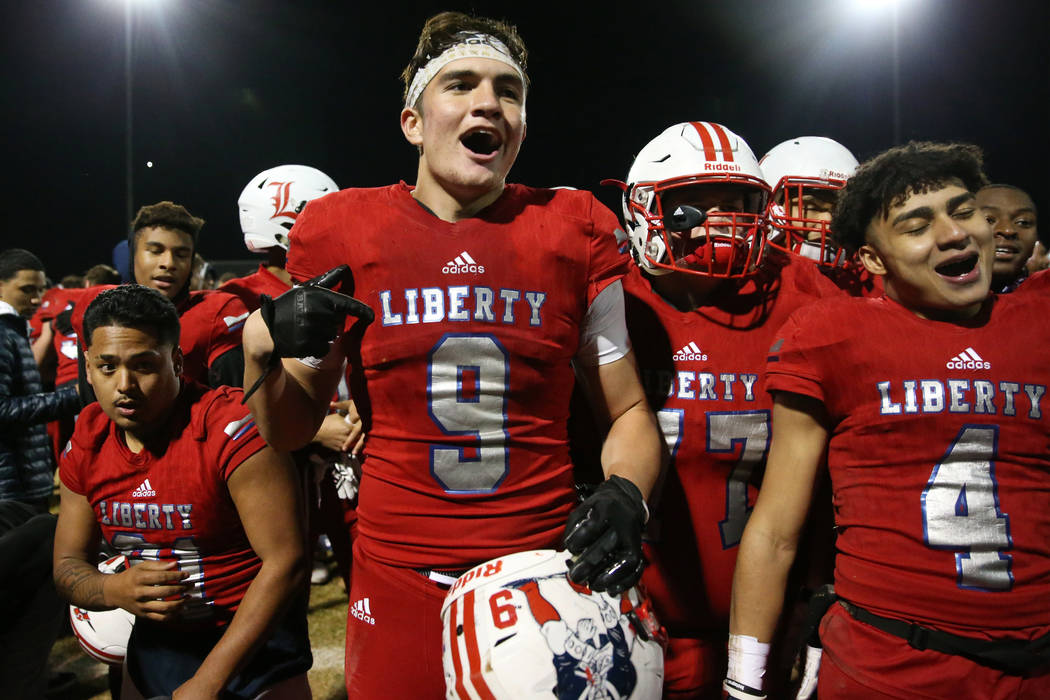 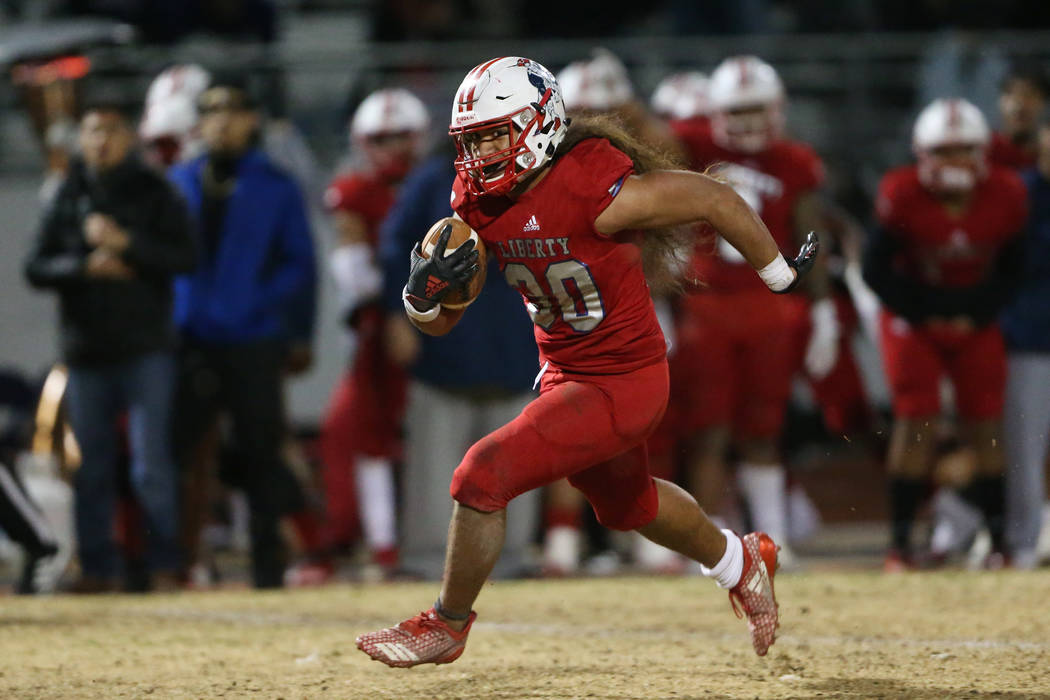 No matter what else happened in the past 10 years in Nevada high school football, the ending was always the same.

Bishop Gorman was celebrating with the state championship trophy, usually after a blowout win that was more coronation than contest.

The Gaels’ decadelong reign of dominance will long live in Nevada lore. Their 10 consecutive state titles is a record for any classification and included a 115-game winning streak against in-state opponents, a 55-game run against all foes and three straight mythical national championships from 2014 to 2016.

But like all great streaks, they have to end sometime.

The end to Gorman’s came Friday night, when running back Zyrus Fiaseu sauntered into the end zone from 7 yards in overtime to clinch Liberty’s 30-24 victory in the Desert Region final.

That play set off a chaotic celebration on Liberty’s home field, one befitting the dethroning of a dynasty.

“Bishop Gorman set the standard for excellence,” Liberty coach Rich Muraco said Saturday. “If you’re a competitor, you want to rise to that standard.”

Not only had nobody been able to match the Gaels over the past 10 years, nobody had come close. Gorman’s last loss to an in-state team was against Palo Verde on Nov. 21, 2008.

The vast majority of the Gaels’ in-state games since then, including each of their eight this season before Friday, were played at least partly under the 35-point mercy rule of a running clock. In reality, though, most of their games were over before the teams reached the field.

“First and foremost, I want to say congratulations and thank you to all of our kids over the last 11 years — the last 10 years and this year, too — for all they’ve done and accomplished,” Gorman coach Kenny Sanchez said Saturday. “I can’t thank them enough for the things they did and all the hard work they put in. It’s amazing what our players did.”

The absolute apex of the Gaels’ run was in 2016, when they capped their third straight undefeated season with an 84-6 win over Liberty in the state championship game.

That loss was the third for the Patriots to Gorman in state championship games during the streak, and Liberty also has dropped four state semifinal games to the Gaels. But after the 2016 blowout, Liberty could see itself getting closer.

Gorman’s margin of victory over the Patriots was 22 in 2017 and 14 last season, both state semifinals. All seven of those previous meetings were either on Gorman’s home field or a neutral site.

Liberty finally got the Gaels on its home field Friday and took advantage, even after falling behind 17-3 at halftime.

“I think it was a good, classic football game,” Sanchez said. “Both teams played really hard and are really good. We both had our chances, but they stuck in there and kept grinding.”

In many ways, Liberty molded its program after Gorman’s, the most obvious being that both play all of their nonleague games against top-notch out-of-state opponents.

The Patriots’ nonleague slate was particularly ambitious this season, as four of their five games were against teams that began the year ranked in the top 40 in the nation.

They came out of that gantlet with an 0-5 record but a better understanding of how to handle adverse situations that arise within games.

“There are momentum swings throughout, and you have to fight through ups and downs,” Muraco said of Friday’s game. “Even though we were down, I had a good feeling because we were moving the ball.”

Gorman retook the lead after Liberty tied the score at 17, but the Patriots answered late in the fourth quarter to send the game into overtime.

The Gaels missed a field goal with their possession, which opened the door for Fiaseu’s heroics.

The Patriots play in the state semifinals next Saturday, with hopes that Friday’s win will be a steppingstone to their first state title.

As for what’s next for Gorman, Sanchez said that “it’s the day after” and he hasn’t thought much about it.

But if anyone thinks this is the beginning of a Gorman fall, Muraco said to think again.

“It’s not like they’re some old fighter that’s 40-something years old and gets knocked out and their career is over,” he said. “They have great coaches and great players, and a lot of their better players are sophomores. This is going to fuel them. I don’t expect any drop-off.”