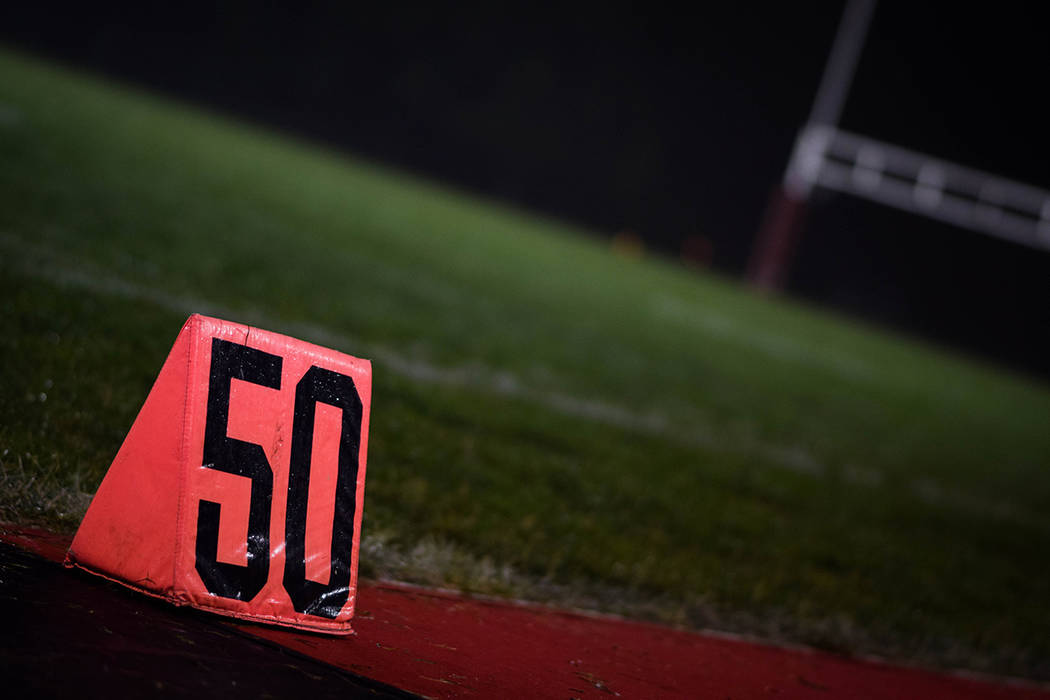 Tayjon Bulloch caught three passes for 140 yards and two touchdowns as Canyon Springs went on the road and routed Eldorado 48-7 to lock up one of the Northeast League’s four playoff spots.

Martin Blake ran for 113 yards and a touchdown on eight carries. Blake also had a punt return for a touchdown for the Pioneers (2-6, 2-2).

The Pioneers will host Legacy next week. The winner of that game is the No. 3 playoff seed for the Northeast League, with the loser taking the fourth spot.

Centennial 49, Bonanza 6 — At Bonanza, Jordan McGilbra scored two touchdowns on fumble recoveries as the Bulldogs rolled past the Bengals in Class 4A Northwest League play.

Jordan Smith ran for 119 yards and two touchdowns on 15 carries to lead the Bulldog offensive attack.

Green Valley 42, Basic 0 — At Green Valley, Garrett Castro threw three touchdown passes as the Gators blanked the Wolves to keep the Henderson Cup for another year.

Noah Hawthorne ran for two scores — 5 and 45 yards — as the Gators (6-4, 4-1 Southeast League) used big plays to pounce on their rival. Castro connected with Ricci Patillo on touchdown passes of 65 and 35 yards, and he hit Brady Duncan with a 60-yard touchdown pass in the second quarter. Maaliek Duncan ran for a 40-yard touchdown midway through the second quarter to put the Gators ahead 28-0.

Green Valley finished second in the Southeast League and will host Durango in the playoffs next week. The two teams met at Green Valley on Aug. 30 with the Gators rolling to a 39-3 win.

Zyrus Fiaseu ran for two first-half touchdowns as the Patriots (5-5, 5-0) built up a 32-0 lead by halftime. Daniel Britt ran for a score and threw touchdown passes to Moliki Matavao, Jared Tufele and Ezra Tomhoon for the Patriots. Cliff Weber returned an interception 26 yards for a defensive score.

The Patriots host Clark for the 4A playoffs next week.

Despite the loss, the Cougars (5-5, 2-3) qualified for the playoffs as fourth seed from the Southeast League.

The Diamondbacks finished their season at 5-5, 2-4.

Legacy 66, Mojave 6 — At Legacy, quarterback Evan Olaes ran for 221 yards and three touchdowns and threw for 250 yards and two scores as the Longhorns routed the winless Rattlers in Northeast League action.

Aaron Holloway caught four passes for 157 yards and a touchdown for the Longhorns (5-4, 2-2), who also received defensive scores on a Javiel Roa interception return and Andres Nunez fumble return.

The Longhorns will play Canyon Springs next week. The winner will be the Northeast League’s third seed in the playoffs, while the loser will claim the No. 4 seed.

Bishop Gorman 62, Clark 0 — At Bishop Gorman, the Gaels wrapped up their regular season by rolling past the Chargers to claim the Southwest League title.

The win was the first for the Grizzlies (1-7, 1-5 Southwest League) in the four years of this being “The Real SV” game.

Jyaire McGree caught two touchdown passes, and Tavon Scott ran for another score for the Grizzlies The bright spot for head coach Marcus Teal is Spring Valley won its two rivalry games. The Grizzlies’ other win was over Bonanza in the “Banner Game.”

Boulder City 21, Del Sol 16 — At Boulder City, Devon Walker ran for 105 yards and two touchdowns as the Eagles held off the Dragons in the first round of the Class 3A Southern Region playoffs.

Boulder City (8-2) led throughout the game though Del Sol (4-6) closed within a single score in the final minutes.

Matthew Felsenfeld got the Eagles on the board in the second quarter when he caught a pass from Parker Reynolds, rolled over a would-be tackler, then raced to the end zone for a 55-yard touchdown.

Walker extended the lead on a 4-yard run early in the third quarter. The Dragons responded with a 6-yard scoring run from Damani Wilks on the ensuing drive.

Walker’s second score, a 3-yard run midway through the fourth quarter, extended Boulder City’s lead to 21-6 before Del Sol made one last comeback attempt with Wilks completing a fourth-down touchdown pass to Maalik Flowers with three minutes left in the game.

Moapa Valley 35, Pahrump Valley 0 — At Pahrump Valley, Hayden Redd ran for 99 yards and two touchdowns as the Pirates blanked the Trojans in the first round of the Class 3A Southern Region playoffs.

Redd also had a 42-yard fumble recovery for a touchdown as part of a 21-point second quarter for the Pirates (7-4).

Steele Skinner ran for 37 yards and a touchdown on five carries, and Chris Hoy caught a 24-yard touchdown pass from Kashten Frei for the Moapa Valley.

The Pirates will travel to Virgin Valley next week to take on the Bulldogs. Virgin Valley won the previous matchup 28-19 on Oct. 24.

“It’s going to be a dogfight and a chess match,” Moapa Valley coach Brent Lewis said. “They were more physical last time, and we need to match that. We had three drives inside their 20 that we didn’t capitalize on. We need to capitalize in the red zone.”

The Trojans season ends at 4-6.

Thornock finished with 187 rushing yards and two scores on 17 carries. He also caught an 11-yard touchdown pass from Cody Zile and converted four 2-point conversions — three on the ground.

Zile threw for two touchdowns and ran for one score for Lincoln County (7-2, 5-0).