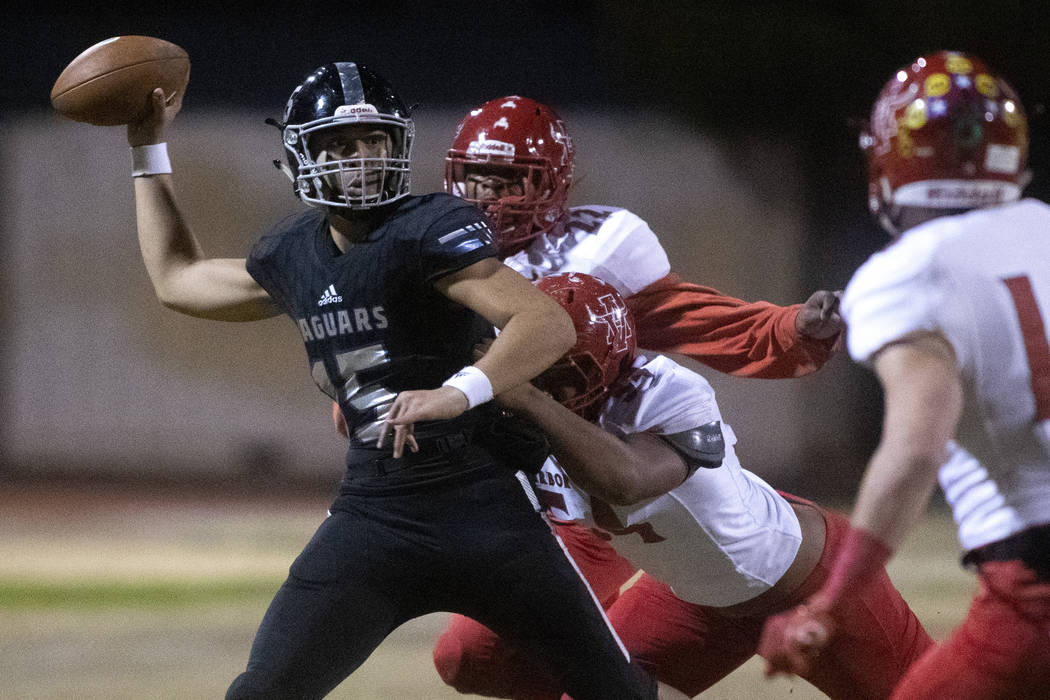 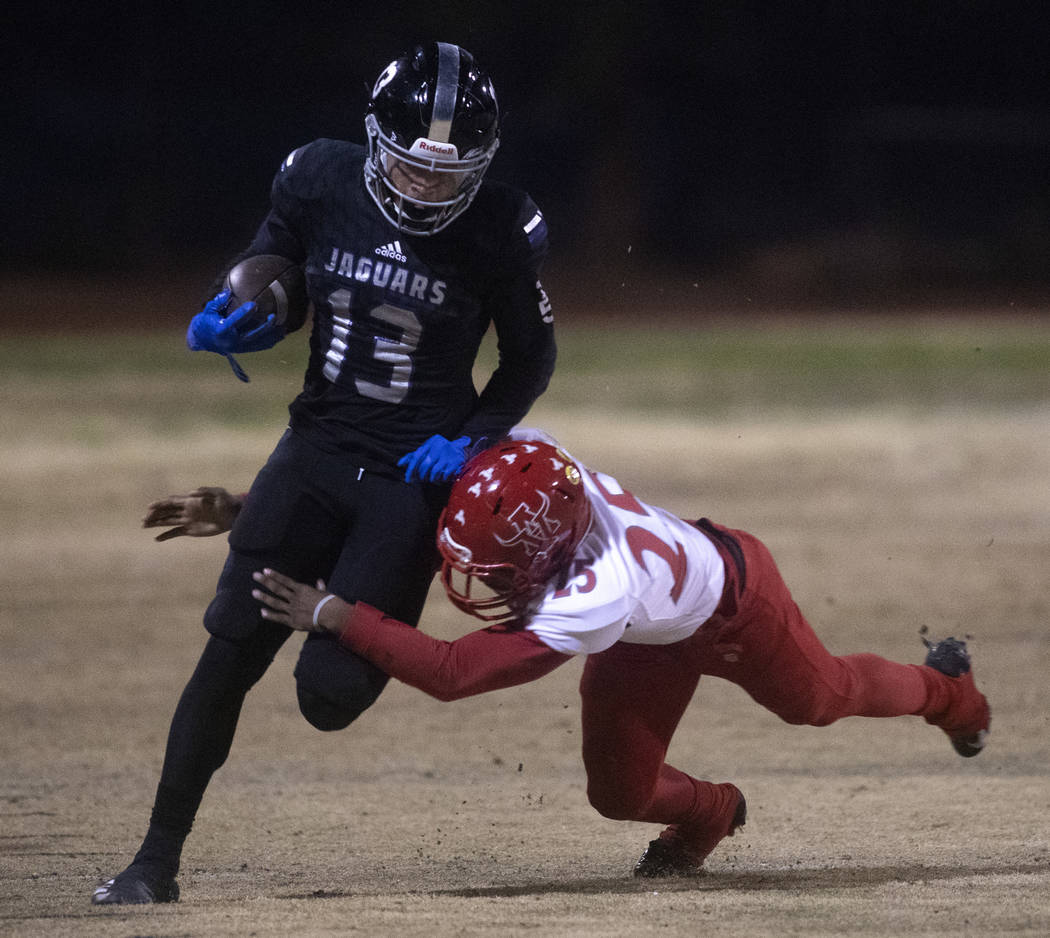 Desert Pines' Michael Jackson (13) runs with the ball as Arbor View's Adrian Bates (25) jumps to tackle him during the first quarter of the game during the Mountain Region semifinals on Friday, Nov. 22, 2019, at Desert Pines High School in Las Vegas. (Ellen Schmidt/Las Vegas Review-Journal) @ellenkschmidt_ 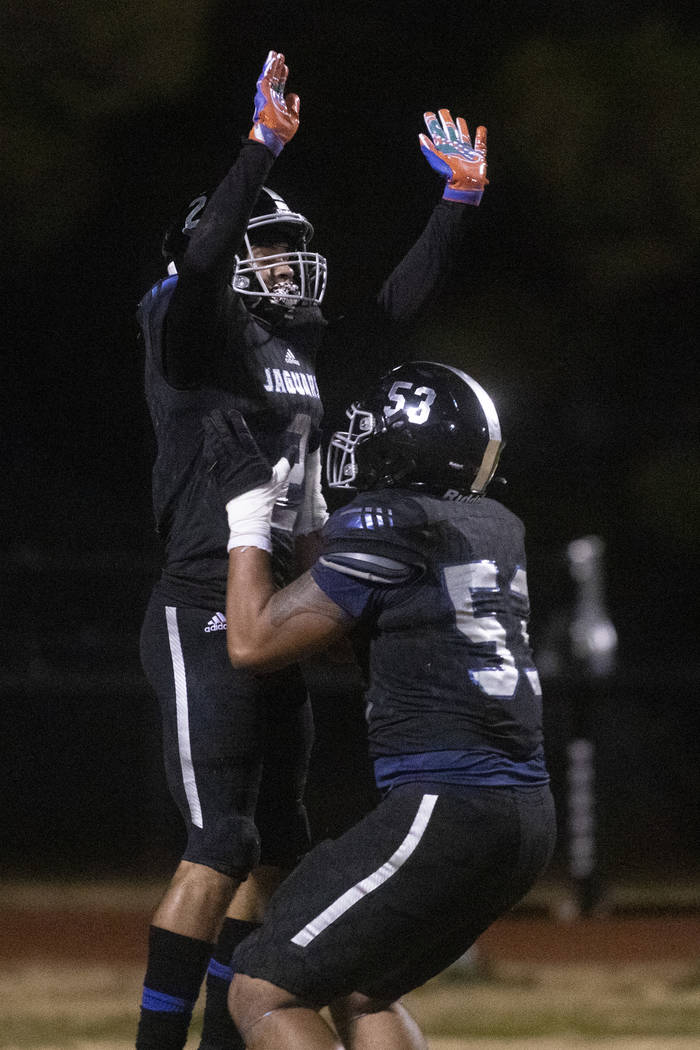 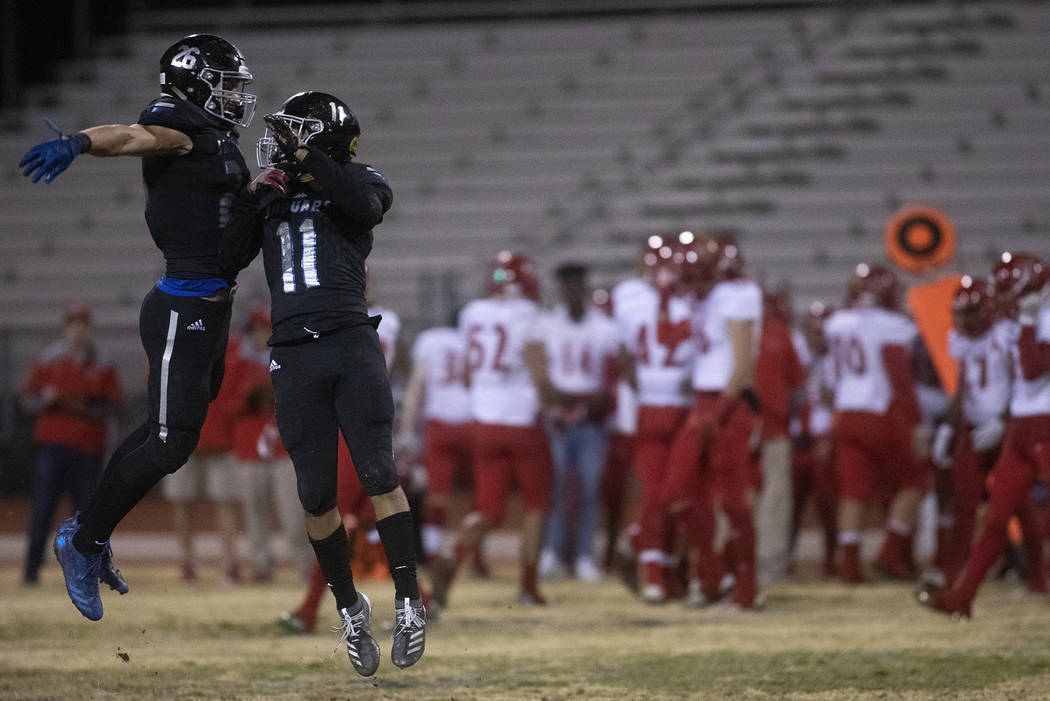 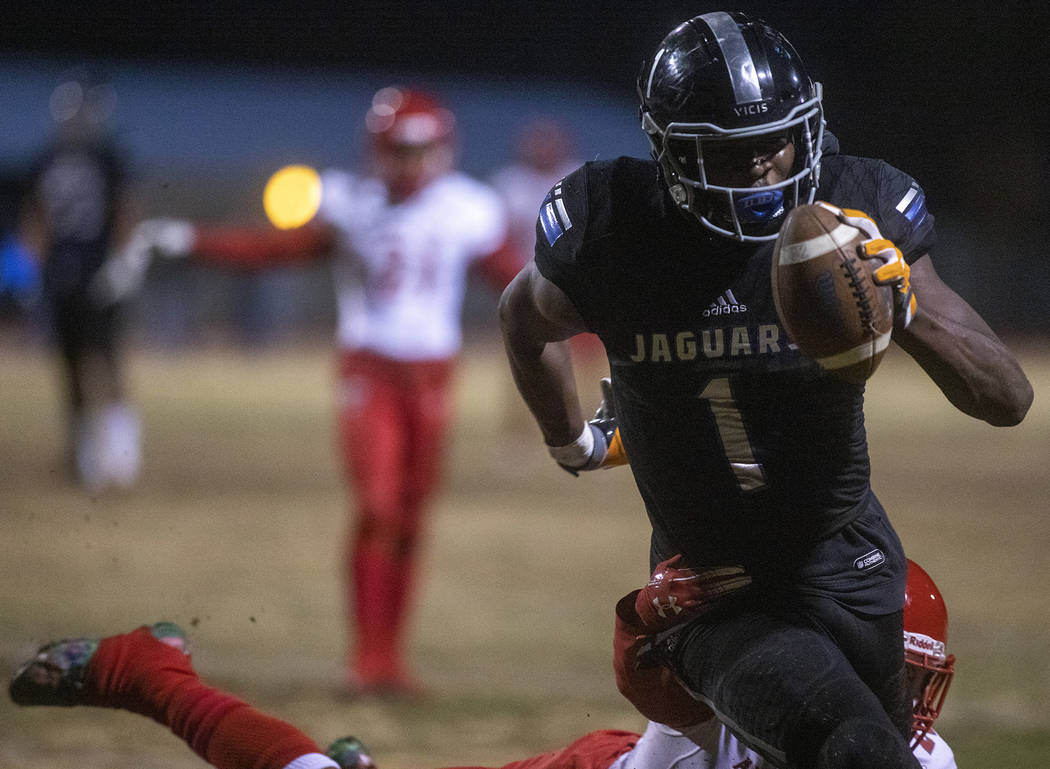 Desert Pines didn’t know if it was going to play Canyon Springs or Arbor View in the Mountain Region semifinals until Friday morning.

And while that might have been a distraction, the Jaguars keep their dreams of a state title alive with a 35-7 win over Arbor View on Friday night.

Desert Pines will play Centennial, a 44-7 winner over Palo Verde on Friday, in the Class 4A state semifinals at 4 p.m. Nov. 30 at Eldorado High School.

“Crazy week … we thought we were going to play Canyon, then had to hit the reset button on Monday,” Desert Pines coach Tico Rodriguez said. “It was just a crazy week for our kids, but at the end of the day, they just want to play football.”

In the first quarter, the distractions seemed to affect both teams. The Jaguars (11-0) had two touchdowns called back by penalties, and the Aggies’ offense couldn’t get going because of penalties.

“It might have (been a distraction), but our kids stayed focus and they work through those things,” Rodriguez said. “We don’t panic. Our guys are resilient, and we know this is going to be part of the game.”

In the second quarter, the Aggies finally started to move the ball. Then, on a third-and-6 from their 48-yard line, quarterback Kyle Holmes’ first pass was intercepted by sophomore safety Jett Solomon, who finished with three interceptions.

“I just saw the tight end go out for the flats, and my coverage is flats,” Solomon said. “So I was able to pick it off, and that just kind of gave us the boost. To get three interceptions against a power running team, that’s just crazy.”

On the next play, Desert Pines quarterback Rjay Tagataese connected with freshman wide receiver Deandre Moore on a 54-yard touchdown pass to give the Jaguars a 7-0 lead.

Tagataese finished with 334 yards passing and three TDs, and Moore had five catches for 107 yards and three TDs.

“Those are two special players,” Rodriguez said. “When you have those kinds of guys making those plays, it’s a special thing.”

The Jaguars extended their lead to 14-0 when Javontae Barnes scored from the 1-yard line.

In the second half, Tagataese found Moore for a 21-yard TD pass for a 21-0 lead.

Early in the fourth quarter, Tagataese found Moore again, this time for a 7-yard TD pass to give Desert Pines a 28-7 lead. Tagataese scored on a 10-yard run for the final score.

“We stay focused no matter what opponent we had — Canyon, Arbor — we just play as a team,” Solomon said. “We stayed disciplined all week.”