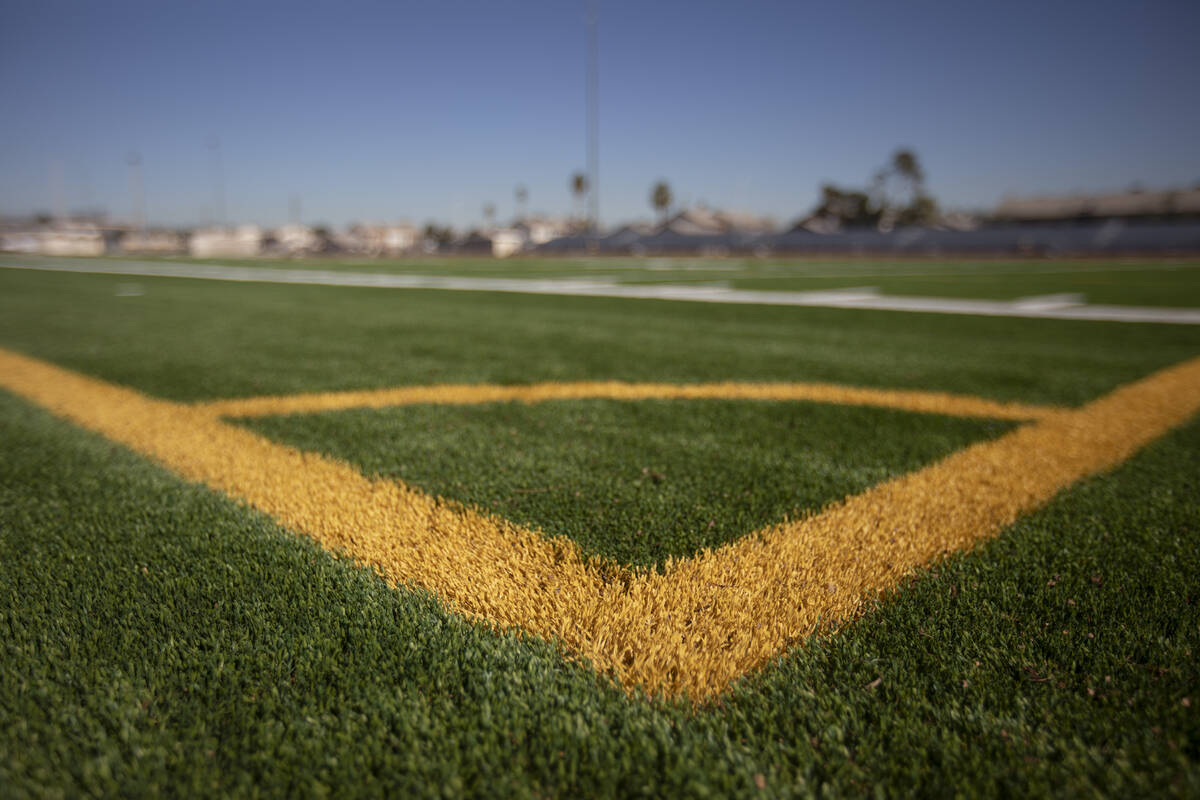 As Centennial prepared to play for the state football championship two years ago, it had a problem.

The Bulldogs couldn’t get on their football field to practice. Rain had essentially made it unusable, so they “had to find a small area on the soccer field that wasn’t completely wet,” Centennial coach Dustin Forshee said.

That’s not an issue anymore, not after the Clark County School District installed turf fields at all 34 of its high schools over the past two years.

The new playing surface has been well-received.

“It’s very nice. I love it,” Virgin Valley coach Matt Woods said. “It’s so good for us and our soccer programs. It just makes things so much easier. There were fields I dreaded going to. I was worried about somebody blowing out a knee or hitting a hole from a sprinkler and breaking an ankle.”

On the old grass fields, coaches walked around and looked for problem areas to avoid. Forshee said he looked to see if his kicker had solid footing to try his extra points in the middle of the field or needed to move a yard or two either way.

“There were things like that, that you shouldn’t have to think about,” Forshee said.

The grass fields were usually in the best shape early in the season. But after Sept. 1, limitations on watering and continuous use, including by the band and youth football programs, left most fields looking like a dirt patch by midseason.

Even schools that had turf fields weren’t immune from problems. Clark, Rancho and Valley played every game in 2019 on the road after their fields were deemed unplayable. Arbor View and Boulder City barely avoided the same fate. Those five schools had their fields replaced in the spring of 2020, while the other 29 were done in three groups during the 2020-21 school year.

“It’s amazing, just to be back on our home field,” Valley coach Quincy Burts said. “Not having to travel for every game is one less thing we have to worry about, and it’s a good feeling to know the field is intact and well taken care of.”

Virgin Valley and Moapa Valley, the only two CCSD schools that played the limited spring season, had to get creative to play the Hammer Game. Both were in the last construction group, and neither’s field was done by the date of their game, so they met at a park in Mesquite that didn’t have bleachers or goalposts.

Woods said it made for a surreal situation, but he was happy the teams were able to play. They won’t have to make similar arrangements for their rivalry game this year, and CCSD teams know if they’re playing another team from the district, they will be on a playing surface similar to their own.

“Of everything, that’s the biggest,” Arbor View coach Matt Gerber said. “There’s consistency across the board.”

The new turf fields are made differently than the old ones. The old fields used crushed tires to provide cushioning. The new ones use coconut cork, which makes for a lighter-colored foundation under the turf and is cooler. That’s a plus in a place like the Las Vegas Valley, where temperatures routinely reach triple digits in the summer and early fall.

“The new fields we were fortunate to have installed have provided a world-class surface and showcase for all of our student-athletes to display their amazing athletic ability,” CCSD athletic director Tim Jackson said in a text message. “We couldn’t be happier with the result.”

Forshee said the only downside to the new field is players can get turf burn, especially on their arms, if they slide the wrong way.

Centennial has also had more knee injuries this season than before, but Forshee made it clear he doesn’t attribute that to the turf.

“That’s just how our season is going,” he said. “But it’s something we’ll keep an eye on, for sure.”