If you are having problems accessing today’s e-Edition, please click on this link VIEW E-EDITION
By Lindsey Smith Special to the Review-Journal
November 5, 2021 - 10:12 pm 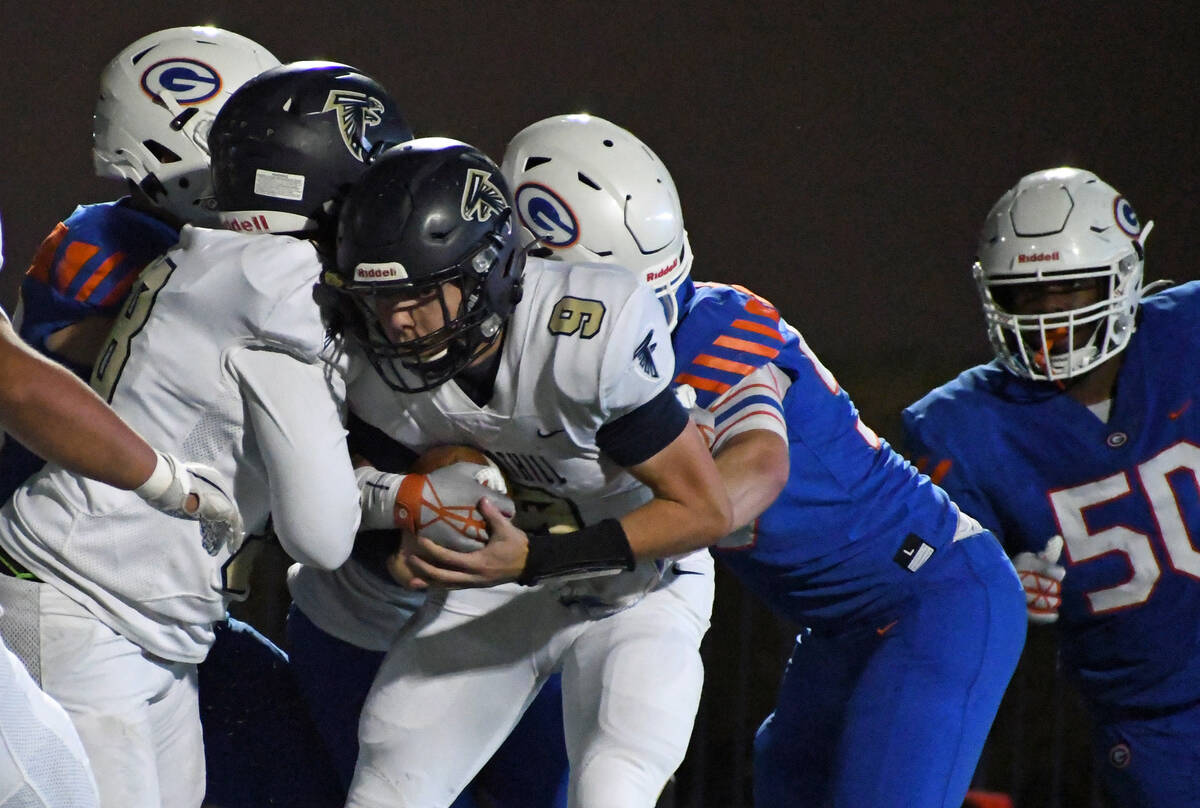 Foothill quarterback Jack Throw is sacked during a 5A region semifinal at Bishop Gorman on Friday, Nov. 5, 2021. The Gaels defeated the Falcons 63-6. (Lindsey Smith, special to the Review Journal) 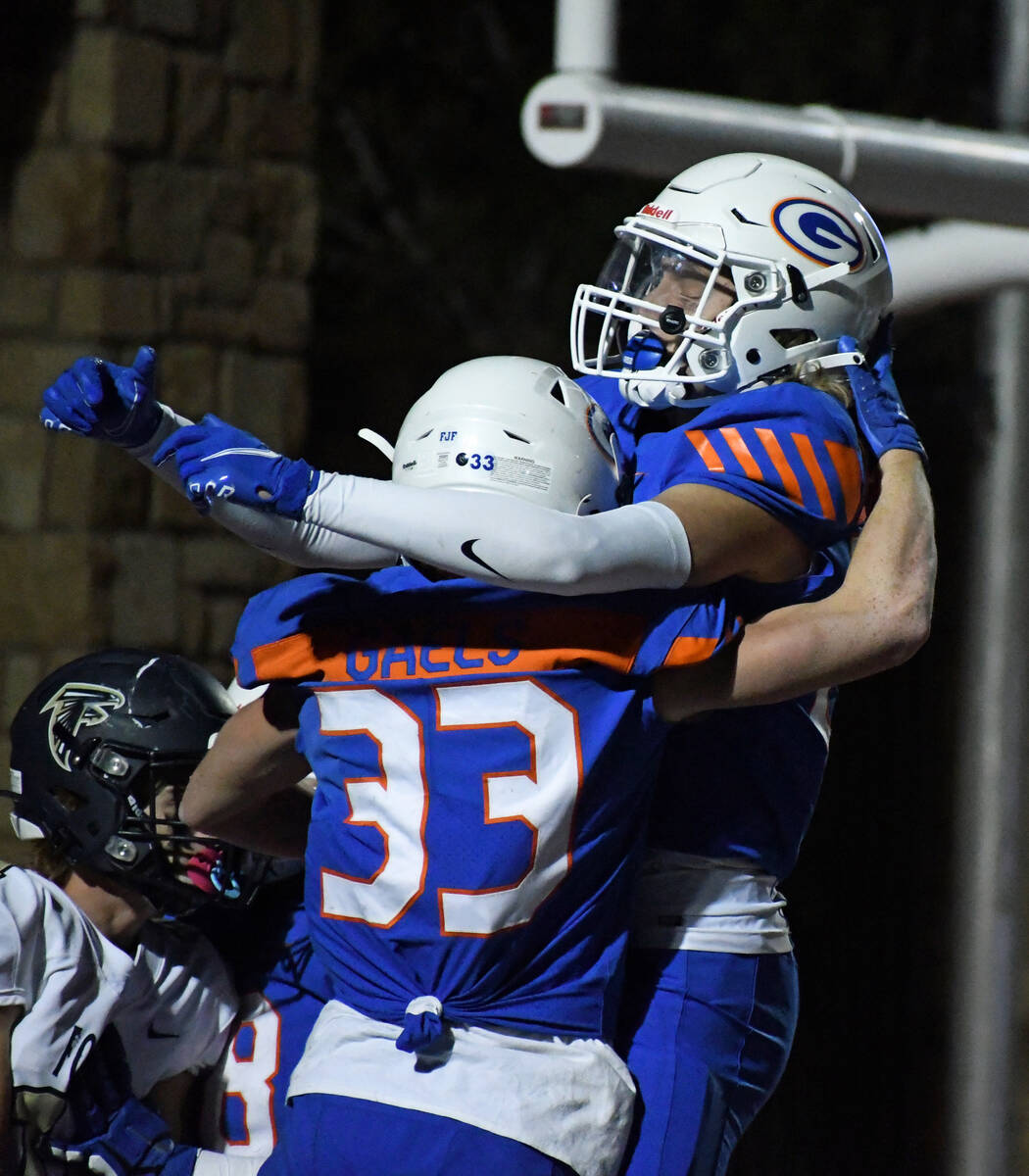 Cam Gray (33) celebrates a touchdown during a 5A region semifinal at Bishop Gorman on Friday, Nov. 5, 2021. The Gaels defeated the Falcons 63-6. (Lindsey Smith, special to the Review Journal) 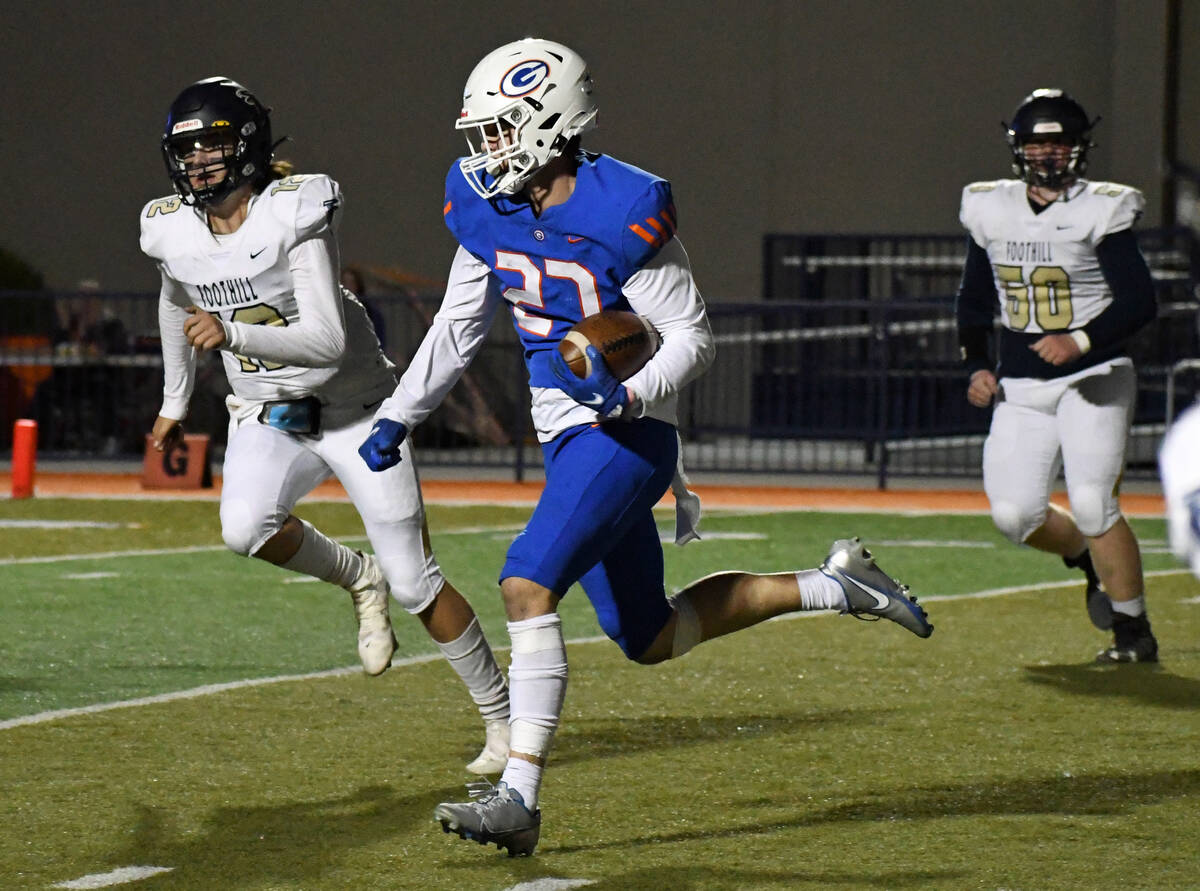 Bishop Gorman linebacker Garrett Pomerantz runs back an interception return during a 5A region semifinal at Bishop Gorman on Friday, Nov. 5, 2021. The Gaels defeated the Falcons 63-6. (Lindsey Smith, special to the Review Journal) 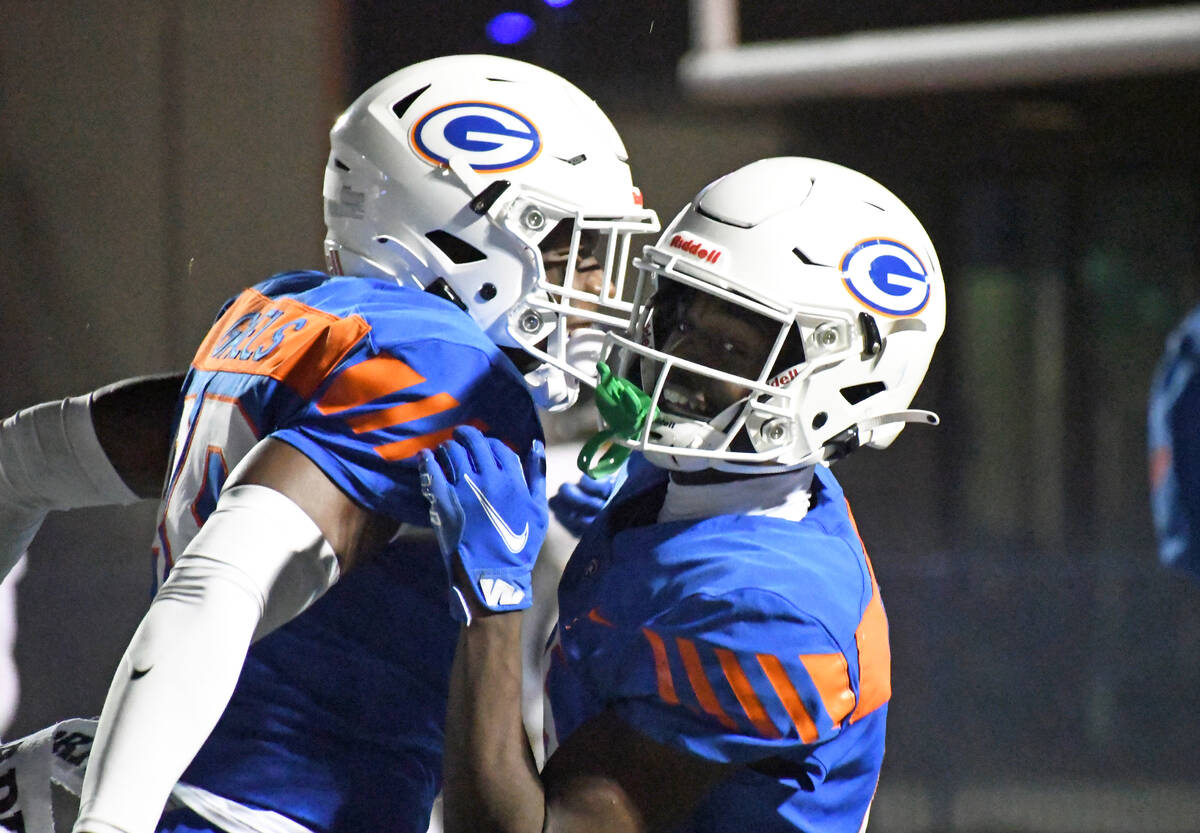 Bishop Gorman’s Jonathan Brady (right) celebrates a touchdown during a 5A region semifinal at Bishop Gorman on Friday, Nov. 5, 2021. The Gaels defeated the Falcons 63-6. (Lindsey Smith, special to the Review Journal) 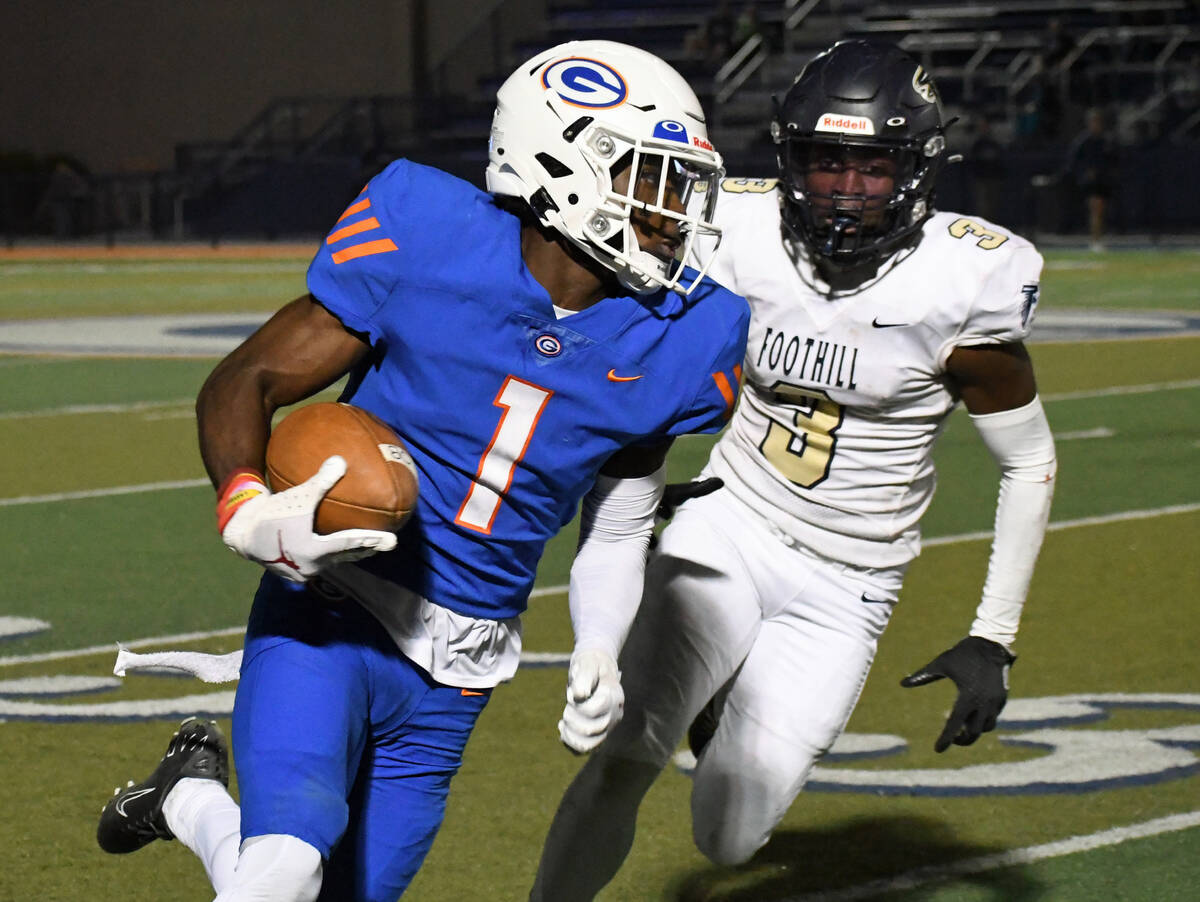 It’s the second week of playoffs, and it appears Bishop Gorman is only getting started.

The Gaels demolished Foothill 63-6 on Friday at home in a Class 5A Southern Region semifinal.

Although the Gaels’ shutout streak ended with a 72-yard touchdown run by Foothill senior Kendric Thomas, Bishop Gorman never let its foot off the gas, and sparked a running clock in the first half.

Thomas’ efforts ended Gorman’s streak at 294 scoreless minutes. But the Gaels defense didn’t give up much else, holding Foothill to 90 total yards, all while the offense racked up 519 of their own — the most so far this season.

Gaels quarterback Micah Alejado threw for 208 yards and three touchdowns, adding a 21-yard rushing score in the first half. The sophomore has run for a touchdown in his last three starts.

“It feels great to put up points like that,” Alejado said. “It just proves that all the hard work we did during the week and what we’ve been putting in pays off.”

Jonathan Brady had 99 yards receiving, including a 62-yard touchdown. Brady also ran back a long kickoff return to start the game, but a holding penalty brought the play back to the Gaels own 17 yard line.

The Gaels faced Foothill just two weeks ago in the regular-season finale, presenting a unique challenge for both teams with a quick turnaround between appearances. And Foothill (5-3) came prepared with a new weapon, as Thomas was out the last time the teams met.

“(Thomas) is a great player, but we were prepared,” Browner said. “Hats off to Foothill, but our defense just played phenomenal tonight. We are so proud of this defense.

“Holding everyone to zero was just something that happened, and we’re not worried about anyone scoring on us because we know — I wouldn’t play quarterback against this defense — we are just so proud of them.”

Just before halftime the Gorman defense found a big spark, pulling down back-to-back tackles for a loss to bring up third-and-21, deep in Foothill territory. Pressure forced Foothill quarterback Cameron Paul to release early, and right into the hands of senior linebacker Gerrett Pomerantz, who ran the ball back for a touchdown.

And a celebration ensued for Pomerantz’s first career interception.

“That defensive line works hard every day at practice, and we had a little bit more fuel to play better on defense today,” Pomerantz said.

“Execution was good tonight,” Browner said. “We got a ton of guys in and we have so many that can go, it’s a good problem to have and a blessing. It’s exciting to see the guys who start watch some other guys get in and perform. They appreciate what they can do and the hard work they put in.”