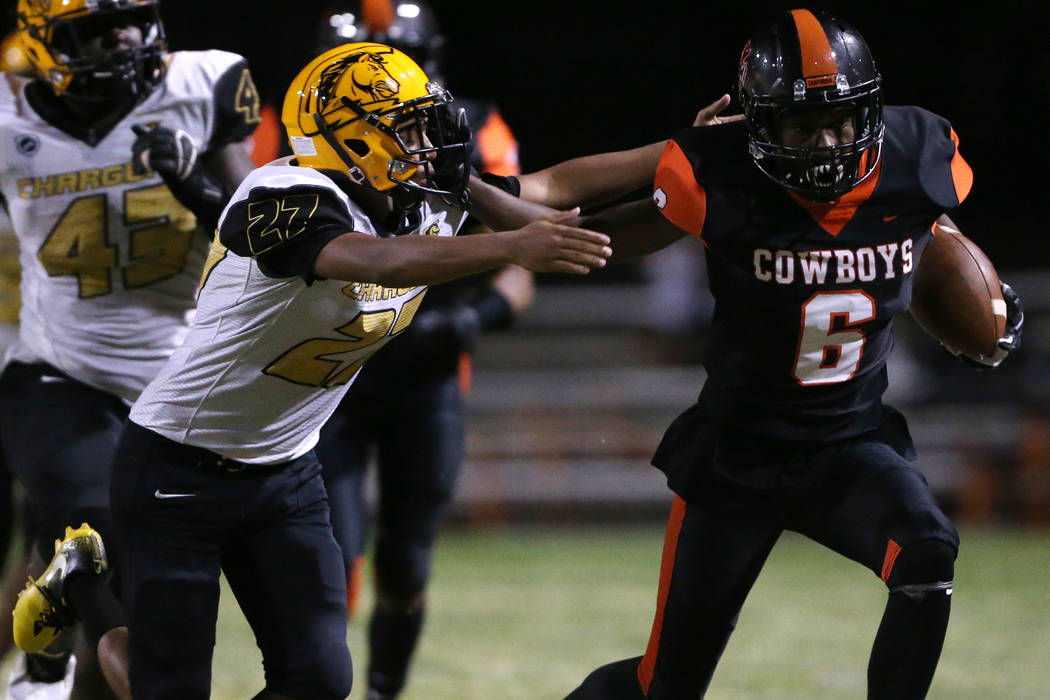 League play is in full swing throughout the valley. Let’s take a look at five of the biggest matchups this week.

Both teams are looking to go 2-0 in the Northwest League. Shadow Ridge (2-2) has been led by Marrion Macklin-Thomas and Aiden Valenzuela, who rushed for more than 100 yards in last week’s 55-20 win over Cimarron-Memorial. Palo Verde (4-1) was propelled by Charron Thomas’ 170 yards and a touchdown on only seven carries in a 42-6 win over Bonanza.

The stakes are high for this one, as the winner takes a massive step toward a playoff berth. Clark (5-1, 2-0 Southwest League) has won five straight but is on a short week after its 27-20 win over Sierra Vista on Saturday. Durango (2-4, 1-1) has had an extra day of rest after it beat Spring Valley 33-15 last Thursday behind Alariun Green’s 226 yards and two rushing TDs.

It’s the Southeast League opener for both teams. Liberty (0-5) comes in off a bye and is eager to get into the win column for the first time. Daniel Britt took over at QB in the Patriots’ last game and was 20-for-28 for 243 yards and two touchdowns in a wild 36-33 loss to Liberty (Arizona). Chaparral (4-1) is led defensively by Steve Torres, who has a valley-best five interceptions.

Both teams hope to bounce back in their Southeast League opener. Coronado’s defense had a rough second half in a 42-21 loss to Legacy last week, but the Cougars (3-2) have been prolific behind Keegan Tharp and his 886 passing yards and 11 touchdowns. Green Valley (2-3) has dropped three straight. The Gators’ offense has struggled, averaging 10.7 points per game during that stretch.

Cimarron-Memorial (3-2, 0-1 Northwest League) turned the ball over four times in the second half of its loss to Shadow Ridge. The Spartans have a balanced offense that can give opponents trouble if they hold on to the ball. Faith Lutheran (1-3) is making its Northwest League debut after a bye. The Crusaders have found a go-to target through the air in Peyton Thornton, who has 226 yards and four touchdowns receiving.