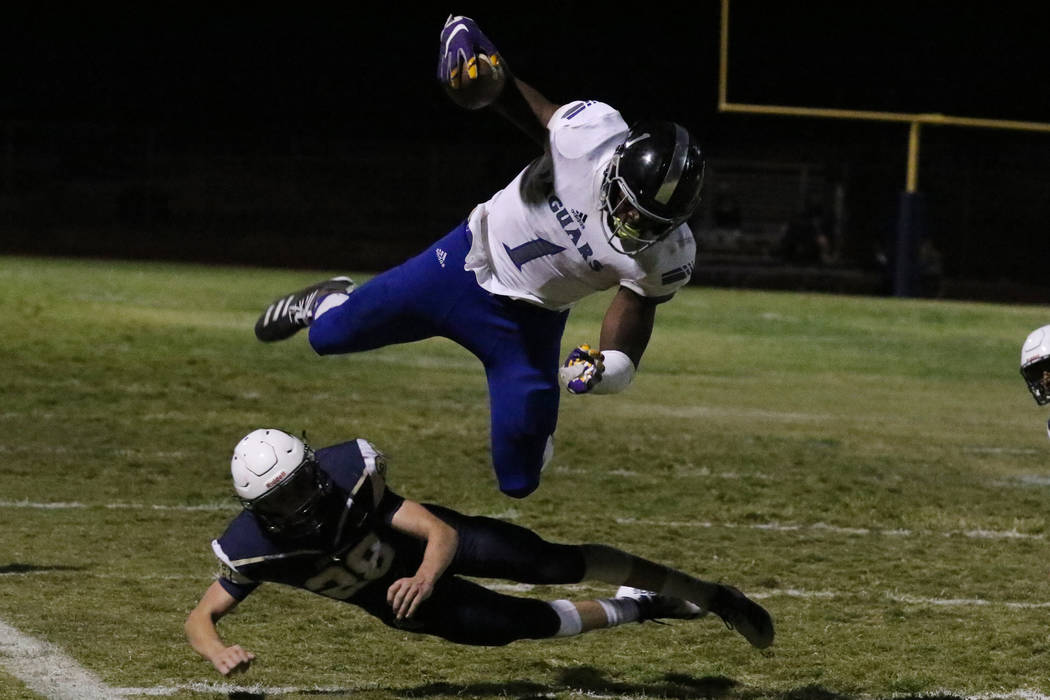 High school football stadiums will be dark and quiet Friday night, as most schools will be closed in observance of Nevada Day, a celebration of when Nevada became a state on Oct. 31, 1864.

So all the games in the valley will be played on Thursday night. Since 2000, the state has observed Nevada Day on the final Friday of October.

While that means a three-day weekend is imminent, it also means there’s work for football teams to get done and less time with which to do it.

That’s not an easy proposition for the coaches. But many of them have been around the valley for a while and know this week is coming. So they have a plan.

“I’ve been here for 19 years, and it’s something I had to get used to,” Desert Pines coach Tico Rodriguez said. “After a while you realize everybody is going to have a short week. Most schools are going to get an extended weekend, so that’s good for the players, coaches and the teachers.”

But there’s a lot of work to do before they can prop their feet up for the weekend. Rodriguez and his opposing coach Thursday, Legacy’s John Isola, are both happy the short week falls late in the season.

By this point, most teams are pulling back on contact in practice, and they’re not as concerned with issues such as trying to put players in the right positions or making sure they’re in condition. There might still be a tweak here and there, but teams usually get locked into their schemes early.

That leaves more time for focusing on what each opponent does well. For Isola, the challenge is clear, facing a Desert Pines team that is undefeated but largely untested.

“They’re loaded, and we all know it,” Isola said. “We have to be on our A-plus game and have limited mistakes.”

Desert Pines will have its own issues dealing with Legacy quarterback Evan Oleas and wide receivers like Aaron Holloway and Anthony Miles.

The good news for both coaches is they have familiarity with the other’s schemes. In fact, Isola and Rodriguez are close friends who were the offensive and defensive coordinator, respectively, at Desert Pines when the Jaguars played for a state title in 2001.

“They do a lot. They have playmakers and their quarterback is leading the city (in passing yards),” Rodriguez said. “They throw a lot at you, and it’s tough to prepare for in a short week.”

Dustin Forshee also knows the scheme he’ll encounter against Palo Verde. Stopping the double wing has been his No. 1 goal since his arrival at Centennial in 2017, so his Bulldogs will make the most of every moment they get on the field this week.

He’s counting on his players’ retention from Centennial’s 17-14 win over Arbor View on Sept. 27, another double-wing team. Forshee purposely scheduled the Bulldogs’ bye week before the Arbor View game.

“I knew two of the top teams in the league were Arbor View and Palo Verde,” Forshee said. ‘So I knew our defensive staff would have to be comfortable with the double wing. … I’m just glad the short week is the second time around.”

One thing lost in a short week is time get past last week’s result. Most teams have a 24-hour rule in which they can celebrate or dwell on a win or loss, or as Forshee put it, “Saturdays are usually reflection days.”

But there’s no time to look back. That could be good for a team like Foothill, which had a rough time in a 38-0 loss to Liberty last week. They get another opportunity to get back into the win column.

“It’s been a tough week, to be honest,” Foothill coach Vernon Brown said. “I hope we come into this game (against Green Valley) ready to play, but we put a lot of stock in that Liberty game. The guys are still upset about that. What I’m fearful of is it being a short week and having that Liberty hangover.”

No matter how the games come out Thursday, most coaches will have an extra day to get ready for next week. For some, that means diving into game-planning.

For others? It’s time to get out of town.