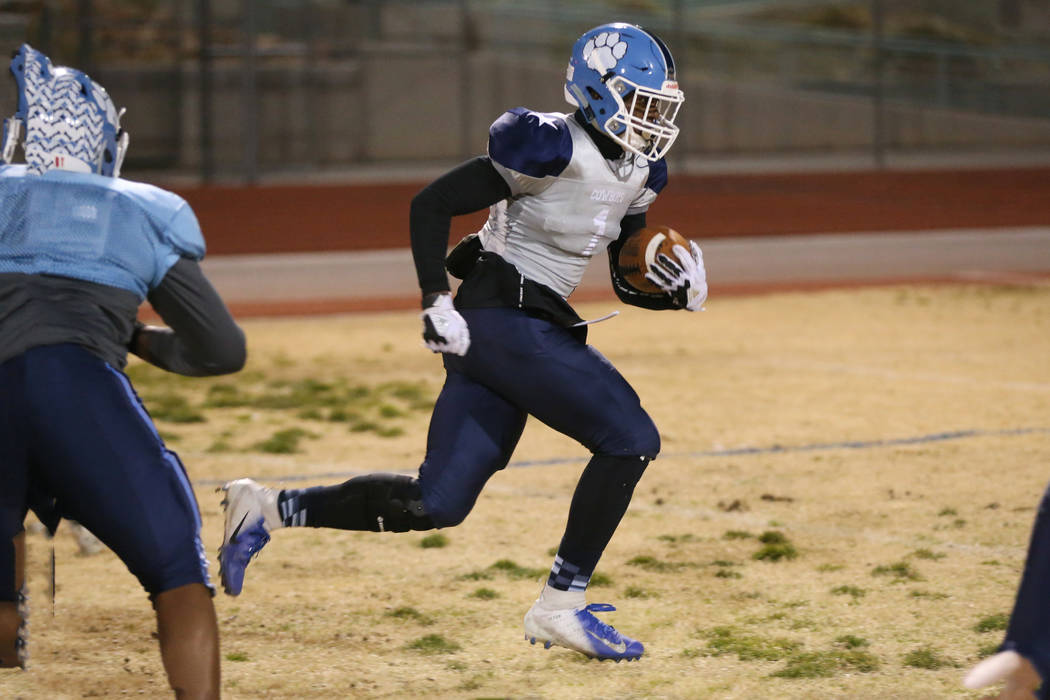 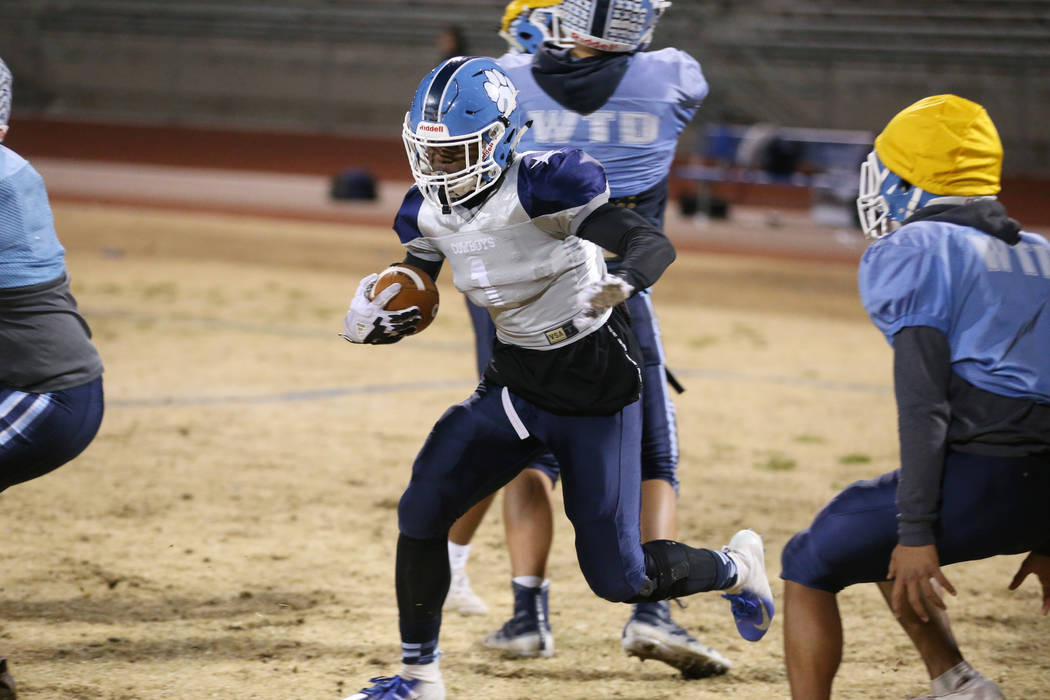 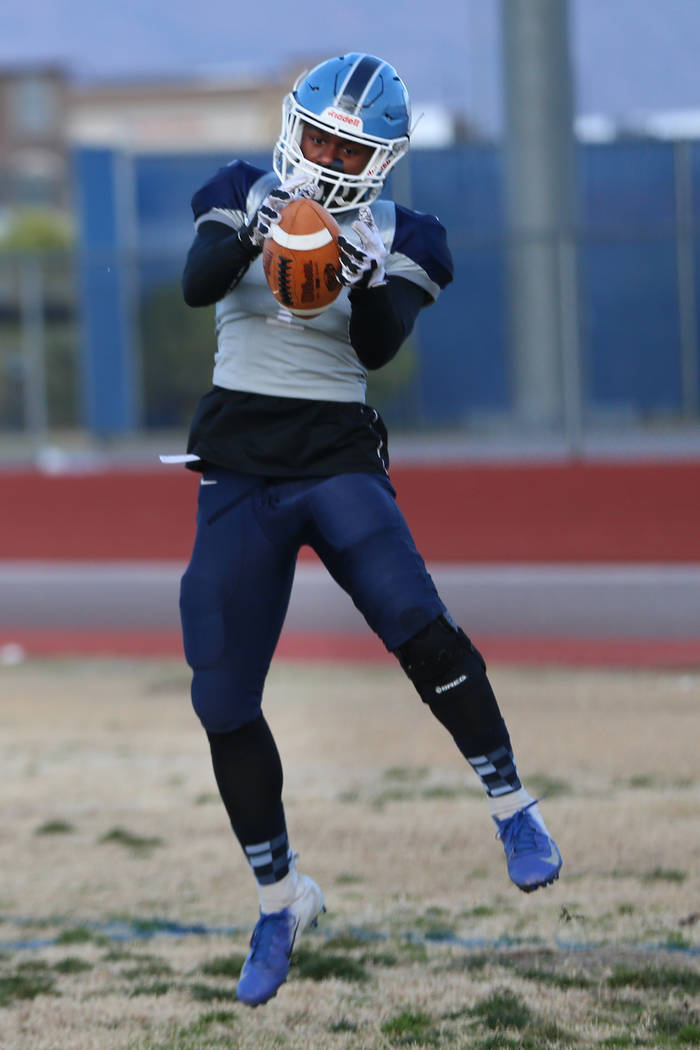 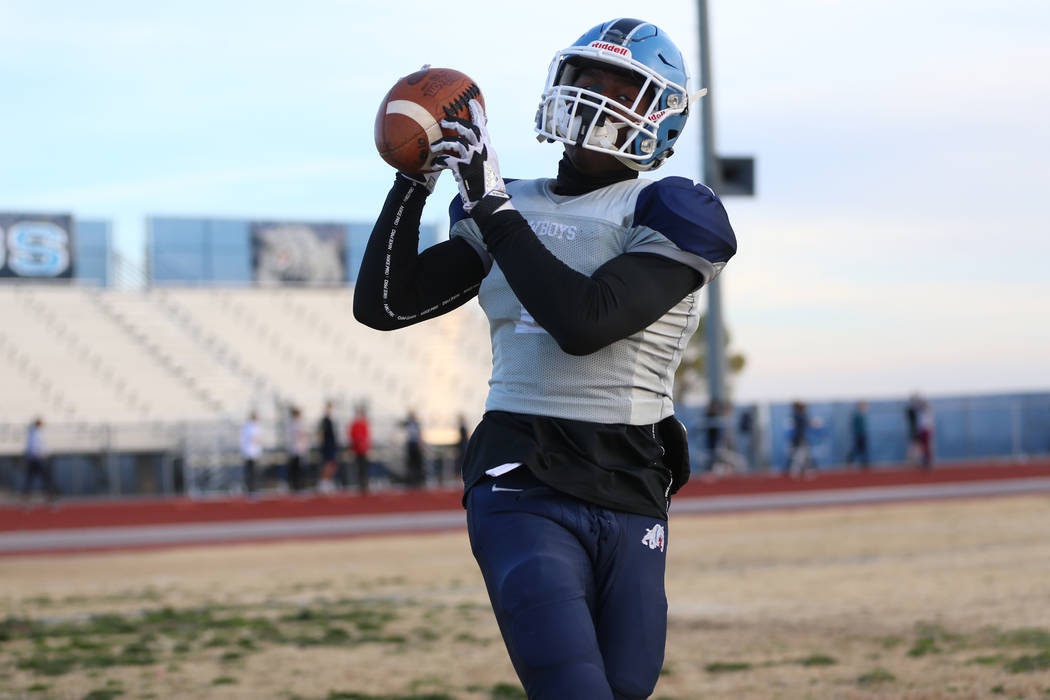 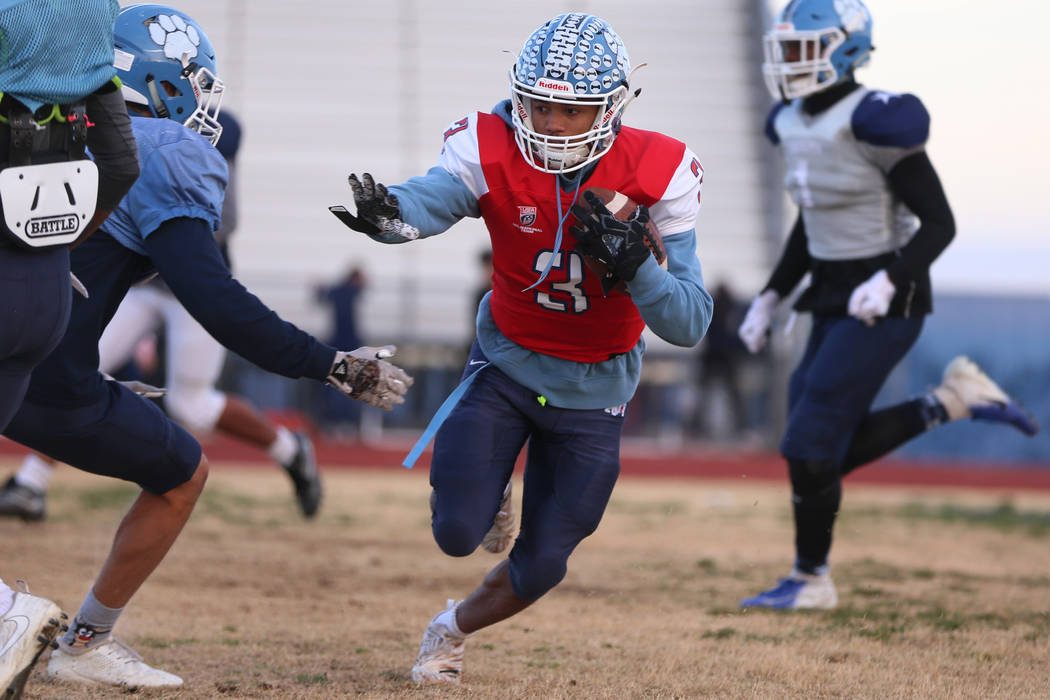 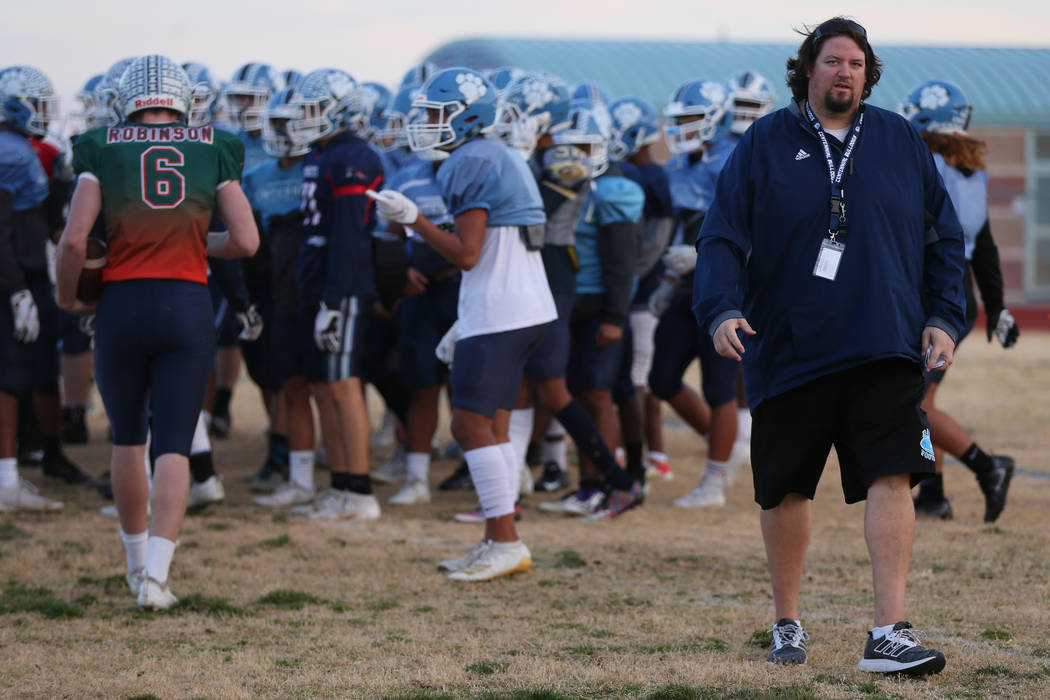 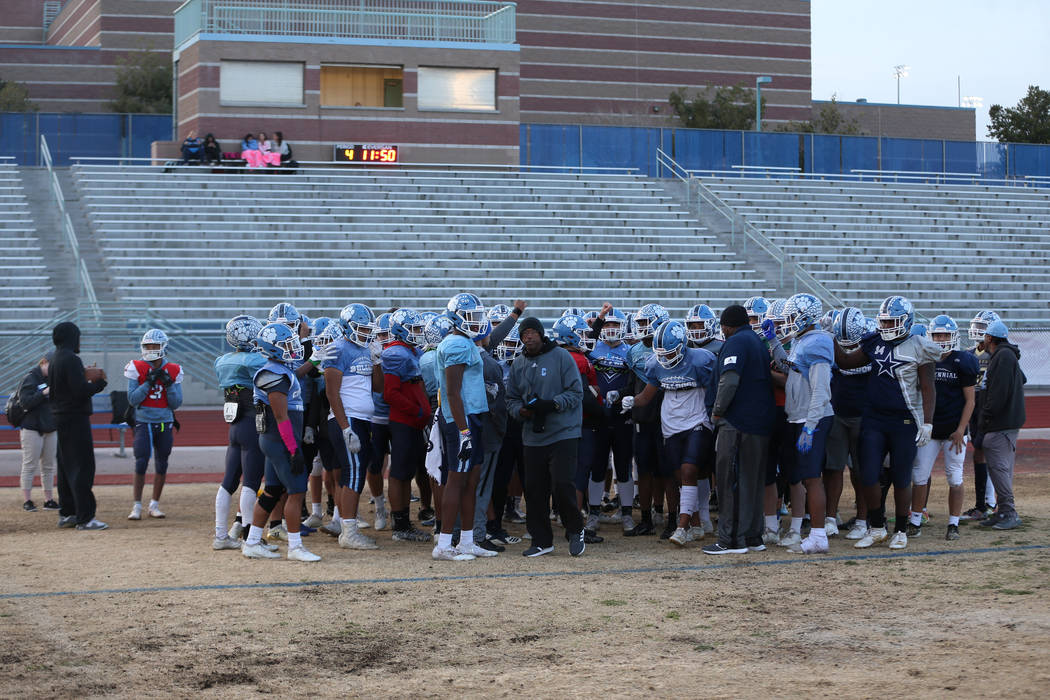 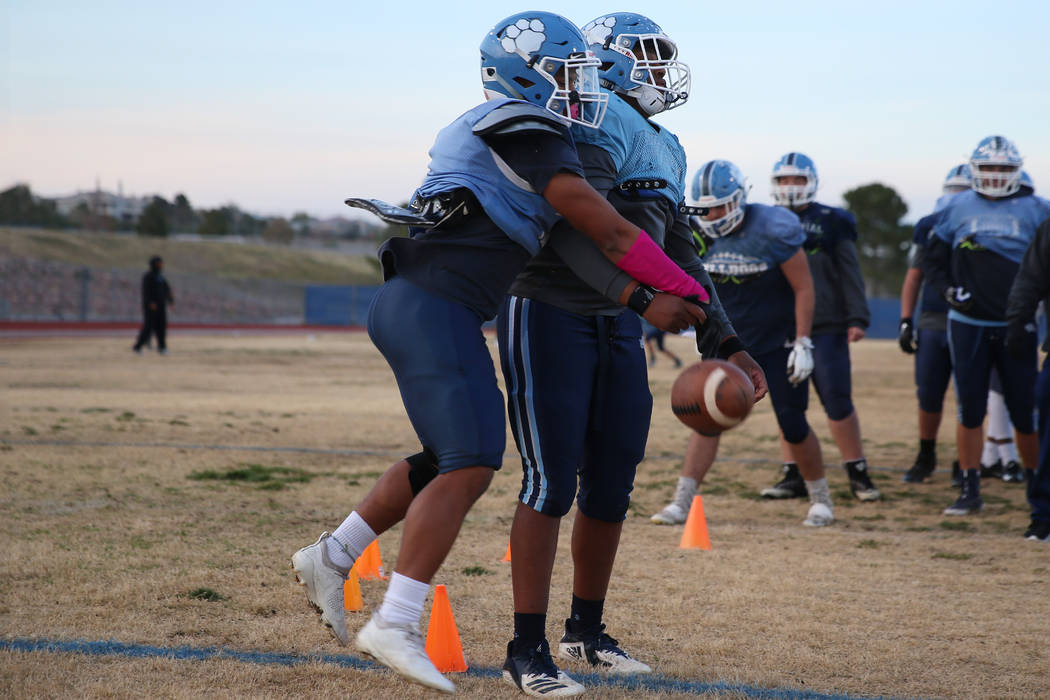 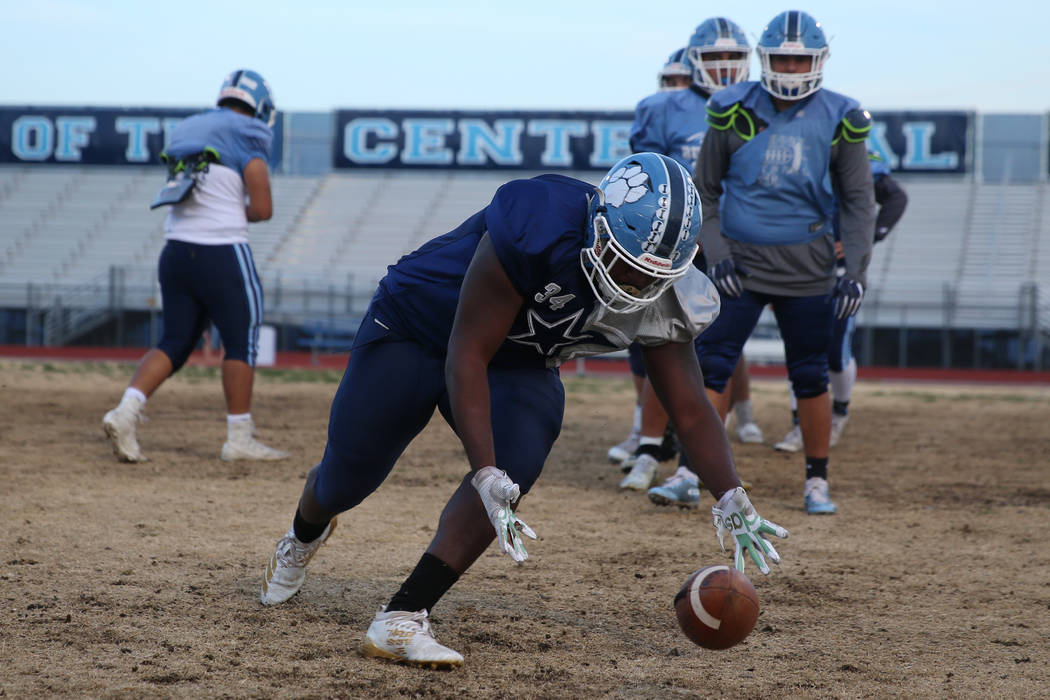 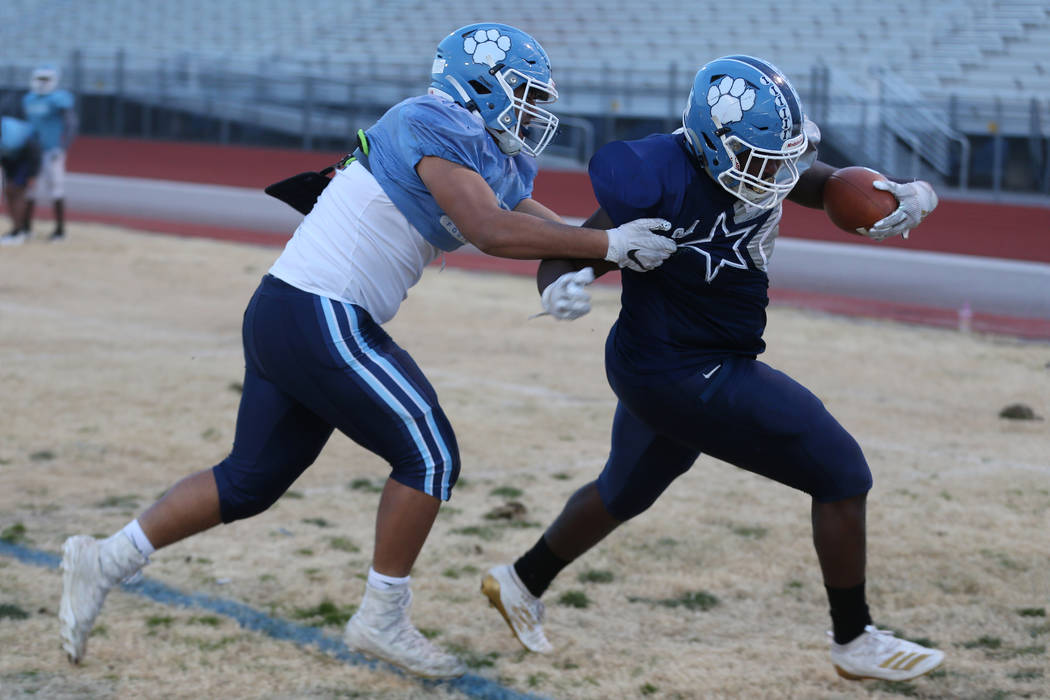 Early in his high school football career, Jordan Smith just wanted to get the ball and run — and usually to the outside.

At 5 feet, 9 inches and 180 pounds, the Centennial running back isn’t big, so he figured his best avenue to success was to turn the corner and use his speed. Smith has plenty of that, as anyone who has tried to track him down can attest, but much of the senior’s success this season has stemmed from learning to slow down.

“We’re a zone team, whether it’s our inside zone or our outside stretch,” Centennial coach Dustin Forshee said. “With zone, it’s slow to (the hole) and quick through. We preach patience, find the hole. Once you get past it, now you’ve got that linebacker at the second level, then do your speed and open-field stuff.”

Smith’s running behind a tough offensive line is one of the main reasons the Bulldogs (12-1) have reached unprecedented heights in school history. They will face Liberty (9-5) for the Class 4A state championship at 12:10 p.m. Saturday at Sam Boyd Stadium, the first time Centennial has reached the title game.

Smith has rushed for 1,711 yards and 24 touchdowns and eclipsed the 100-yard mark eight times. He has two games with four rushing touchdowns, and he’s popped at least one run of 50 yards or more in six games.

Most important for the Bulldogs, he’s been durable. Smith carries the ball about 20 times per game, and he also has 15 catches for 271 yards and two scores, including a 95-yarder in a 17-14 win over Arbor View.

“I’m in track and field, so running is my everything,” Smith said. “Getting the ball 20-plus times means more to me than just stats. It means the coaches trust me to keep the team on the field and the ball away from (our opponent). I really appreciate being able to touch the ball 20, 25, 30 times.”

Smith gives all the credit to his offensive line and said his patience has come with experience. Some of that experience is “having to rep the same play over and over and over for three straight years.” Smith’s linemen appreciate the fact that he’s not “running downhill into (their) back” anymore.

Forshee was an offensive lineman at UNLV and said Centennial offensive line coach Sam Norris has molded that unit with a simple focus.

“We’ve got six guys that play offensive line. We’re not deep, but they’re six guys that have taken a ton of reps,” Forshee said. “They’re super tough. That’s where I think the mentality of Coach Norris has rubbed off. To have him be with these kids for three years has allowed him to preach toughness and really perfect what to do offensively.”

Smith getting the ball so often also allows him to be patient in terms of game flow. Early in games, when defenses are fresh and energized to stop the run, holes might be hard to find. But as the game progresses and linemen start to wear down their opponents, that’s when the running game takes over.

That was apparent in the Arbor View game, when Smith had negative yardage after seven carries. But Smith’s 55-yard touchdown run with 5:24 to play gave the Bulldogs a two-score lead and proved to be the game-winner.

“We all get frustrated at times, but we’ve all bought into what our coaches do for us,” left guard Omar Lopez said. “We just stick with the game plan and eventually it starts working how it’s supposed to and gives us some big plays.”

Against Desert Pines in last week’s state semifinals, the Bulldogs didn’t pop any of those electrifying runs. But they kept the chains moving and frustrated the Jaguars’ front seven that includes several Division I recruits.

Smith ran for five first downs in the fourth quarter, which limited Desert Pines’ chances to come back in a 20-7 loss to Centennial.

“That game was our most satisfying,” Bulldogs right guard Denzel Brown said. “When it comes to those Division I athletes, they look at us like we’re no one. We look at it like we’re underdogs, so we have something to prove. It motivates us to work 10 times harder so we’re prepared. When it comes to game time, we know what they’re going to do before they do it.”