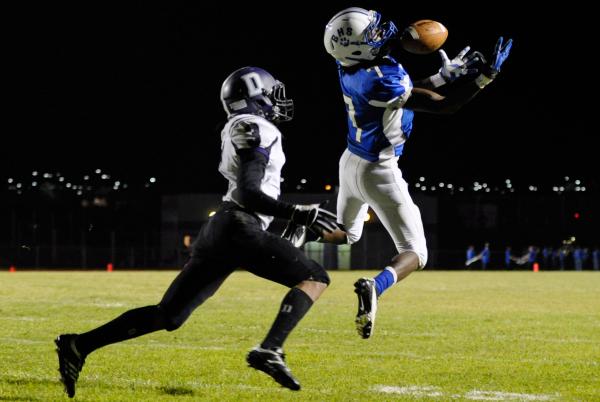 Back in his native Louisiana, Boyd could chat up just about anyone. But he didn’t know whether the students at Basic would welcome him. Or make fun of his accent.

So, for much of his freshman year, it was pretty much crickets.

“I didn’t talk to anyone,” Boyd said. “I had to get used to it. Down South is way different from the West Coast, how people act and stuff like that.

“Once people found out that I was good at football and could play basketball … that kind of broke the ice.”

After being sent to the Las Vegas Valley in 2009 to escape the post-Hurricane Katrina violence in New Orleans, the self-conscious  — not to mention tongue-tied — freshman blossomed into one of the top football prospects in the state.

On Wednesday, the standout wide receiver signed a national letter of intent with UNLV, capping a journey filled with triumph and tragedy.

“He’s a very mature kid. He’s been through a lot,” Basic coach Jeff Cahill said. “His family being displaced. The city he grew up in being gone basically. It just builds character I think.”

Boyd was raised in Marrero, La., a suburb of New Orleans located on the west bank of the Mississippi River. When Katrina made landfall on the morning of Aug. 29, 2005, Boyd and his mother, Landa, evacuated west to Spring, Texas.

After a few months there, Landa Boyd said she and her son briefly stayed with family in Vacherie, La. — approximately 50 miles west of New Orleans — before making their way back to Marrero, which still was underwater from the flooding and awash in violence.

“We lost everything,” Landa Boyd said.

As a result of the family’s struggles, Landa Boyd said her brother Kevin brought up the idea of taking in Devonte. And after Devonte’s best friend was killed when Boyd was in junior high, he wanted out, too.

“When he first asked to get away, I didn’t want to let him leave,” Landa Boyd said. “But with all the stuff going on here after the storm, I decided to let him come up there. It was the best thing I could have done.”

Devonte Boyd moved to Henderson prior to his freshman year to live with his uncle, whom he had met on only a handful of occasions.

“We bumped heads a couple of times,” Devonte Boyd said. “But I honestly think him being there and guiding me the right way, it really helped me a lot.”

Boyd enrolled at Basic after the start of the football season and played junior varsity his first year before being called up to the Wolves’ varsity squad for the postseason.

“We knew he was going to be a special player,” Cahill said.

Boyd’s 18 touchdown receptions also were the best in the area.

“He’s a real long, tall, angular guy who’s shown a real ability to go up after the ball,” UNLV coach Bobby Hauck said during a news conference to announce his fourth recruiting class. “When you watch his senior-year tape, sometimes he doesn’t have a ton of catches because every defense I saw him play against was tilted his way. They were bound and determined not to let him beat them.”

Boyd grew up rooting for Louisiana State, and his mom tried to convince him to return to the South when it came time to choose a college. He decided to stay in his adopted hometown, though, selecting UNLV over San Diego State.

Boyd joined Liberty running back Niko Kapeli as the only local players to sign with the Rebels on Wednesday.

“I know a lot of good kids from Vegas don’t go to UNLV. They’ll go to a different state,” Boyd said. “I want to be that one kid that stayed and made …  a whole different generation want to go to UNLV.”

Boyd said he returns to Louisiana whenever he has a break from school. He said he misses Southern cooking but has no regrets about moving away at the age of 14.

“I miss my mom, and I miss my family, but I don’t miss the whole environment,” Boyd said. “I think this is way better. It’s basically home.”