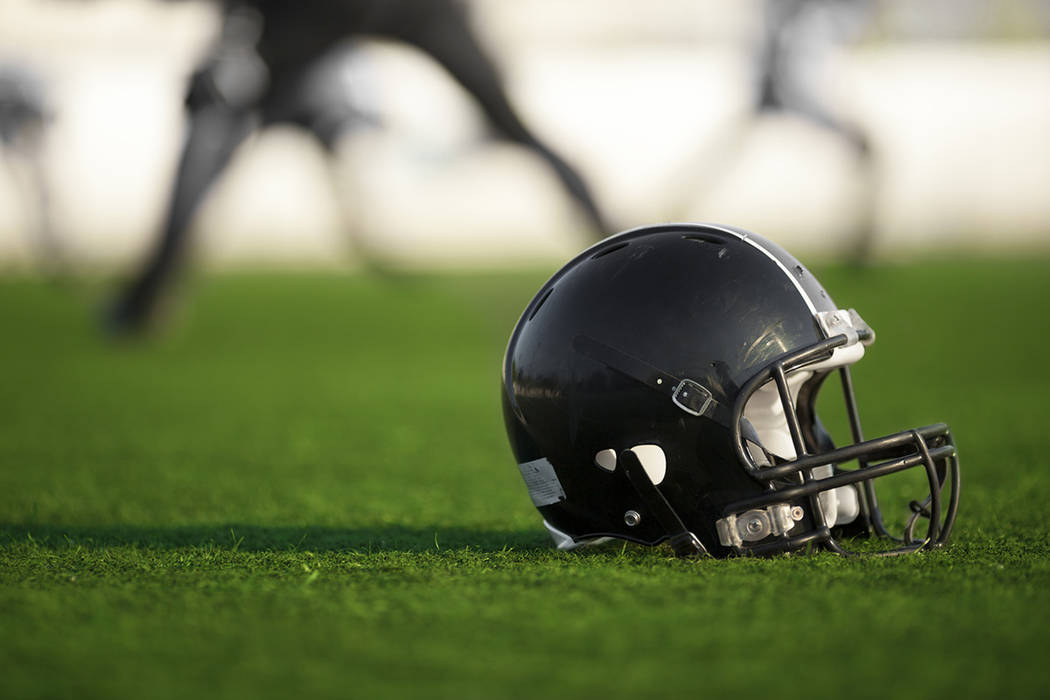 Bishop Gorman coach Kenny Sanchez held his hand in the air to pause his offense and checked his watch. When he was ready to go, he spun his finger in the air.

For the first time all season the Gaels were in clock-killing mode and Sanchez made sure to take every second off the clock he could in the fourth quarter against Orem (Utah). As a result his team went on a 5 minute, 41 second touchdown drive late at home Friday to seal a 31-21 win, Gorman’s first of the season.

“Our backs (were) against the wall,” running back Amod Cianelli said. “We had to get it done.”

The Gaels (1-2) came into the game 0-2 for the first time since 2005 but showed they still have plenty of talent. They ran 27 more plays than the Tigers, the second-best team in Utah according to MaxPreps, outgained them 356-303 and forced three turnovers and two safeties.

“We’ve been down for a little bit but as a brotherhood we came together and we were able to overcome some adversity,” Cianelli said. “It feels good.”

Quarterback Micah Bowens threw for 223 yards and had a rushing and passing score to lead the Gaels. Gorman also got 78 receiving yards from Donovan Smith and 68 rushing yards from Cianelli.

Tigers wide receiver Puka Nacua was the star of the game though with 258 receiving yards on nine catches and three touchdowns. Orem (2-2) gained 45 yards on the 32 plays that did not involve the Southern California commit catching a pass.

“Nacua, wow,” Sanchez said. “What a really good football player that kid is. Sometimes it was just toss and catch. He was just better than a lot of people.”

Despite Nacua’s heroics the Gaels got into the victory formation for the first time this season after early setbacks against Mater Dei (California) and Centennial (Arizona). The team still has one more tough nonleague test in De La Salle (California), but Sanchez was impressed with the resiliency of his squad Friday.

“Our whole thing was we weren’t going to go out and make a schedule that was going to be easy for us or to make my record look cool,” Sanchez said. “It was going to be to build our team to be better no matter what.”

Desert Pines 33, Bishop Manogue 20 — At Reno, senior running back Cameron Wiley rushed for 190 yards and a pair of touchdowns as the Jaguars beat the Miners.

Wiley, who ran for 70 yards in the opener against Durango, scored from 35 yards out in the first quarter to help Desert Pines take a 14-0 lead. The Miners rallied to tie the game, but senior speedster Devin McGee scored three touchdowns to help the Jaguars pull away.

Sunrise Mountain 24, Democracy Prep 13 — At Sunrise Mountain, the Miners and Blue Knights combined for 11 turnovers, including five in the first quarter, but the hosts finally prevailed.

The difference was Sunrise Mountain played a clean fourth quarter while the visiting Blue Knights fumbled on back-to-back drives late in the game to seal their fate.

Sunrise Mountain (1-2) slogged along in the first half, turning the ball over four times (two turnovers on downs, interception, fumble) before quarterback Tyree Hayes ran and passed the Miners to victory in the second half.

The pivotal sequence of the game came late in the fourth quarter. After the Miners took a 16-13 lead, the Blue Knights began marching downfield. A 41-yard completion from Micah Gayman to Kelley Jones put the Blue Knights inside of the red zone with less than five minutes remaining in the game.

Moapa Valley 48, Eldorado 12 — At Eldorado, the Pirates used a potent rushing attack to cruise to victory over the Sundevils.

Moapa Valley scored early and often, building a 41-0 lead at the half thanks to that run game and two touchdown passes from quarterback Luke Bennett to wideout Chase Hoy.

Eldorado struggled to gain traction on either side of the ball, falling behind 48-0 in the third quarter before scoring for the first time.

Quarterback Jalen Malone led the Sundevils, throwing for 85 yards and two touchdowns and rushing for 35 yards.

Virgin Valley 60, Western 6 — At Western, the Bulldogs, the top-ranked team in Class 3A, looked the part Friday at Western, scoring 28 points in the first quarter en route to a road win over the Warriors (0-3).

“We’ve played a lot of good quarters, we’re young,” Woods said. “But we’ve made a lot of mental mistakes. We just wanted a game where penalties weren’t bad. We got that complete game.”

Wyatt Delano rushed for more than 12 yards a carry, going for 136 yards and scoring twice. Koden Tietjen and Cameron Noel each scored twice as well for the Bulldogs.

Jake Hampsten opened the scoring with a 41-yard reception from Meb Hollingshead, which was quickly followed by a Delano 4-yard TD run following an interception on the ensuing Warrior possession.

Another interception on the next possession led to Noel’s 4-yard touchdown run. Things went from bad to worse for the Warriors, who fumbled the ensuing kickoff, leading to a Shawn Rodriguez 1-yard scoring run.

Tietjen hauled in a 27-yard touchdown pass from Hollingshead for the Bulldogs, before the Warriors finally got on the board with Jeremiah Towns rushing 66 yards for the score.

Noel quickly got the touchdown back, however, scoring from 90 yards on the kickoff. A number of Bulldog backups then were inserted, including Will Barnum, who scored on a 41-yard run to round out the first half.

Delano came back in the game to start the second half, and scored on a 17-yard run on he Bulldogs’ opening drive. Tietjen then recovered a dropped lateral in the next possession to round out the game’s scoring.

Calvary Chapel 36, GV Christian 0 — At Calvary Chapel, Drake Miller passed for 147 yards and two touchdowns to lead the Lions over the Guardians.

Miller also rushed for a touchdown as the Lions (1-0) won their first game of the season.

Calvary Chapel set the tone for the contest by scoring on the second play of the game as Miller connected with Kade Sellers on a 34-yard touchdown pass for a quick 7-0 lead.

The Guardians (0-3) had trouble moving the ball against a very stingy Lions defense, and after giving possession back to Calvary Chapel, the Lions quickly took advantage on a 50-yard touchdown run by Marquis Arnold for a 14-0 lead at the end of the first quarter.

GV Christian quarterback Collin Killoran provided flashes of offense as he led the Guardians with 33 rushing yards and 18 passing yards but, the Lions defense was able to keep the Guardians out of the end zone.

Miller was more successful as he was able to connect with Paul Yoo on a 48-yard touchdown pass just before the half, and a successful 2-point conversion made it 22-0 at halftime.

Calvary Chapel added a 15-yard TD run by Miller, and a 50-yard scoring run by Sellers in the second half.

SLAM Academy 28, Lake Mead 0 — At Lake Mead, Isaiah Golden rushed for 200 yards and two touchdowns to lead the Bulls past the Eagles.

SLAM Academy’s defense forced three turnovers and limited the Eagles to 121 yards of total offense to pick up the shutout. The Bulls picked off two passes and recovered one Lake Mead fumble, with two of those turnovers coming on the Eagles’ first two plays from scrimmage in the second half.

Golden ripped off a 22-yard run on the game’s first play. After the Bulls’ first foray into the Lake Mead red zone ended with a lost fumble at the Eagles’ 1-yard-line, Golden was able to cash in on the Bulls’ next possession, bulling his way in from 6 yards to open the scoring late in the first quarter.

Golden’s next score, from 16 yards out in the third quarter, effectively put the game on ice for the Bulls (2-0).

Hunter Auschwitz rushed for 63 yards to lead the Eagles (0-1).

Needles 38, Parker (Arizona) 8 — At Parker, Arizona, Marcus Turner rushed for 195 yards and three touchdowns on 12 carries to lead the Mustangs over the Broncs.