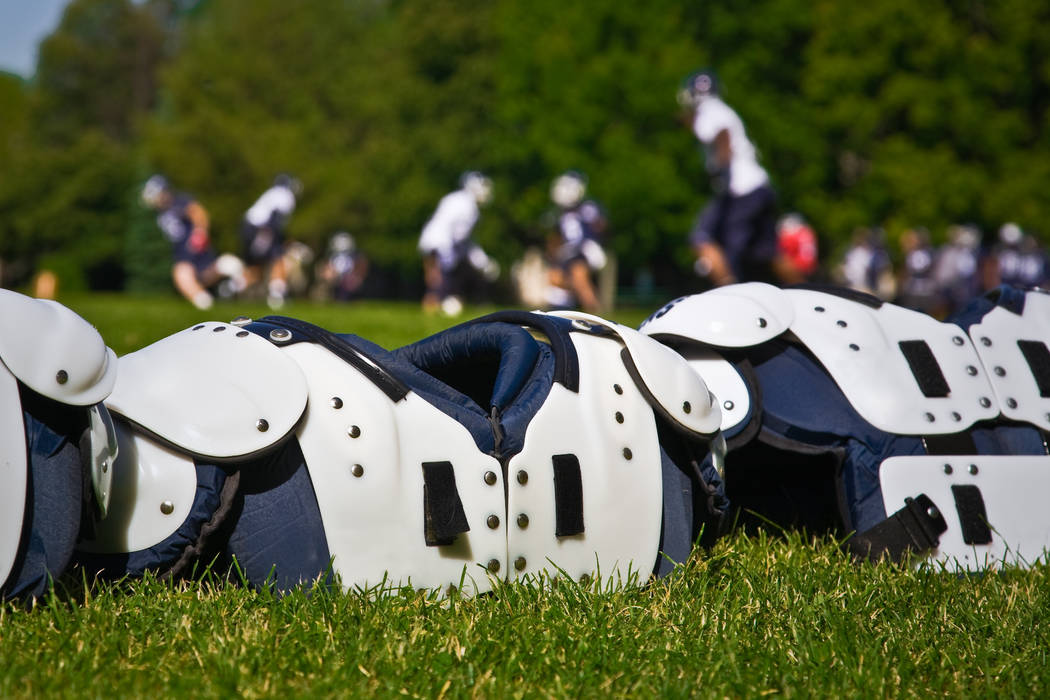 Neither Chaparral nor Basic ever found the end zone Friday night, but the Cowboys found just enough offense when they needed it.

Dennis Perez kicked field goals of 24 and 33 yards in the final three minutes to lift Chaparral to a 6-3 win in a Southeast League slugfest.

“This was big. No. 1, it lets us feel like we’re a playoff contender,” Chaparral coach Don Willis said. “We didn’t want to go to 0-2. That’s a tough hill to climb.”

Perez’s first field goal tied the score with 2:50 to go, and Meshach Hawkins recovered a fumble caused by Wesley Tauiliili. That set up Perez’s second kick that turned out to be the game-winner with a minute remaining for the Cowboys (5-2, 1-1).

Steve Torres intercepted a pass from Basic (2-5, 0-2) on its final drive. Hawkins rushed for 90 yards on 17 carries to pace the Chaparral offense.

Arbor View (5-2, 2-1 Northwest League) blocked two field goals, including the Spartans’ overtime attempt, and an extra point. Daniel Mitchell had 175 yards and a touchdown on 13 carries, while Darius Washington added 100 yards and a score on the ground.

The game was delayed for about 25 minutes before the extra session began due to an injury sustained by Cimarron-Memorial quarterback and free safety Branden Smith on the final play of regulation. Smith reportedly had feeling in all of his extremities when he was taken off the field.

Desert Pines 49, Canyon Springs 14 — At Canyon Springs, Jovantae Barnes rushed for about 150 yards and two touchdowns, and the Jaguars ran away in the second half to stay unbeaten.

Darius Stewart had a 48-yard touchdown run for the Jaguars (5-0, 1-0 Northeast League), who also received scoring receptions from Deandre Moore and Branden Thomas. Will Patton added an 80-yard interception return to paydirt.

The Pioneers (0-5, 0-1) received 100 all-purpose yards from Martin Blake, including a 35-yard rushing touchdown. Donzamon Lewis Baker threw a touchdown pass in the loss.

Kendric Thomas caught a 25-yard touchdown pass from Koy Riggin for Foothill (6-1, 2-0), which will travel to meet Liberty in a showdown for first place next week. Vyron Wallace scored on a 35-yard fumble recovery and intercepted a pass, while Tofa Wilson had five sacks, three forced fumbles and a blocked punt.

Coronado (3-4, 0-2) twice got within one score but never got even after falling behind 13-0 in the first quarter.

Jalen Lockett and Aramonte Schneider caught scoring strikes of 85 and 69 yards, respectively, for Eldorado (1-5, 1-0 Northeast League), which scored 20 points in the first quarter and held on from there. Lockett also had one of the Sundevils’ four interceptions.

Bishop Gorman 68, Sierra Vista 0 — At Sierra Vista, Micah Bowens rushed for two touchdowns, and Jadyn Ott ran for a score and returned a kickoff for another in the Gaels’ win.

Sebastian Shannon also scored a pair of touchdowns for Bishop Gorman (6-1, 3-0 Southwest League), who also received scores on a reception from Rome Odunze and a Jaden Hicks interception. The Gaels scored 40 points in the first quarter and intercepted Sierra Vista (0-8, 0-4).

Shadow Ridge 49, Bonanza 23 — At Bonanza, Cameron Woods returned an interception for a touchdown to give the Mustangs an early two-score lead, and they cruised to the win.

Six different ball-carries accounted for just more than 300 yards for Shadow Ridge (3-3, 2-1 Northwest League). Zedekiah Henderson also returned an interception for a score. Shadow Ridge coach Travis Foster said it was an ugly win, and singled out Shemarion Bellegrade from Bonanza (1-6, 0-3) as a “stud” and “we didn’t have an answer for him.”

Boulder City 15, Moapa Valley 12 — At Moapa Valley, Toby Schaper had an 80-yard interception return for a touchdown with 1:57 left in the game, the decisive blow in the Eagles’ Sunrise League comeback win.

The Pirates (5-3, 2-1) led 12-2 before Dakota Christian ran for an 8-yard touchdown. Christian also had an interception for the Eagles (5-2, 2-1), who opened the scoring with a first-quarter safety.

Sunrise Mountain (3-4, 2-1 Sunrise League) allowed a blocked punt that was returned for a touchdown as part of the Rams’ 17-point first quarter. Rancho (1-7, 0-3) also scored a rushing touchdown and an Evan Vollmoeller 27-yard field goal in the opening frame but was blanked the rest of the way.

Valley 35, Democracy Prep 0 — Valley stepped out of league play and picked up its second straight shutout.

Lincoln County 32, Calvary Chapel 27 — At Lincoln County, Cody Zile threw for 167 yards and three touchdowns, and the Lynx held off a late rally.

Dylan Robinson had 100 yards and two of the touchdown receptions for the Lynx (4-2, 2-0), who led 32-14 after the third quarter. Calvary Chapel (0-6) had two fourth-quarter touchdown passes in the fourth quarter but couldn’t pick up its first win.